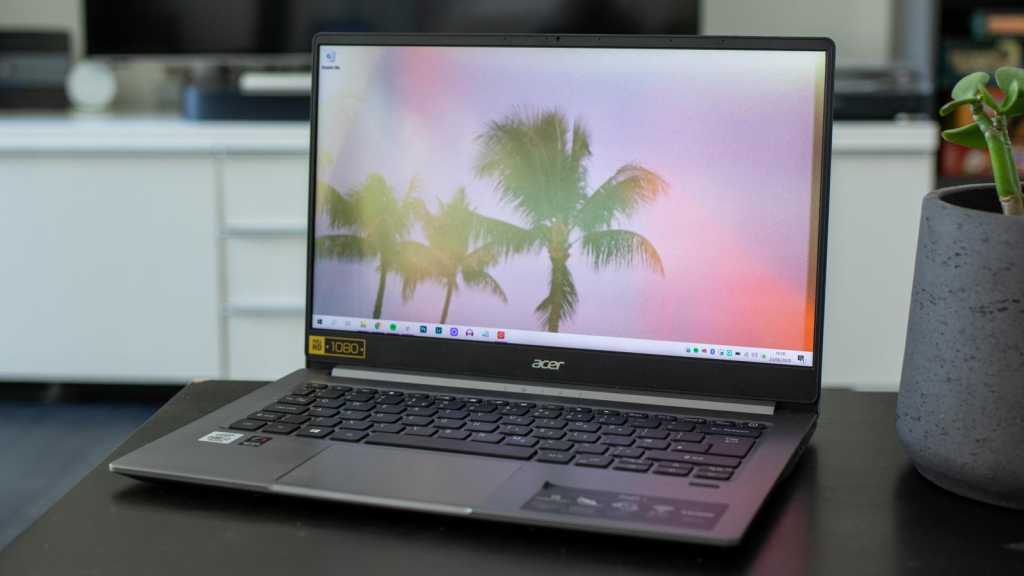 Function trumps form in the Swift 3 SF314-57, a budget-friendly ultrabook that’s deceptively powerful and lightweight for its plain design.

Acer’s Swift laptops are all about one thing: being lightweight. Design, performance, battery and more are all considerations of course, but when push comes to shove the priority is keeping weight low.

That makes the catchily named Acer Swift 3 SF314-57 (not to be confused with the cheaper Swift 3 SF314 from earlier this year) an excellent choice for portability – and for plenty of power at a decent price – but you’ll have to make compromises elsewhere, especially on aesthetics.

Design and build: Function over form

The Swift 3 is slim, light, and not very pretty.

At just 1.19kg the weight is the first thing you notice about the laptop, and over two weeks I never really got over how light it feels every time you pick it up. This would feel light for a 13in laptop, so the fact that it weighs this little while squeezing in a 14in panel is a real achievement.

It helps of course that it’s fairly slim at 16mm, though in fact you can find thinner laptops elsewhere. They probably won’t pack ports like this though, with space for power, HDMI, two USB-A, one Thunderbolt 3/USB-C (a particular rarity below a grand), a headphone jack, and a lock slot.

More likely it’s the magnesium aluminium alloy chassis that does the heavy lifting in saving you from heavy lifting. The downside is that it can’t help but feel rather plain, an uninterrupted matt grey that’s unlikely to inspire strong feelings in anyone, and even feels a bit like plastic to the touch.

There’s a similar effect from the display, which boasts fairly slim bezels on the sides, but a pretty chunky one below the screen, all made out of a plastic that looks more functional than anything else.

The display itself is a 1080p LCD that looks decent, though won’t match the 4K or AMOLED panels you might find in laptops that cost a little more. Viewing angles are a little limited, but the colour range is good and brightness is an unexpected strength, in part thanks to the matt finish, making it comfortable to use even in direct bright sunlight.

It’s a similar story elsewhere. The backlit keyboard and plastic trackpad both get the job done, but neither are anywhere near best-in-class. A fingerprint scanner below the keyboard offers secure access, but is slower and less reliable than you’ll find in Dell or Huawei’s recent offerings.

The speakers are thin and tinny, and worst of all are downfiring, meaning they’ll be muffled beyond hope if you try to use this on your lap or the bed, rather than a desk. Good laptop speakers are rarer than gold dust though, so I won’t hold that against Acer too much.

At the end of the day it’s a question of priorities. The Swift 3 is one of the lightest laptops you’ll find at this price – especially for the power it packs – so if function trumps form in your books then you needn’t really look much further. But if you want a PC with pizazz, this ain’t it.

This is where Acer’s priorities begin to become clear. The Swift 3 may not look like much, but you’ll struggle to find much better pound-for-pound performance.

The model I reviewed, and the one you’re likely to find in the UK, is powered by an Intel Core i7-1065G7 CPU, 8GB RAM, and a 512GB SSD – the sort of specs you’d normally find in top-end flagship models elsewhere, and rarely below a grand. Throwing in Bluetooth 5.0 and Wi-Fi 6 support doesn’t hurt either.

SKU variations that you may find, especially in other countries, include a slower Core i5 processor, 16GB RAM, a 1TB SSD, or an Nvidia GeForce MX350 GPU – a worthwhile upgrade for anyone hoping to game or do creative work, though the integrated Iris Plus graphics will serve well enough for everyone else.

Unsurprisingly, with those specs our review unit of the Swift 3 holds its own against the flagships in our performance benchmarks, matching – or at least coming close to – laptops that in some cases are almost double the price.

It’s worth noting though that it also performs similarly to the AMD-powered Huawei MateBook D 14 – a similarly sized laptop that weighs a little more, but at £650 costs even less than the Swift 3. Unless the 200g weight difference is a dealbreaker for you, the MateBook beats Acer at its own game in terms of performance for price.

As for battery, the Swift 3 veers firmly back into the middle of the road. The 4200mAh battery will just about last for a day of light use, but you’ll probably get a bit nervous by the end, while it lasted 12 hours in our non-stop 720p video test. At least it charges back up quickly – it topped up by 44% in half an hour – the third-fastest charging we’ve seen in a laptop so far this year.

At £849.99, the model I reviewed – and the one widely available in the UK, from Amazon and Argos – represents fairly undeniable value for money compared to 2020’s flagship launches, and highlights that what you really pay for at the top-end are design and display quality.

For pure performance the Swift 3 SF314-57 punches well above its weight, and the port selection and lightweight design will win over anyone who travels for work. As long as you can look past the fact that it isn’t much of a looker, there’s not much to complain about.

The only real wrinkle is that Huawei’s 2020 mid-range devices go one step further. The MateBook D 14 – and very similar Honor MagicBook 14 – match the Swift 3 on performance and ports, so might be a better buy for anyone who doesn’t need the absolute lightest laptop out there.

At this price point, picking a laptop is all about priorities and compromises. The Swift 3 SF314-57 if your priorities are portability, power, and ports. It’s not if you care more about design, keyboard & trackpad performance, or display quality.

In reality, Acer’s priorities probably line up nicely with most laptop buyers’ – especially business users – but design is likely to be the sticking point for many. The Swift 3 looks fine, but functional, and is a laptop to use rather than show off. You know if that’s a problem for you or not.