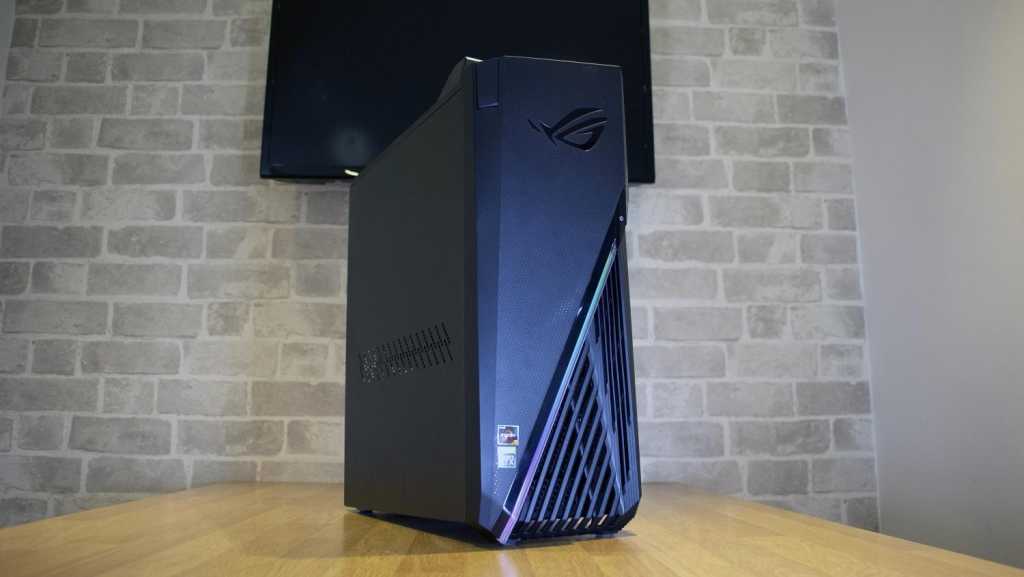 A speedy eight-core CPU offers more processing power than rivals, fast GPU and some other decent specs make this Asus tower attractive. However, this PC has middling build quality and lacks any real upgrade paths.

It’s all too easy to dismiss desktops like the Asus ROG Strix G15DH. Big-brand, high-street hardware has a reputation for being slow, expensive and badly-built – especially when compared to PCs from specialist firms like Chillblast and PC Specialist.

The latest Asus rig looks to buck that trend by including a high-end Nvidia RTX graphics card and an eight-core AMD Ryzen CPU for £1,400. Well that’s the model we’ve tested although there are other models available we’ll cover in the price section later.

The G15DH (also known as the GA15) looks unmistakably like a Republic of Gamers product. The front panel is decorated with a huge ROG logo, and it has jutting angles of plastic and a huge slash of RGB LEDs across the centre.

There’s more angled plastic on the roof alongside a useful handle, and the front panel has a handy headphone hook. At the front, you’ve got a full-size USB 3.2 port alongside a Type-C connection; at the rear, there are six USB 3.2 ports but no Type-C and only three audio jacks.

The G15DH’s 10kg weight isn’t bad, and this machine is only 189mm wide – so it’s not too difficult to move around. It’s a good start, but hands-on time reveals issues. On the outside, there’s poor build quality: the plastic front and roof panels and the metal side panels are both flimsy.

On the inside, there’s little to excite. The plain metal is not painted and the wires are untidy throughout, which is partly why the side isn’t transparent.

The CPU cooling is basic, the graphics card is a reference model with no ornamentation and there’s no side panel window. You don’t get any upgrade room from the case, with no 2.5in or 3.5in drive mounts.

The Asus is not really meant to be opened – the side panels don’t even have thumbscrews. Instead, this big-brand rig is only really designed to be seen from the outside in a plug-and-play style.

The G15DH’s rivals are better in this respect – they’re stronger and with more upgrade room. If you never plan to open your PC, it’s less of an issue, but it’s worth considering if you want to improve your build in the future.

The Nvidia GeForce RTX 2060 Super is an excellent graphics card. It’s got Nvidia’s latest Turing architecture, which means Ray-Tracing – and this GPU has 34 dedicated cores. Elsewhere, the GPU has 2,176 stream processors, 8GB of dedicated memory and stock speed base and boost clocks of 1,470MHz and 1,650MHz.

The GPU is joined by an AMD Ryzen 7 3700X processor. It’s a versatile chip: it has the superb Zen 2 architecture, eight cores that support sixteen threads, and a base clock of 3.6GHz that boosts to 4.4GHz.

The specification is rounded out by 16GB of 3,000MHz dual-channel memory, a 256GB WD SN520 M.2 SSD and a 2TB hard disk. Connectivity is handled by Gigabit Ethernet and wireless, but the 802.11ac chip is an entry-level, single-channel solution that’s only suitable for mainstream gaming.

The motherboard is underwhelming, too. It’s a basic model, with no spare memory, PCI or M.2 connectors. It has no attractive ornamentation or other high-end features, and no beefed-up, gaming-grade audio. It’s fine for mainstream use, but it’s another indication that this PC is never really intended to be tinkered with.

The Asus’ GPU and CPU are impressive – certainly better than those in the cheaper Chillblast Fusion Sorcerer. However, the G15DH’s other rivals are competitive on paper: the PC Specialist Fnatic has the same CPU, a comparable AMD GPU, more storage space and a better motherboard. AlphaBeta’s i5 RTX system has a middling CPU, but a more powerful RTX 2070 Super graphics card and another superior motherboard.

The G15DH’s RTX 2060 Super is very fast. With Warhammer 2, Ghost Recon: Wildlands and Deus Ex: Mankind Divided at Ultra settings and at 1080p, its averages ranged between 61fps and 86fps. That’s rapid – it means that any single-player game will run smoothly at 1080p and that you’ll be able to handle esports titles on 144Hz and 240Hz displays.

The Asus ran well at 1440p, too, with Ultra-quality averages that still ranged between 48fps and 62fps. This graphics card will be able to handle that resolution and widescreen panels. Only 4K is out of its reach.

It’s good pace, but some of the G15DH’s rivals are quicker. The AMD Radeon RX 5700 XT inside the pricier PC Specialist delivered 1080p averages between 65fps and 90fps, so it’s a few frames faster – albeit without any of Nvidia’s Ray-Tracing. It’s also 500 points faster in 3D Mark Sky Diver.

The real frontrunner here is the AlphaBeta’s RTX 2070 Super. That machine’s 1080p averages sat between 70fps and 95fps. It’s not a huge gulf, but it will provide you with more gaming grunt for longer.

The G15DH comes into its own in CPU benchmarks. Its Geekbench 4 result of 31,919 is excellent: around 10,000 points better than the Chillblast and AlphaBeta machines, with their mid-range CPUs. It’s also 2,500 points faster than the PC Specialist, which had the same CPU paired with an AMD GPU.

Its PC Mark 10 score was similarly dominant, and the SSD’s read and write speeds of 1,729MB/s and 1,298MB/s. They’re not the fastest speeds, but they’re quicker than any SATA drive or hard disk and keep the machine feeling responsive.

These good CPU scores mean the G15DH is more versatile than rivals. There’s enough CPU power here to handle photo-editing and video work as long as you don’t want to tackle 4K content, and there’s plenty of encoding and content-creation ability. Office apps will run smoothly, and there’s loads of scope for multi-tasking.

It’s a good thermal performer, too: the G15DH’s internal temperatures never hit dangerous levels, and noise levels are modest, even during gaming. It’s just as quite as any rival, and the noise is easy to mask.

The ROG Strix G15DH we’ve tested comes in at £1,399, although Amazon has it for a lower price, at £1,199 (once it’s back in stock). The Asus also includes a keyboard and mouse set that’s good enough for mainstream gaming.

That’s the model we’ve tested but you can get the G15DH is some much cheaper configurations, starting at just £849 if you’re happy with Ryzen 5 and GTX 1650. Jump to a GTX 1660Ti for £949 on Amazon at the time of writing, which is a nice balance of price and specs. John Lewis also has the machine starting at £899 with a GTX 1660.

The Asus is protected by a standard one-year warranty. It’s a reasonable deal for a high-street machine, but its rivals do offer lengthier and more personalised protection.

Check out our chart of the best gaming PCs.

The Asus ROG Strix G15DH offers an impressive amount of power for its price. The CPU is the star: the eight-core AMD chip will handle the vast majority of work tasks, including photo- and video-editing, and it’s faster than any rival.

The GPU is good, with ample power for 1080p and 1440p gaming and any esports title. The G15DH has ample memory and storage, and its case offers some neat features – like its handle, headphone hook and RGB LED lighting.

This big-brand PC does suffer elsewhere. The motherboard and connectivity are underwhelming, and the case has inconsistent build quality and few upgrade routes. And, while the GPU is fast, some rivals are quicker.

If you want more gaming speed, more upgrade routes or a lower price, then one of those rivals will be better: the Chillblast is cheaper and more accessible while the AlphaBeta offers more graphical grunt.

However, there’s still a place for the G15DH. If you need loads of CPU power it’s a great option, and it’s also ideal if you’re not fussed about future upgrades – and if you’d rather stick with a big-brand.