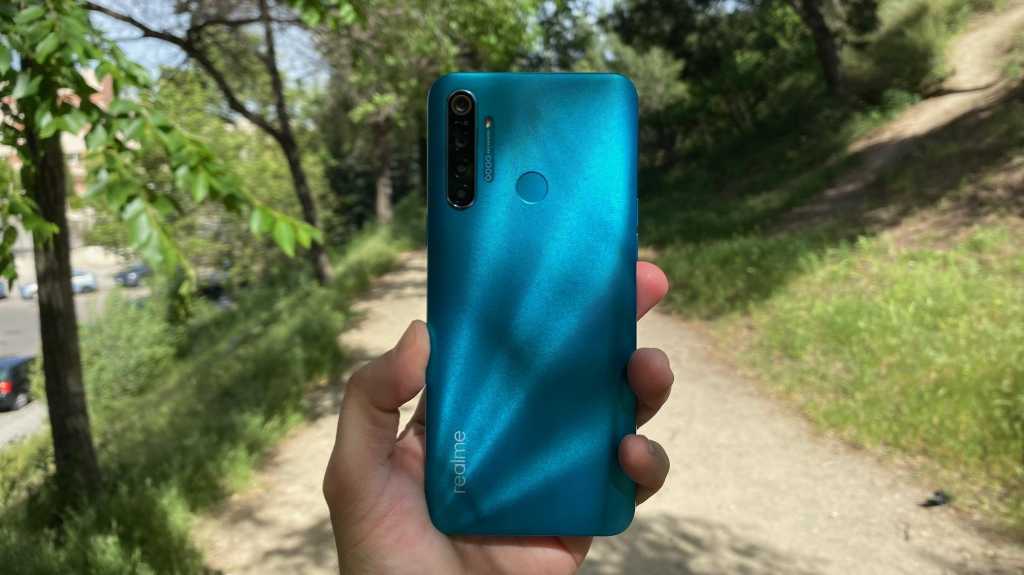 The Realme 5i’s huge 5000mAh battery, solid performance and attractive design make it a real budget contender, but you’ll have to be willing to make some sacrifices.

If you’re reading a review of the Realme 5i, it’s obvious you’re interested in knowing what a phone at this price point is capable of, particularly when expectations are so high.

Before we begin, it’s worth pointing out that the Oppo sub-brand has many similar models already on the market, such as the Realme 5 Pro, Realme 5s and regular Realme 5.

In order to stand out from the competition, the Realme 5i comes with a huge battery that can last for two days of intense usage, alongside a Snapdragon 665 processor and five cameras across the front and rear.

Physically, the 5i is very similar to the regular Realme 5, with the primary differences being the reduced storage capacity and RAM which is typical of more affordable phones.

In addition to the turquoise blue model we tested, it’s also available in forest green. Both look elegant, even with a rear camera module that protrudes excessively.

Realme has been able to keep the weight below 200g, while the phone is just 9mm thick. A rear fingerprint sensor is located on the back of the device, in a position that makes it easy to locate.

Speakers are located on the bottom of the device, alongside 3.5mm headphone jack and micro-USB for charging. We’re disappointed Realme hasn’t opted for industry-standard USB-C here.

The Realme 5i comes with a 6.5in 60Hz IPS display, complete with Gorilla Glass 3 and a 20:9 aspect ratio. The 89% screen-to-body ratio is pretty impressive, although some rather thick bezels take away from that somewhat, particularly below the screen.

The selfie camera is housed with a teardrop notch, which can be hidden with the help of software. What can’t be changed is the screen quality, which is only HD at a resolution of 1600×720.

It gets plenty bright enough indoors, but we struggled to see much in broad daylight or sun exposure. The 5i only gets to a maximum brightness of 265 nits, something many entry-level smartphones struggle with.

However, the 5i feels good in the hands and very responsive to the touch. If you’d like more screen real estate, the Color OS 6.0 software allows you to swap out the regular buttons for gesture-based navigation.

You shouldn’t get carried away with the cameras on the Realme 5i, despite sporting four lens on the back and another for selfies. The main 12Mp, f/1.8 camera can produce good shots, complemented by a 2x optical zoom and 10x digital.

When outdoors and in well-lit locations, it won’t be difficult for you to achieve good results, as you can see from the camera samples below. Many shots have a good level of exposure, and the 5i is able to handle backlit objects well.

The wide angle and macro lenses work well, with the latter allowing you to capture details from just 4cm away. However, this is unchanged from the regular Realme 5, so you’ll know what to expect if you’ve used that phone.

It’s a similar story with the front-facing camera, as despite no option for wide-angle shots it produces satisfactory results for the price.

In terms of video, the 5i has support for footage up to 4K at 30fps, while it can make use of that wide-angle camera to provide a 119 degree field of view. The camera app itself has a simple and straightforward user interface, with various modes available at the touch of a button.

We mustn’t forget that the Realme 5i is directly competing with the likes of Xiaomi’s Redmi 8 in camera performance, and it offers both more cameras and a greater variety of modes than its counterpart.

For example, the Realme 5i recorded a score of 5570 in Geekbench 4’s multi-core test, but it rose only to 5867 on the more modern Realme 6i.

The figures for both these phones are very similar, particularly when it comes to processor power. There’s a more obvious disparity at the graphics level, with the 6i performing much better on many of GFXBench’s tests.

You’ll quickly realise when using the phone that it’s not designed for multitasking. With multiple apps open there is a certain amount of latency, something that’s especially noticeable when on social media.

Perhaps the most interesting point in favour of the 5i lies in the potential of its large 5000mAh battery. This also comes complete with 15W fast charge support, for which the adapter is thankfully included in the box.

It’s a shame the phone continues with micro USB as opposed to industry-standard USB-C, but it’s something many entry-level handsets persist with in order to save an extra few pounds. Hopefully, 2020 will be the last year of this cable appearing on mainstream phones.

In terms of battery life, we were able to get an impressive 9 hours of screen on time, while that extended to 14 and a half hours of video playback. However, do keep in mind that most of the time you’ll need to keep brightness relatively high in order to maintain good visibility.

The first thing to note when it comes to connectivity is that the 5i doesn’t support dual-band Wi-Fi. This is one of the main drawbacks of the phone, as it won’t be able to use your router’s 5 GHz channel and so download speeds are limited.

It’s perhaps inevitable that there will be sacrifices at this price point, but the main area you’ll notice this is when downloading apps and games from the Google Play Store. You shouldn’t see any significant changes when surfing the web.

On a more positive note, the Realme 5i has a three-card SIM tray, meaning it can support dual-SIMs and a microSD card at the same time. The latter allows you to increase storage capacity by 32 or 64GB.

In addition to the regular rear-mounted fingerprint sensor, there’s also the option to unlock the device with your face.

This can be set up on Color OS 6.0, Realme’s skin which runs on top of Android 9 Pie. While there are various additional apps that you might not use, it does offer plenty of customisation.

The Realme 5i offers very few differences from the regular Realme 5, so how it performs will depend on how much RAM and storage you choose.

However, despite only being released in January, the phone is no longer available from Realme’s UK site. It’s still officially on sale in Spain, with prices starting at €159 for a model with 3GB RAM and 64GB of storage (approx £143/US$178/AU$260)

Interestingly, Realme has flooded the budget phone market with five handsets that are all similarly priced. The differences between all five are very subtle, so it’s important to pay close attention to your specific needs.

As you may be aware, competition around this price point is fierce so it’s important to not get carried away by the headlining figures and specs quoted by manufacturers.

The Realme 5i has a solid quadruple rear camera setup, but in poor lightning it’s nowhere near as impressive. Another key shortcoming of the phone is connectivity, coming without support for 5 GHz Wi-Fi or NFC.

A major strong point is the large 5000mAh battery, and if you don’t have incredibly high expectations the 5i could be a great choice for you. However, the 6.5in screen is only 720p and doesn’t get very bright, so if you regularly watch videos on your phone we’d rule this one out.

This review was originally published in Spanish, on our sister site PC World. Translation by Anyron Copeman.