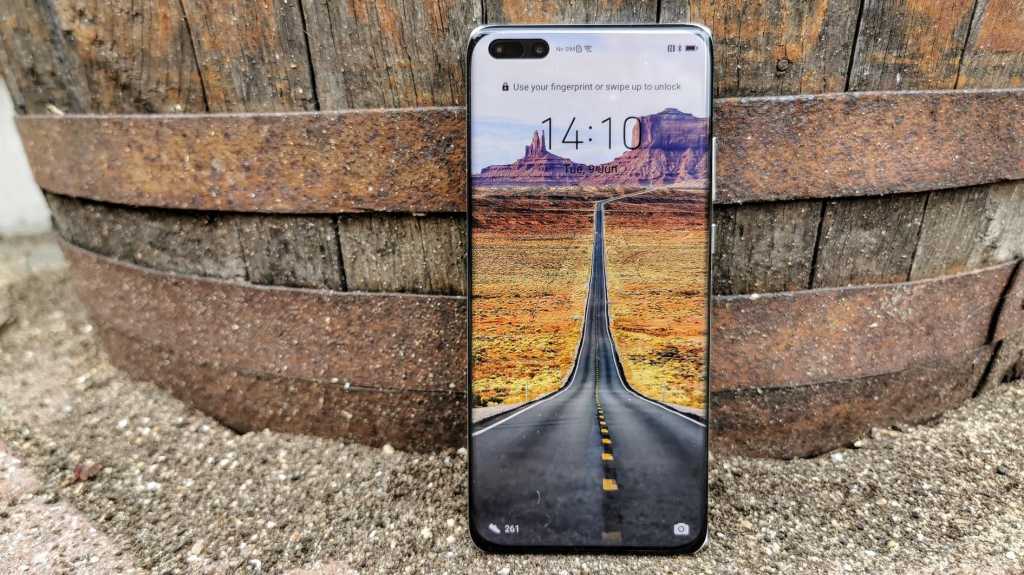 The P40 Pro+’s cameras are sensational but unless you can live without Google – something that’s harder than it first seems – then Huawei’s latest is a non-starter.

Back in March Huawei unveiled the P40 range, which has since grown a bit in the UK as we’ve gained the P40 Lite which was originally launched in Spain and was thought to be a model that wouldn’t come to British shores.

The P40 Pro+ sits at the opposite end of the range, as an ‘ultra flagship’ above the P40 Pro. It’s the first time Huawei has done this: last year, the P30 Pro was the range topper.

In many respects, though, the Pro+ is hard to tell apart from the P40 as the two phones are largely the same: they have the same design, the same screen, the same CPU and other internals.

What sets the Pro+ apart is its five rear cameras, ceramic back, extra storage and super-fast 40W wireless charging. Is all this worth the enormous price difference? Well, it could be if you really want  the dual optical zoom lenses, but in some respects the P40 Pro+ can be considered a concept phone that somehow went on sale.

Although you can read my colleague Alex’s in-depth review of the P40 Pro, I’ll cover the basics here.

The 6.58in OLED screen has a resolution of 2640×1200 – not the highest out there, but it makes for a perfectly crisp image. The glass curves over all four edges creating what Huawei calls an ‘overflow’ display.

This is done purely for aesthetics rather than function, because the screen itself does not curve over the top and bottom edges but it does make the P40 Pro+ a nice phone to hold and look at.

Arguably the most noticeable front feature is the large camera cutout which houses one of the best selfie cameras we’ve seen on a phone to date, along with a secondary depth sensor for those blurry backgrounds in portrait photos. 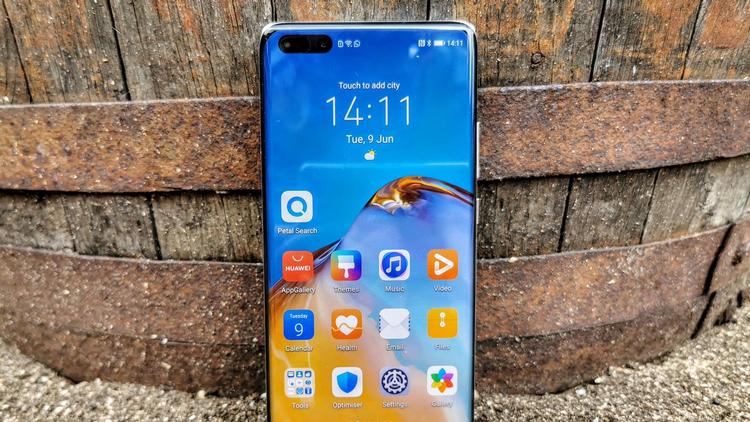 There’s IP68 waterproofing, physical volume buttons, an IR blaster and a dual-SIM tray which can take one of Huawei’s nano-memory cards instead of that second SIM. It’s a little unlikely that you’ll need more than the 512GB that the phone provides in the first place.

As with all recent Huawei flagships, there’s no 3.5mm headphone jack and the same under-screen speaker as the P30 Pro for phone calls. This means you get only mono sound from the bottom-facing speaker when not using headphones for music, games and videos.

Flip the Pro+ over and that huge camera array dominates the rear. The penta-camera arrangement also includes a dual-LED flash and rear-facing microphone. I’ll get to all of this shortly, before which it’s worth talking briefly about the ceramic finish. 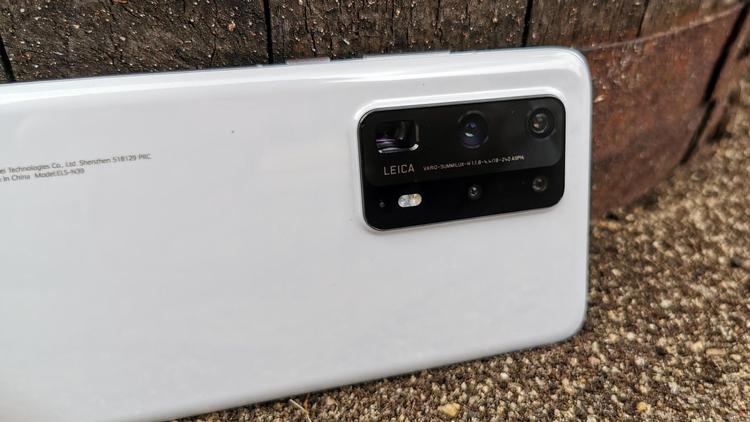 You can choose from black or white: there are no fancy colour finishes as you get on the P40 Pro. However, the smooth glossy finish of the ceramic feels great and is tough. Huawei says it’s almost as hard as sapphire glass and has virtually the same reflectivity as diamond. It is rather spoiled by the horrid-looking CE and ‘don’t throw in the bin’ logos, but these are mandatory, so it’s not Huawei’s fault.

Surprisingly, it doesn’t really pick up fingerprints and is supremely easy to keep shiny with a microfibre cloth. Even more surprising is that Huawei doesn’t include a clear TPU case in the box as it has always done with P-series phones. Whether that’s because of the hardness of the ceramic finish or for some other reason, I don’t know. All Huawei told me was that “it doesn’t come with a case”.

A case would also add to the already very heavy weight of 226g.

When one zoom isn’t enough, just add a second. In addition to the big 50Mp sensor which is shared among the P40, P40 Pro and Pro+ there’s a 40Mp wide-angle cine lens – the primary camera used for video – and a depth sensor.

Telephoto capabilities are what set the Pro+ apart, with a 3x optical zoom and – the true innovation – the 10x super-periscope zoom.

Other phones have claimed 10x optical zoom, but in reality that was achieved with a combination of 5x optical and software. The P40 Pro+ has a true 10x optical zoom, the first in a phone, and it’s mighty impressive (in good light). 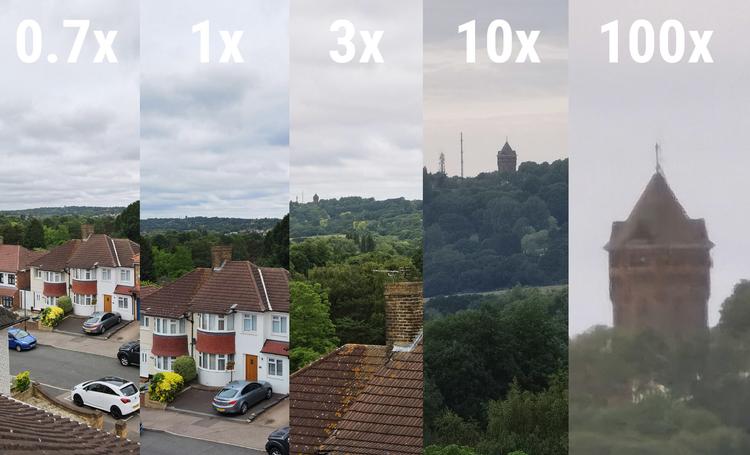 It’s a slight shame that both zoom lenses have an 8Mp sensor behind them, which seems a very long way off the resolution offered by both the 50Mp and 40Mp sensors, but when you know that the main camera delivers 12.5Mp photos as standard (because of pixel-binning) the difference isn’t quite as stark. 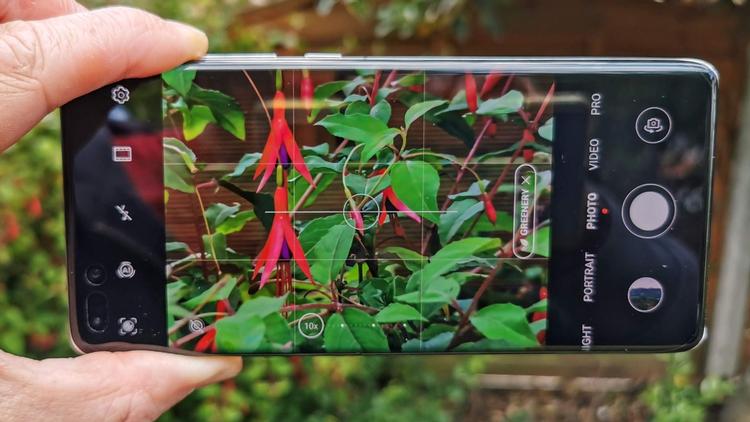 The big question is whether they’re any good. And we already knew the answer for all but the 10x zoom the P40 Pro was sent for review a number of weeks ago. And rather than repeating every comment from its review, let’s summarise by saying that, yes, the 50Mp and 40Mp cameras are really very good. The 50Mp is exceptional in low light, too. Again, see our P40 Pro review for more camera samples with these lenses.

You’re reading this because you want to know whether the 10x zoom makes the Pro+ worth buying. It’s certainly impressive, but the results I got with it were a bit hit and miss.

Here’s the sharpest image I managed to take: 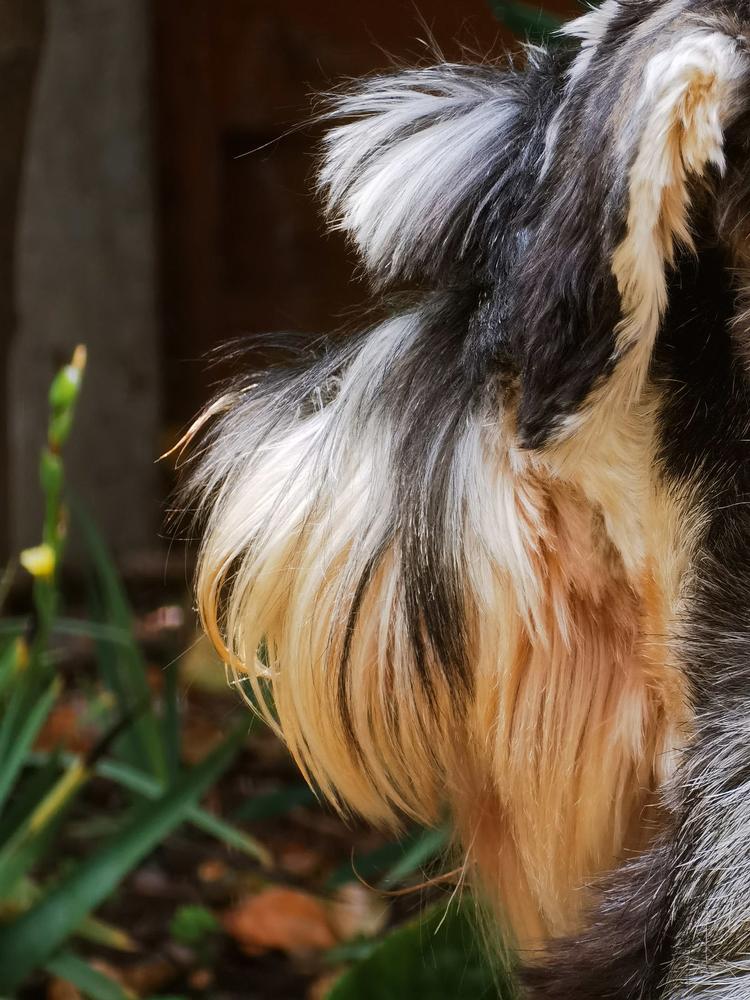 Some shots were nice and sharp, while others (specifically of people) were softer. We started off with a very early software build which was then updated to a version that was said to fix camera issues. However, the softness problem persisted. It could have been my shaky hands: even with the super stabilisation, shooting with the equivalent of a 240mm lens requires a steadiness that other phones don’t need.

In short, you’ll have to work with the limitations and keep the phone absolutely still, as well as shoot in good light. Quality drops off noticeably when it starts to get dark.

The 3x lens is also impressive in good light: 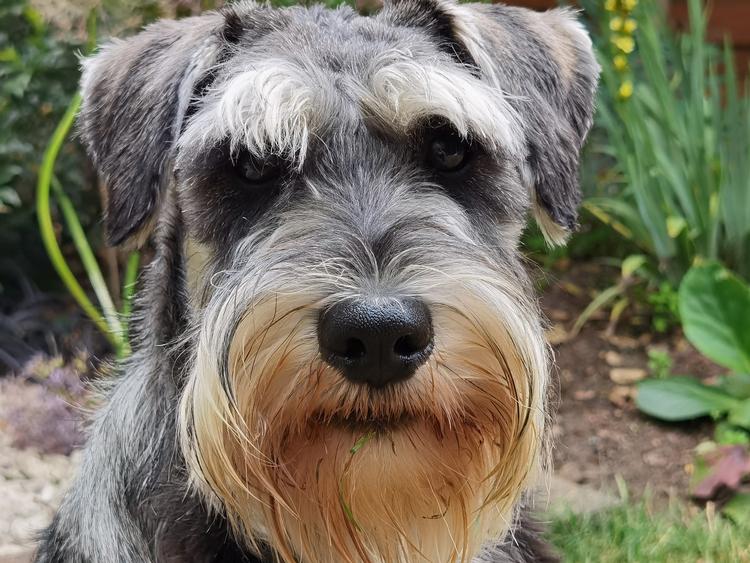 It’s impressive how the P40 Pro+ picks the best camera automatically, and it may not be the one you’ve chosen. Whether that’s due to the available light or you’re too close to focus, it will switch almost instantly.

I also appreciated the extra tools available in the Gallery app for removing haze and reflections. There’s also a way to remove unwanted objects (such as people) from photos using AI smarts.

The selfie camera is exceptionally good, delivering sharp, detailed photos that put many other phones’ rear cameras to shame. And it can shoot 4K60 video just like the rear cameras, which is nice. 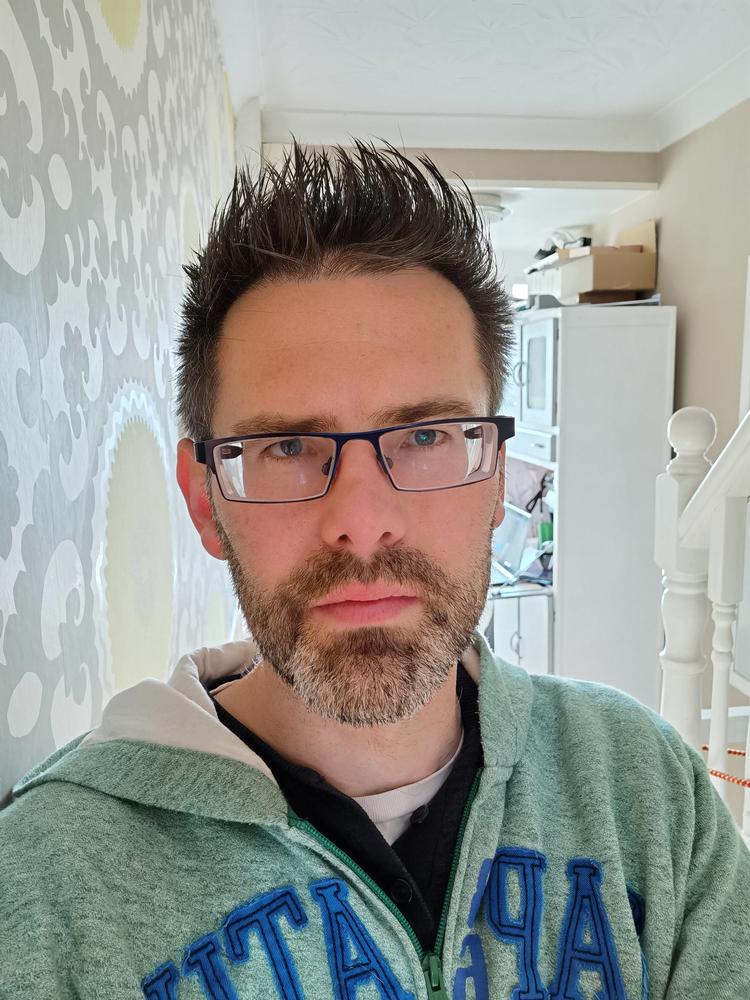 Talking of video, this is also impressive. Switch to video in the camera app and it will default to the wide-angle ‘cine’ camera. I can write little about this that – again – hasn’t been said before, since it’s the same camera that first arrived with the Mate 30 Pro. It shoots great-looking 4K video and, with the optical + digital stabilisation and clever sound processing, it delivers smooth footage and decent audio from the subject when you zoom in.

With the same 4200mAh battery as the P40 Pro (and certain previous Huawei phones) battery life was exactly what I expected. With Huawei’s aggressive power-saving measures, such as terminating apps running in the background and turning off the screen after a few seconds, it outlasts most of the competition. It’s possible to go two days, or thereabouts, on a single charge.

Even if you turn off some of those battery-extending features, stop it from killing apps you need running all the time and hammer the phone by playing games or using it for GPS navigation, it should still last a full day.

And charging is swift thanks to 40W wired and wireless charging. If you pre-order the phone starting on 25 June, you’ll get one along with a Watch GT2 bundled for free.

There’s reverse wireless charging so you can charge another Qi compatible device, and it’s a bit quicker than on the Mate 30 and P30 Pro.

Performance, as you’d expect, is identical to the P40 Pro:

Can you live without Google?

As has been said in every P40 review prior to this one, the hardware can be the best around but we are so reliant on Google in the West that it is extremely difficult to go without it.

You already know the reason, I’m sure, but if not, here’s why Huawei can’t put Google services on new phones.

And until you begin to use an Android phone without Google support, you don’t quite realise how deeply reliant apps are on those services. It isn’t just Gmail, Google Maps, YouTube and other obvious apps which the P40 Pro+ lacks: it also can’t run anything which needs Google location services (including Uber and games such as Pokémon GO) or Google Play services, which rules out apps such as Nest and Tile.

Phone Clone is an app which allows you to transfer many apps from an old phone to your P40 Pro+, but a good few will be listed as ‘Not supported’ including banking apps and others including eBay.

In some cases you’ll find alternative apps in Huawei’s own App Gallery, but when you need a specific app to control smart home kit, there is no alternative: you simply won’t be able to install and use those apps. 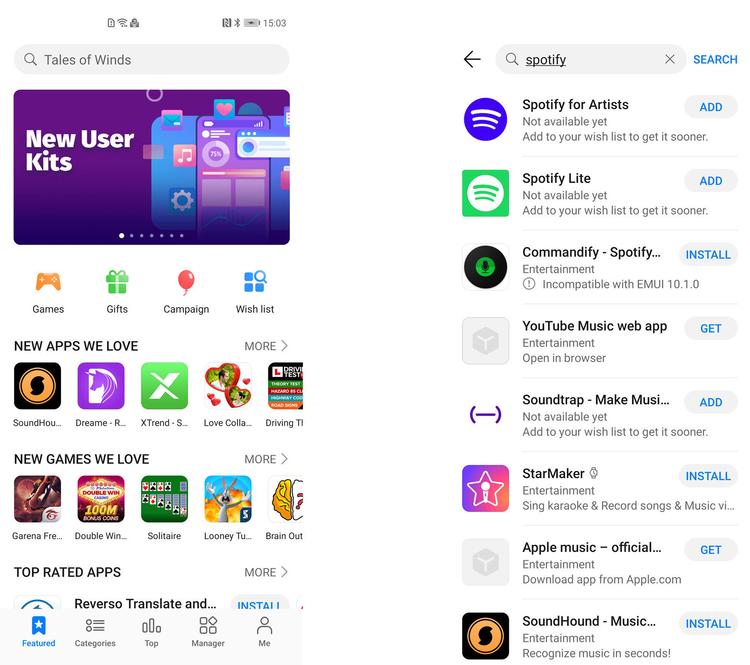 Certain apps will moan about missing Google services but will run and be useable. WhatsApp will transfer via Phone Clone, but of course won’t be able to restore (or back up) your chats to and from Google Drive. And you can’t access documents stored in Google Drive either.

Similarly, you can’t back up your camera roll to Google Photos. Using a web browser as a workaround to access Google Photos, YouTube, eBay and other services isn’t that pleasant, and it’s certainly not convenient.

Remember, too, that apps copied via Phone Clone won’t be updated, so you’ll be stuck with the version you copied over.

In the past, it was fairly easy to install the Google Play Store and Google services on Huawei phones, but not any more. And there’s no guarantee that even if you do manage to get it working that it will continue to work. 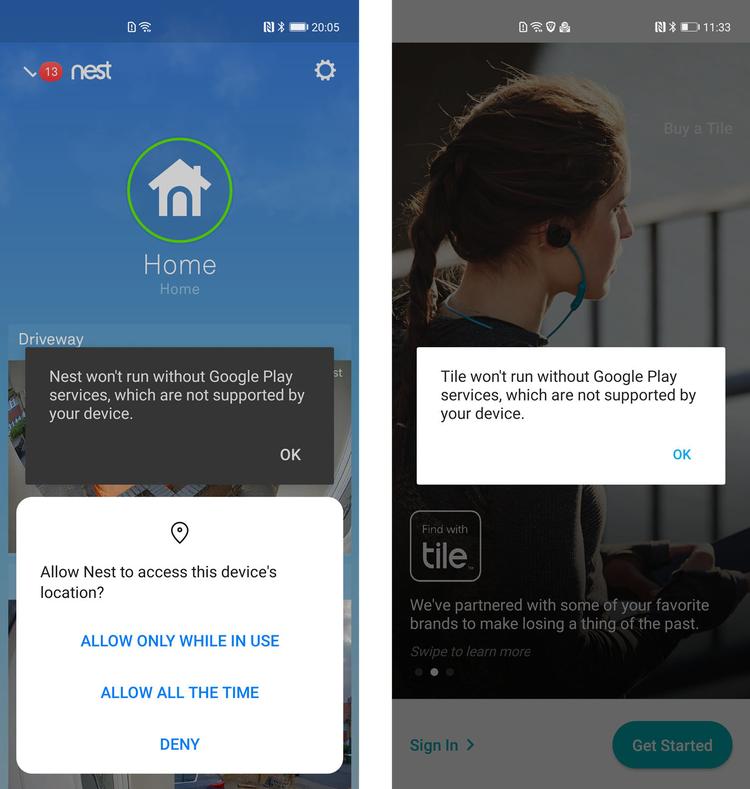 As well as the App Gallery, Huawei has recently put Petal Search on the home screen of P40 devices. This is a search tool to find apps from other sources and may help you out for specific apps. There are also Quick APPs, which are basically shortcuts to websites that work like apps, such as Disney+ and Strava.

Given that the P40 Pro+ is one of the most expensive phones around, these compromises are difficult to accept.

The P40 Pro+ is a fantastic phone with the best cameras of any phone we’ve tested. This makes it all the harder to say that it’s not one we can recommend you buy, unless you simply want it for those cameras and have a second device that allows you to use the apps which you can’t get on the Pro+.

If you’re an enthusiast who has already owned a string of Huawei phones and can’t bear to move to a different brand, you might just about be able to live with the compromises here. The company is rapidly developing its own ecosystem and is hopeful that developers will bring their apps to App Gallery. And if you’re really keen, there are – according to certain YouTube videos which are easily found – still ways to get Google services onto Huawei phones.

If you’re put off but the absence of all things Google, you can instead consider the Oppo Find X2 Pro, Samsung Galaxy S20 Ultra and OnePlus 8 Pro.