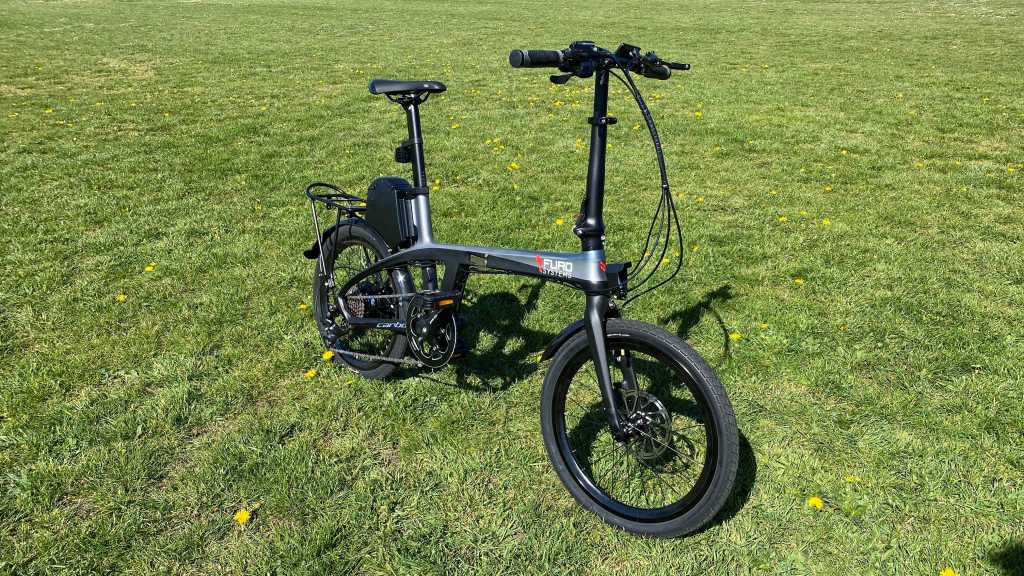 It might be on the expensive side, but with a lightweight design and innovative features, the Furo X Max is well worth the cost.

Founded by two aerospace engineers, FuroSystems aims to offer quality and performance at a more attractive price point than many of its rivals. The latest electric bike from the company, the Furo X Max, is a rival for established foldable bikes from the likes of Brompton. It claims to offer a ‘best-in-class foldable electric bike experience’.

The Furo X Max is at the lighter end of the scaled for folding electric folding bikes thanks to a frame made entirely from carbon fibre. It has 20in all-terrain tyres, which means they’re larger than some other folding bikes. It weighs in at around 15kg including the battery, and that’s lighter than the 17.8kg Gocycle GX. It’s still heavy to carry up a flight of steps, but it does make getting it in and out of the house, and on public transport, possible for most people.

There isn’t an easy way to pull the bike along behind you, or push in front of you like you can with the Gocycle GX when in its folded position.

To fold the bike, you simply unclamp the frame clamp – located in the middle, released by a small metal button unlikely to be pushed by accident – and unlock the stem clamp to fold the handlebar.

When storing the bike, there is a way to sit the folded bike down without it unfolding or toppling over.

When folded, it’s small enough to fit onto a busy train or lift into into the boot of a car, and it also means it takes up less space at home when not in use.

Some electric bikes are single speed, but the Furo X Max is equipped with 9-speed Shimano gears. It’s great to see this as it makes it easier to pull away from a standing start, or climb steep hills (when the battery runs out) and potentially scream past the 15.5mph max speed of the electric motor.

At this price, it’s nice to see a Bafang rear hub motor with 500W peak power, which is certainly welcome in use. Whether you decide to use the maximum assist level, propelling you to 15.5mph with little effort or decide to use it as a backup when facing uphill slogs, it kicks in near-instantly. That’s also thanks in part to the torque sensor in the pedal system, used to determine just how much power to provide at any given moment. You can select the power mode using the control panel on the handlebars.

This has a useful backlit LCD which shows key information including the current battery level, trip distance, current speed (in both mph and km/h, thankfully) and the level of assistance.

There are 6 levels available, with 0 offering no assistance and 5 offering full assistance which gives you full power at the expense of range. When you’re feeling lazy, crank it up to level 5 and go on an effortless bike ride and when you want a challenge, leave it on 0 and do all the hard work yourself. It’s the versatility of the system that makes it so appealing, especially when used in conjunction with the manual gear system, although you won’t find any instant-boost buttons here – we did love this on the VanMoof S3.

Unlike most other high-end electric bikes available at the moment, there’s no companion app for iOS and Android that lets you tweak features. Some will see this as a negative, while others will view it as a positive: there are no functions which can only be accessed via an app which may or may not be available in years to come.

There is customisation available on the control panel, allowing you to easily change from km/h to mph, but for advanced tasks like changing the speed limit – the limit for e-bikes is 20mph in the US, for example – it’s a rather fiddly process, involving multiple button combinations to access the hidden menu.

Stopping power comes courtesy of Shimano M315 hydraulic disc brakes which do an incredible job at scrubbing off speed.

It’s nice to have 20in all-terrain tyres for those moments when you have to ride on gravel paths, or mud, as they offer decent grip, The Furo X Max is ultimately designed to be used as a city bike, though, and that’s most evident by the handy indicator system. These are controlled by a couple of buttons on the handlebars, and a quick press allows you to show nearby cyclists and motorists where you want to turn without using hand signals.

Bizarrely, the system and the front-mounted LED light, aren’t powered by the on-board battery; they need their own separate replaceable batteries.

At least the battery is removable. It mounted in the frankly ugly box just behind the seat. This is locked in place with a key and also has a USB port to charge your phone when out riding. Once unlocked with the included key, the battery pack simply slides off the bike, allowing for a much easier charging experience – no need to lug the whole bike to a mains socket when it needs a top-up. Speaking of, it’ll take around five hours to get a full charge.

In terms of capacity, the Max gets a high-quality LG 378Wh battery compared to the smaller 314Wh battery of the standard Furo X. The Max provides around 55km of range on average, but as with all e-bikes, how far you’ll go will depend on a number of factors, from how hard you pedal to the level of assistance set, and even the ambient temperature. The good news is that with the gears, it’s just as easy to pedal with a flat battery as it is with a full one, something that can’t be said of a lot of other electric bikes available right now.

As I’ve alluded to, this all equates to an incredible riding experience. There’s a walk mode that’ll only kick in when you first get moving, and assistance gradually fades when you reach 15.5mph, rather than the noticeable cutout you get with lesser systems. That means that once you hit the maximum speed dictated by the assistance level, it’ll slowly fade away, and you might not even notice you’re riding without assistance.

Of course, there’s always the worry that something will go wrong – especially with an electric bike, which are notoriously hard to repair – but the two-year warranty should help put your mind at ease. The Furo X Max is also designed with standardisation in mind, with the company claiming that your local bike repair shop should be able to undertake repairs without any issue, and if there is a problem that can’t be fixed, you can ship it back to FuroSystems to take a look at.

The Furo X Max is a well-built bit of kit, and the price tag reflects that with an RRP of £2,499 (around $3,130), but to celebrate the launch of the electric bike, you can currently order it from the Furo Systems website for £1,999 (around $2,500) with a number of freebies, including front and rear fenders, a luggage carrier, kickstand and lighting kit.

The downside is that, at the time of writing, orders placed right now won’t be shipped until September 2020, which is quite the wait.

£1999 may sound expensive, but it’s actually well-priced compared to some of the best electric bikes available right now, some of which cost considerably more.

You might feel more comfortable going with a well-established brand when it comes to spending a lot on an electric bike. However, the FuroSystems Furo X Max is really well built and great to ride. We like the quick-and-easy folding system and the powerful Bafang motor that offers plenty of torque when you need it. It’s also lightweight thanks to the carbon fibre frame: some electric bikes that can weigh in excess of 25kg, and the 9-speed gears mean you can ride it like a normal bike when the battery does run out.

Every element of the Furo X Max has been thought out, and although it does miss out on a few features available on other electric bikes (such as a built-in alarm and location tracking system), as it’s a fold-up bike, you’re less likely to have to leave it locked up anywhere anyway.