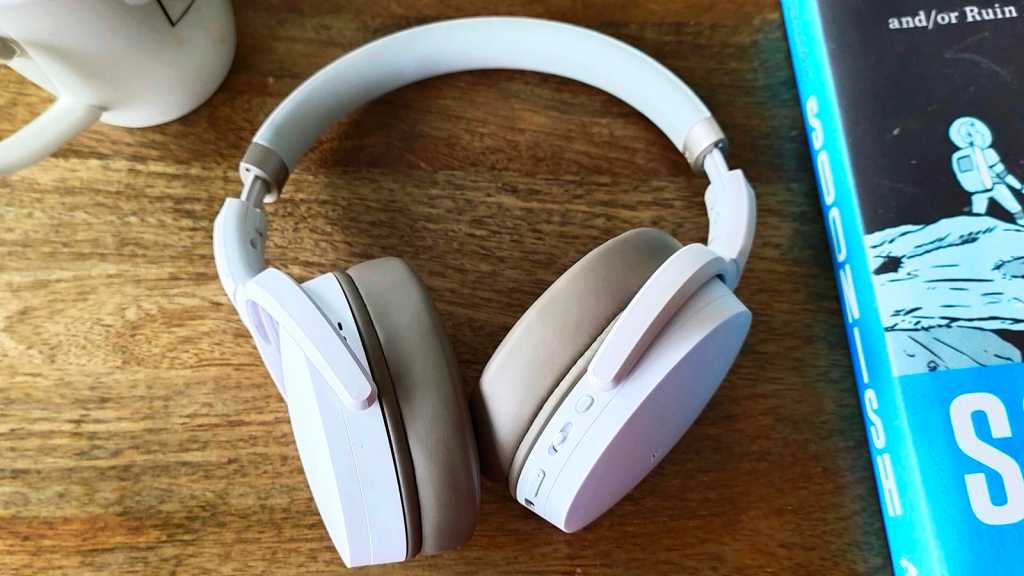 The HD 450BT are Sennheiser’s mid-range over-ear wireless headphones with Active Noise Cancellation. They’re not cheap enough to be condidered budget but they are a lot more affordable when compared to many pairs from the likes of Sony and Bose with noise cancelling.

The first thing I noticed when testing the 450BT is just how comfortable they are.

Well, no. The first thing I noticed out of the box was the plastic design – but clean lines and a matte finish keep these cans from looking cheap or flimsy, if only a little plain. But I’m not complaining. After wearing them, I found them both comfortable and lightweight. The 450BT weigh about 238g, and you barely feel them. 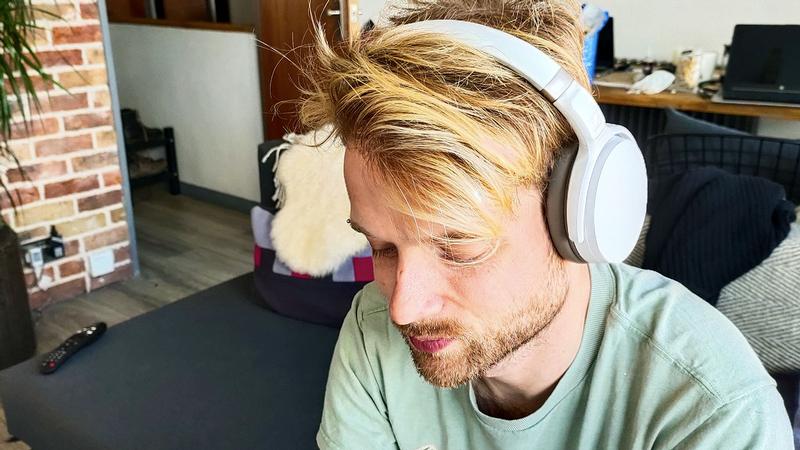 The pair I reviewed were white, which admittedly makes dirt and scuffs more noticeable – but there is an option in black if that’s a concern.

The dark grey, faux leather-covered ear cups pivot and gently cushion the ears without that unpleasant feeling of being clamped into a vice grip. I wore the 450BT for two to three hours at a time without any complaints.

It is possible your ears might feel sweaty if you wear them for too long, or when you’re on a run, but that’s something you can expect from pretty much any over-ear headphones.

Hinges on the cups allow you to collapse the headphones stow them away. They lock right into place in a couple of soft, reassuring clicks. The 450BT come with a convenient carrying case too – perfect for commuters and students. 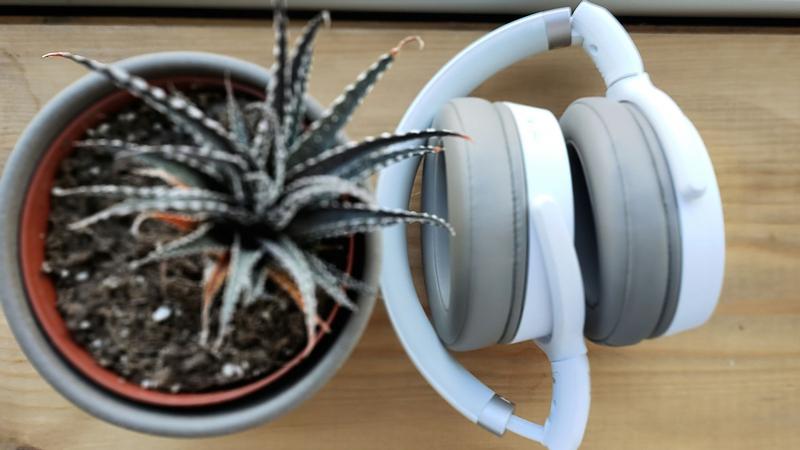 The right ear cup hosts all your control buttons, including one that triggers the smart assistant on whichever device you’re connected to. The buttons aren’t labeled, so you might need to refer to the manual a few times at first to fully get the hang of which button does what.

A toggle wheel allows you to accept or reject calls, or skip backwards and forwards between songs. The power button doubles as the noise cancellation button.

Unlike standard equalizer sliders, the Smart Control app features a circle that you can drag to any point in a matrix. 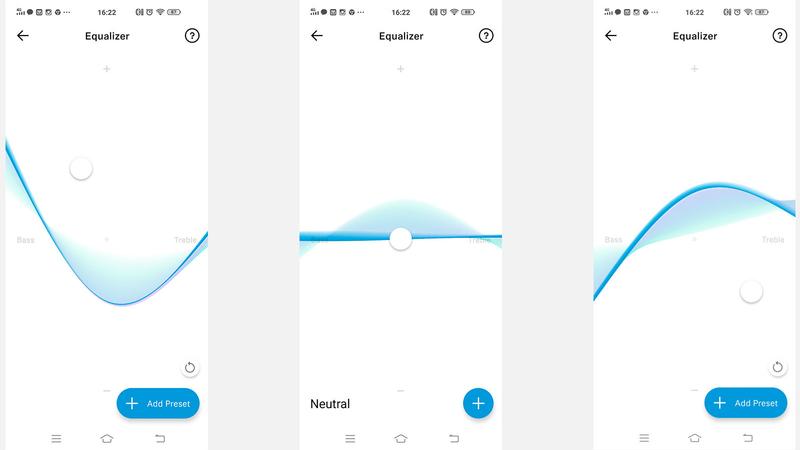 Slide the circle to the left for rich, heavy bass or to the right for clear, crystalline trebles.  Alternatively, lower the circle to heighten mid-tones and raise it to do the opposite. Though it may seem counter-intuitive, it makes sense when you look at the visualization, which is a tone distribution curve.

The standard mix leans towards the bassier side, but this adds warmth. The quality remains wonderfully clear and resonant. The 450BT is well-suited for R&B, hip-hop or bass-heavy pop like Billie Eilish – but that’s not to say they’re limited.

In fact, they’re quite versatile, thanks to the intuitively designed equalizer. Simply adjust it to whichever mix suits you and you’re good to go. You can save the settings if you, like me, listen to a variety of genres as well as podcasts.

The standard output of most headphones is 20 to 20,000Hz, but the 450BT has a frequency range of 18Hz to 22,000Hz. This means they’re capable of producing lower bass as well higher upper-range sounds. The 450BT offer 32mm drivers, which are slightly smaller and less powerful than the typical 40mm you find on similar headphones.

I was impressed with the Active Noise Cancellation on the 450BT. Though they don’t obliterate sounds to 100% silence, the feature significantly reduced the volume on ambient sounds like neighbours speaking loudly, or the buzzing of the computer fan and fridge when I worked in the kitchen.

On the road, the 450BT feeds back sounds of cars and people so your attention isn’t fully dampened. 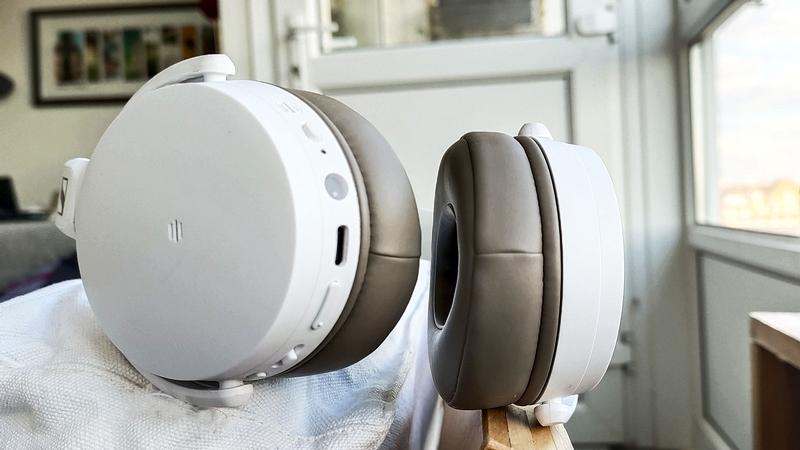 I used the headset to listen to music and video call my parents (as is life for most during lock down). The 450BT offered noticeably clear sound, which my folks could detect right away.

On my end, the microphone fed back my voice into the mix so I had a sense of what my parents could hear. Just remember to wear the cans in the right direction though, or the sound will be muffled. Right is right: the mic must be on your right.

The 450BT connected to other devices effortlessly. And once paired, the connection established automatically. With Bluetooth 5.0 connectivity you can connect up to two devices at once, which I found particularly handy flitting between a laptop and phone.

A small hiccup with this was audio streaming from my laptop paused each time I received a notification from my phone. Annoying? Yes. Forgivable? Somewhat.

The headphones boast a 30 hour battery life on the box. I only had to charge them a couple of times during two weeks of testing. The Sennheiser Smart Control app displays the battery status and even after 4-5 hours of playback, the reading only dropped to 90%.

When the battery is low, the headphones will let you know – with a looped voice memo. I found this mildly irritating. I would have preferred it powering off after one announcement but you may appreciate the advanced warnings. 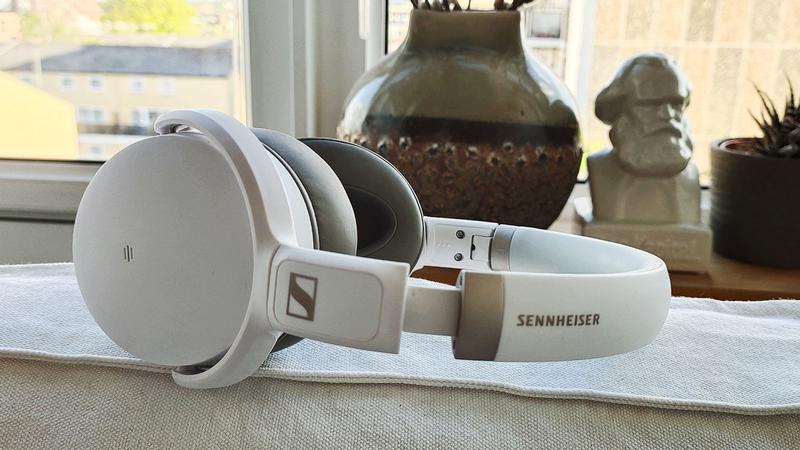 Fortunately, you can attach an audio-out cable, which is included, straight into the headphones and carry on listening. As long as your playback device has a headphone jack, of course.

Sennheiser recommends charging for 2 hours if you’re starting on empty. If you top up from time to time, it’s unlikely you’ll ever reach zero. The 450BT charge via USB-C and come with a charging cable.

The Sennheiser HD 450BT headphones are available in either white or black directly from Sennheiser for £159.99/US$199.95 or from Amazon, where the option in black is slightly cheaper than the RRP.

While we can’t exactly class them as cheap, over-ear headphones from similarly premium brands like Bose or Sony would cost you a lot more. Just take a look at the Bose QC35 II or the Sony WH-XM3, which feature our round up of the best headphones. They have an RRP of £329.

For less expensive options see our round up of the best budget headphones.

If you’re looking for good quality, customizable sound in a pair of good-looking, comfortable headphones, you can’t go wrong with the Sennheiser HD 450BT.

They are portable and compact, too.

They make for an ideal pick for those who travel a lot and students: whether for the ANC to drown out ambient distractions, or for the long-wearing comfort of the ear cups through late hours of streaming (er, studying).