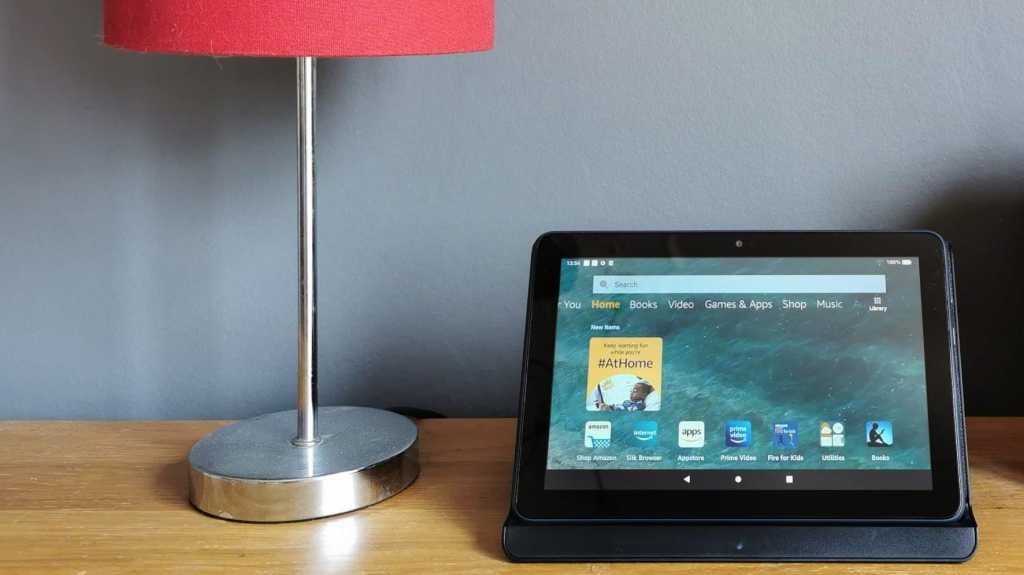 The latest Fire HD 8 is a good tablet which is made a bit better in the Plus version. As ever, if you can live with the apps on offer, it’s still fine value.

When it comes to budget tablets, Amazon rules the roost. Very little has changed over the past few years with new models being essentially no different from their predecessors. This year, though, there’s a more significant change: a Plus model.

This is identical to the normal version except for the fact that it has wireless charging and more RAM, which helps a bit in the performance stakes (but it’s still an entry-level tablet – make no mistake). 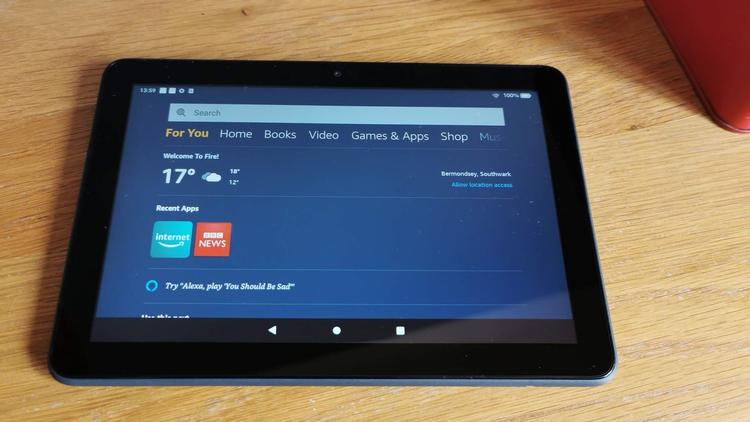 If you own the previous version of the HD  8, you will instantly notice a few changes. First is the fact that the camera sits on the ‘side’ of the tablet, not at the top. That’s because it’s designed to be used  in landscape mode, not portrait. 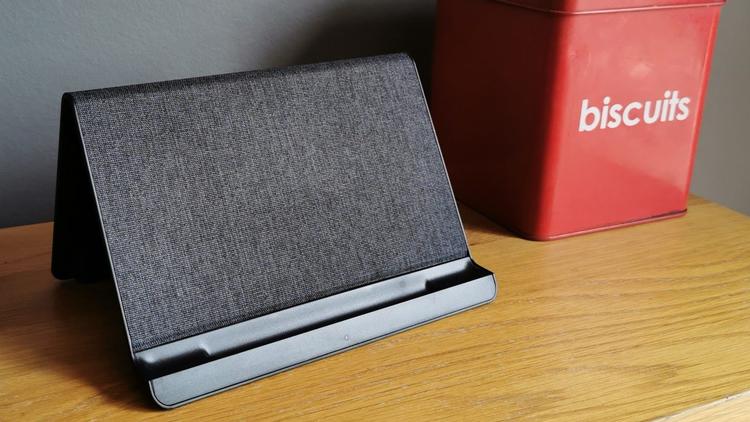 And this is really the reason why wireless charging has been added: you can pop the tablet on the dock (or another Qi-compatible wireless charger) and it will charge and automatically switch into Show Mode, which is pretty much identical to what you’ll see on the Echo Show.

It means the screen stays on and displays various things such as the time, a weather forecast, tips for using Alexa, news headlines and photos that you’ve uploaded to Amazon.

Alexa is hands-free whether you’re in Show Mode or using the HD 8 Plus as a tablet, though.

The dock is useful for certain things such as video calls or following recipes when you need to be hands-free, and it’s also fun to use it as a digital photo frame by saying “Alexa, show my photos”. 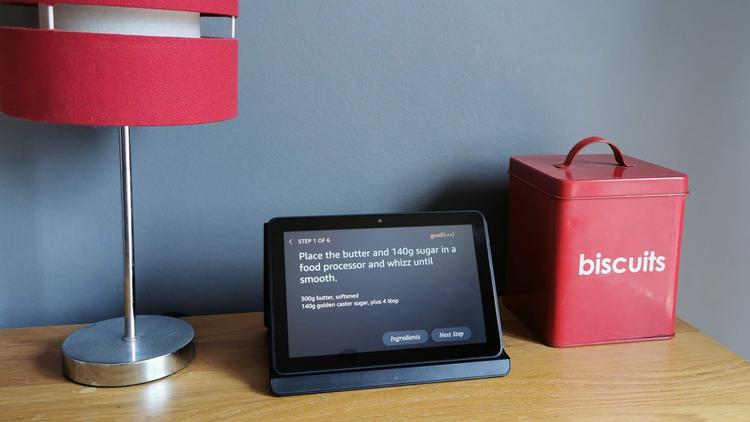 Unfortunately, it can only show photos you’ve got stored with Amazon (there’s no Google Photos support) and you only get 5GB of storage free unless you’re a Prime member, in which case there’s unlimited free photo storage for as long as you subscribe.

Stereo speakers are above the camera in the edge of the tablet and sound reasonable, but not as good as the Echo Show 8, so it’s not as good for listening to music. But, of course, you can’t grab the Echo Show 8, download some stuff from Netflix and iPlayer and watch it on a flight to New York. 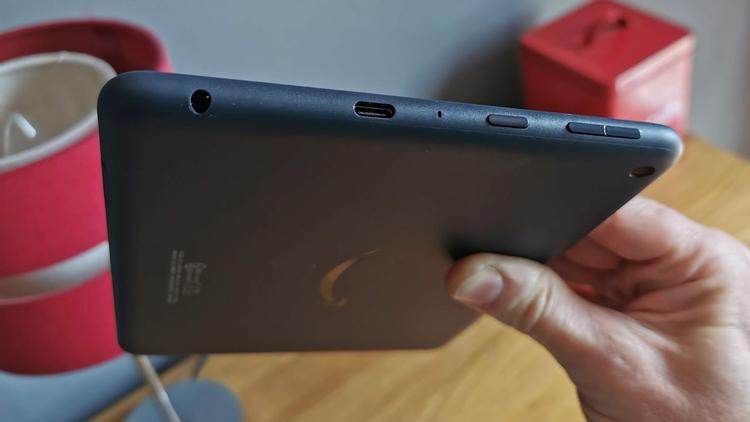 If you’re not charging wirelessly, there’s now a USB-C port and the Plus comes with a instead of the old micro-USB but thankfully there’s still a 3.5mm socket for connecting headphones. Bluetooth is built in should you want to use wireless headphones, and Wi-Fi has been upgraded to 802.11ac.

The charger in the box is a bit more powerful than the standard HD 8 at 9W, but it still takes several hours to recharge from empty.

Amazon claims a 12-hour battery life – for mixed use – which is 20 percent more than the last HD 8, and we found videos played for about 9.5 hours at maximum brightness. That’s a good result for an entry-level tablet.

Performance, however, is another story. It’s best described as adequate. It’s on a par with a budget phone, which is fair enough for the price. But we’d hoped that the faster processor (compared to the 2018 model) and extra RAM (compared to the regular new HD 8) would make the Plus powerful enough so that the FireOS interface would be smooth and stutter-free. 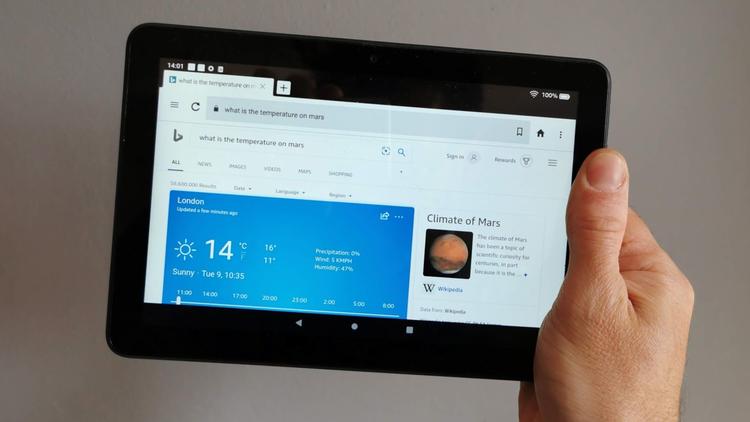 Sadly that’s not the case, and it still feels every inch the low-cost device, despite being more than twice the price of the Fire 7. It’s worth noting that the 1280×800 screen is much nicer to use than the smaller, lower-resolution display on the 7.

Cameras haven’t been upgraded so are, as ever, rather disappointing. They’re fine for chatting to others on their Echo Shows, or using Skype or Zoom.

Hardware is only half of the story. This isn’t, as we always have to point out, an Android tablet.  FireOS might be based on Android 9 these days, but there is no Google here.

Fire tablets are really portals into Amazon’s world, whether it’s Prime Video, Kindle books, Amazon music or any of the other services it offers. It’s very easy, naturally, to browse Amazon products and order them. 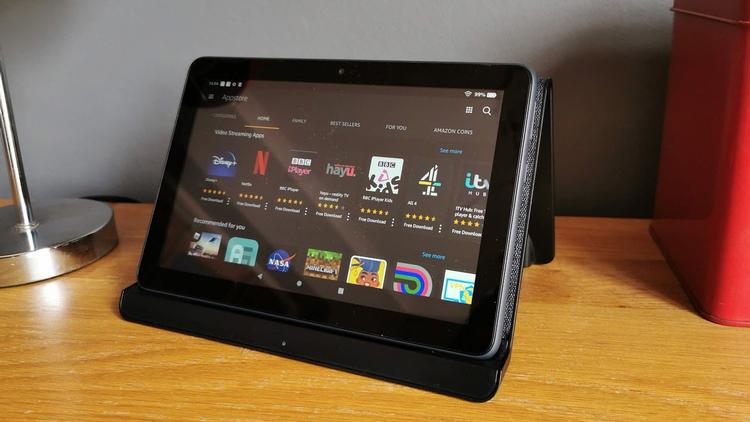 You don’t have to be a Prime member to use a Fire tablet, but it’s worth considering which apps you will want to use as the Appstore still lags behind Google Play. If you’re not averse to putting in a bit of work it’s really not difficult to install the Play Store but be warned: not all apps will work properly or smoothly.

And it’s still frustrating that while the YouTube app is available again on Amazon’s Fire TV streaming devices, it’s not on Fire tablets. So you have to use a web browser and the YouTube website.

As the HD 8 itself is £10 / $10 more than the 2018 version, the Plus is actually £30 / $30 more than you might have paid before for a Fire HD 8, and that’s before you pick any of the upgrades such as 64GB of RAM instead of the standard 32GB, or pay the £10 / $15 fee for the privilege of not seeing adverts on your lock screen. This still seems exceptionally cheeky, especially with the price rise.

You don’t get ads by default on the Kids Edition, though. This is based on the standard Fire HD 8, not the Plus, and comes with a bumper case, access to Fire for Kids Unlimited for a year and a two-year warranty for £139.99, which is really good value.

The question for many people will be whether it’s worth spending the extra on the Plus over the regular model. And the simple answer is no. Unless you’re going to get the wireless dock and use it like an Echo Show, you may as well save your money. The standard HD 8 has the same Show Mode and can be used in the same way. The Plus’ performance isn’t noticeably better, either.

If not the Plus, then, is the Fire HD 8 a good buy? Yes, especially if you’ll use it mainly for entertainment. It’s a good option for kids, too, and has decent battery life. It has just enough RAM for performance to be better than the Fire 7, which remains the best only option for those on a really tight budget.