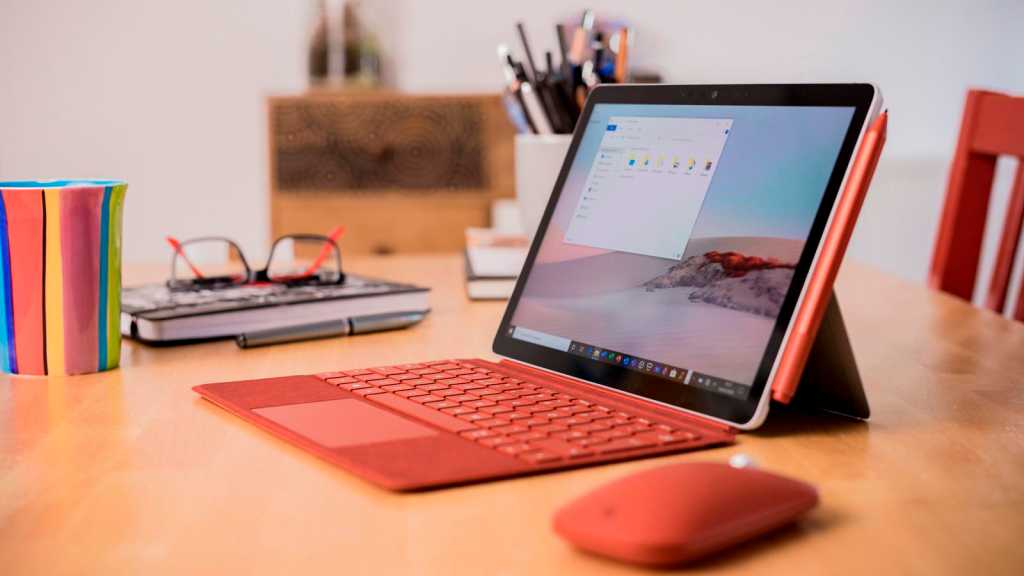 The new Surface Go is a compelling second-generation device, but question marks remain over its long-term suitability for productivity, particularly on the baseline Intel Pentium Gold model.

The release of the original Surface Go was technically a follow-up to the very first Surface PC back in 2012, although it had transformed in the six intervening years.

A follow up so soon after shows Microsoft sees a future in this smaller and more affordable form factor, even without many wholesale changes on its successor.

But can a bigger screen and upgraded internals truly make this a replacement for a traditional clamshell laptop?

The design of the Surface Go 2 will be instantly recognisable to anyone who used the original, or any recent Surface 2-in-1 for that matter.

Technically, the device is simply the tablet itself, with the crucial Type Cover still considered a £100/US$100/AU$199.95 accessory. You’ll need it to get anything like laptop functionality from the Go 2, and there are better pure tablet experiences out there.

A significant slimming of the bezels means the Go 2 now sports a 10.5in panel within the same body as the original. This is undoubtedly welcome, but I feel Microsoft could go a lot further. The Surface Pro X has proven what is possible on a Windows tablet, so the design still looks a little bit dated. 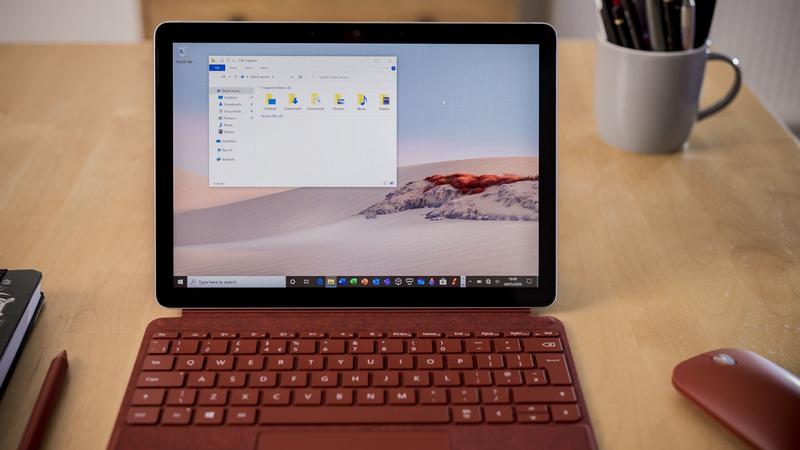 Until you turn it on, that is. The full HD (1920×1080) panel hasn’t been upgraded, but still offers a superb level of detail and excellent colour accuracy. The model I tested also recorded a maximum brightness of 450 nits, making working outdoors a distinct possibility.

That’s helped by the tablet itself weighing just 544g, while even with the Type Cover, Surface Pen and Surface Pen it still falls well under 1kg.

Many other design elements are very much in keeping with Surface products in the past, with a silver aluminium body echoing the likes of the Surface Pro 7.

The built in hinge is cleverly accessed via a slight indentation on the side of the device, and can be adjusted up to a full 180 degrees depending on what you’re doing. It’s this kind of flexibility that gives it a key advantage over a clamshell design. 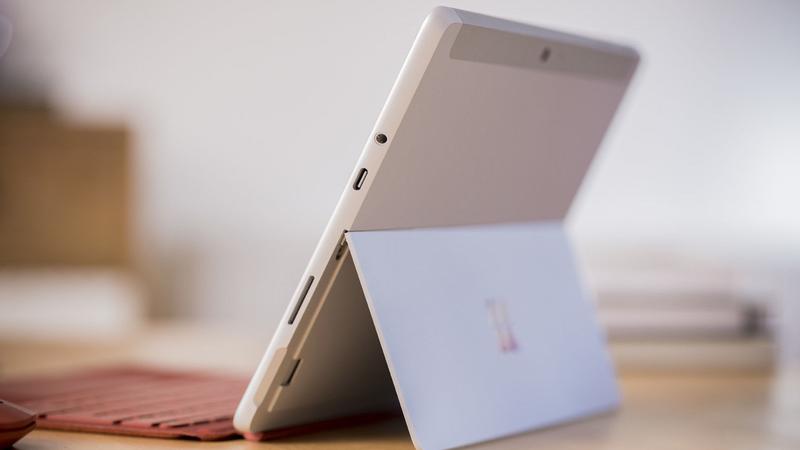 The Surface Go 2 sports two cameras, but it’s the 5Mp front-facing camera that’s most important on a device such as this. Contrary to so many laptop webcams, it’s an excellent sensor that will serve you well in video calls. I was even tempted to take a selfie from time to time, with the Go 2 offering a solid level of detail and accurate colours.

It works well for Windows Hello, but without a separate fingerprint sensor it’s your only biometric option for unlocking the device.

The rear 8Mp camera isn’t quite as impressive, although it’ll work just fine for document scanning and the like. With HDR turned on I was able to get some acceptable looking photos, although they did look like they had a filter on them at all times.

The Go 2’s selection of ports is decent, even if it does persist with the proprietary Surface Connect for charging. You also get a USB-C port, 3.5mm headphone jack and SD card slot, while LTE models also come with a nano-SIM tray. 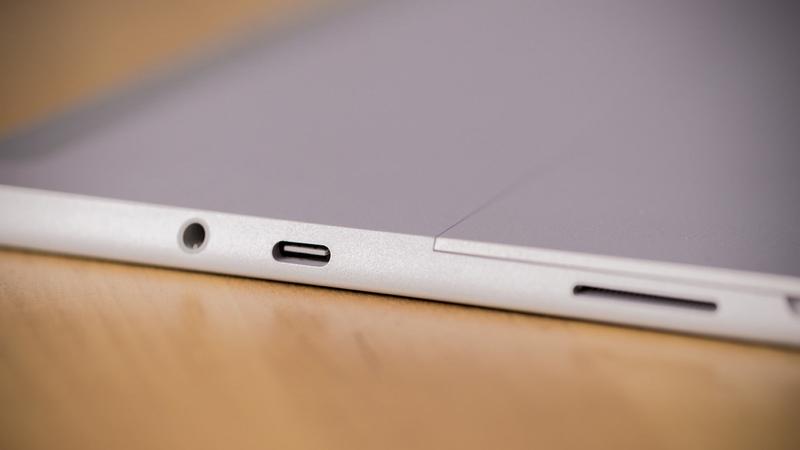 Let’s talk about those accessories then, starting with the all-important Type Cover. This is unchanged from the original Go, partly because Microsoft has done such a great job of fitting a full keyboard into such a slim and lightweight body. With just 10.5in of display to play with it’s not quite full size, but after a brief adjustment period I really enjoyed the typing experience.

All the regular Windows keyboard shortcuts still work here, while the backlit keys are tactile and responsive, offering a decent level of travel. There’s even a tiny trackpad, although I’d recommend using the mouse instead. 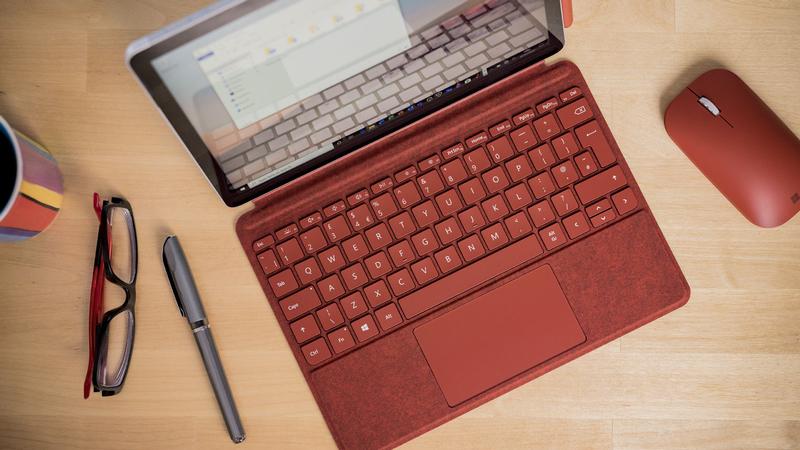 This also seamlessly connects via Bluetooth, and offers a convincing navigation experience. Paired with a touchscreen and the Surface Pen, the Go 2 offers lots of flexibility when it comes to input methods.

The Pen itself loosely resembles the Apple Pencil, and can be discreetly attached to the side of the device when not in use. When you do get round to picking it up, there’s a good level of functionality here, primarily via the Microsoft Whiteboard app. While I enjoyed taking a few handwritten notes and doodles, I feel creatives and digital artists would get a lot more value from it. 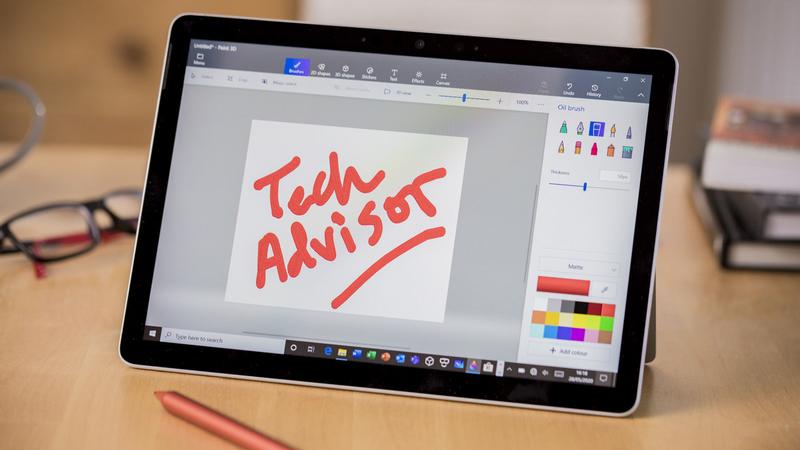 The Surface Pen’s AAAA battery will give you up to 12 months before needing replaced, while the Type Cover and mouse should last even longer.

The Surface Go 2 is a bit of a mixed bag when it comes to performance.

I tested the Intel Pentium Gold 4425Y model, which Microsoft claims is up to 64% faster than the 4415Y on the original Surface Go. However, this is still very much a budget chipset, and it shows.

Even with 8GB of RAM and a 128GB SSD, the Surface Go 2 was unable to handle the rigours of my daily workflow. It regularly struggled with multiple tabs and windows, ultimately creating a frustrating experience.

It’s just about fine for basic tasks and consuming multimedia content, but I began to experience some slowdown with anything more complex. None of the Surface Go models are designed with gaming in mind, and that’s especially true on the model I tested.

As you can see from the below benchmarks, the Surface Go 2 is a slight upgrade on its predecessor but has a long way to go to catch a recent iPad and some of the best budget laptops around.

Benchmarks aren’t always the most accurate representation of performance, but they reflect my experience quite well here. I’d anticipate the newly-introduced Core M3 processor will deliver significant enhancements to performance, but in the case of the Pentium Gold model I’d probably consider other options.

We shouldn’t forget about speakers though, and the Go 2 has a solid pair of front-facing stereo speakers. There’s nothing remarkable about their performance, but impressive volume and decent treble make them roughly in keeping with an average laptop.

The Surface Go 2 is among the smallest devices capable of running a full version of Windows 10, and it does a good job of keeping the core experience the same. However, that’s not the case out of the box, as it comes with Windows 10 in S mode by default.

This limits downloads to the Microsoft Store only, but I’d recommend nearly everyone takes advantage of the free upgrade to Windows 10 Home. Indeed, I had to do so in order to download software for the above benchmarks.

Once you’ve got that out of the way, the real question here is how well Windows 10 Home functions on the Surface Go 2.

With the official Type Cover and wireless mouse, it does a good job of simulating a laptop experience, albeit in a significantly smaller form factor. Having been used to displays of at least 13in this took some getting used to, and most elements of Windows 10 have been shrunk to fit the 10.5in panel.

However, before too long I was moving through the operating system with relative ease.

Perhaps unsurprisingly, the Surface Go 2 shows many of its limitations while the keyboard is detached. Despite a few modifications to make it suited to touch input, Windows 10 is without doubt a desktop operating system at its core. 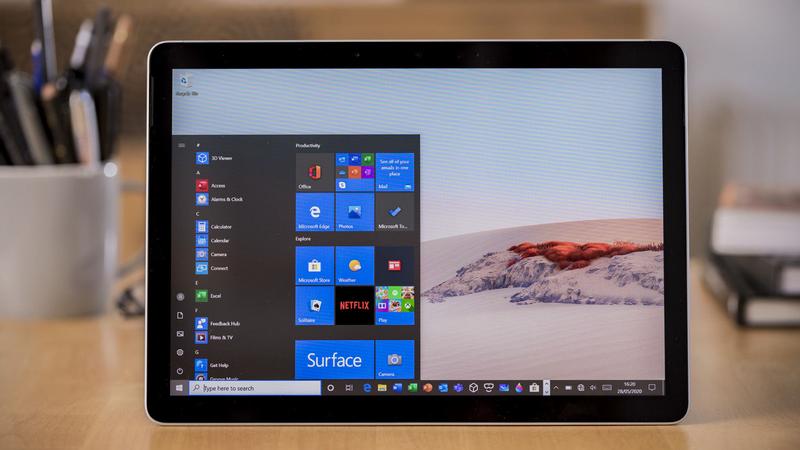 One of the main issues I ran into was the difficulty of accessing controls and time. While in full screen, something that was usually just a click away felt a lot more fiddly. It was quick to transition to auto rotate and display an on-screen keyboard, but the latter was huge and so took up a lot of the screen.

These issues are far from exclusive to the Go 2, so think of this as a commentary on Surface 2-in-1s in general. I’ve always thought of the Surface line as something that can offer what people are looking for in both a laptop and tablet, but after using Windows 10 on the Go 2 I have my doubts.

Microsoft doesn’t quote a specific battery capacity for the Surface Go 2, although it advertises ‘up to 10 hours of typical device usage’. That would suggest a significant increase on the original Surface Go’s 27Wh battery.

Despite being set to maximise performance over battery life, I recorded a hugely impressive 14 hours and 3 minutes in our 720p video loop test, with the screen set to around 120 nits.

However, I was getting significantly less than that while performing more complex tasks, to the extent that I’d be concerned about the Go 2 making it through a full day of usage.

You can set Windows 10 to prioritise battery life, while a power saving mode will kick in at 20% by default, but you’ll sacrifice performance to achieve this.

When it comes to charging the device, I managed to get 29% in 30 minutes from off via the included Surface Connect adapter. That means you’re looking at around 1 hour and 40 minutes for a full charge.

Doubling the RAM and storage on the model I tested takes the price to £529, with the faster Core M3 models starting at £619/US$629.99/AU$1,199, although only LTE versions are available in Australia.

Although technically a tablet, the presence of Windows 10 means the Surface Go 2 is generally considered a convertible laptop. Unless you get the cheapest version, it’s up against the best laptops on the market.

However, unless you spend significantly more than the £399 advertised the performance won’t be up to scratch, and as such I feel similarly-priced laptops offer better value for money.

The Surface Go 2 is one of the most fun devices Microsoft currently makes, but Windows 10 in this form factor creates a number of trade-offs.

At £399 it’s by far the cheapest Surface PC, but at this price performance is severely compromised. As such I’d recommend stepping up to a Core M3 model, although you’ll pay at least £619 for the privilege.

The Go 2 is incredibly thin and light for a Windows 10 PC, but even the larger 10.5in screen will take some getting used to if you’re accustomed to a 13in or even 15in laptop.

The unchanged accessories transform the device into a polished desktop experience, but at around £155 for a Type Cover and mouse they represent a significant additional investment. Using the Go 2 as a standalone tablet does show some of the limitations of Windows 10.

There are plenty of enjoyable and even exciting aspects of the Surface Go 2, but anyone considering buying must be content with these compromises.