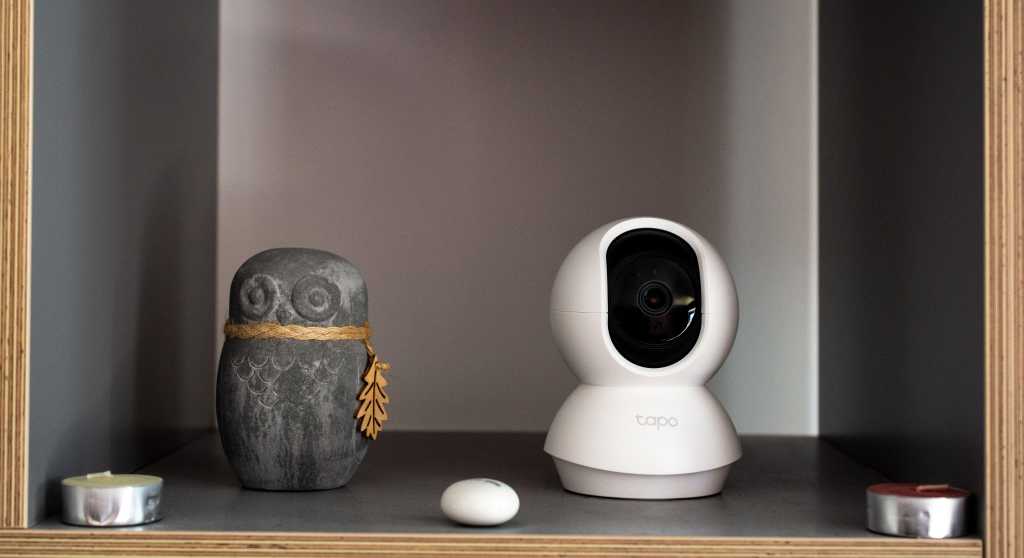 A competitively-priced indoor security camera with pan-and-tilt functionality and great video quality, but the lack of cloud storage may put some off.

Smart security cameras are all the rage at the moment, with manufacturers producing smaller and smarter cameras to help protect the home. TP-Link is relatively new to the smart camera game, but looks to disrupt the market with an impressively cheap smart camera that can directly compete with £100/$100+ alternatives.

Has TP-Link managed to create something impressive enough to tempt users away from established smart camera manufacturers like Ring and Swann? Carry on reading to find out.

While some smart security camera manufacturers are leaning into the design of their cameras, designing stylish kit that compliments the environment it’s in, the TP-Link Tapo C200 sports a much simpler look. The circular ‘head’ is largely nondescript, and the same can be said for the curved base, and those hoping it’d come in a few colours to help match the aesthetic of your room will be disappointed: the C200 is only available in white.

The weighted base means it can stand freely on a shelf, but for those that want true full room coverage, you’ve also got the option of attaching it to the ceiling using the bundled kit. A word of warning though: with a 2m cable and no built-in battery, it’s worth mounting the camera near a plug socket.

Still, though, if you’re not an Instagram influencer obsessed with making every detail of the home perfect, the look of the Tapo C200 is unlikely to bother you – especially when the design allows it to pan and tilt.

That’s right, the C200 moves; the camera has a 114° vertical range and a full 360° horizontal range, giving you complete freedom to look almost anywhere in the room with a tap on the TP-Link Tapo app for iOS and Android. You can manually adjust the angle at any time, or you can set the camera to constantly pan left and right like a traditional CCTV camera.

If you do decide to keep the camera stable, you’ve also got the option of saving your favourite angles in the app, allowing the camera to change position within seconds. I, for example, have separate shortcuts to cover my back door, living room door and front window that I can quickly cycle between when away from home.

The pan and tilt functionality allows you to cover a larger area in more detail than most competing smart cameras on the market, most of which offer a static wide-angle camera typically ranging between 100- and 180°.

The only real complaint is that it doesn’t take advantage of the pan and tilt technology when it detects motion. Where other pan and tilt cameras will follow the source of the motion around the room, the C200 simply doesn’t do this, and I can’t help but feel it’s a wasted opportunity for TP-Link’s budget-friendly camera.

All the bells and whistles of a smart camera

The most important aspect of any security camera is video quality, so let’s start there. Despite the sub-£50 price of the Tapo C200, the quality produced both during the day and at night is surprisingly clear. The camera is capable of recording 1080p video, and a built-in 850nm IR LED allows you to see up to 30ft away at night – more than enough for most rooms in the home.

Shooting at 15fps, the video is admittedly not quite as smooth as some alternatives, but there’s a lot of detail on offer here – you can even pinch-to-zoom in the app without too much of a negative effect on overall quality. There’s full colour recording available during the day, and although it’s limited to black and white when night vision is enabled, there’s no real downgrade in terms of overall quality. You can still make out relatively minor details in a night time recording, perfect for keeping an eye on the home when you’re away.

So, how can the cheap security camera capture such detailed shots? While most other smart cameras utilise cloud technology for video recording, which relies on your internet connection, the C200 uses a built-in microSD card (which isn’t included in the box, sadly) to record footage. That’s great news in terms of video quality, and also allows the C200 to record constantly instead of only when motion is detected if you prefer, but there’s also a big drawback.

The reliance on local storage means there’s no remote cloud backup to store a secure copy of the footage, so if an intruder destroys the camera or removes the microSD card, you won’t be able to see what was captured.

There is a built-in siren to deter intruders that you can program to auto-trigger when motion is detected, but it’s not what I’d call a proper siren. Instead, it sounds more like an alarm being played on a cheap Bluetooth speaker – it’ll likely surprise any trespassers, but it won’t be ear-piercingly uncomfortable like the 110db screech of the Ring Indoor Cam.

The accompanying app can make or break a smart camera experience, but thankfully, the TP-Link Tapo app for iOS and Android is well designed, but it does lack a few features we’d expect to see.

The app allows you to view a livestream of the camera, as well as review captured footage in a timeline view, use the two-way talk functionality to chat to anyone you might see, enable a privacy mode that disables recording and customise motion detection and alerts.

It’s when it comes to the latter, limitations immediately become apparent.

While you can customise the motion zones to avoid false motion alerts, there’s no way to snooze motion alerts for specific periods of time – you can only get all notifications, all the time or no notifications ever, and that’s not ideal if you’ve got the camera set up in a busy living room. You can disable motion detection on a schedule, but this stops the camera from recording footage as well.

This is something that could be fixed in a software update, so we hope you’re listening, TP-Link.

Despite all that the TP-Link Tapo C200 offers, it’s surprisingly wallet-friendly at £39.99/$26.99 from Amazon in the UK and US. That’s much cheaper than the likes of the £169.99 Logi Circle 2 and even Ring’s £49/$59 budget-focused Indoor Cam, with TP-Link’s option offering more advanced features like pan and tilt support and the ability to view recorded footage without a costly monthly cloud service subscription.

If you want a better idea of the alternatives available before parting with your hard-earned cash, take a look at our selection of the best smart security cameras.

The TP-Link Tapo C200 offers superior coverage thanks to pan-and-tilt support, providing 360° horizontal coverage and 114° vertical coverage in any indoor space, the video quality is detailed both during the day and night, there’s 30ft night vision on offer and the accompanying app is largely well built, if not lacking one or two handy features.

The dealbreaker for some is the lack of cloud storage; while it means you won’t be forking out a monthly fee to store video, it does mean that your footage will be lost if the camera or microSD card are destroyed.

Still, for around £40/$27, it’s an absolute bargain and a cheap way to help secure your home.