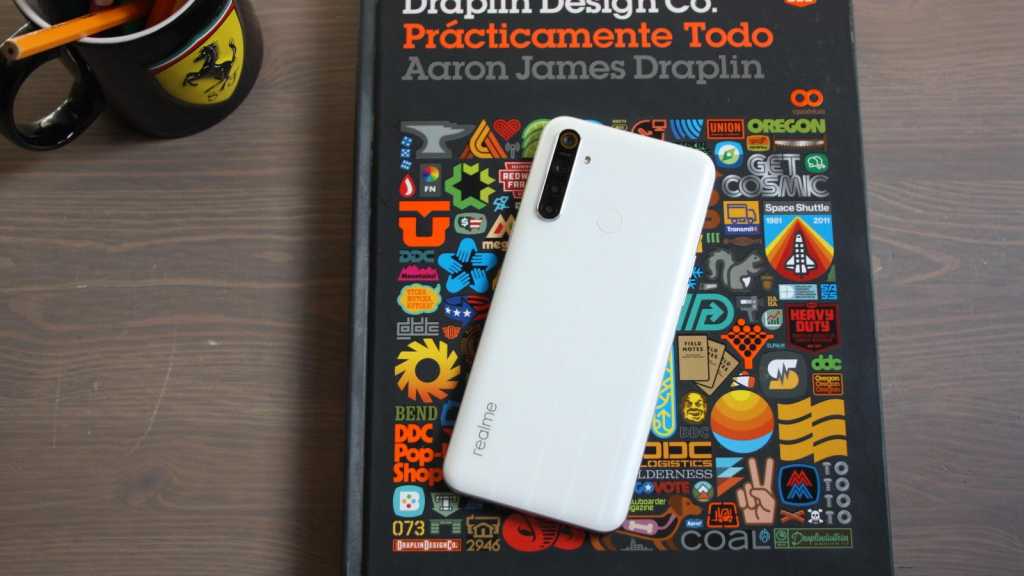 Compared to its older brother – the Realme 6 – the 6i loses out on a few things, but a big battery and surprisingly-premium features like NFC and a quad-camera setup still make this a compelling affordable buy.

With the mid-range and affordable spaces being the real battlegrounds in 2020’s mobile market, Realme is working hard to make sure it has as many contenders in the game as possible. Queue another addition to the Realme 6 family – the Realme 6i.

There are comparisons to be drawn with the confusingly-recent Realme 5i, which shares in a similar screen size, camera setup and impressive battery, but lacks some subtle enhancements, such as more capable fast-charging.

There are a number of physical similarities across the 6 series – namely dictated by their shared screen size (between 6.5 and 6.6in), so it’s the finish that is the easiest way to tell them apart.

Realme is never on to shy away from eye-catching colourways and depending on where you pick one up, the 6i comes in Cream White (pictured), Green Tea or an eye-watering Blue Soda.

While we’ve sen waves and even lightning bolts, the Realme 6i opts for vertical bands set within the optical patterning on its back, which play nicely against the light.

From a design perspective, the phone’s affordable nature is most obvious in the abundance of polycarbonate throughout the design. It doesn’t offer as premium a feel as glass or metal but it repels fingerprints well and will likely hold up against scratches and scrapes more readily over time. The 6i is also fairly bulky, measuring in at 8.9mm thick and 199 grams.

Unlike the Realme 6 and Realme 6 Pro that have a side-mounted fingerprint sensor, the 6i keeps its sensor central to its back – a location that better accommodates left and right-handed users equally.

The 6i is also a good indication of how far the affordable phone market has come thanks to the inclusion of USB-C at its base, which is both more resilient and reversible for added convenience.

Arguably the biggest sacrifice for those that choose the 6i over the 6 comes with the former’s display.

Both leverage a 6.5in IPS LCD panel but the £30 difference between the two costs you the privilege of Full HD visuals and that next-generation high refresh-rate technology which is currently popular in the flagship space.

In the case of the 6i, its display only supports HD+ (1600×720) resolution and a 60Hz refresh rate (compared to the 6’s smoother 90Hz). Brightness if fine in day-to-day use but could be brighter when up against direct sunlight, while viewing angles aren’t abysmal but don’t really impress either.

The centrally-positioned front camera hangs down from the top bezel with a waterdrop design in place of a hole punch, which is ultimately a matter of personal preference over engineering superiority, from a buyer’s perspective.

As for audio, the great news is that you’ll find a 3.5 mm headphone jack set into the phone’s frame and the 6i also supports an FM radio too.

In 2020 it’s worth noting that you don’t need to spend a fortune to get your hands on a half-decent camera phone.

This is unquestionably true of the 6i, which boasts a quad-camera arrangement fronted by a wholly-capable 48Mp primary sensor.

In well-lit environments, shots offer good exposure, with a surprisingly wide dynamic range considering this phone’s price point, while the vivacity of colours is decent too.

Drop the lights down and things, unsurprisingly, fall apart when shooting in Auto, pushing you to rely on the camera’s additional shooting modes instead to get something usable.

The 2Mp macro sensor is genuinely able to pick up good detail from close-up subjects, just don’t expect to be able to crop in without seeing noise and grain rear their heads immediately.

There’s also an 8Mp ultrawide-angle camera with a 119-degrees field-of-view that adds welcome versatility to the 6i’s photographic experience.

A single button within the viewfinder lets you quickly jump between 1x, 2x and 5x zoom levels, as if the phone sported a dedicated telephoto sensor (which it does not). While quality understandably drops as you push in, the results photos are, in most cases, still acceptable.

Within that dewdrop on the front sits a 16Mp sensor that impresses with general image quality (provided there’s enough light on offer) but also as a result of its rich feature set, which includes robust virtual beauty tools.

You can enlarge your eyes, reduce the size of your nose, adjust your chin and even shrink your entire face – just remember, your natural beauty is really what matters.

If you’re considering the 6i for its video chops – which top out at 1080p quality at 30fps – it’d be better to look elsewhere, with underwhelming image stabilisation that leaves a lot to be desired.

Although Realme pitches the 6i as an inexpensive, entry-level mobile, it actually packs enough punch to play most of the mobile games you’d likely throw at it.

In an interesting move between the 5i and the 6i, Realme swapped from Qualcomm’s hardware to the octa-core MediaTek Helio G80, which in practice seemed to be up to the task for most of the scenarios we threw at it without incident.

What’s worth noting is that the phone can be found in both 3GB and 4GB flavours – when talking about RAM. If you have the choice, the latter is the way to go to ensure as smooth a user experience as possible.

The battery is undoubtedly one of the highlights of the Realme 6i’s makeup and one of the main reasons to pick one up if you live your life in constant fear of your current phone giving up the ghost before the day’s end.

The phone’s impressively-large 5000mAh cell twinned with the fact that the 6i only offers up to 720p visuals result in minimal power drain over time.

In our GeekBench battery tests, we obtained a high score of 5,980, with a screen-on time of 9 hours and 58 minutes. In real-world testing, this means the 6i is able to dole out up to two days of use on a single charge without issue.

The 6i’s improved 18W VOOC Flash Charging isn’t going to blow your socks off compared to Realme’s flagship sibling (the X50 Pro), with its insane 65W charging, but it does allow you to break past 35% charge in 30 minutes and a full charge in 2 hours, 15 minutes.

Getting real with Realme UI

It’s evident that Realme UI – the company’s user experience laid on top of Android 10 – has come on leaps and bounds from its origins as Oppo’s Color OS. It feels lightweight and visually cleaner, with less bloat out the box.

Despite the phone’s humble underpinnings, the UX feels fluid, with minimal lag and stutter, even when jumping between apps. It most obviously struggled when scrolling within the web browser but these instances were minimal at best.

Realme is on the right track by including features like Games Space, offering a night mode for late-night viewing and generally emulating aspects that other phone makers, such as Xiaomi or OnePlus, have already delivered.

The 4GB RAM/128GB SKU of the Realme 6i we tested clocks in at a wholly respectable £189. You may find the 3GB model even cheaper out on the wild but we’d suggest you give it a miss, based on performance concerns.

It can be had, direct from Realme’s website and from the company’s web store on Amazon UK, where amazingly, the price had already started to drop even lower (£170 at the time of writing).

This is probably the most affordable phone worth buying with a 5000mAh battery, which in itself is a potent selling point.

As with most of Realme’s more affordable entries, the Realme 6i brings an impressive feature set to the table that you simply wouldn’t expect at this price point.

Sure, it loses out on the Realme 6’s 90Hz display and the jump from 10W to 18W fast charging between the 5i and the 6i isn’t groundbreaking but battery life is superb and inclusions like NFC (for things like mobile payments) don’t always materials on phones of this value – considering Xiaomi’s Redmi Note 9S for example.

Provided you’re comfortable with the mediocre screen quality, there’s plenty of enjoyment to be had from the Realme 6i.