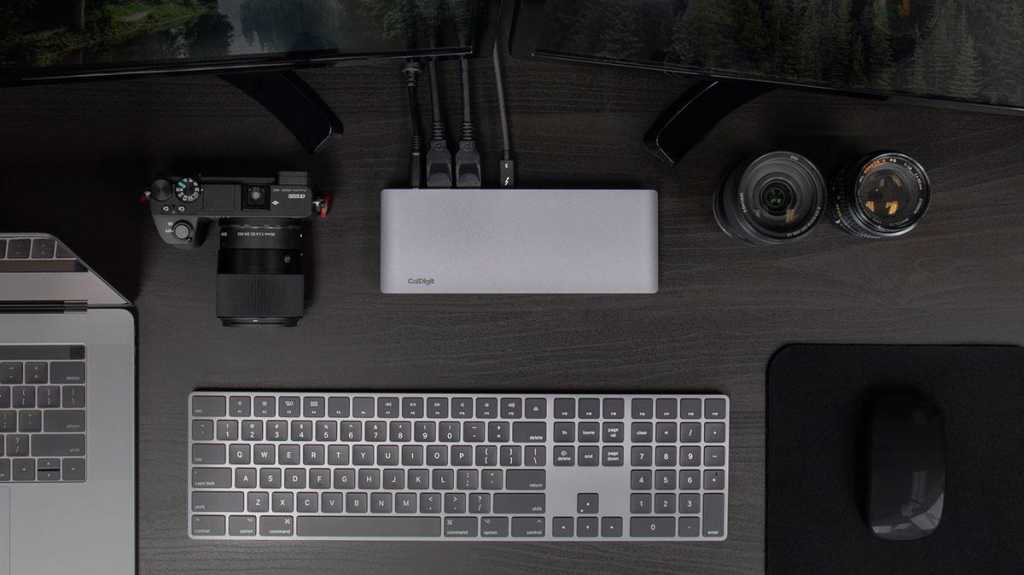 The Caldigit USB-C Pro Dock is a well-built, full universal Thunderbolt 3 and USB-C docking station that offers all the ports you need to create a full desktop experience for a laptop, whatever its connection type.

USB-C and Thunderbolt 3 docks are great for expanding a laptop into a larger desktop setup, adding multiple ports missing from the laptop and connecting one or more external displays.

To add an older USB-A device, such as a memory stick, hard drive or wired keyboard, you need to get your hands on at least a USB-C hub. See our roundup of the best USB-C hubs and adapters.

But a full docking station offers much more – such as multiple display and USB ports, and its own power supply that charges the laptop via the same cable that delivers the data. See our roundup of the best USB-C docking stations.

Simply connect the laptop to the dock, and all those ports become available to you. You can hook up and disconnect with just one cable. If you have one at home and one in the office, you can move between both places and be working in desktop mode within seconds.

Thunderbolt is a higher-bandwidth variant of USB-C. The connectors look exactly the same, but TB3 and TB4 are up to 8x faster.

A Thunderbolt laptop will work with a plain USB-C dock, but by doing so it will give up Thunderbolt’s superior bandwidth: 40Gbps compared to USB-C’s either 5Gbps or 10Gbps, depending on which standard it uses.

However, a USB-C laptop won’t always work with a T3 dock… unless it uses the very latest technology, such as the Titan Ridge (TB3) or Gosheridge (TB4) chipsets that allow the dock to work on both Thunderbolt and USB-C.

One such hybrid or universal TB3/USB-C docking station is Caldigit’s USB-C Pro Dock. Using it, Thunderbolt laptops run at full bandwidth, and USB-C laptops can hook up to the same dock and work just fine at their own speed.

This is especially useful in situations where you have both USB-C and Thunderbolt laptops in a mixed office environment, for example. Hot-desking users can then swap in and out both types of laptops without having to find a specific docking station.

The Pro Dock has a 150W power supply, so it can power devices connected to all its ports. Contrast this with a humble non-powered USB-C hub. A hub might seem like it has it all, but it will quickly be overwhelmed when it comes to power.

Most simple USB-C hubs draw their power from the laptop, and that will offer only 15W – so a multi-port non-powered hub is soon going to feel the strain. Even a powered hub won’t have anything like the 150W of power that a dock such as the USB-C Pro has behind it.

The dock can also charge connected USB devices – such as a phone, tablet or smartwatch – at up to 7.5W without the laptop connected.

If you want to use HDMI monitors, you’ll need DisplayPort to HDMI adapters.

The host computer determines the feature set of the dock.

A Thunderbolt laptop can use the dock at full 40Gbps bandwidth, and connect two 4K monitors at 60Hz.

A USB-C laptop can connect at up to 10Gbps, and power two HD displays, or one 4K monitor at 30Hz.

You can even use the USB-C Pro Dock with a USB-A laptop, as long as you use a USB-A to USB-C adapter or cable. It won’t, however, be able to run a second display or be charged from the dock – but it can access the extra USB ports, SD card reader and audio.

It will also work with Apple’s iPad Pro or a compatible USB-C smartphone, connecting a 4K monitor at 60Hz (the iPad Pro doesn’t support dual monitors, sadly), plus USB-A (for mouse and keyboard, for instance) and USB-C ports, Gigabit Ethernet, SD reader, and fast charging.

Note: Some Windows TB3 laptops support only one DisplayPort stream, meaning they can output only up to a single 4K at 60Hz or dual 4K 30Hz monitors – so check TB3 port capability with your Windows laptop provider. 12in Apple MacBook models have just one USB-C port, so can only support dual monitors in mirrored mode. Also, some Windows USB-C laptops don’t support charging over USB-C, so again check with the manufacturer.

While very few USB-C docks are compatible with Apple’s SuperDrive DVD writer, Caldigit’s Pro Dock will do so with a simple driver installation.

Caldigit also offers a top-end Thunderbolt Station 3 Plus (TS3 Plus), which isn’t a hybrid so won’t work with USB-C laptops. However, is it better for Thunderbolt 3 owners?

The TS3 Plus features five instead of the Pro Dock’s three USB-A ports, but three at one time should be enough for most users. The TS3 Plus has five USB-A and two USB-C ports, whereas the USB-C Pro Dock has three USB-A and one USB-C. Read our full Caldigit TS3 Plus review.

Since the USB-C Pro Dock is a single- port TB3 dock it can only be used in a daisy chain if it’s at the end of a daisy chain. TB4 offers more sophisticated Thunderbolt daisy chaining.

The TS3 Plus can also be connected to USB-C monitors – not possible with the Pro Dock as its USB-C ports are for data only because it has dual video ports built-in and T3 is capable of a maximum of two monitors.

Another display benefit of the TS3 Plus is its ability to connect a single 5K monitor (at 60Hz), which the USB-C Pro Dock cannot.

The main selling point of the USB-C Pro Dock is that it will work on Thunderbolt and USB-C laptops, and that it has two video ports built-in. However, not everyone needs dual monitors and would prefer to have a spare Thunderbolt port.

(A Thunderbolt 4 dock can have three downstream TB4 ports, plus the upstream Tb4 link to the computer, so is more flexible.)

So for an all guns blazing TB3 docking station, the TS3 is it. But the Pro Dock is close in terms of features, cheaper and capable of hooking up to a USB-C laptop if required.

It’s a well-built universal Thunderbolt 3 and USB-C docking station that offers all the ports and bandwidth you should need to create a full desktop experience for a laptop, whatever its connection.