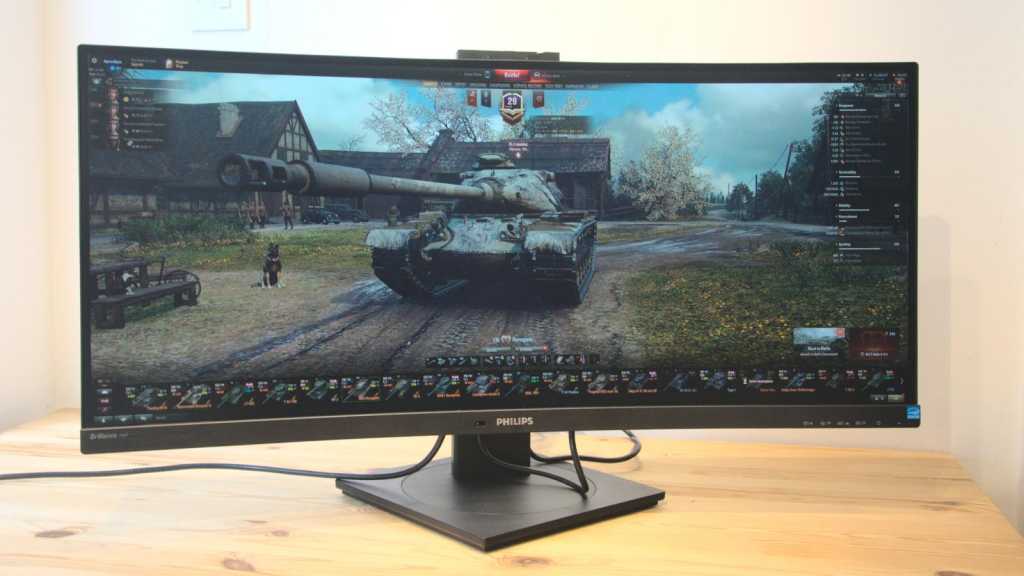 Its support stand might have been better designed, but in other respects the Philips Brilliance 346P1CRH has some unique features that are ideal for those that use multiple computers or a laptop at work. The combination of features also make it a compelling monitor for gaming, too.

The monitor market is now so competitive that it is not enough for a product to focus on a single small group of potential purchasers. Products must have a broader appeal and be less niche.

Where a solution like the new Philips Brilliance 346P1CRH might have been a business-only proposition selling at a higher price point a couple of years ago, today it has something to offer both the home and office user and is highly affordable for either.

Are you looking for something extra wide, perhaps to replace a couple of existing panels or handle two machines though one monitor?

Then the Philips Brilliance 346P1CRH might be the perfect option.

Having unpacked a few ultra-wide monitors recently, I’d be the first to warn anyone buying them that getting out of the box and on the stand is a two-person job.

The Philips Brilliance 346P1CRH comes in three parts, with the display, support arm and foot to be assembled before lifting it is out of the packaging. No tools are required, but the sheer scale and a centre of gravity that outside the physical bounds of the screen can make handling it an awkward exercise.

Once you’ve got it in a single piece, and positioned on the table, this is an imposing piece of equipment that provides a single 34in wide, 21:9 ratio display. The support arm allows it to be raised, lowered, tilted and twisted by varying amounts.

However, there isn’t enough vertical travel for the screen to be placed into portrait mode, and with this aspect, it would look very odd if you achieved that using a wall mounting.

The screen is just 33cm (13in) high, but a whopping 79cm (31in) wide, making it the same aspect as the original Ghostbusters movies and the Matrix trilogy, among others.

With a 1500R curve ratio, the optimal distance for viewing this panel is 1.5m or nearly 5ft. You can be closer, but the screen will look curved, only at about 1.5m will you be equally close to the centre as the edges. That’s a very deep desk, and you might have difficultly reading documents on the screen that far away.

Before I move on to talk about the display in detail, this model has a feature I adore, and it’s not something I’ve seen on any another previously.

Computers, tablets or phones can be connected to it using either DisplayPort, HDMI or USB-C. And, if you connect using USB-C, you can use the USB hub to connect to the onboard Ethernet port, webcam and any USB peripherals that you’ve connected to the other four USB type-A ports.

For laptop owners, this avoids the need for a docking station, and they can also charge their computer with the same connection. Given the cost of docking stations, this could be a major saving for an office deployment and a strong justification for only buying portable systems with USB-C connectivity.

As useful as that feature is, it would be a moot point without high-quality panel hardware, and this monitor doesn’t disappoint there.

I already alluded to the awkwardness of assembling this screen, and the support arm isn’t the best aspect of this product.

What it does offer is plenty of vertical travel, so much that the top of the column appears over the monitor when at the bottom end of its extent. But it has no cable management, and the parts that you might need to hold to move the screen have some sharp metal edges to discover.

It also contributes to how difficult a screen like this is to cable quickly.

In the typical orientation, it is challenging to attach cables without being able to see the ports. Getting a view of them is practically impossible without either laying the monitor down or having a mirror handy.

This design also uses a plastic cover to hide the inputs after installation, making it even more of an exercise to add a cable with this in place.

Another feature that I found irritating was the OSD menu, driven in the time-honoured method of seven buttons (yes, seven!) mounted on the bottom-right edge of the display. If the buttons are on the right, why does the OSD menu appear in the middle of the screen, a relative country mile away?

This proved exceptionally annoying when I came to analyse the display using our calibration software, as it requires the sensor to be in the exact place that the menu appears. I prefer joysticks or menus that sit over the buttons, to make it obvious which ones to press, and this screen surely needs one or the other.

One design choice I like is how the webcam ha been implemented. It has a modest 2Mp specification, but it is Infrared sensitive and therefore suitable for Windows 10 Hello visual identification – an easy way to log into your PC.

The camera and its associated microphone are mounted inside a pocket at the top centre of the panel. Pressing the camera top will release a catch allowing it to spring up. When in use, a light indicates it is active, and you can make some small adjustments to the vertical viewing angle.

The only caveat to the camera design is that you can easily tilt it up, but it won’t point downwards any more than the -5 degrees that the panel with pivot forwards.

However, the star of this show is undoubtedly the KVM (Keyboard, Video, Mouse) capability. The way it is implemented, using the USB-C input and USB-up port from two different computers, is clever. With two computers attached any USB peripherals (mouse, keyboard, etc.) can be quickly switched between them along with the screen that has peripheral focus.

You can also configure through the OSD, PIP (Picture-in-Picture) to make the screens of both computers visible simultaneously, even if the USB devices are only active on one.

The only mistake here, to my mind, is that you need to use the OSD to switch. Where a small app on each machine with a hot-key to flip between would have been more elegant than pressing buttons.

Screens that use VA technology have traditionally positioned themselves as the middle ground, providing good but not exceptional colour representation and quick but not TN technology refresh rates.

The VA technology panel in this product demonstrates well just how far panel makers have come in terms of colour representation and display clarity in the past few years. It’s crisp, the colours are punchy without being flamboyant, and there is very little evidence of bleeding or frame shadows.

The natural resolution of 3440 × 1440 might seem remarkably close to 4K, but it isn’t. Where a full 4K panel has more than 8 million pixels, this panel has less than 5 million.

But, that might be a good thing if you want to use this monitor for gaming, as it reduces the power of the GPU needed to drive the screen at the native resolution an optimal 60fps, and up to the maximum 100Hz refresh that this hardware supports.

That it supports adaptive sync through AMD Freesync is ideal, and I enjoyed playing some FPS titles at native resolution with an Intel Core i5 processor and an Nvidia 1060 GTX discrete GPU.

A discrete GPU is an essential requirement for getting the most out of this design. Because an integrated GPU, like those provided with many Intel systems, just doesn’t have the power needed to present 4K content scaled for this aspect smoothly.

If you’re not expecting to use this for video editing, an integrated GPU should work, but it won’t be gaming at native resolution effectively.

This display is HDR 400 compliant, but don’t purchase it based on this standard. Yes, it will present HDR content, but it’s not got the localised backlighting or brightness to do anything that might embarrass a branded OLED TVs.

According to Philips, this panel has good colour representation with 120% of sRGB, 90% of DCI-P3, and 88% of the Adobe RGB colour gamut ranges.

Analysis revealed that these numbers are mostly accurate, and the DCI-P3 range is closer to 94%, an excellent gamut for a screen that isn’t explicitly designed for colour accuracy.

The uniformity of colour over the whole screen is generally good, although it has some small issues with how the backlight is distributed over the panel. The centre is the brightest with most of the corners being between 7% and 12% darker. For whatever reason, the bottom right is up to 18% darker, in some scenarios.

What makes this much less evident to the reviewer without a calibration sensor is how bright it can be, with a quoted brightness of 500cd/m2. In tests it was never that bright, being closer to 400cd/m2, but it is substantially brighter than most VA panels, and the contrast levels are great.

Overall, the colour and contrast available here is much better than I was expecting, and it borders on being useful to those that work with colour.

The MSRP for the Philips Brilliance 346P1CRH is £499 in the UK, although it is only currently available via Insight at a higher price or European stock via Amazon at much higher than the RRP.

Ebuyer has the slightly older and lower spec 346B1C at £486 but it’s worth waiting for the P1 to arrive properly. Philips says it will be available via Amazon and  Overclockers ‘soon’.

Typically we’d mention a few competitor products at this point. But, panels of this scale, resolution and capability are often dramatically more expensive, and most lack the exceptional features of this design.

While the 346P1CRH isn’t perfect or for everyone, it is a competent screen with lots of appeal for gamers and business users alike.

It could be better is in respect of the OSD and its button arrangement, in the ergonomics of the support arm, and the tilting limits of the webcam.

I also think it needs to consider cable management, as there isn’t any provided on a monitor that could easily have a large number of wires connected to it.

If you are willing to accept those fairly minor flaws, and that the vertical aspect of the screen is rather small when compared with the width, then you might find this panel has many other great features.

The undoubted highlight of this solution is the inbuilt KVM (keyboard, video and mouse) switch, which when combined with PIP (picture-in-picture) enables a single screen with two computers but a single mouse and keyboard without any additional hardware.

You could easily spend more than half the cost of the 346P1CRH on just a KVM and docking station alone, making its relatively low price even more compelling. When you factor the quality of construction and parts, the argument for getting one of these is even stronger.

While not everyone wants or needs a screen this large, for those that do the Philips Brilliance 346P1CRH is a remarkably useful piece of equipment that is surprisingly cheap.