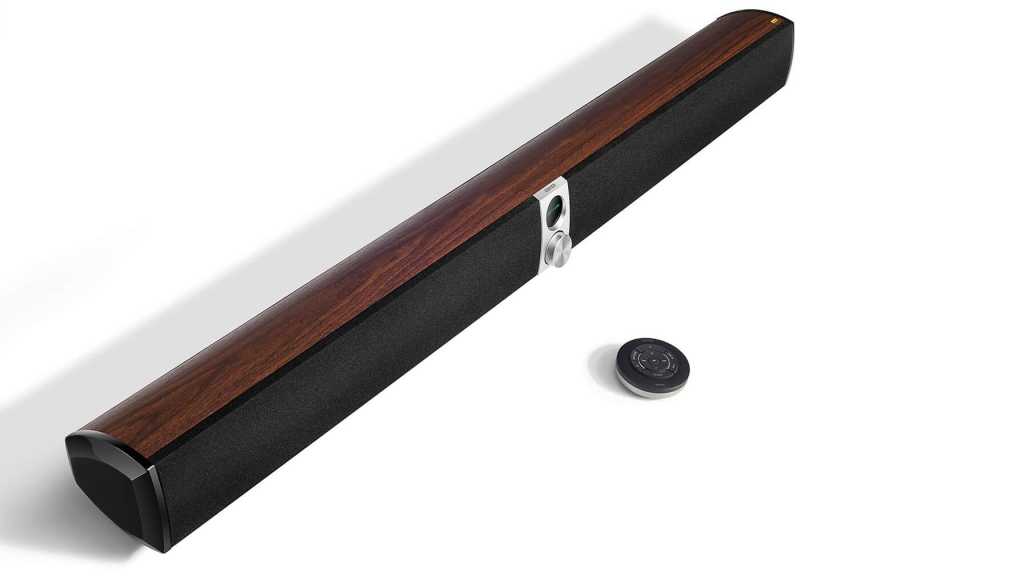 The Edifier S50DB may not boast the smarts of similarly-priced competitors, but it more than makes up for it in the design and audio department. It sports a gorgeous dark wood design that stands alone in a sea of metallic soundbars, and the audio is crisp and clear with decent bass despite the lack of a separate subwoofer.

It might not have the same brand recognition as soundbar manufacturers like Bose and Samsung, Edifier has been making waves in the soundbar world with the Edifier S50DB. Offering a completely different design to most other soundbars on the market, great audio quality and a tempting price tag, should the Edifier S50DB be your next purchase?

I’ve spent a lot of time using the Edifier S50DB soundbar, and here’s what I think.

While most soundbars on the market in 2020 have gone all-in on the high-tech look, the Edifier S50DB takes things in a classier direction. The bulk of the soundbar is made from a dark brown wood casing, which, as well as offering a refreshing change in soundbar aesthetic, should improve the audio performance – according to Edifier, anyway. That dark wood design is complemented by a sleek metallic silver strip that runs down the centre of the speaker, black speaker covers and shiny plastic black ends.

The old-school look continues with the controls; rather than opting for touch-capacitive buttons like a lot of other soundbars, the S50DB features a single physical dial with a particularly satisfying click for volume control (and just about everything else). You can click the dial to change the source, and pressing and holding the dial controls the soundbar power. The on-board controls aren’t as extensive as some options, admittedly, but the end result is a clean-looking soundbar unencumbered by buttons and dials.

It’s not all low-tech though, featuring a circular LCD display that’s more than large enough to see what’s being displayed without being the centre of attention. My only real complaint is that it’s quite bright and displays an EQ animation during playback, which can be annoying if you’re using the soundbar to play white noise when trying to sleep at night. It can’t be just me that does that…

But while it’s described as a great solution for those with minimal space on the Edifier site, I’d argue that it’s anything but. It measures in at 1.13m long with a width of 13.7cm and a height of 11cm, and is likely to take up a huge chunk of space in front of the TV, so it might be time to move those nicknacks and measure your space before putting money down. It’s actually longer than my TV unit, so the S50DB hangs off on either side. It doesn’t affect the performance, but it doesn’t look ideal either. 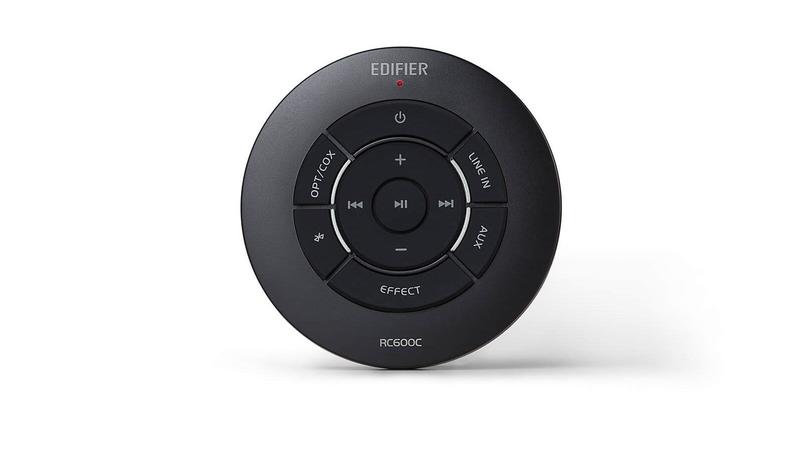 That simplistic design aesthetic is also present on the remote. The little circular remote fits comfortably in the palm of the hand, offering a nice change from tall, complex remotes that usually ship with soundbars, but that charming simplicity is also its downfall.

Though you’ll find basic media playback buttons, access to the various sources and a button to change the EQ, it lacks other basic controls like mute – something I didn’t realise I used so often until I didn’t have it on my remote. You can always turn the soundbar off, but it takes a few seconds to power back on, so it’s not the ideal fix for a quick mute.

The IR receiver on the soundbar is also difficult to locate, meaning you’ll often find yourself frantically pressing buttons while waving the remote around trying to adjust the volume.

Not the smartest speaker around

The Edifier S50DB is pretty versatile, offering optical and coaxial inputs alongside line in, aux in and Bluetooth support, but that’s fairly standard stuff for soundbars. There’s a lack of HDMI input, which some prefer to optical cables (especially if you’ve got a TV without an optical port) and you won’t find a USB port for music playback either, which is a bit of a disappointment when you consider the S50DB features official Hi-Res Audio certification.

You won’t find Chromecast or AirPlay support either, but then again, that’s a rarity at a soundbar available for less than £250.

It’s not the most connected soundbar I’ve used in 2020 then, but the lack of smarts allows the S50DB to focus on great audio performance. That’s arguably the most important area when buying a soundbar, right?

Booming bass without a sub

When it comes to audio performance, the Edifier S50DB really delivers. The four titanium tweeters produce crisp, precise audio with great clarity regardless of whether you’re watching a movie or listening to your favourite tunes, and that’s backed up by two mid-range bass units. The 70mm drivers are fitted with double lead tube outlines to offer enhanced bass output, and while it doesn’t provide quite the same level of oomph and sound separation as what you’d get from a dedicated soundbar and subwoofer combo, I’d argue that it’s plenty for the average consumer’s needs.

Besides, you’ve always got the option of hooking up your own sub with a dedicated subwoofer out port on the rear of the S50DB if you really need that room-shaking bass. 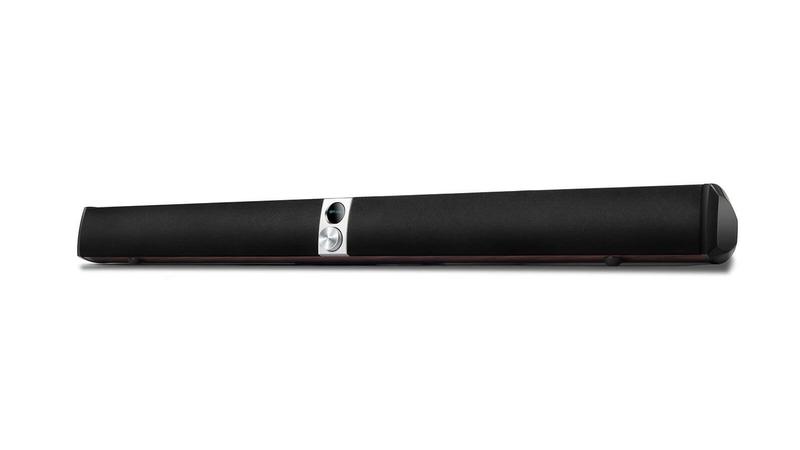 The output can be tweaked via three EQ presets – music, movies and news – but there’s no way to adjust things like bass and treble manually, so you’ll have to deal with the S50DB’s presets. These do admittedly perform well, with the movie mode tweaking the output of vocals and bass to enhance speech and the music mode providing a more rounded experience, but I can’t really work out why there’s a mode dedicated to news. It dramatically decreases the bass and tweaks vocals to sound a little thinner, and although bass isn’t important when watching the news, I’ve never thought “cor, Tom Bradby is sounding a little bassy today”. But hey, if you need it, it’s there.

With all that said, the S50DB does offer a marked improvement on the audio on offer from most TVs, and it certainly does a good job at projecting audio around the room. It’s not the same as true surround sound, of course, but it’s a decent alternative for those looking for a simple audio setup.

At £249.99, the Edifier S50DB isn’t the cheapest soundbar on the market, but I think there’s enough here to tempt consumers away from more established soundbar brands – especially if you’re not too fussed about high-end connectivity options like AirPlay and Chromecast. It’s £70 more expensive than the £179.99 Anker Nebula soundbar, and while Anker’s option boasts a built-in Amazon Fire TV, the audio quality is simply not on the same level as what’s on offer from the S50DB.

It’s also worth pointing out that you can get soundbars with separate subwoofers at a similar price if you’ve got a particular penchant for bass, with the likes of the Yamaha YAS207 available for £289.

If the Edifier S50DB does tick your boxes, you can pick it up exclusively from Amazon in the UK. To see how it compares to the competition, take a look at our selection of the best soundbars.

It might not have the smarts of some competitors, but make no mistake, the Edifier S50DB is a great soundbar. It stands apart from the competition in terms of design, using a dark brown wood housing to give it a classy look, and the audio performance is largely impressive for the price. It doesn’t offer the same room-shaking bass as some soundbar and subwoofer combos, but if you really need that intense bass when watching movies, you’ve got the option of hooking up your own separately.

It might be expensive for some consumers, but it’s actually quite affordable when looking at the wider soundbar market. And, like with many audio products, you get what you pay for in terms of quality.