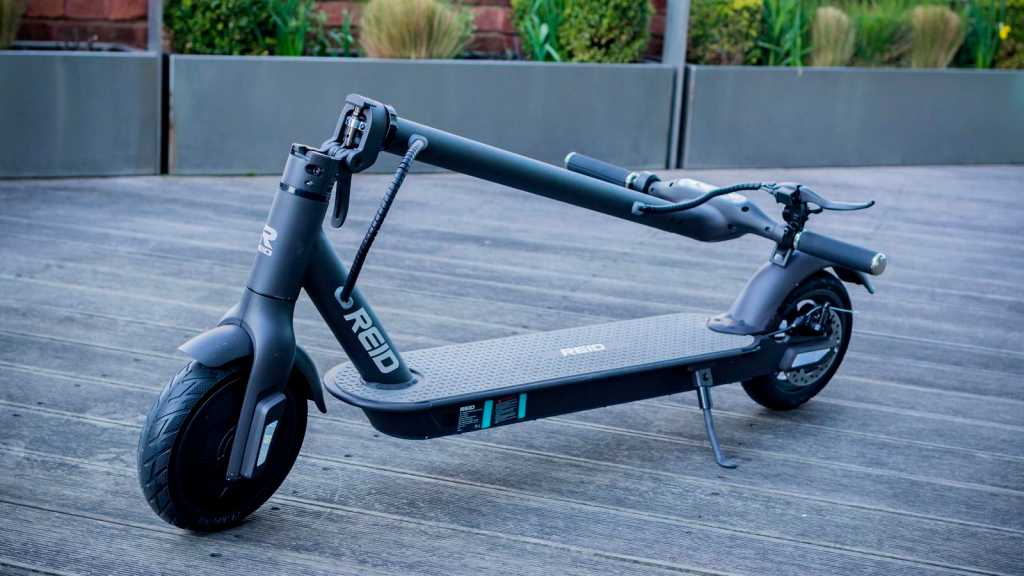 The Reid E4, though slightly more expensive than the competition, offers a more premium experience throughout, from the ergonomic design of the scooter to the performance on offer. The 250W motor powers the experience, with three modes to choose from, although solid tyres mean you’ll likely feel every bump and dip on the road.

Electric scooters are quickly becoming the mode of transport of choice for a growing number of people around the world, offering an enjoyable, environmentally-friendly alternative to cars and other forms of public transport.

Reid is the latest brand to throw its hat into the ring with the release of the Reid E4 and E4 Plus in the UK. Previously focused solely on bikes and eBikes, can Reid use its expertise of eBikes to develop a better class of electric scooter? While it’s not perfect, the Reid E4 is certainly a great option for commuters that want to see more of their local area.

Before we get started, it’s worth stressing that eScooters are currently illegal on UK roads and pavements, and can only be driven on private land, although that could change in the near future. We outline the current UK eScooter law separately.

A stylish eScooter with all the trimmings

Reid’s E4 electric scooter looks different from most of the competition, both in terms of design and the accompanying app which, surprisingly, is pretty handy. While the majority of eScooters sport the same general design, Reid has taken things a step further to make sure you’ve got the best experience possible.

It has all the standard features of an electric scooter, including a headlight, side reflectors, a brake light (although this one lights up!) and a kickstand, but what you won’t find elsewhere is the sheer number of customisable LEDs embedded in the aluminium body.

Like the boy racers of the early noughties, the E4 sports downward-facing LEDs that’ll light the road around you, along with an ambient LED that surrounds the headlight. These are customisable, of course, and can be tweaked both in terms of colour and brightness via the accompanying Reid Mobility app for iOS and Android.

Along with customising the LED array via the app, it’s where you can also look at previous trips on a map overlay, get an idea of total trip distance on a single charge, lock and unlock the scooter (it can’t be turned on but it can be wheeled away, so don’t leave it unlocked regardless!) and more. Most of the features, like switching between riding modes and toggling the headlights, can be done via the scooter itself, but there are a few settings you can only access via the app.

It’s the small details that complete the high-end look Reid is going for, like the comfortable rubber grips on the handlebars – complete with a mirror-like metal finish – and unique display, although the clean look is slightly let down by a couple of cables that run along the exterior of the scooter.

The slightly tilted 76.5-degree angle of the handlebar provides a more comfortable ride over longer journeys compared to generic scooters that sit at, or close to, 90 degrees. Not reaching so far forward to hold the handlebars when riding means you can relax your shoulders a little more, and the comfort is further aided by the seemingly perfect height of the handlebar and the large deck. For reference, I’m 6ft1, so it might not be perfect for everyone. The height of the handlebar isn’t adjustable, but that’s not really a surprise – none offer that ability right now.

You’ll find a custom-shaped display on the handlebar that displays useful information including battery level, power mode, Bluetooth status (for the accompanying app) and, crucially, the ability to display speed in both km/h and mp/h – music to my ears in the UK, as just about every other scooter deals exclusively in km/h.

It’s also IPX4 water-resistant according to Reid, so you shouldn’t worry about the occasional splash of rain, but I wouldn’t recommend riding this, nor any electric scooter, in more than light drizzle.

Like most electric scooters, the Reid E4 folds down within a few seconds, making the transition from eScooter to public transport easy enough, and the folding mechanism is made from stainless steel, so it should be pretty durable. It’s not the lightest bit of kit at 13.1kg though, and although it can be folded down, it’s still a bit bulky to carry by hand.

Featuring a 250W motor, the Reid eScooter is capable of speeds up to 25km/h, or 15.5mph to those of us in the UK. That may not sound like a lot but it’ll get you from A to B pretty quickly, and it’ll likely be road legal when the UK Government gives eScooters the thumbs up, with a rumoured cap of 15.5mph.

There are three driving modes, switched via a press of the centrally-located power button. You’ll find a pedestrian mode for weaving through busy pavements capped at 4.3mph, a standard mode that’ll gradually take you to a max of 9.3mph, and a speed mode that’ll take you up to the maximum speed of 15.5mph pretty quickly. The latter is unsurprisingly the fastest, most responsive mode, and while it’s not quite as nippy as the acceleration of the Ninebot Max G30’s upgraded 350W motor, it’s still responsive enough for the stop-start of city commuting.

The only issue is that the button is hard to reach while keeping both hands on the handlebars, making it difficult to switch modes on-the-fly while riding.

Just as important as speed is stopping power, and the Reid E4 has that covered. You’ll find a mechanical disc brake in the front wheel, and the brake lever integrated into the handlebar alongside a charming little bell offers automatic motor cut off. In layman’s terms, the scooter stops very quickly when you hit the brakes – surprisingly quickly, in fact.

Reid claims you’ll get around 28km of range from the E4 with a single charge, which equates to 17.4 miles for those of us in the UK. Unfortunately due to the lockdown measures currently in place in the UK, it’s impossible for me to put that claim to the test, but it’s worth noting that as with any electric scooter, the range depends on a number of variables like weight, speed, acceleration and more.

But while the eScooter is a lot of fun to ride around, there is one complaint: it’s bumpy, thanks to the solid 8.5in tyres. While there are various benefits to the solid tyre design, including being puncture-proof and being able to last much longer than standard tyres, but it also means there’s no ‘give’ when riding over bumps and uneven terrain. You’ll likely feel every bump and dip in the road, and it’ll even vibrate a bit on rough tarmac surfaces.

With an RRP of £499.99 in the UK, the Reid E4 isn’t among the cheapest on the market – you can buy the likes of the Xiaomi Mi M365 for £399 and you can find generic electric scooters even cheaper – but it does offer a largely more premium experience compared to the competition. The build quality is high, there are a number of unique features including a suite of customisable LED lights and a well-built app, and crucially, it’s a joy to ride, if not slightly bumpy.

So yes, while you can get cheaper electric scooters, you probably won’t find the same quality on offer. It’s available from online retailers including Cyclehouse for £499.99, although you can pick it up much cheaper – £429.99 – at Pure Electric at the time of writing.

For other options, I recommend taking a look at Tech Advisor’s selection of the best electric scooters.

The Reid E4 electric scooter is a great bit of kit overall, offering a slightly more premium experience than what you’ll get from the likes of Xiaomi, although you are paying a little extra for the pleasure.

The E4 doesn’t look like the majority of scooters you’re likely to see on the road, sporting a distinct shape – especially around the handlebars – along with a large display, tilted handlebars and more customisable LEDs than you can shake a stick at. If you’re looking to stand out, the E4 allows you to do that.

The 250W motor provides decent torque, especially in the dedicated sport mode with quick acceleration and max speeds of 15.5mph. The only real complaint is the fact that it uses solid tyres; while it means you won’t get any punctures when riding, it also means you’ll feel every lump and bump in the road.

Overall, though, I’d say the Reid E4 is well worth investing in if you’re looking for something a little more premium than the swathe of generic electric scooters I’ve seen appear in the UK recently.