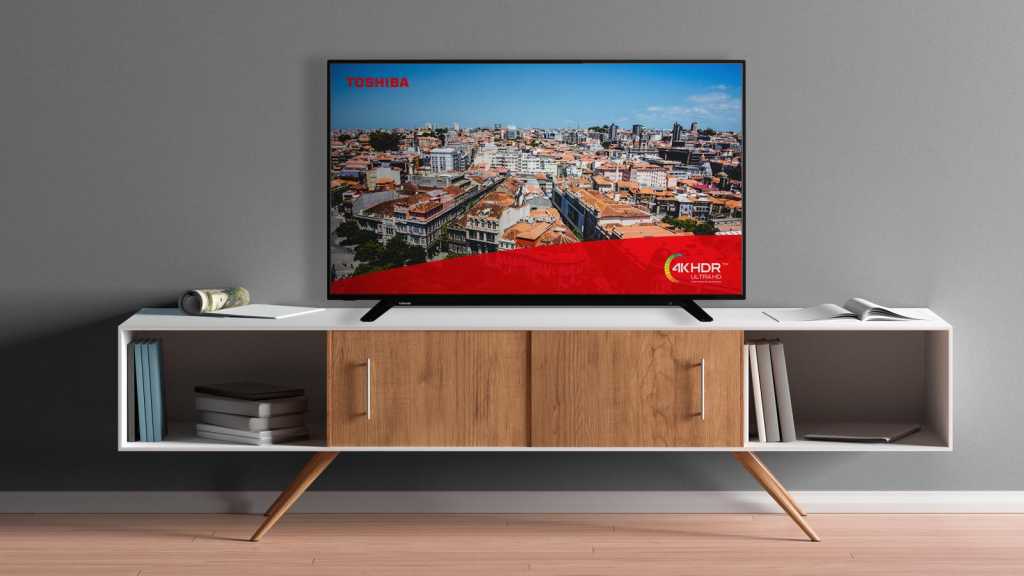 The Toshiba U29 should be considered remarkable value. Any 4K HDR at these prices will turn heads, but the fact that this one performs well warrants a thumbs up. While not a top flight picture performer, we reckon it’s ideal for second room duties or if you simply can’t afford anything more expensive.

They say you get what you pay for and that’s often true, but Toshiba is aiming to rip up the rule book with the extremely affordable U29. This budget 4K HDR TV has a lot going for it.

Closing in on 60 inches, and offering 4K HDR with Dolby Vision, our £350 58U2963 (58in) model seems almost too good to be true. With buyers seemingly ravenous for low cost second screens, this entry level Ultra HD model has to be worthy of closer inspection.

Adopting a cookie-cutter backlit design, the U29 is relatively deep at 74mm. Build quality is fine for the price, if somewhat plasticky.

One aspect that irritates is the very obvious oversized power button, which glares like a green traffic light when on, switching to angry red in repose.

Connections include three HDMI inputs plus PC input and a digital audio optical output. The second HDMI supports ARC for soundbar use. There are also two USB 2.0 ports, while Wi-Fi and Bluetooth are yin to the set’s Ethernet yang.

The U29 ships with a full-size IR remote control, with dedicated buttons for Prime Video, Netflix and Freeview Play.

The set also Works with Alexa, but you’ll need an Alexa device on your network if you want to use voice control to change channels or adjust volume.

Capable of appropriate clarity and impactful colour, the U29 will please casual viewers. There’s not a lot of image tweaking required, beyond switching off Energy Saving mode, which is on by default, and ensuring Dynamic Contrast is set to Medium.

Picture presets come in Natural, Cinema, Game, Sports and Dynamic flavours. I found the Cinema preset consistently gave the best contrast and image depth, for all content, not just movies.

Having Dolby Vision on board is a definite plus when it comes to HDR. While generally considered a high-end feature it’s a boon on screens with lower brightness, where it helps tone map bright highlights without clipping (detail loss).

The set is also compatible with regular HDR10 and broadcast HLG, but there’s no support for HDR10+, the rival to Dolby Vision supported by Amazon.

On the bench, I measured HDR peak brightness at 300 nits. That’s nothing special, but is to be expected from a sub-£400 LED HDR panel.

With regular HDR, the TV delivers a pleasingly bright average picture level. 4K Netflix streams look fine, but the U29 looks its best with UHD Blu-ray.

The catch is the TV can’t deliver a deep black, and contrast flattens when viewed from the side.

As a gaming display, the Toshiba U29 proves reasonably forgiving. I measured image lag in Game mode at 25.7ms (1080/60); 30ms is our cut off point for acceptable gaming performance.

Audio quality is better than you might expect, at least when it comes to volume and presence. The TV’s cabinet size allows for larger than average drivers, here supplied by Onkyo. The TV has no trouble making itself heard if you can’t afford a soundbar.

Check our chart of the  best TVs to see rivals.

If you’re after a screen to amuse the kids (or yourself), then this Tosh deserves investigation.

It’s as cheap as chips, offers a consistent picture with both HD and 4K sources, and has all the apps required to satisfy hungry streamers. It won’t even put you at serious disadvantage playing games, either.

The caveat is HDR performance and black level, both of which are limited. On the plus side, Dolby Vision at least ensures encoded HDR content doesn’t look worse than SDR (which is actually quite common at this price point).

I also found the Toshiba branded smart platform easy enough to live with. It can even interact with Alexa should you want it too.

“Alexa, what’s the definition of bargain?”