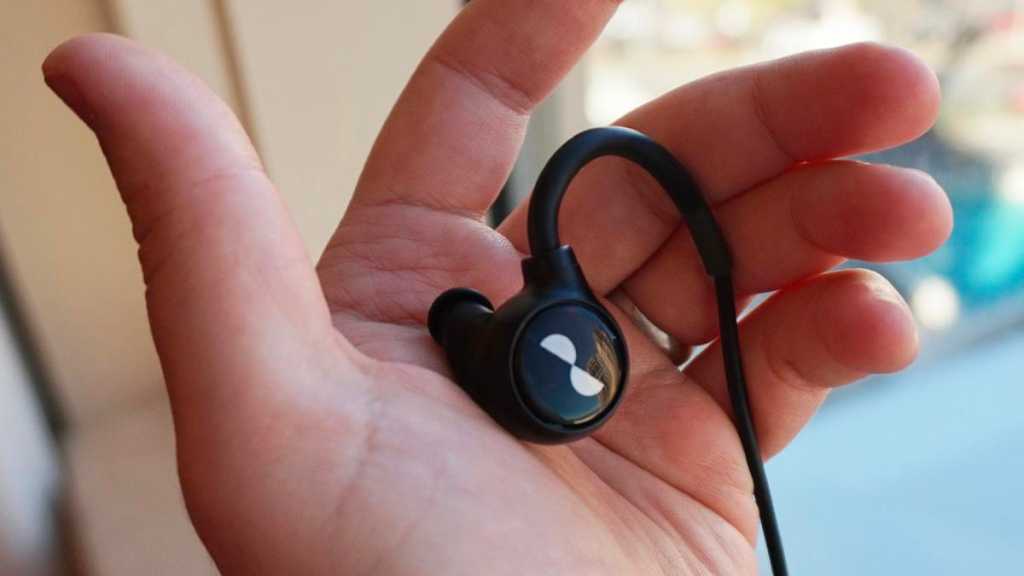 NuraLoop manages to condense the audio wizardry found in the company’s first product and deliver an in-ear alternative that’s hard to beat in terms of comfort, quality sound, top-notch noise cancellation and battery longevity. Better yet, it undercuts the likes of Apple’s AirPods Pro while delivering a superior audio experience.

Originally unveiled at CES 2019, on pre-order from May that same year, scheduled to launch in September, delayed until December, delayed again until 2020, showcased again at CES 2020; it’s fair to say that the road to launch has been pretty bumpy as far as Nura’s newest product is concerned, but the time has finally come, NuraLoop is here at last.

The Australian startup made its debut in 2015 and launched its first set of headphones – Nuraphone – a couple of years later. Primarily down to the incredible engineering, not to mention the resultant sound in the company’s debut product, Nura has become one to watch.

NuraLoop, in essence, aims to deliver that same signature technology and personalised sound in a far more compact package without compromises – no mean feat.

While it would be disingenuous to describe Nuraloop as ‘bulky’ these are technically neckbuds, which stand out in a market now flooded with true wireless alternatives. That said, NuraLoop’s form really boils down to a single wire connecting each earbud, no shoulder-mounted battery pack to speak of here, thankfully.

In fact, despite the driver housing serving as the most prominent and sizeable part of their design (each measuring just under an inch across), when you put them on, they feel impressively unobtrusive.

Each bud is supported by a semi-rigid ear loop that rises up and over the back of your ear, taking most of the weight and helping ensure a secure fit, even when running. The cord connecting each bud is long enough to comfortably wrap around the back of even my sizeable noggin, while also ensuring there isn’t an excess of cable to distract and swing around every time you turn your head.

The matte-black design is tasteful and unassuming, although this is somewhat offset by the glossy plastic outer face of each bud, both prominently showing a silver Nura logo – these also double as touch surfaces that recognise a mix of swipes and taps – more on that later.

The biggest design difference between Nuraphone and NuraLoop is the move away from the original’s Inova earcup design. By ditching the cups Nura has had to pack more into the in-ear bud design used by NuraLoop. Looking closely at each bud, you can actually see both the microphone and audio channels – the former necessary for the company’s ingenious technology to properly do its thing.

NuraLoop comes with four bud sizes – small, medium, large and extra-large – with the medium eartips fitted out the box. I usually opt for smaller eartips when offered, but NuraLoop’s included tips suited my ears perfectly. They do appear to use a proprietary design, so replacements are likely best purchased from Nura directly.

You’ll also find a pack of eartip meshes in-box. These are likely replacements should your existing meshes become too blocked-up or damaged but here’s hoping they won’t need placing anytime soon, as the included extras are incredibly small and tricky to work with, without a set of tweezers at least.

Along with the NuraLoop itself, you also get a 3.5mm jack adapter, a USB-A charging lead and a soft neoprene zip travel case. If you want to carry the majority of the NuraLoop and its adapters with you, the travel case can be a tight fit in itself and is also best kept in a back pocket, coat pocket or bag as it’ll undoubtedly bulge if you try and slot it into a standard hip pocket.

As for those adapters, Nura has once again opted for a proprietary design (similarly to Nuraphone) that this time uses a set of terminal points mounted at the centre of NuraLoop’s connecting cable that magnetically attach to either the 3.5mm adapter or charging lead.

Part of me wishes that Nura had altered the terminal to accommodate a more conventional USB-C connection this time around, as sourcing replacements should these custom adapters break or go missing will unquestionably be a more costly affair.

Despite the NuraLoop’s sweat resistance, I also worry about the long-term effects that sweat may have on the terminal points built into the connecting cord, as they naturally sit against the skin on the back of your neck when worn.

If you’ve used Nuraphone, you’ll be familiar with the setup of NuraLoop. It’s a pretty painless sub-two-minute process that’s worth every second, considering the end result.

Pop NuraLoop on and in-ear detection will kick in, in fact, NuraLoop uses this to automatically switch on and off as and when they’re worn, which is wonderfully convenient. Once in, you’ll be prompted to download the Nura app from your app store of choice and pair NuraLoop with your phone via Bluetooth, as you would any other Bluetooth headphones.

When they’ve connected and the app is installed, you’re then guided through the attenuation process, which amounts to little more than a couple of taps within the app and the need to sit in a quiet space for a moment.

As with Nuraphone, NuraLoop plays a range of calibration sounds and by leveraging the effects of otoacoustic emission from within your ears, builds a custom sound profile specific to your range of hearing. During setup, you’re played a demo track that you can toggle between a neutral profile and your personalised EQ settings – the difference is always stark and astounding, especially when you hear it for the first time.

We first experienced NuraLoop at CES 2020 and having lived with a myriad of other headphones/earphones since our first brush with Nuraphone, to hear that same magic rekindled in this smaller, more versatile form results in the same undeniable smile creeping across our faces (it also won one of our ‘ Best of CES 2020‘ awards as a result).

Testing between the neutral profile and your own is like night and day. NuraLoop leverages some pretty competent drivers, based on the resultant sound, which has no qualms being pushed. You can enjoy pounding bass, clear mids and crisp highs, with a maturity and versatility from the produced sound that most in-ear Bluetooth headphones simply lack.

To truly dissect NuraLoop’s output though, you need to take into account three additional elements: volume, Immersion and Social Mode. There’s unquestionable power and poise in NuraLoop and even at maximum volume, sound quality seems unimpeded (not that you should ever need to push that high).

‘Immersion’ is a dedicated EQ control that pushes both bass and mid-tones to more closely emulate the feeling of a live performance and it’s wonderfully effective. It has value with bass-heavy trap music and the like, but we found it worked incredibly well in bringing more nuanced vocal performances to life too.

Listening to Youn Sun Nah’s Momento Magico, for example, brought out every syllable and plosive from her lips, along with the hearty strumming from the double bass and the delicate picking of the Spanish guitar.

What’s more, Immersion gives the sound space to move and breath – you’re enveloped by it, making for a wonderful listening experience as a result. While we’d be happy if Immersion were simply on or off, the ability to rack it up or down as needed is a nice bonus.

Lastly is Social Mode – in truth, NuraLoop’s name for active noise cancellation (ANC). While you can toggle the feature off by diving into the Nura app’s settings, the option isn’t immediately accessible and that’s a good thing. Like Immersion, Social Mode isn’t solely ‘on’ or ‘off’, it can be ramped up or down as needed and is never truly disabled.

When in full effect, it offers passthrough sound; meaning you can hear the world around you with almost superhuman-like clarity. It essentially amplifies external sounds ever-so-slightly while also quietening and flattening out your music somewhat.

Move the dial all the way to the other end of the scale and NuraLoop boasts some of the best ANC from any in-ear buds that we’ve tested. Most sounds are reduced to a high-pitched whisper and if you start playing music (or any audio for that matter) on top, you’ll be hard-pressed to discern even the loudest or highest-pitched sounds around you.

The Nura app has received an update or two in time for the arrival of NuraLoop. It offers a clean, almost completely monochromatic interface with a few controls lining the top and bottom of the screen, along with your custom sound profile front and centre.

You can easily switch or add a new profile (the app stores up to three), share your unique sound profile to social media at the touch of a button and keep tabs on your NuraLoop’s battery. You can also toggle your profile on and off (switching to the Neutral profile sounds like someone suddenly ran the audio mix through a meat grinder, by comparison), alter Social Mode and adjust Immersion.

By diving further into the app’s settings, you can also change which actions NuraLoop takes in response to the various touch gestures it supports. I settled upon a tap of the left ear to toggle Social Mode either fully on or off, while swiping in a circular motion adjusted Immersion. The right ear, meanwhile, paused or played music with a tap and supported volume control with a swipe.

The only real omission was the ability to summon my device’s smart assistant, although asking on the phone directly still resulted in its responses being piped through NuraLoop.

No native assistant support means you can’t place calls directly from NuraLoop, however, when making or taking calls (you can tap to answer and hang up). With inbuilt features like ANC, call quality was excellent and versus most other wireless earphones I’ve tried talking through, microphone quality was also some of the best in its class – rivalling perhaps even Apple’s AirPods Pro in this regard.

Considering ANC is never truly off (unless you hunt for that settings option) battery life is exceptional. Nura quotes up to 16 hours and while mileage will vary depending on the various volume, Immersion and ANC levels you have set, you’ll likely be more than happy with NuraLoop’s exceptional longevity.

Our sample typically lasted through two days of extensive use whilst working and with fast-charging built-in NuraLoop offers up to two hours of playback from just ten minutes of charge time. The only minor shortcomings relating to the battery are the fact that the app only displays battery percentage in 10% increments and that you can’t use NuraLoop with the 3.5mm headphone jack and charge it at the same time.

At £199/US$199/€229/AU$299, Nura is making an aggressive play with its second mainline hardware product, not least because it’s that much more affordable than Nuraphone was (£349). NuraLoop falls neatly between the likes of the latest PowerBeats and Apple’s AirPods Pro, and that is an interesting space to be in, considering what’s on the table.

While Nura is still fulfilling pre-orders, you can now buy NuraLoop directly from the company’s website, with free-shipping included around launch time.

Those familiar with Nura’s technology will have an easier time getting past the neckbuds form factor and the proprietary connectors but anyone serious about quality sound should consider NuraLoop.

True wireless buds might offer marginally greater convenience but you won’t be able to find a blend of comfort, quality sound, top-notch ANC and impressive battery longevity as good as NuraLoop’s, especially at this price.