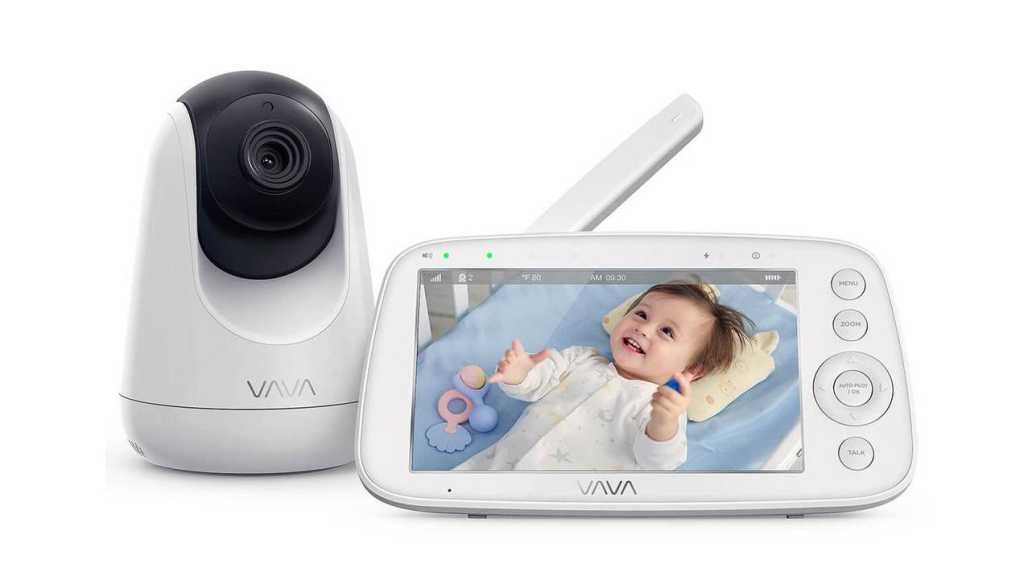 We’re really impressed by the VAVA Baby Monitor. For a relatively unknown brand, this offering is high quality, well priced and includes most of the features you’ll be looking for. For some, the lack of WiFi and phone connectivity will be off-putting, but the 5in screen and panning capabilities may make up for it.

A baby monitor is one of the more expensive purchases you’ll need to make when introducing a new human to the world, so it’s important to spend some time deciding which baby monitor is the right fit for your needs. We’ve been testing the VAVA Baby Monitor to determine how it compares with rivals like the Eufy SpaceView and BT’s Smart Baby Monitor, and whether it’s a worthwhile investment.

For more buying advice and alternative options, check out our round-up of the best baby monitors.

The VAVA Baby Monitor is priced at £139.99/$159.99, making it less expensive than rivals such as BT’s Smart Baby Monitor and the Eufy SpaceView monitor, both of which share the same 5in screen size. It’s available to buy from Amazon, or from VAVA’s own website.

£139.99/$159.99 is a very fair price for the build quality and feature set you’ll get with this baby monitor, so assuming you’re not put off by VAVA’s largely unknown brand name, we think it’s a very worthy contender.

The design of the VAVA Baby Monitor is simple and sleek, albeit a little more clunky than Eufy’s SpaceView. The display module is heavy but durable, with a sturdy kickstand and well positioned buttons that you’ll find easily when you’re fumbling around for them in the middle of the night.

The white and black colour scheme will fit in with any nursery or bedroom, but the base of the camera module is quite large so you’ll need a big surface to sit it on, perhaps a chest of drawers or a wide window ledge. Eufy’s SpaceView camera module is smaller and more suitable if you don’t have much space available. However, like the SpaceView, the VAVA is capable of being mounted onto a wall, though in this case screws and wall plugs aren’t included.

Setup of the VAVA Baby Monitor is as simple as plugging the camera in and, assuming you’ve charged up the display module, turning them on.

The camera module needs to be plugged in to a power source at all times, and comes with a USB cable that should be plenty long enough for most rooms. Most of the baby monitors we’ve reviewed require the camera to be plugged in, but if you want something more portable you might want to investigate the Babymoov Yoo Travel. 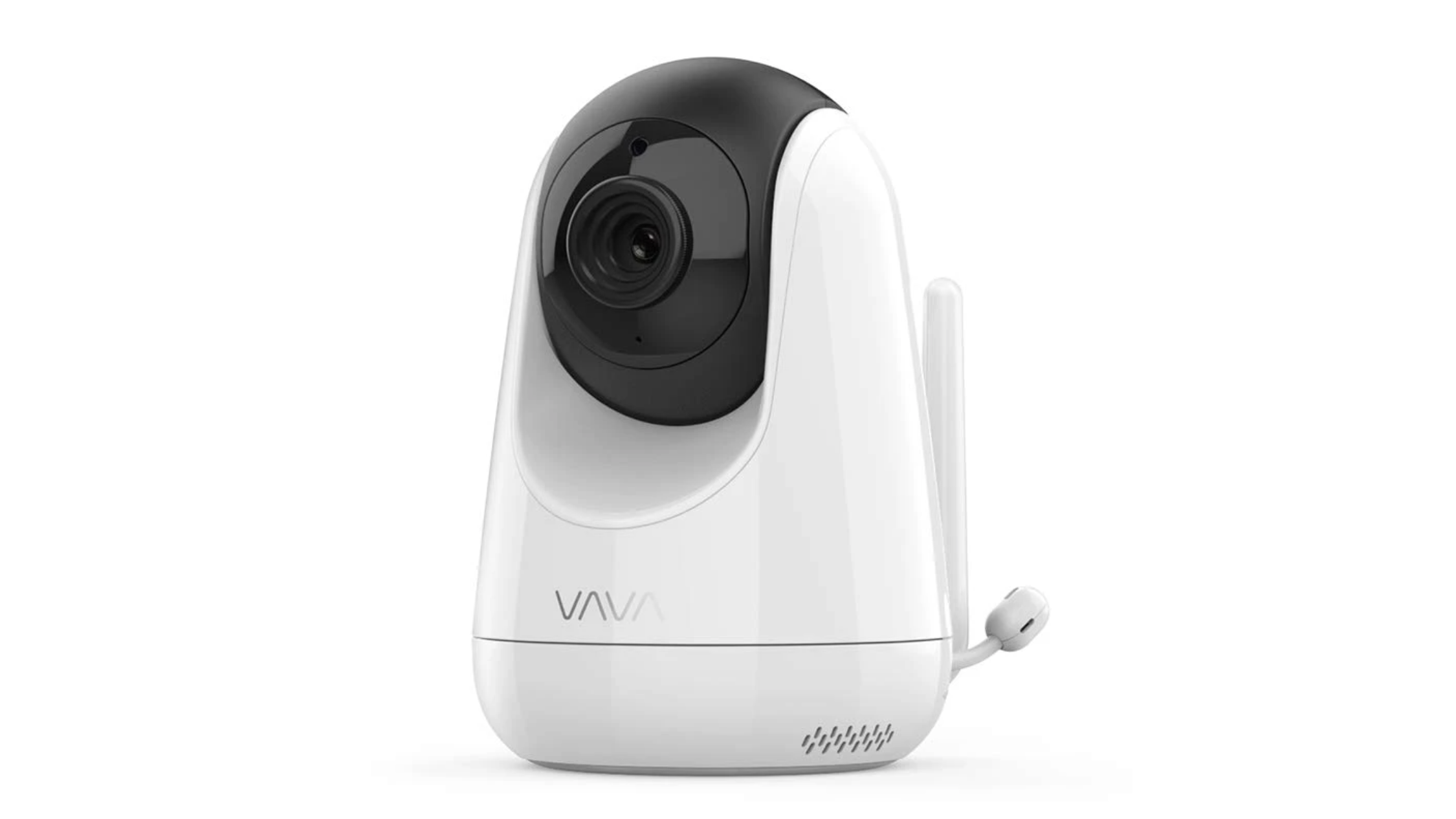 The display module has a built-in battery that charges using the USB-C cable provided. It can last for up to 10 hours with the display on, or 24 if you use power saving options to allow the display to switch off. We found this to be plenty long enough for all day time naps and the evening, with the display on the entire time. We would  then plug the monitor in at our bedside overnight.

The 5in screen is large enough and bright enough to be viewed at a distance (but you can turn the brightness down, ideal if you want to keep the display on in your bedroom overnight), and the volume can be adjusted enough to be able to hear even the tiniest of noises in your baby’s room should you wish.

Like the Eufy SpaceView, the VAVA Baby Monitor’s display has a 720p resolution, which means you’ll get a surprising amount of detail. We found the colour to be quite vivid, and more accurate than the SpaceView. There are four levels of zoom available, but the higher the level the more quality is lost.

We like the noise indicator lights that run along the top of the monitor, rather than on the screen itself. This means that even when you have the screen off and volume low (you can set the screen to go off after one minute, two minutes, five minutes or never), you’ll see if there is noise coming from your baby’s room. The lights are green and red, to indicate how loud the sounds are. This differs from the SpaceView’s sound detection alarm approach, but we prefer VAVA’s approach here.

One of the VAVA Baby Monitor’s key features is the ability to adjust the view of the camera remotely using the display module. You can use the arrow buttons to the right of the screen to pan left and right, up and down. It is capable of panning 110 degrees vertically, and 270 degrees horizontally, which means you can get the angle perfect without needing to enter the room and disturb your baby.

Night vision is excellent, with great contrast and very little graininess, and there’s no major issue with lag between the camera and the display. Noises and cries were picked up almost instantly. 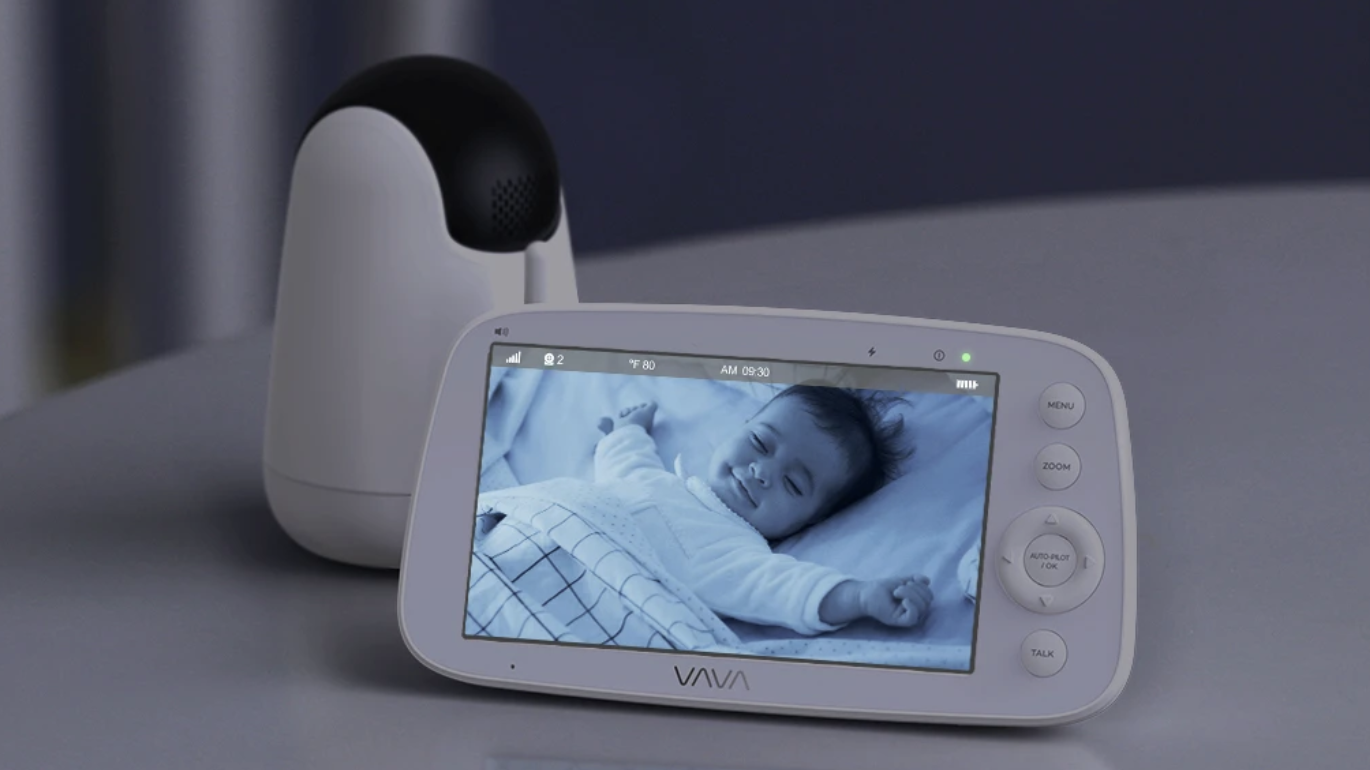 Along the top of the display you’ll find the temperature of your baby’s room thanks to the built-in thermostat, as well as signal strength (which we found to be strong even when we were in our garden), a battery life indicator and the time. We found that the time was difficult to read depending on what the camera was pointing at, which was frustrating during the night when we wanted to have a quick glance.

You’ll also see a camera indicator to tell you the number of the camera currently in view. You can connect up to three additional cameras to the monitor, bringing the total to four, which can be switched between manually or set to automatically cycle every 15 seconds.

Like most baby monitors, there’s a talk button that allows you to speak to your baby via the display, to let them know you’re on your way to them or to attempt to soothe them without needing to enter the room.

There’s also an auto-pilot mode that continuously pans around the room for you, but this seemed a bit odd to us. It’s a gimmick that doesn’t have any real world use that we could think of.

The VAVA Baby Monitor misses out on a nightlight and the ability to play lullabies or white noise, but both of these are extras that we’ve never found the need to use in practice, even when they’re available.

A benefit of the lack of WiFi is security: WiFi connectivity means the potential to be hacked.

The VAVA Baby Monitor is a direct competitor to the Eufy SpaceView, which up until now has been sitting firmly at number one in our baby monitor chart. It has the same screen size and similar panning capabilities. The only real differences are the design (we prefer the SpaceView’s smaller size) and the lack of the lullaby option, which we haven’t been missing.

We prefer the VAVA’s sound indicator lights, but aren’t as keen on the way the time is displayed on the screen. The VAVA misses out on the included wall mount and wide angle lens too.

It’s extremely tough to decide which of the two is best, though, so if we put it down to price we’d call the VAVA the winner here. It’s a great baby monitor that we wouldn’t hesitate to recommend.