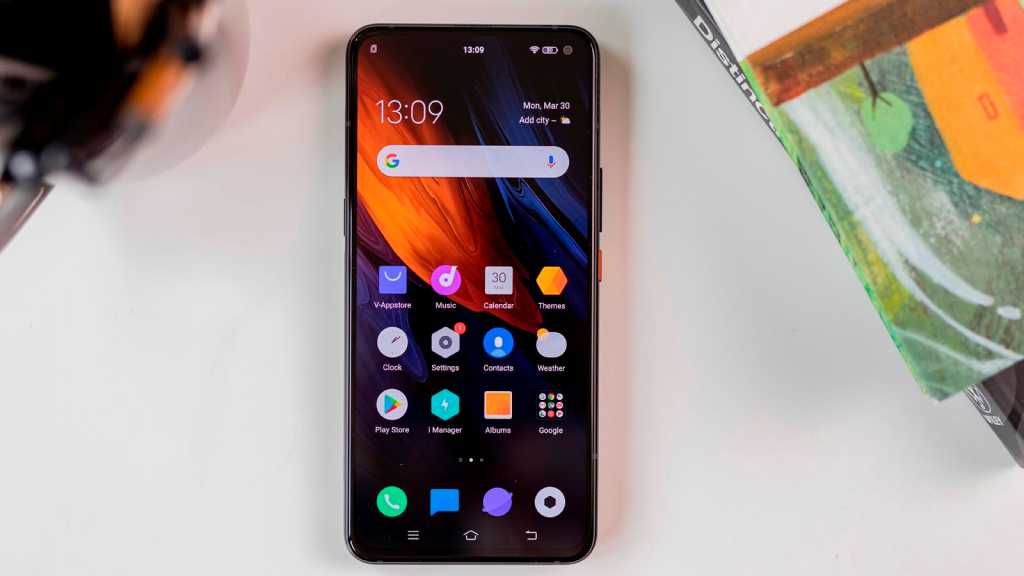 The Iqoo 3 offers impressive speed and performance along with an excellent battery life. With dedicated pressure sensitive gaming buttons, an Ultra Gaming Mode that lets you customize a seamless gaming experience and Snapdragon 865, it’s a worthy competitor against the Asus Rog 2 Phone, but at a lower price point.

Whether you pronounce it ‘eye-koo’ or ‘I-Q’ the Vivo Iqoo 3 5G is a beast of a phone, which isn’t a surprise given its tagline “Monster Inside” (in reference to its Snapdragon 865 chip). Iqoo, which stands for “I Quest On and On” is a slogan that rings true – the phone goes far given it’s small price tag.

To start, the Iqoo is a gorgeous phone. The Tornado Black option I looked has a lovely sheen across the back that dances in the light but remains understated. It is slippery without a case, but thankfully, one is provided.

But the Iqoo is a noticeably heavy phone, which isn’t surprising with so much glass. Gorilla Glass 6 protects the front and back, nested on an aluminum frame. Though the phone felt weighty at first, compared against the relatively lithe Huawei P20 I usually use, I did get used to the Iqoo 3 within a few days.

It’s also reassuring to feel it sitting in my back pocket, knowing it hasn’t fallen out.

The display looks slick. The Iqoo shows off a 6.44in Super AMOLED FHD+ (1080 x 2400 resolution) screen that supports HDR10+ – which means you get a big screen with bold colours. Images appear vibrant and clear, like something you would get on a much more expensive phone. Dark colours and blacks look rich with luscious contrast.

You can also thank the pinhole camera and minimal bezels for an immersive screen experience. The Iqoo offers a 84.3% screen-to-body ratio, so you get lots of glossy, beautiful display for all your high definition Netflix and Disney+ needs.

As for biometrics, the in-screen fingerprint scanner is reliable for the most part, though sometimes takes a couple of attempts. I mostly used the face unlock, which works even in low light conditions.

Of course as a gaming phone, the Iqoo 3 has specialized features too. The phone comes with dedicated pressure sensitive buttons along the right edge of the phone, called “Monster Touch Buttons”. These can be enabled and controlled through the Ultra Gaming Mode option in the settings menu.

I loved taking pictures on the Iqoo, especially on the wide-angle. Landscapes simply looked majestic, far outdoing anything I could take on my Huawei P20. The macro lens was similarly impressive, picking up incredible detail. It quickly became my favourite photography mode, especially for food. Yes, you will find a shameful amount of close-ups on the meals I’ve had on my Iqoo 3.

Where the Iqoo 3 flounders is on night mode. Images lose a hell of a lot of detail. It’s better than the standard image mode, but you don’t get the crisp and richness of a Pixel phone for instance.

Selfie-cam picture quality is fairly standard. It’s not breathtaking, but gets the job done. What I found jarring were the built-in “Beauty” options for skin-tone adjustments and face tuning.

Less egregious but a tad tacky were the features that help you strike the perfect selfie pose. Depending on which pose you want, the camera software automatically overlays a dotted silhouette over the display. Simply align your body within the line and voila.

When it comes to video, you can film in 720p, 1080p and even 4K (!) at up to 60fps. Its Slow Motion feature allows you to increase that frame rate to a whopping 120fps or 240fps in 1080p. I don’t know when this would ever be useful, but at least it’s an option available at your fingertips (quite literally) if the need does arise.

The model I tested offers 12GB RAM and 256GB storage with the top-of-the-line Snapdragon 865 processor. In our benchmarks, the Vivo Iqoo outperformed the Asus Rog Phone 2 in the overall multi-core CPU scores and some graphics tests, and massively outperformed the Razer Phone 2 across all but one test.

The Rog Phone 2, which is currently at the top of our best gaming phone chart costs considerably more at £829, while the Razer Phone 2, costs £779. The Iqoo 3 5G is available for £578 from eBay.

The Iqoo 3 boasts features like a 180Hz touch sensing rate which means it registers the user’s touch 180 time per second. This should allow for a fast, responsive game play, but the screen refresh rate is still a standard 60Hz, which is lower than other gaming phones on the market.

The Red Magic 5G for instance, is the world’s first phone to offer a 144Hz refresh rate, and costs a comparable £599.

Gamers will benefit from the Ultra Game Mode on the Iqoo 3. With the feature turned on you can optimize your gameplay experience by blocking calls during play, enabling 4D game vibration, adjusting the placement and sensitivity of air triggers (which you can customize by game) and much more.

If you want top performance a Monster Mode option boosts the CPU as well, while Speed Up option in the settings menu quickly clears up RAM in one touch.

The Iqoo 3 operates on Android 10 with its own iQOO UI 1.0 skin. It comes with pre-loaded apps, though quite a few, like Flipkart, cater specifically to the Indian market the phone was intended for.

Similarly, brace yourself to receive headlines from the pre-loaded regional news apps too (you can of course uninstall these apps).

One grievance I had when setting up the phone was a lack of support for Vivo EasyShare in the UK. I spent considerable time trying to figure out how to transfer my apps from my Huawei P20 to the Iqoo 3, only to find that the Vivo EasyShare app is geographically restricted and unavailable in the UK.

I had to manually re-install my apps. The performance of the phone, however, was strong enough to forgive this original annoyance.

You’re probably wondering why I haven’t addressed the 5G aspect of the phone. That’s because I couldn’t use it. While I used a 5G-enabeld SIM from Three, I didn’t get 5G connectivity. This will likely be the reality for most users until 5G infrastructure is available widely – but again, a minor grievance.

Battery life shines on the Iqoo 3. With 4400mAh under the hood, you can easily squeeze over a day without charging – unless you do a lot of gaming.

I used the phone mostly to browse through YouTube, listen to podcasts, chat with friends on WhatsApp and video call family on Skype and the Iqoo still held its own. What’s missing is wireless charging.

In terms of charging speed, with a super powerful 55W charger, the Iqoo 3 charged a whopping 54% in 15 minutes (with phone powered off).

The Vivo Iqoo 3 is available to purchase directly from Vivo for Indian customers in three colours: Tornado Black, Volcano Orange and Quantum Silver.

The phone is not available in the UK, but UK shoppers can ship it from China via Banggood from £571 or from eBay for £578.

US customers can pick up the phone from the Amazon marketplace for $717 though at that price you’re better off with the OnePlus 8, which takes the top spot in our round up of the best phones on the market.

The Iqoo 3 is impressive to say the least. It offers top-tier specs and optimized features just for gaming, but is attractive and performance-driven enough to appeal to non-gamers alike.

The Iqoo 3 is also affordable, which makes the phone all the more likeable. It’s unfortunate that the phone isn’t available in the UK directly, which might make competing options more attractive, but you still pay under £600 even if you have one shipped.