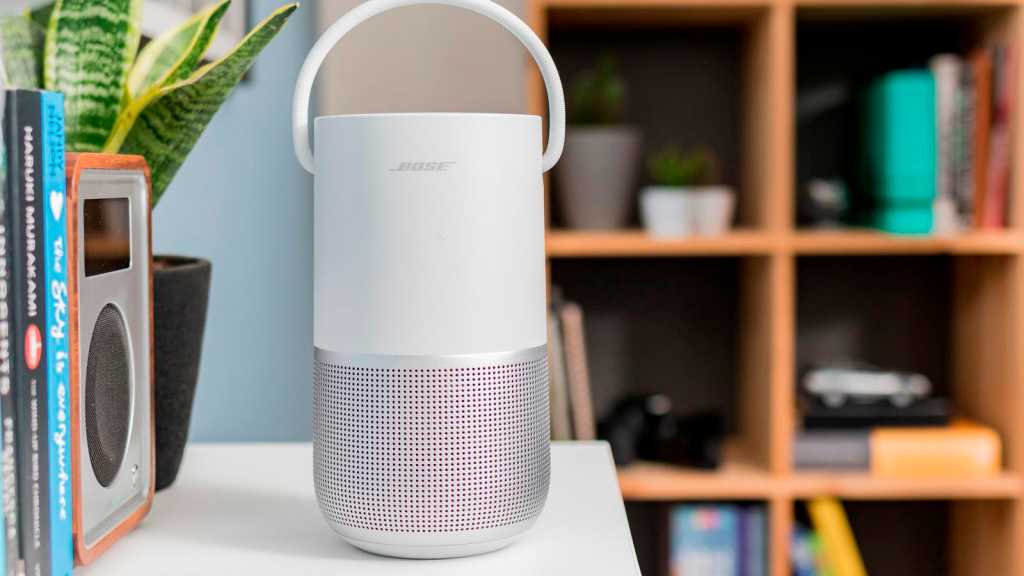 The Bose Portable Home Speaker is a welcome addition to the Bose smart speaker range, adding flexibility thanks to a 12-hour battery life and IPX4 waterproofing, without compromising on audio. Built-in support for Google Assistant and Amazon Alexa delivers the smarts, but be warned that this integration isn’t as fully featured as on official products or even other third-party rivals.

Not many people can afford a Bose speaker, and fewer still can afford several. That’s a problem for a company that wants to become your default audio portal. It’s in that context that the Bose Portable Home Speaker begins to make sense.

A single, high-end Bose speaker that you can move around the house, the Portable Home Speaker can be a supplement for an existing home audio setup, or it can simply be your whole home audio setup: a living room speaker during the day, a bedroom speaker in the evening, and even a garden speaker on those rare decent days in the British summer.

There’s even built-in support for smart assistants, so you can ask Google Assistant or Alexa to settle arguments about trivia even from the garden – at least as long as your Wi-Fi stretches that far.

Design and build – Best of both worlds

If you’ve seen any of Bose’s speaker range from the last few years, the Portable Home Speaker should feel pretty familiar. Available in silver/white or black, it shares the minimalist aesthetic of the rest of the range.

The speaker is a simple cylinder, with a solid matt finish for the top half, and the speaker grille built into the slightly rounded lower half. Near the top there’s a rigid braided fabric handle that can fold down against the back of the body when you set the speaker down, or lift up when you need to carry it around, and at the bottom is a grippy ring that keeps the speaker steady wherever you place it. 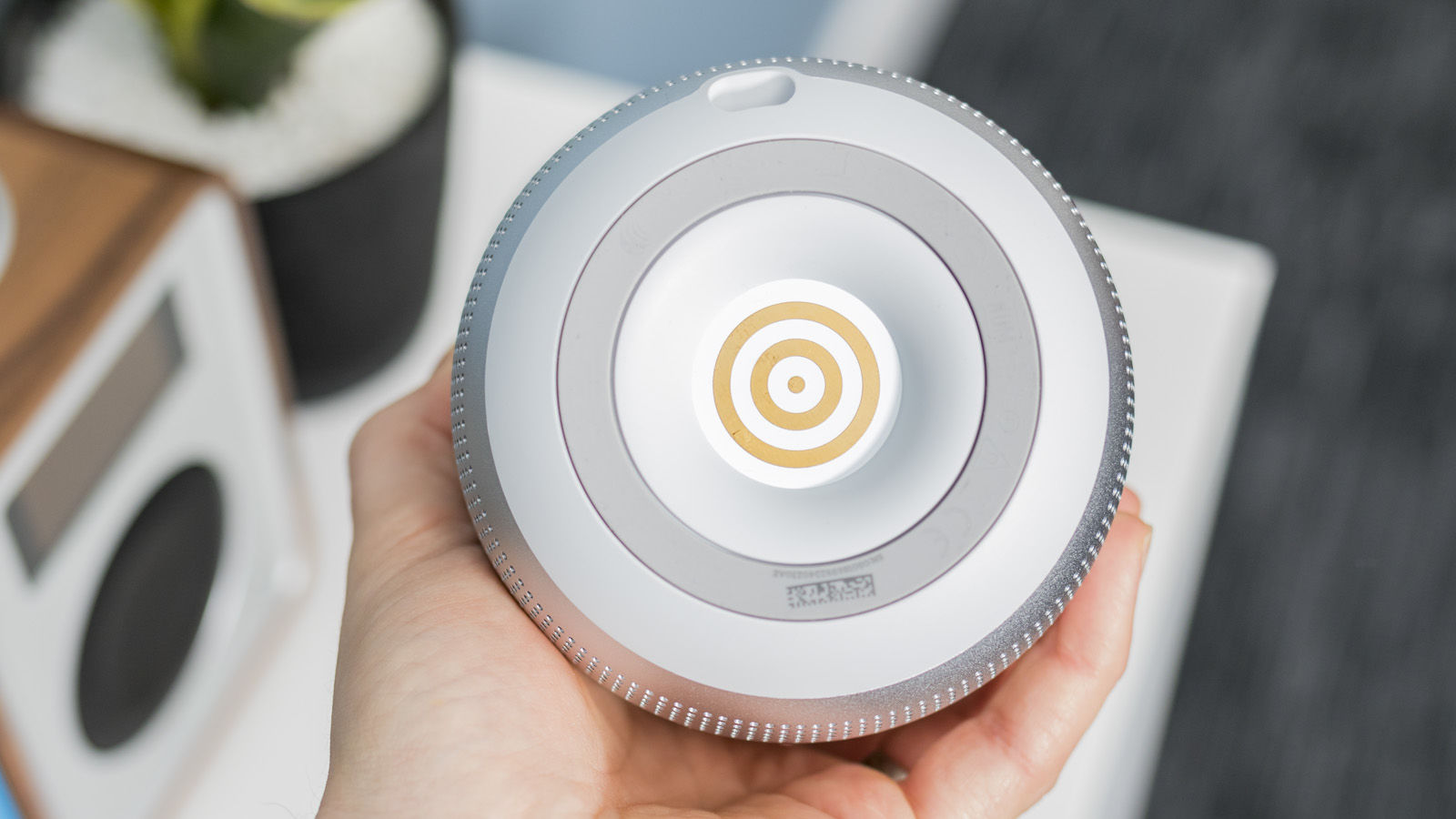 At 1.06kg it’s light enough that it’s comfortable to carry around short distances, but this is definitely a home speaker – it’s too bulky to really want to pack with you when you’re travelling unless you take a serious suitcase with you.

There’s a USB-C port tucked subtly into the back for charging, or you can also buy the official charging base. Sold separately for £24.95/$29, this is ideal if you’re going to mostly leave the speaker in one spot but then carry it around elsewhere from there, so it’s easy to drop it back on the charger each time without fussing about with the cable. It’s a custom charging base though, for reference, so you can’t use other wireless chargers with it.

As for battery, you’ll get up to twelve hours of portable use according to Bose, and that’s in line with what I’ve seen in my testing. Essentially that means it’s more than enough for a party or an afternoon in the garden, but you won’t want to leave it away from its charger for too long.

On the top of the speaker you’ll find the controls – which I’m pleased to note are actual buttons, bucking the unwelcome trend for fiddly touch controls where they have no business being. Everything is up here together, which keeps things simple if a little cluttered, with power, Bluetooth, play/pause, volume controls, a mic-off switch, and a voice assistant trigger, with a light ring that illuminates when it activates. 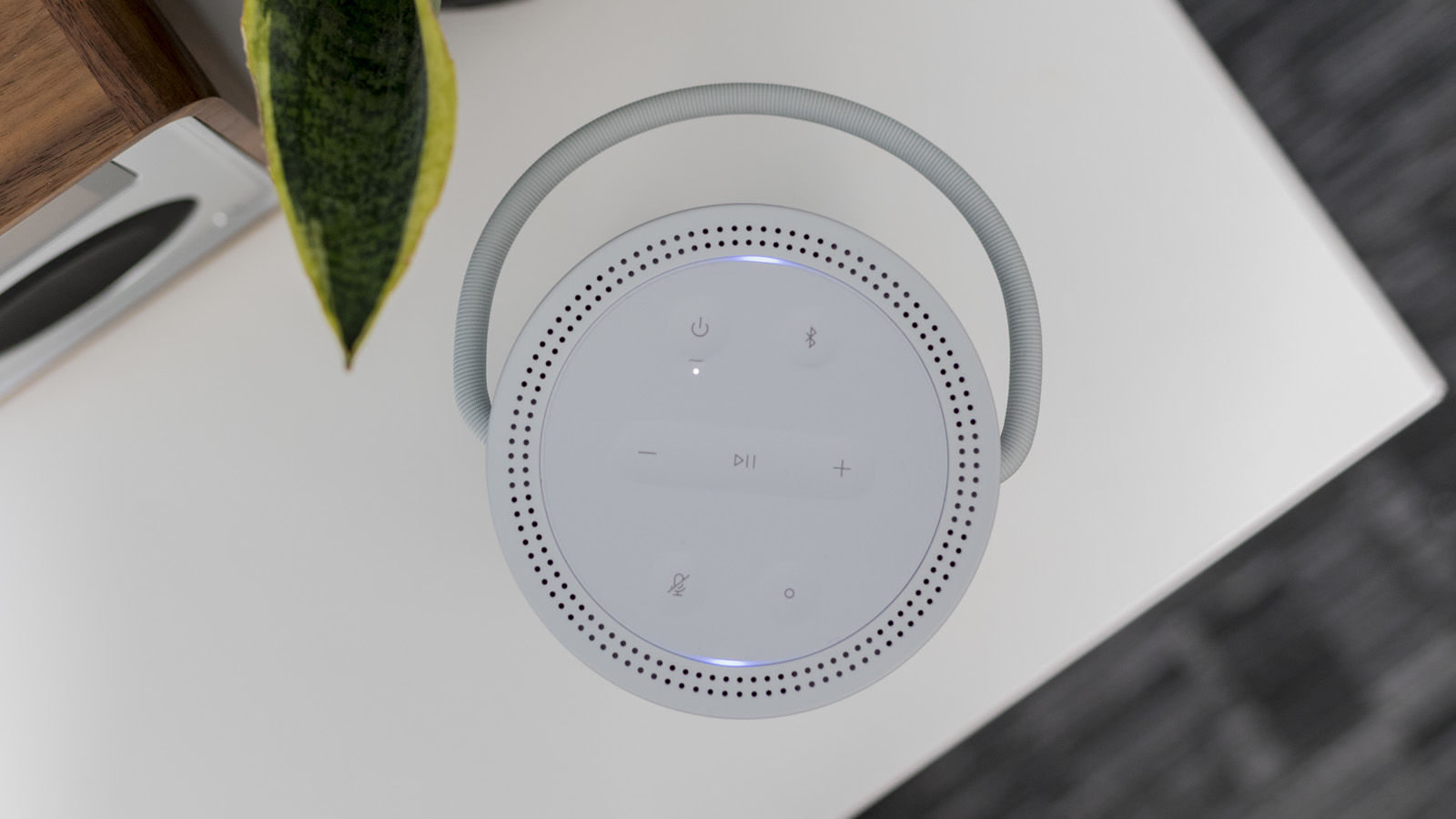 Lastly, since you might want to use the speaker outdoors, some good news: it has an IPX4 waterproof rating. That means it’ll survive splashing water, so it’ll be safe through rain or some mild spills, but I’d be a bit nervous about dropping it in the bath.

Sound is unsurprisingly a strong suit here. The 360-degree design means the speaker sounds great from any direction, so there’s no need to be fussy about how or where you set it down.

Bose is especially bullish about the bass response, with three passive radiators packed in to deliver really solid low-end response. This is probably the bassiest speaker I’ve heard at this sort of size, though fortunately for the most part the bass doesn’t overpower the sound profile, though this definitely skews in that direction.

In terms of either volume or overall sound quality this won’t quite match Bose’s bigger stationary smart speakers, but for a portable effort that has to cram in a battery and waterproofing tech too, it’s pretty impressive stuff. 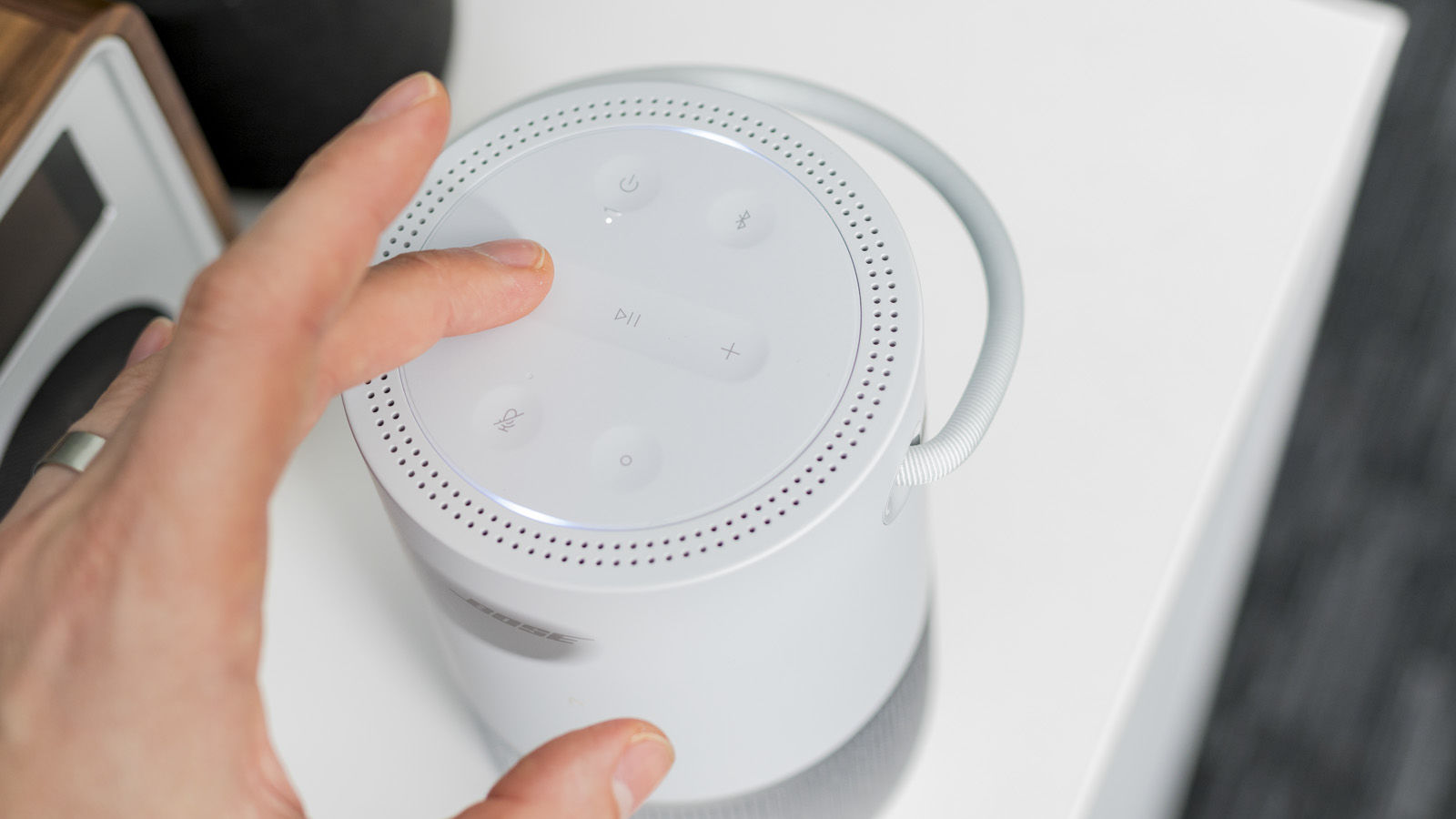 There’s built-in Wi-Fi, and it’s compatible with both Spotify Connect and Apple AirPlay 2, so you have plenty of options for playing music inside the house. Take it outside beyond Wi-Fi range and there’s still Bluetooth of course, so you’ll always have some way of getting your audio onto it.

The Bose app gives you some extra controls through your phone and tablet, including audio presets, built-in support for apps like Spotify or Deezer, and internet radio through TuneIn. It will also let you connect it to other Bose speakers for multi-room audio, though note that at the time of writing there’s no support for pairing two Portable Home Speakers together as a stereo pair.

This is part of Bose’s smart speaker range, so naturally smart support is included. Here it comes in the form of built-in support for both the Google Assistant and Amazon Alexa. Both need Wi-Fi to work naturally, but as long as it’s connected you can use this as an additional smart speaker within either network.

There are caveats though, and this doesn’t boast the full features you might expect from an official Google or Amazon product. Oddities include the fact that it doesn’t support Google Play or YouTube Music, so if you use either Google music service you can’t tell the Google Assistant to play music from them.

Even in supported services like Spotify there are oddities like no ability to shuffle your music through the Assistant. Basics like asking about the weather or your schedule, or controlling other Google Home devices, are all here, but it’s frustrating that it’s the musical aspect of all things where Bose’s firmware support falls short. 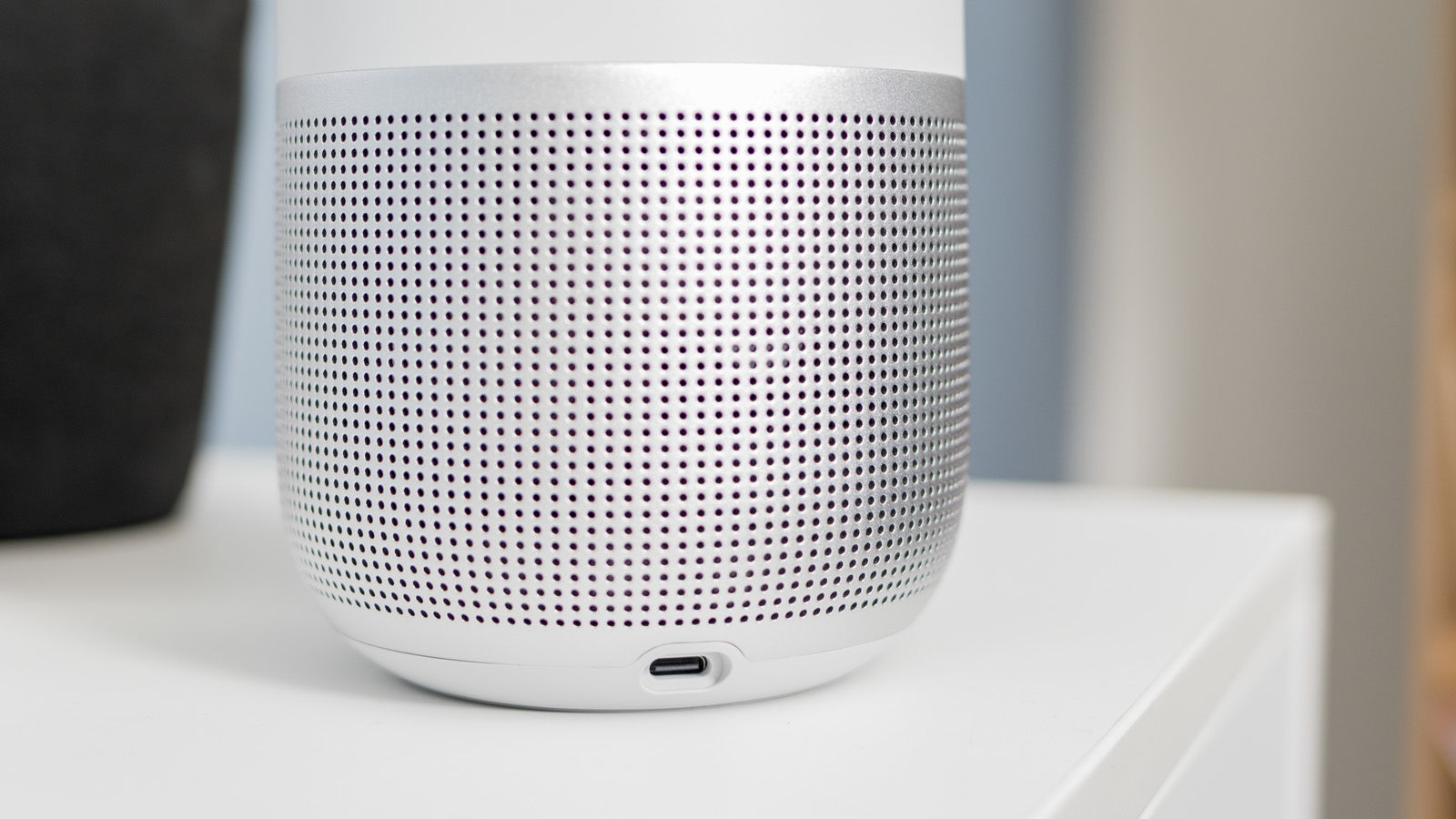 Price and value – Not bad for Bose

Anyone already in the Bose smart speaker ecosystem will no doubt welcome an extra speaker for multi-room audio, and the option to bring it out into the garden or away on trips makes it a compelling alternative to the Home Speaker 300.

The closest rival is the £399/$399 Sonos Move, which offers a pretty similar combo of powerful and portable audio. The Sonos smarts are better, and it offers better audio, better waterproofing, and includes a charging dock by default – the only downside is that it’s three times the weight, so is really only portable around the house, and not for travelling.

Really though, for many it comes down to ecosystem – grab the Sonos if you have other Sonos speakers, and the Bose if you have other Bose speakers. If you don’t have either then the Sonos is probably worth spending a little more for, unless you really want the option of taking it when you travel.

Check out the rest of our guide to the best Bluetooth speakers for other options we’ve tested.

The Bose Portable Home Speaker is a welcome addition to the Bose smart speaker range, adding some much-needed flexibility to the company’s current ecosystem.

Sound is strong, and both battery life and design impress. I just wish the smart support was a little less patchy, and for the price would have loved to see the charging cradle bundled in.