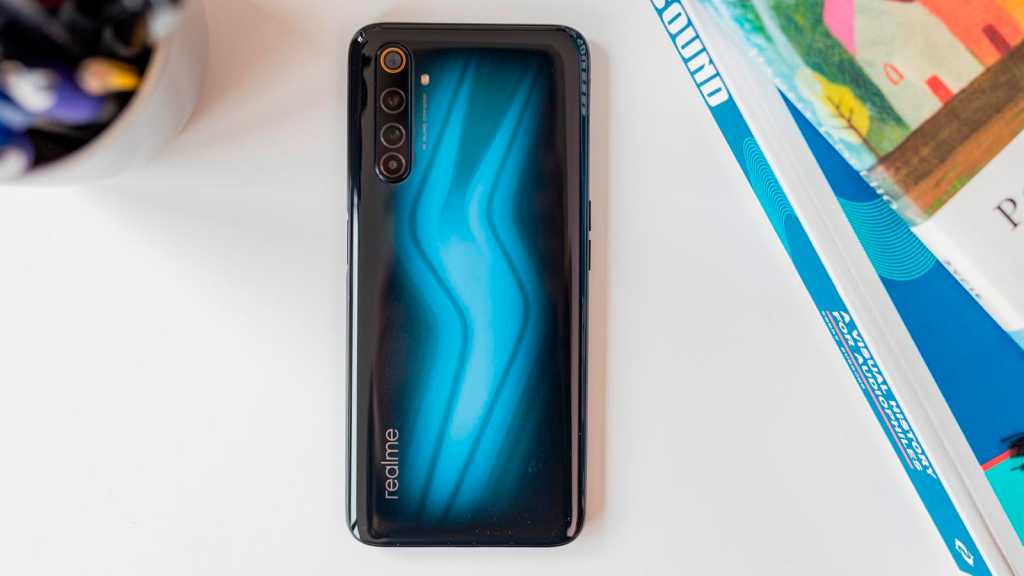 The Realme 6 Pro offers flagship-level specs like a 90Hz display and a smattering of cameras across the front and rear on a budget, but with an £80 difference between it and the standard model, Realme’s biggest competition is itself.

Realme, while relatively unknown in the UK, is making waves on the smartphone scene, offering flagship-level features at a fraction of the cost. The Realme 6 Pro is a perfect example of this: even with a sub-£300 price, the 6 Pro features a 90Hz display, 30W fast charging and six cameras split across the front and rear of the device. It’s also a looker, with a unique light-refracting rear that can put flagship devices to shame.

I’ve been using the Realme 6 Pro ahead of the UK release, and here’s what I think of what could be Realme’s star product.

The Realme 6 Pro is a good-looking smartphone for the price, especially when compared to the likes of the rather bland Moto G8 Power. The front is largely unexciting, sporting a mostly-full screen display with a dual-holepunch in the top-left, but there is one oddity: the display seems raised. 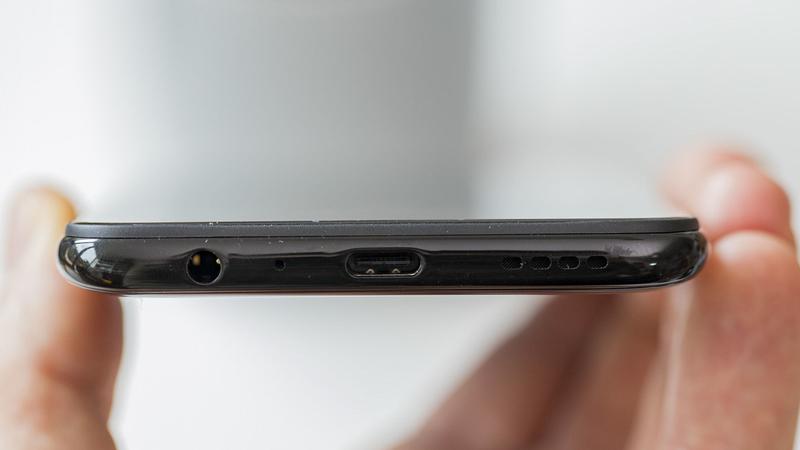 It’s not curved like other displays, instead, the display of the 6 Pro seems to protrude from the body, leaving a similar effect to what you’d experience with a thick tempered glass screen protector on a smartphone. It’s not something you’d likely notice just by glancing at the phone, but it’s immediately apparent when swiping in from the edge of the display – it’s hard to ignore that ridge.

It’s when you flip the Realme 6 Pro over that you’re truly wowed. Sporting a unique glass finish that refracts the light to look like a lightning bolt, the rear of the 6 Pro is something to behold – especially when flagships like the Samsung Galaxy S20 look uninspired in comparison. It’s a truly hypnotic finish that I’d love to see on more smartphones in 2020. 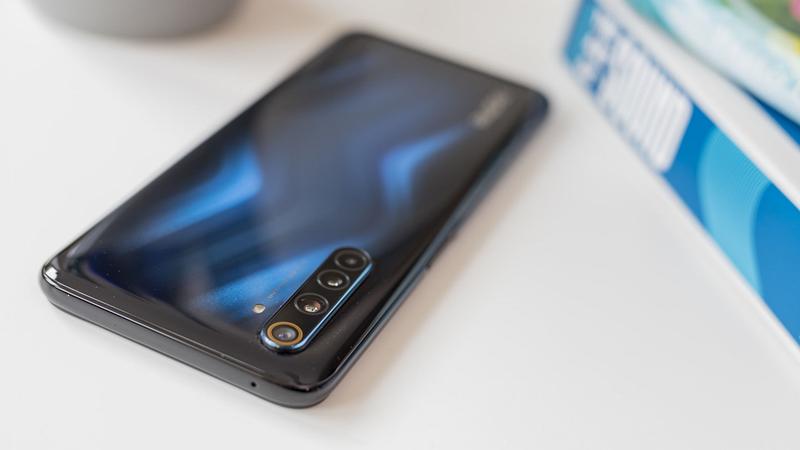 That finish is available in two flavours, Lightning Blue and Lightning Orange, and is protected by Gorilla Glass 5, although the flagship-level protection didn’t stop my review sample from shattering on the first (accidental) drop.

Elsewhere, you’ll find a USB-C port alongside the coveted 3.5mm headphone jack and a fingerprint scanner built into the side-mounted power button.

Display: Wait, is that a 90Hz refresh rate?

One of the main highlights of the Realme 6 Pro is the 90Hz display. Admittedly it’s not a feature specific to the Pro model – the standard Realme 6 also sports a 90Hz display – but it’s a pleasant surprise on such a cheap smartphone range. High refresh rate displays have been exclusive to high-end smartphones up until this point, so it’s great to see the flagship tech trickle down to budget-friendly options.

For those unaware of what this means in terms of daily use, a 90Hz refresh rate provides a faster, smoother, more responsive viewing experience whether you’re scrolling through Twitter or playing mobile games. It’s a noticeable change from the standard 60Hz, which is still in use in flagships like the iPhone 11 Pro, although it is very much something you have to experience with your own eyes. 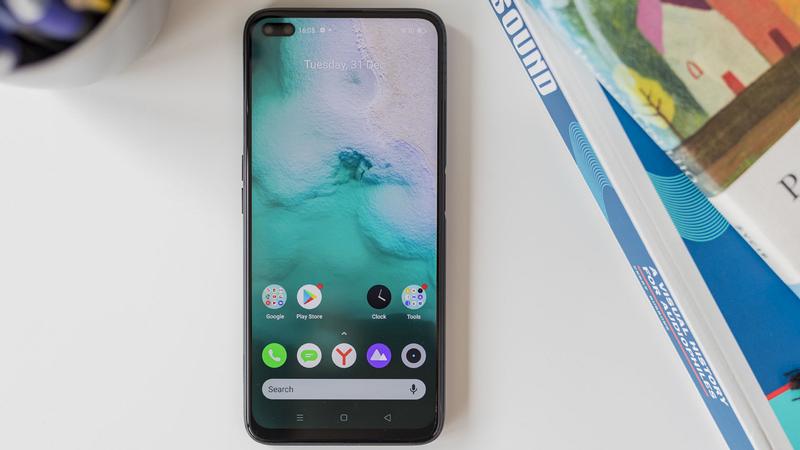 You’ve got the option to choose between 60- and 90Hz in the settings menu, or you can opt to let the smartphone automatically switch the refresh rate depending on what you’re doing. The latter should result in improved battery life, but I for one decided to stick with the 90Hz refresh rate all the time.

Refresh rate aside, you’ll find a bright, detailed 6.5in IPS LCD display on the Realme 6 Pro, complete with dual holepunch camera in the top-left. That’s an almost unnoticeable 0.1in bigger than the standard Realme 6, and due to the two sharing the same Full HD+ resolution (1080 x 2400), the standard model actually has a marginally better pixel-per-inch density. That shouldn’t be noticeable in everyday use, but it goes to show, bigger isn’t always better. 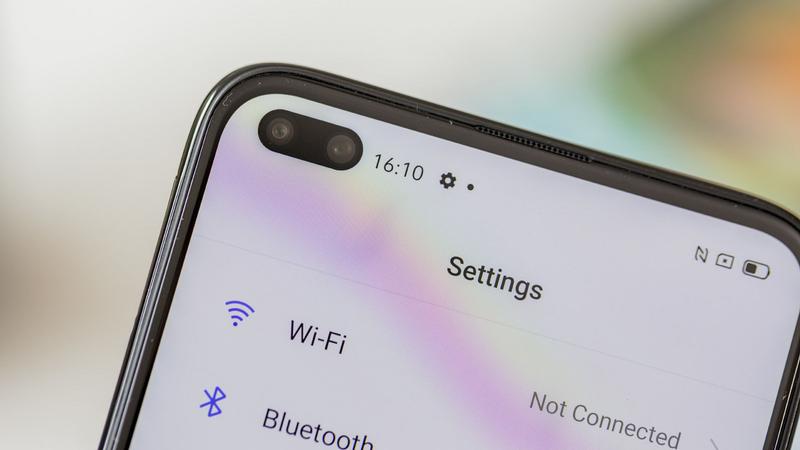 Photography: A suite of cameras

Another reason to pick up the Realme 6 Pro is for the cameras – there are certainly a lot of them. On the rear, you’ve got a quad-camera setup, and if that wasn’t enough, you’ve got both a main 12Mp camera and an 8Mp ultrawide camera on the front.

On paper, there’s a lot to like about the Realme 6 camera’s offering – it certainly has more cameras than most of the competition – but performance can vary amongst the smattering of sensors. 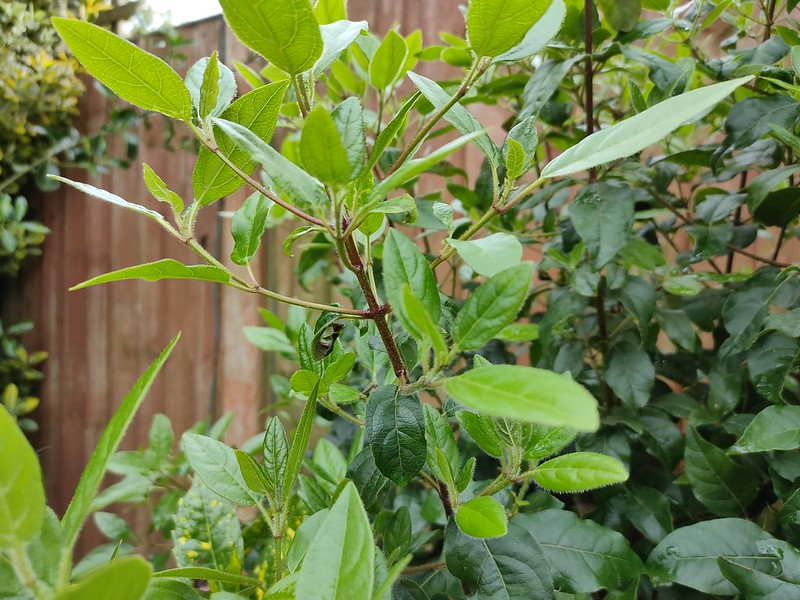 The main 64Mp f/1.8 snapper produces the best results of the range, using pixel-binning tech to improve the detail of the final 12Mp photo produced. Colours are largely bright and vivid with decent level of detail both in well-lit and low-light environments, although the levels of noise rise as the level of light dims. Still, it works well as a point-and-shoot and is capable of capturing decent shots.

The 8Mp ultrawide largely performs the same as the main 64Mp lens in well-lit conditions, and doesn’t suffer from large amounts of lens distortion like other cheap ultrawide lenses, although it can’t quite handle dark environments in the same way due to the f/2.3 aperture.

The 12Mp 2x telephoto lens is a pleasant surprise; while photos captured with optical lenses on budget smartphones tend to be a little bit soft, the Realme 6 Pro focused perfectly the majority of the time. We wouldn’t use it in low-light though; with an f/2.5 aperture, it performs worse than the ultrawide without adequate light. 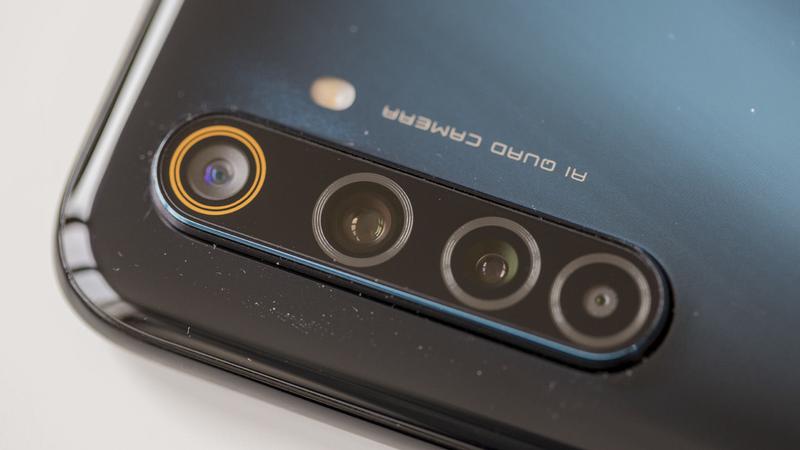 The 2Mp f/2.4 macro camera feels like a bit of a novelty – does anyone really care about macro photography, or is it a relatively cheap and easy way for manufacturers to bump up the camera count?

I personally think it’s the latter, and the performance largely reflects this. You have to be 4cm away from the subject – twice the distance of competing macro lenses from Motorola and Oppo –  and the final images are much softer than I’d like. Without a way to quickly access the macro lens via the camera app, it looks like Realme may want users to focus on the other lenses available.

Other shooting modes include the standard Portrait, Night and Panorama options alongside the ability to capture full 64-megapixel shots. There’s also the option to shoot at 4K@30fps or 1080p at either 30 or 60fps and up to 120fps for slow-mo.

The front-facing camera setup is more than enough for selfie-taking with surprising detail and dynamic range across the two lenses, and the ultra-wide comes in handy when you want to take a group selfie or show off more of the environment you’re in. For the price, there’s not a lot to complain about here. 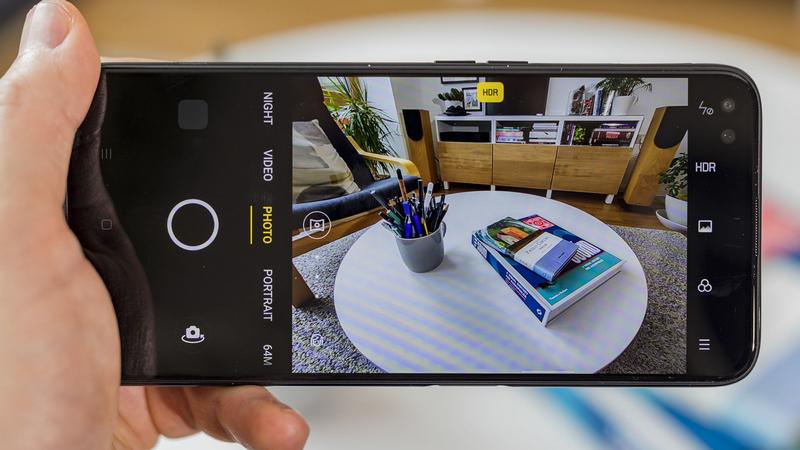 The Realme 6 Pro offers an upgrade in terms of core spec when compared to the standard Realme 6, boasting the 8nm Snapdragon 720G alongside either 6- or 8GB of RAM, but our benchmark results suggest the performance is near-identical between the two – we break this down below.

As you can see, the Realme 6 Pro aligns itself with the similarly-priced Honor 9X Pro, Moto G8 Power and even Google’s Pixel 3a while still offering unique features like the 90Hz refresh rate and more cameras than you can shake a stick at. In real-world use, the Realme 6 Pro works well; general use is smooth, further aided by the 90Hz display, and despite the lack of high-end hardware, it can handle games like PUBG Mobile with the highest graphics settings enabled.

The Realme 6 Pro isn’t the most streamlined smartphone on the market at 8.9mm thick, but with a 4200mAh battery under the hood, it’s a sacrifice I’m willing to accept. In real-world use it’d easily last all day with what I’d describe is average use, even with the 90Hz refresh rate enabled. That should be long enough for most, but if you drop the refresh rate down to 60Hz, it should last well into a second day of use without needing a top-up. 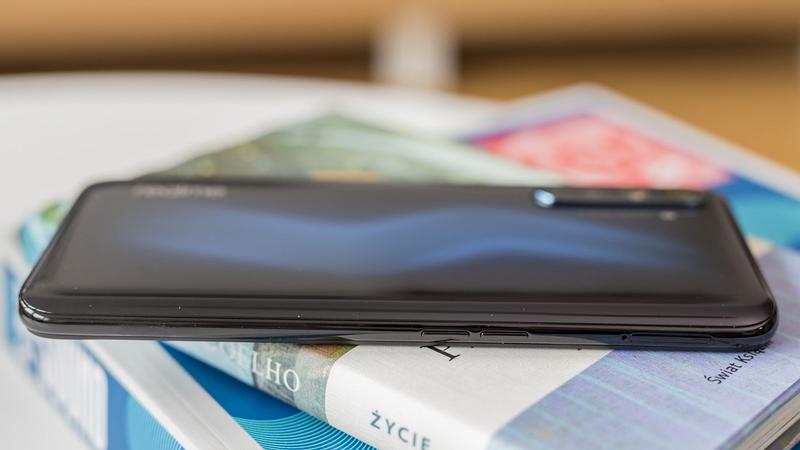 The good news is that 30W VOOC 4.0 fast charging – faster than that of the likes of the Huawei P40 – means you can get 65% charge in only half an hour, with a full charge in little under an hour in our tests. You have to use the charger that comes in the box though – using a standard 30W charger won’t provide the same speeds as a VOOC 4.0-enabled charger. Combined with decent battery capacity, the Realme 6 Pro isn’t a phone that’ll be tethered to the wall often.

In terms of connectivity, you’ll get Wi-Fi 802.11 ac alongside Bluetooth 5.1, NFC, USB-C connectivity and even FM Radio capabilities – as long as you use it with wired 3.5mm headphones. That’s a pretty decent offering considering the price, although there is one big omission: 5G connectivity. If you’re looking for a 5G-enabled smartphone, you’ll probably have to spend a bit more money. We’ve got a list of the best 5G phones if that’s up your street.

Software is usually a pain point when it comes to Chinese manufacturers, and while the Realme 6 Pro does feature Realme UI (based on Android 10), it’s one of the cleaner interfaces I’ve seen. 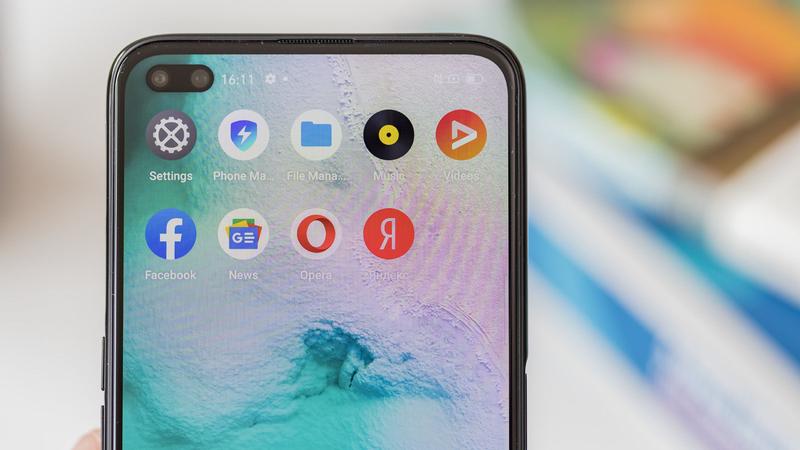 It’s not quite stock, featuring cartoony, colourful icons and a less-than-useful Smart Assistant to the left of the homescreen in place of Google Assistant on many competitors, but there are some pros too – namely the handy shortcut bar, accessible by swiping on a movable tab that sits on the side of the display.

If you really want stock Android 10 then budget options from Nokia and Motorola may be better for you, but I’d argue that Realme UI is a decent alternative.

The Realme 6 Pro is now available to buy in the UK via Realme and Amazon, and it’ll cost you £299. That’s a considerable jump from the £219 Realme 6 and, honestly, there aren’t many differences between the two. At £249 it’d be a no-brainer upgrade from the standard Realme 6, but at £80 more for a 0.1in display increase, a macro lens on the rear and a wide-angle selfie camera make it harder to justify – especially when, based on our benchmarks, the two perform at a similar level.

That price tag puts the Realme 6 Pro up against the likes of the Moto G8 Plus, Nokia 7.2 and Oppo A9, none of which offer the 90Hz refresh rate on offer from the Realme range. If you do want to consider your options, I recommend taking a look at our selection of the best mid-range phones.

The Realme 6 Pro is a great smartphone at a competitive price when compared to the competition, but Realme’s biggest competition is itself. The 90Hz refresh rate is the star of the Realme 6 range – the tech was exclusive to flagship smartphones in 2019, so to see it on such a budget-friendly option is surprising, and helps provide the premium experience on offer from the 6 Pro.

It looks great, it runs smoothly no matter what you’re doing and the six cameras split across the front and rear are more than enough for the everyday consumer, even if the performance does vary amongst the lenses. Throw in features like a side-mounted fingerprint reader, 30W VOOC 4.0 fast charging that provides around 65 percent battery in half an hour and the latest connectivity options – bar 5G – and you’ve got an incredible smartphone at a fraction of the cost of a 2020 flagship.

The catch? The Realme 6 Pro comes in at £80 more than the standard Realme 6 and only offers what I’d consider minor upgrades, including a 0.1in display size increase, a macro lens on the rear and an additional selfie camera. There’s also a supposedly upgraded processor and more RAM available, but as seen in the benchmark results, this doesn’t really make much of a difference in real-world use.

If you’ll get the most out of the wide-angle selfie camera and macro lens then the Realme 6 Pro is a great option, but if you can live with fewer lenses, you could save yourself a bit of cash with the standard Realme 6.