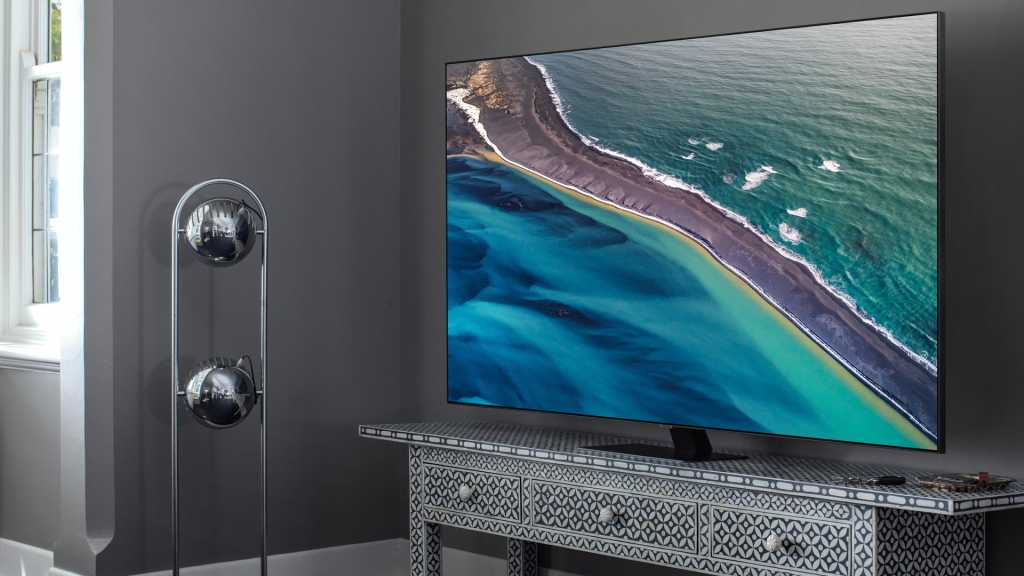 The Q80T isn’t far off flagship calibre in Samsung’s 2020 QLED line-up. The step-up Q90T has more dimming zones and even brighter HDR, but when it comes to features and functionality we’re probably splitting hairs. It gets a big thumbs up.

The Q80T is the most affordable flatscreen model in Samsung’s 2020 QLED FALD (Full Array Local Dimming) line up.

It sits below the brand’s 4K Q90T flagship, but shares much of that model’s advanced feature set, including superior HDR handling, OST sound (more on which later) and smart connectivity, courtesy Samsung’s well-stocked Tizen smart platform.

The Q80T isn’t exactly svelte. Thanks to that backlight array, the set is slightly deeper than edge lit models, but not intrusively so. Viewed square on, the bezel is at least extremely thin. A single central pedestal stand is easy to live with.

The TV comes with two remote controls, one heavily buttoned (which I naturally used), the other simplified (which I left in the box).

Samsung has stepped back from its separate One Connect box concept we saw on the Samsung Q7F, so what we have here is a standard array of inputs on the rear of the set.

There are four HDMI ports, boasting many of the advanced features commonly associated with version 2.1. There’s 4K at 120fps on HDMI 4, eARC on HDMI 3, plus VRR (Variable Refresh Rate) plus ALLM (Auto Low Latency Mode), along with FreeSync support for AMD PC gamers.

There’s ongoing chatter about possible G-Sync anti-tearing tech for Nvidia coming via firmware, but no official word on that yet. Gamers still have plenty to cheer about though. The screen measures exceptionally well when it comes to image lag.

With Game Motion Plus (a suite of image enhancements to improve gameplay graphics) engaged, I measured a low latency of just 19.7ms (1080/60). Switched off, image lag drops to a mere 8.7ms, which is insanely good for a consumer TV.

The set offers both terrestrial (but not Freeview Play) and dual satellite tuner inputs.  Wired Ethernet is available to support Bluetooth.

As befits Samsung’s QLED technology, the Q80T shines when it comes to image clarity and colour fidelity.

Picture processing is handled by the latest iteration of Samsung’s 4K Quantum upscaler, which now uses AI techniques to improve interpolation and texture creation. This is particularly noticeable when upscaling lower res sources.

A grotty OTT stream (from the WWE app), which looked ropey on an OLED, was somehow magically imbued with believable detail and image depth on the Q80T. The processor also does a superb job smoothing gradations and reducing jaggies from HD and lower sources.

If you want to refresh your Blu-ray and DVD collection, this set will work wonders.

The provision of local dimming gives the Q80T a big boost when it comes to HDR, and backlight uniformity. Samsung isn’t talking about the number of dimming zones in the set, but we believe it’s comparable to last year’s Q70R, which is around 50.

I measured HDR peak brightness at just under 900 nits (cd/m2), an above average performance.

There’s no support for Dolby Vision, for some reason Samsung has dug its heels in over the technology, but it is compatible with rival dynamic metadata format HDR10+, as well as regular HDR10 and HLG.

Black level performance is impressive, although I did notice some blooming effects, particularly in the letterbox bars of movies. This light pollution was always fleeting though.

Motion handling is excellent. You’re given a choice of Auto or Custom; the latter with individual blur and judder reduction slider. Motion interpolation is generally a matter of taste, so it’s worth experimenting with these to find the balance you prefer.

Samsung offers up a fresh take on TV audio here. Described as a 2.2.2 configuration, the Q80T combines regular downward firing stereo drivers with two more mounted high on the rear of the set.

Combined with the brand’s OTS (Object Tracking Sound) technology, which steers sound to match movement around the panel, the set creates a virtual sonic wall. Total audio output is a considerable 60W.

The screen is also Dolby Atmos compatible, and will pass through an Atmos bitstream to a compliant soundbar or sound system, if you need to.

The price ticket is a little toppy for a 55-incher, putting it in direct competition with LG’s 55-inch OLED C9, and Sony’s 55-inch AG8 OLED. Luckily it has some tricks up its sleeve.

Check our chart of the best TVs to see what other options you have.

Samsung has designed the Q80T for the widest possible appeal. In a bright room, few models look as colour rich with such strong contrast. The provision of a full array backlight also goes some way to satisfying home cinema fans who demand more HDR precision.

However the biggest winners are gamers, who’ll not only benefit from a range of special features, but enjoy class leading low latency.

We rate the Q80T a premium performer that (by and large) justifies its premium price point.