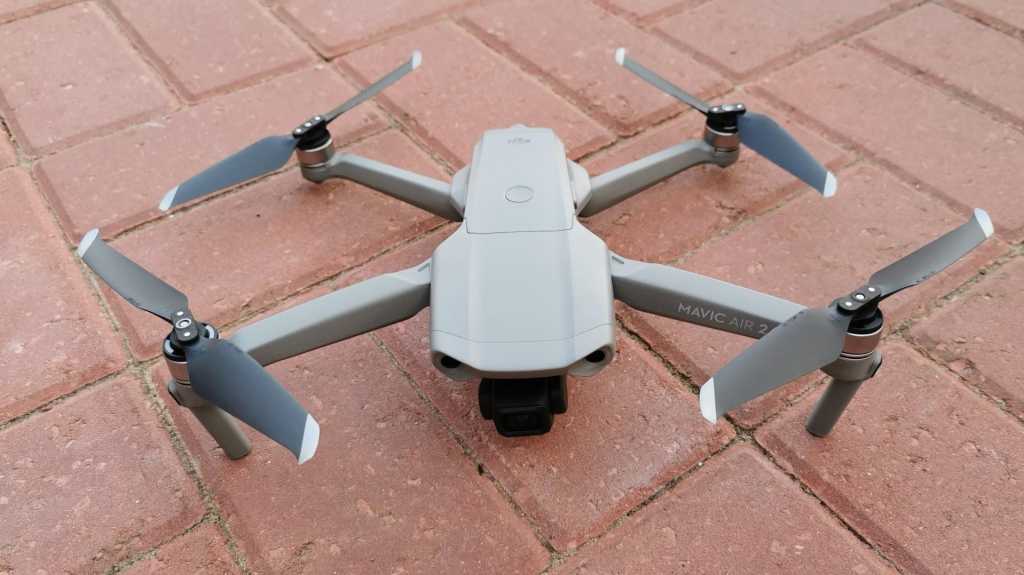 The Mavic Air 2 is an excellent choice if you’re after a drone to shoot video for fun. It bridges the gap between toy and pro drones.

As soon as the Mavic Air went out of stock on DJI’s website towards the end of 2019 it was a clear sign a new model was on the way. The Mavic Air has – until its successor arrived – sat unchallenged at the top of our best drones roundup since it launched. And while you may say there are better choices out there, we’re talking about consumer drones here.

We had high hopes the Air 2 would raise the bar for video and that is exactly what DJI has done. Now, for under £800 / $800 you can buy a drone that will shoot 4K footage at 60fps with a higher bitrate than any Mavic thus far.

Plus, it will shoot HDR video at up to 4K/30 and has a more smartphone-like camera experience with scene detection and a ‘night mode’ and HDR photos. 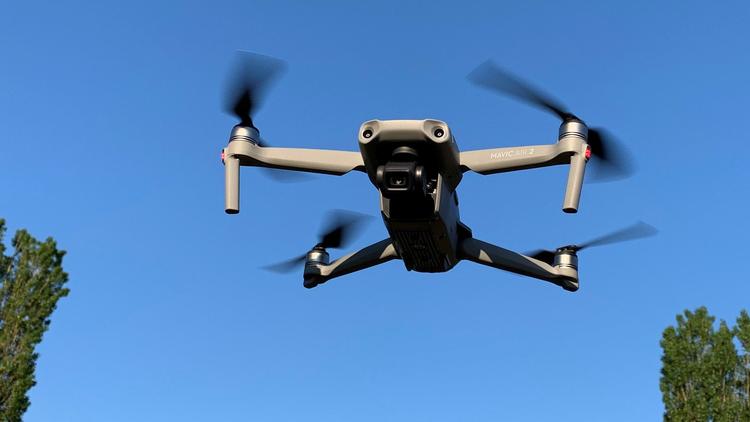 Add to this the easier-to-use DJI Fly app, a much longer flight time, the brilliant new controller and some very smart automatic flight modes and there’s no contest: the Mavic Air 2 is the new king of consumer drones.

The UK, along with most of the rest of the world, was under lockdown while we had the drone to test, and this meant opportunities to fly were very limited.

However, we did get to try out enough to conclude that, with a couple of caveats, you won’t regret buying one.

Impressively, pricing has remained the same: £769 / $799. The Fly More kit also costs the same at £949 /$999. It includes an additional two batteries, shoulder bag, charging hub and ND filters (see below).

You can pre-order a Mavic Air 2 immediately, but it doesn’t go on sale until the middle of May, unless you live in China in which case you can buy one right now.

For alternative options, check out our roundup of the best drones.

The Air 2 has had a complete redesign: this isn’t the old model with some internal updates. Everything is new, although the design itself – and the rather boring grey plastic finish – is clearly inspired by the Mavic 2. DJI is billing it as the ‘smartest’ consumer drone rather than the flagship of the consumer range, hinting that a Mavic Pro 3 might arrive soon. 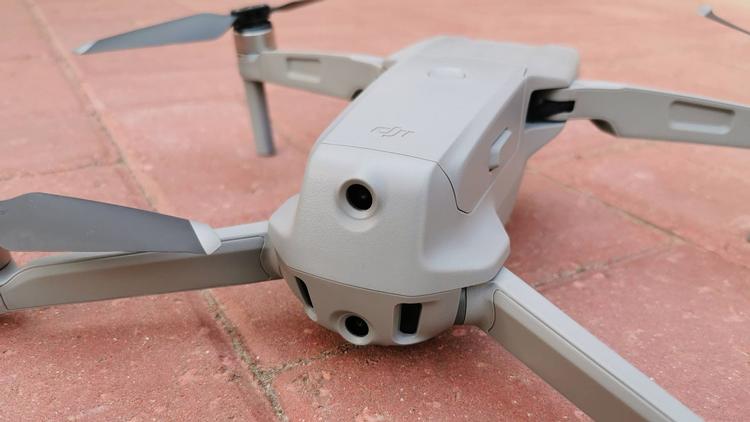 To increase flight time from 21- to 34 minutes, DJI has improved the motors, ESCs, battery and the drone’s aerodynamics.

Weight has increased a fair bit from 430- to 570g, which is largely down to the bigger-capacity battery which, at 3500mAh, is around a third more than the Mavic Air’s 2375mAh units.

Rear and down-facing obstacle sensors work with the front-facing pair to help keep the drone out of trouble, and there’s APAS 3.0 which attempts to figure out a flight path around, over or under objects while you concentrate on what the footage looks like.

DJI also added a landing light – the yellow LED in the middle – so it can still land in poor lighting conditions. 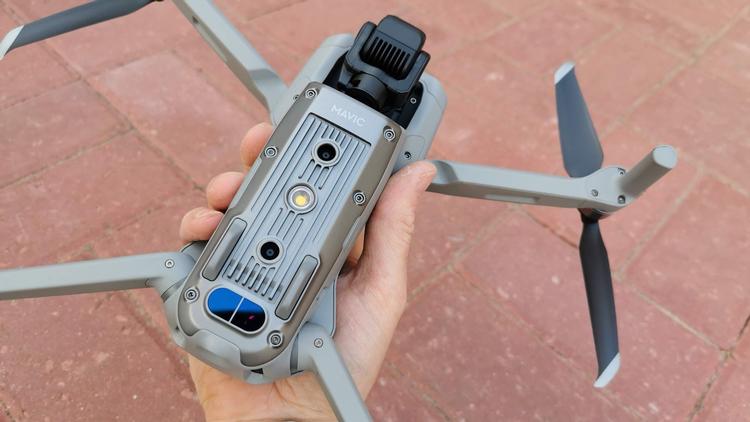 There are no left/right or upwards facing sensors for all-round sensing, so the Mavic Air 2 isn’t quite the ultimate in this respect. But it does a good job of avoiding trees and foliage in general. (This could be a deal-breaker, but so long as you understand the limitations and fly in appropriate areas, it shouldn’t be.)

The battery now clips in from the top and has a diamond-shaped LED arrangement which isn’t as intuitive for reading remaining battery power as the old straight line approach. But you quickly get used to it. 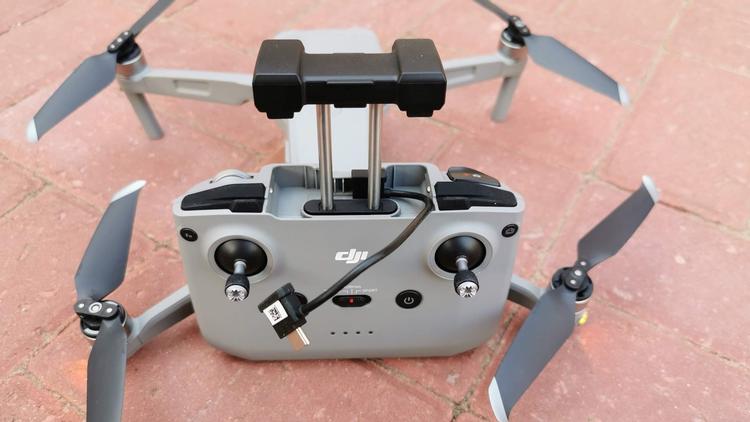 A considerably bigger change is the fantastic new controller. This puts your phone above the controls, making it a lot more ergonomic. The spring-loaded clamp pushes into the controller when not in use, and the control sticks unscrew and are stored in the bottom edge. 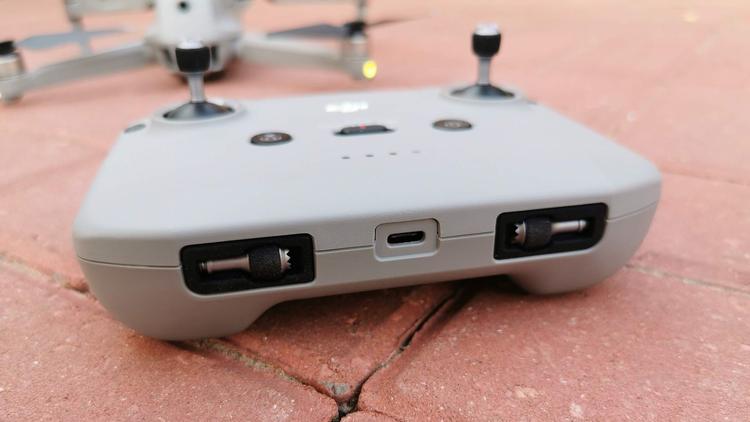 It’s easy to put your phone in the clamp, and the clever design means it doesn’t press on any of your phone’s buttons. Wires are supplied for Lightning, USB-C and micro-USB and this provides the video feed from the drone as well as charging your phone.

A switch makes it simple to enable Tripod mode, Normal mode and Sport mode without fiddling with settings in the app.

If you’re used to DJI Go 4, the Fly app can feel a little basic, but in reality all the settings and information is there: it’s just not necessarily right there on the main screen. This results in a much cleaner look that’s definitely better for beginners and the app even includes tutorial videos to teach you how to fly.

Geofencing prevents you from flying where you shouldn’t (such as near airports) and recommends ‘Fly Spots’ which are ideal for aerial photography.

FocusTrack is worth highlighting as it not only includes ActiveTrack 3 (which automatically follows a subject and works brilliantly) but also Spotlight 2.0, something found on DJI’s high-end Inspire 2 drone. This keeps your subject in the frame while you have full control over where the drone is flying.

Completing the trio of tracking tricks is POI 3.0 which can fly around a point of interest, yes, but can also track a moving car or person.

Everything is built into the app for shooting and editing, although the built-in templates are next to useless still as you can’t remove the default captions and overlays. A separate Pro tab gives you access to an iMovie-style video editor which gives you a lot more control and freedom.

However, you’ll probably still prefer to transfer the original footage to your PC or Mac and use a desktop computer for editing rather that using the lower-quality cached clips on your phone, or wait ages to transfer video from the drone to your phone.

Quickshots can be processed and shared in seconds, however.

In terms of range, the US version can beam back HD video from as far as 10km away thanks to Ocusync 2.0, but in Europe – including the UK – regulations on transmission power restrict it to around half that. And, in real world conditions, expect around half of the claimed figures… and also respect local laws which may require you to keep the drone in your line of sight, making such huge range a moot point. For the purposes of testing, we flew up to around 1km away and had no issues with signal loss or video breakup. 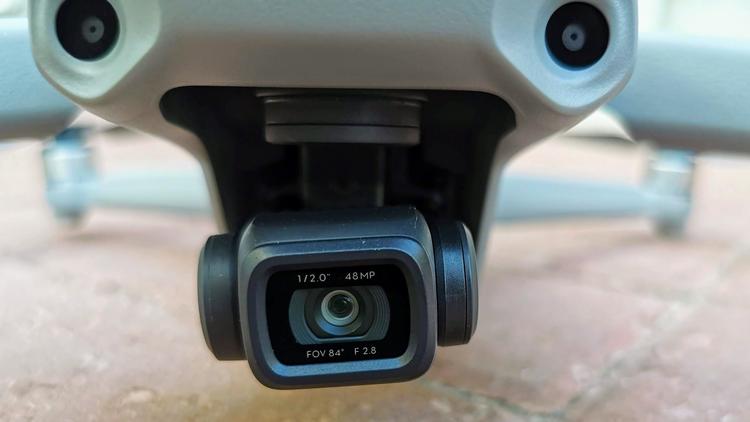 So the Mavic Air 2 is easy and pretty safe to fly. What about the camera? Unofficially the sensor is the Sony IMX586, a 48Mp unit which uses pixel-binning to create 12Mp photos. Effectively it turns 0.8 μm pixels into 1.6 μm pixels, which means better light sensitivity.

Quite a few phones use this sensor from the Honor View 20 to the OnePlus 7 Pro and Xiaomi Mi 9. It’s not the latest or best sensor, but it is well-suited to the Mavic Air 2 and offers better performance in low light compared to its predecessors.

You’ve a choice when shooting video: standard, HDR or slo-mo. You may prefer standard because it’s the only one which offers the full 60fps in 4K, but slo-mo at 1080p now offers double the framerate of the Mavic Air at 240fps.

For photos you can use the sensor’s 12Mp mode or the full 48Mp and you can pick JPG or JPG + DNG (RAW). If you want more than a simple still, there’s exposure bracketing and burst modes, but the 3×1 or 3×3 HDR panoramas are likely to be your favourites.

Quality is what you’d expect from a flagship phone, so photos are great for sharing online, but not on a par with those you’d get from a DSLR. That’s no surprise, and you can get more resolution if you opt for the panoramas. And use an ND filter to avoid blown out skies and highlights.

Finally, there’s Hyperlapse which is like time-lapse video but while the drone is moving. An early version of the headline 8K Hyperlapse mode was disappointing: the interval was fixed at a too-long 6 seconds and the quality of the resulting footage was not as good as we were hoping for. Oddly there is no 4K Hyperlapse  mode currently, so the next step down is 1080p.

Whether this is your first drone or not, the Air 2 is a breeze to fly. The app has sensible default settings such as maximum height, RTH altitude and also that obstacle detection and avoidance is on by default.

That means if you try and shoot a Helix QuickShot but there’s a tree in the way, it will automatically stop rather than crashing.

Despite no left or right sensors, the Mavic Air 2 does a pretty good job of stopping when it senses trees and other large objects. Only when you are flying sideways is there a potential to collide with something. So, avoid starting QuickShots when there are trees around.

Here’s a processed DNG file which manages to retain details in the shadows despite facing directly into the sun. Impressive stuff. 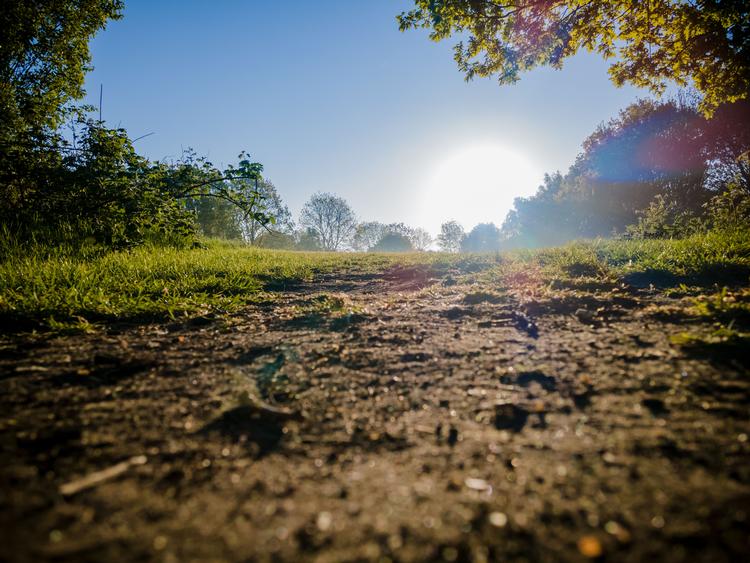 In terms of quality, expect similar levels of detail and sharpness to phones which use the same 1/2in sensor. The Mavic 2 Pro may only shoot 4K at 30fps, but the 1in sensor makes a huge difference, as does the fact it can shoot 10-bit colour in D-Log.

While the Air 2 can be set to D-Cinelike colour profile, it only records 8-bit colour and most owners will stick to the automatic settings anyway. If you really want to colour grade your own footage, it is a nice option to have.

Speaking of those, we shot our test footage in the Normal colour profile at a mixture of 4K60 and 1080p/240. Unfortunately we were severely limited on how much flying time we got before DJI’s embargo lifted due to the UK lockdown because of coronavirus.

From the footage we were able to capture, we can say that quality is really very good for the price. No, it can’t match the clarity of the Mavic 2 Pro, but it comes close and – remember – offers that useful 60fps mode in 4K that you’d otherwise have to . Rather than writing paragraphs about it, instead you can make up your own mind by watching the video below. Obviously you will need a 4K TV or screen to see it in its full glory.

The fact that DJI is bundling ND filters in the Fly More kit shows that the Mavic Air 2 is a serious tool and not a toy. We were sent the standard version for review, but would have liked to have tried out a filter, which would surely have improved our footage. If you’re unfamiliar, check out this guide to ND filters.

The Mavic Air 2 looks to be the consumer drone to buy. It’s compact, has a sensible flight time, a great controller and records at 4K60.

It’s also very easy to fly and has the ability to track people, cars and other subjects while executing complex flight paths, making it ideal for beginners.