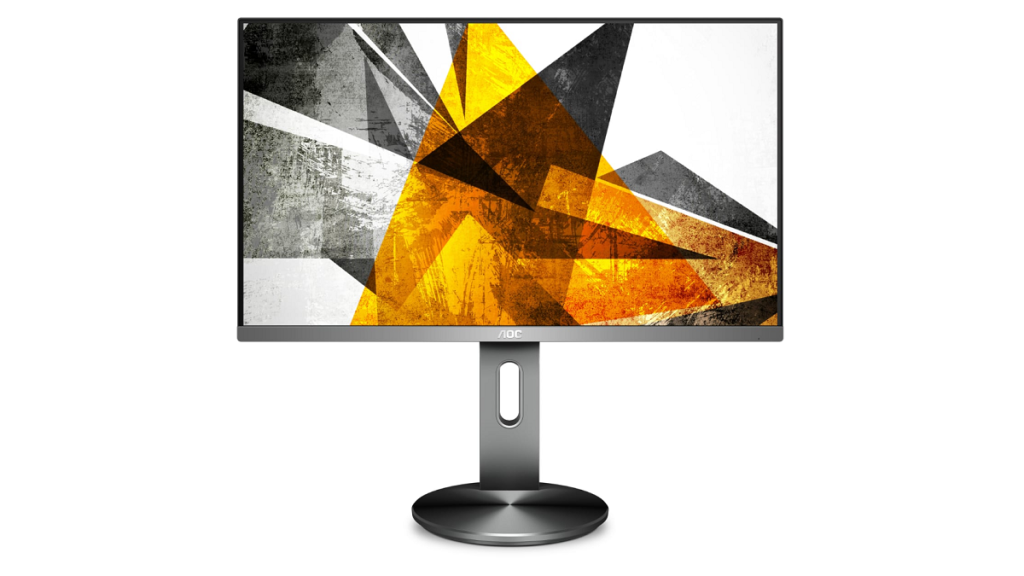 The AOC U2790PQU looks good and has decent features alongside a 4K resolution, a low price and solid colour accuracy – so it’s a great mainstream 4K option for the home and office. However, its poorer contrast and uniformity mean it’s not suitable for more intensive workloads.

The AOC U2790PQU is a 4K monitor with smart design and a broad range of features – which means that it’s equally at home in the office or at home.

The 27in diagonal means this screen is crisp and detailed without being overly large, and its surprisingly low price makes this one of the most affordable 4K panels on the market.

The AOC U2790PQU looks smart and stylish. Its base is a minimalist circle of sandblasted metal, and the stand and the thicker bottom bezel have the same attractive finish. The other three bezels are slim, which makes multi-monitor setups easier to handle.

The base and stand don’t just make the AOC display look smart. The flat surface makes it easy to keep phones and other items on your desk, and the stand has a large cable-routing hole – so everything can be tidier.

Build quality is decent, and the weight of 6.5kg is fine – light enough to make movement relatively painless. A quick-release mechanism on the rear of the panel makes building simple.

The AOC matches its mature design with some practical features. This panel has a solid 130mm of height adjustment, and it can tilt forwards and backwards, swivel 45° in each direction and pivot to portrait mode. It’s also compatible with 100mm VESA mounts.

Display input is handled by two HDMI ports and one DisplayPort connection, although bear in mind that only one of those HDMI ports has the ability to run this 4K panel at 60Hz. Elsewhere, there are two USB 3.0 ports and an audio jack. That’s reasonable, but it’s a shame that no USB-C is included.

There are some other areas where this affordable 4K panel is found wanting. The on-screen display, for instance: the joystick navigation method is fine, but the menu is slow, with plodding animation and irritating loading times. It’s huge, too – it stretches right across the bottom of the display.

The pair of 2W speakers are disappointing: tinny and without much volume. They won’t even really handle background music while you work, and even affordable desktop units will do a better job. It’d be better if they weren’t there and the monitor was even cheaper.

The 4K resolution and 27in diagonal means that the AOC has a pixel density of 163ppi. That’s huge – among the highest you’ll find on any consumer screen. It means that text, applications and images are incredibly crisp – even if you’re up close, you can barely make out the pixels.

The sharp density level means that the AOC can handle photo and video tasks with incredible detail, and the high resolution means ample on-screen real estate for large apps and multiple windows.

On the inside, the AOC uses IPS technology with 10-bit colour. That latter attribute is important – it means this screen can render more than one billion shades of colour. Many panels at this end of the market use 8-bit colour, which means they can only handle 16.7 million shades.

Elsewhere, the AOC’s specification is a little more limited. Its 5ms response time is fine for home and office use as well as for mainstream gaming, but it’s not fast enough for fast-paced games and esports – those titles will be hampered by motion blur. Similarly, the 60Hz refresh rate is acceptable for mainstream work, media and gaming use, but gaming panels at this price will be more than twice as quick.

When it comes to quality levels, the U2790PQU is middling. AOC’s colours are a high point: the Delta E of 0.94 is excellent and means no detectable deviations, and the colour temperature of 6,856K is close enough to the 6,500K ideal to mean that most users won’t be able to tell the difference.

The AOC rendered 96.3% of the sRGB colour gamut with 108.8% volume, which is impressive – it means that this panel can produce virtually every shade required by mainstream work tasks. However, this display doesn’t have the gamut width to handle Adobe RGB or HDR applications and situations.

The AOC’s brightness measurement of 316cd/m2 is decent – easily high enough to cope with work, media and gaming duties.

However, IPS screens aren’t known for their contrast, and the AOC does suffer here. Its black level of 0.36cd/m2 is mediocre, the display’s measured contrast ratio of 878:1 is underwhelming. These results won’t make a huge difference to mainstream photo work and to daily media tasks, but it does mean that darker areas will lack depth and that colours aren’t particularly punchy.

The AOC’s uniformity is disappointing, too. The backlight lost 22% of its strength on the left-hand edge and 20% on the right-hand edge, and it also lost more than 10% in the corners. That’s disappointing for a 27in screen, and it means that this display isn’t consistent enough for some professional work.

This precise model isn’t available in the US, but buyers on that side of the Atlantic should seek out the AOC U2790VQ – it’s virtually the same screen, and it costs $296 from Newegg.

Take a look at our best monitor chart to see what other options you have.

The AOC U2790PQU is impressive in some key areas: its 4K resolution means huge detail and space are available for work and media duties, and this solid specification is paired with a versatile, sturdy and stylish exterior.

AOC’s screen has great colour accuracy, but it does falter in some other on-screen areas: its contrast is a little underwhelming and its uniformity is poor.

The lack of contrast and poor uniformity mean this screen isn’t suitable for more demanding work scenarios, but it remains a good option if you want a versatile and affordable 4K display for mainstream work and home use.