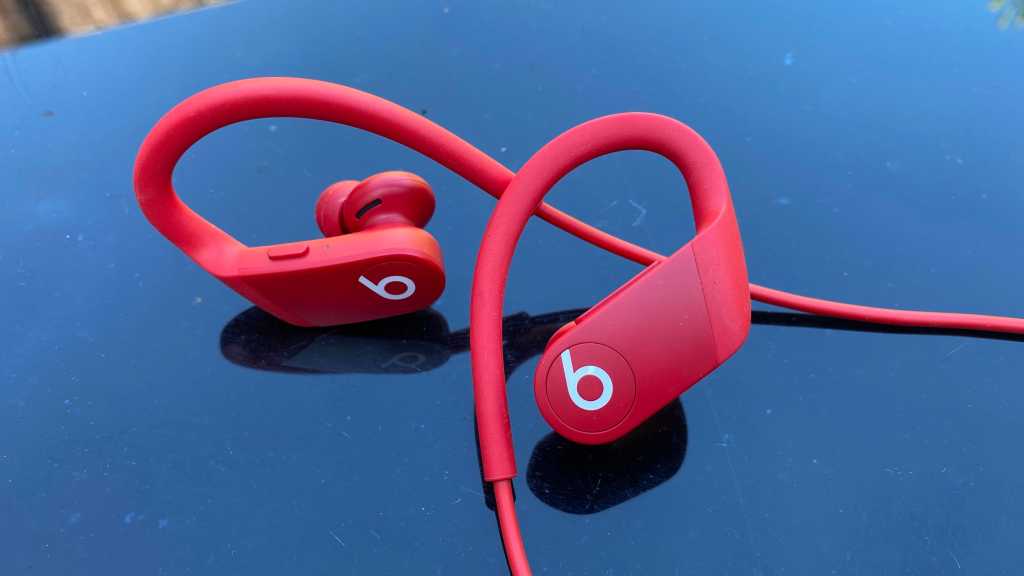 The Powerbeats are a solid option for those looking for fitness-focused earbuds that won’t fall out mid-run. The over-ear hooks, though stiff and sometimes awkward to put on, provide superior security, and the fact that there’s no weighty neckband means you won’t get a buildup of sweat during intense workouts either. Combine that with great quality audio, punchy bass and an affordable price tag and you’ve got a great pair of wireless neckbuds.

Apple-owned Beats has released a new budget-friendly pair of sport-focused wireless neckbuds – the Powerbeats. Undercutting 2019’s Powerbeats3 in price while offering more advanced functionality and great audio, the Powerbeats could be a strong contender in the fitness-focused headphone market. Carry on reading to find out why.

Unlike most neckbuds on the market, the Powerbeats don’t feature a thick neckband that rests around your neck – instead, you’re treated to a simple, streamlined round cable that’s barely noticeable when worn. It gives the Powerbeats a simplistic look when compared to key rivals like the RHA T20 Wireless and 1More Triple-Driver BT, and helps avoid the build-up of sweat beneath the neckband during intense workout sessions while still offering the ability to let the earbuds dangle around your neck when not in use.

Without a chunky neckband, the battery, smarts and just about everything else is built into the buds and ear hooks, making them slightly bulkier than standard ear-hook buds, but still comfortable enough to wear over long periods – and that’s further enhanced by the inclusion of three sets of ear tips, helping you find the best fit possible.

The minimalist design of the Powerbeats means all controls are on the earbuds themselves. You’ll find a Beats-branded button on the right bud, and that’s used to change music, answer calls and more, and dedicated on-ear volume controls allow you to adjust volume on the fly. You’ll also find the Power button on the left ear, next to an LED light to indicate the current charge status.

That’s all fine in theory, but I’ve found that there’s a bit of resistance with the Beats-branded button, and I have to press quite hard into my ear to register a press – uncomfortably so at times. There’s a possibility that it could loosen over time, but haven’t found that to be the case over the past few weeks.

The secure-fit earhooks themselves really are secure. I didn’t feel the need to adjust the Powerbeats during exercise, and that’s not something I can say about many earbuds – but the downside is that they’re very awkward to put on and take off.

Even if you adjust the fit to accommodate the shape of your ears, the rigid nature of the hooks means you have to awkwardly squeeze your ear into place, and it’s much the same when taking them off. There’s a trade-off here, but if you’re looking to use the Powerbeats to exercise, the superior fit quashes the awkward process of putting them on.

Beats is owned by Apple, so you should expect a certain level of smarts from the Powerbeats. That includes Audio Sharing – a feature lets you use a single iPhone for audio output for two pairs of Powerbeats (or AirPods) – alongside hands-free Hey Siri support that allows you to wirelessly access Apple’s virtual assistant, all powered by Apple’s H1 new chip. You’ve also got the near-instant connectivity on offer from the AirPods, although you don’t get a pop-up to let you know how much battery you’ve got left like you do with Apple’s wireless earbuds.

The only notable difference in features compared to AirPods is the lack of ear detection, meaning the Powerbeats won’t automatically pause when removed and resume playback when inserted. It’s not a big problem, especially at a sub-£130 price point, but it would’ve been nice to see.

It’s worth noting that these smart features are iOS exclusive – you’ll have to manually pair the earbuds with your Android, and you won’t be able to access audio sharing or hands-free digital assistant activation either, although you can access the latter by holding the ‘B’ button.

Hey Siri support is possible thanks to the combination of Apple’s H1 chipset and a smattering of on-ear microphones that help filter out external noise, and while it works well for Siri requests, it’s not the best for phone calls – recipients had issues hearing me clearly in my tests, even in relatively quiet environments.

In terms of battery life, you’ll get around 15 hours out of the Powerbeats before requiring a top-up via Lightning cable. That’s a lot longer than you’ll get from much of the neckbud competition, and I feel like you could probably squeeze a couple of extra hours out of them with lower volume output.

When it does come to time to charge, Apple claims the built-in Fast Fuel charging tech should provide an hour of use after five minutes of charging. I’ve not found that to be the case – it generally lasts around half an hour or so dependent on volume – but an extra five or ten minutes should provide enough charge for a decent workout.

Even without the quoted fast charge time, the Powerbeats are the ones to beat when it comes to battery life.

Bass that’ll get you moving

Being a Beats-branded product, you’d expect great audio quality and booming bass, and that’s largely true of the Powerbeats. Though I initially thought they were a little underpowered compared to other earbuds, I gave the buds a chance to run-in for a few days and it completely changed the audio experience.

Once ‘warmed up’ the Powerbeats delivered bright, clear audio with incredibly powerful bass that doesn’t noticeably mess with the mids. The bass-heavy nature of the Powerbeats perfectly suits the fitness focus of the buds, with pounding bass of Roses (the Imanbek remix, of course) and Godzilla helping keep me going on strenuous workouts. It’s more than a thud too – you can really feel the fuzzy warmth of the bass that’s usually exclusive to over-ear headphones.

But it’s not simply focused on bass – the Powerbeats perform equally as well in the mids and highs, with crisp, clear vocals and impressive detail. In fact, I picked up on the sound of a chair squeaking in Skinny Love that I’ve never noticed before, and that should say everything about the quality on offer.

Though the Powerbeats miss out on the Active Noise Cancellation (ANC) of the AirPods Pro, the buds do offer decent passive sound isolation – as long as you’ve got the right size earbud for your ears. You’ll get three sets with the Powerbeats, and we recommend taking the time to try all three sets – in addition to quieting the environment around you when listening to your favourite tracks, a good seal can also improve overall audio quality, and that’s certainly the case here.

The Powerbeats can be purchased directly via Apple and via third-party retailers like Amazon for the same price. If that’s a little much for you, I recommend taking a look at our selection of the best headphones and our best true wireless earbuds if you want something discreet.

The Powerbeats are a great option for those looking for fitness-focused earbuds that won’t fall out mid-run. The over-ear hooks, though stiff and sometimes awkward to put on, provide superior security compared to most other over-ear hook systems on the market, and the fact that there’s no weighty neckband means you won’t get a buildup of sweat during intense workouts either.

You’ve also got the Apple-level ease of use when connected to an iPhone, including the use of hands-free Hey Siri and Audio Sharing, although you lose out on this if you connect to an Android.

But crucially, the Powerbeats sound incredible: punchy, powerful bass drives the experience without muddying the mids and highs, offering a great audio experience whether you’re listening to Dubstep or Classical music.