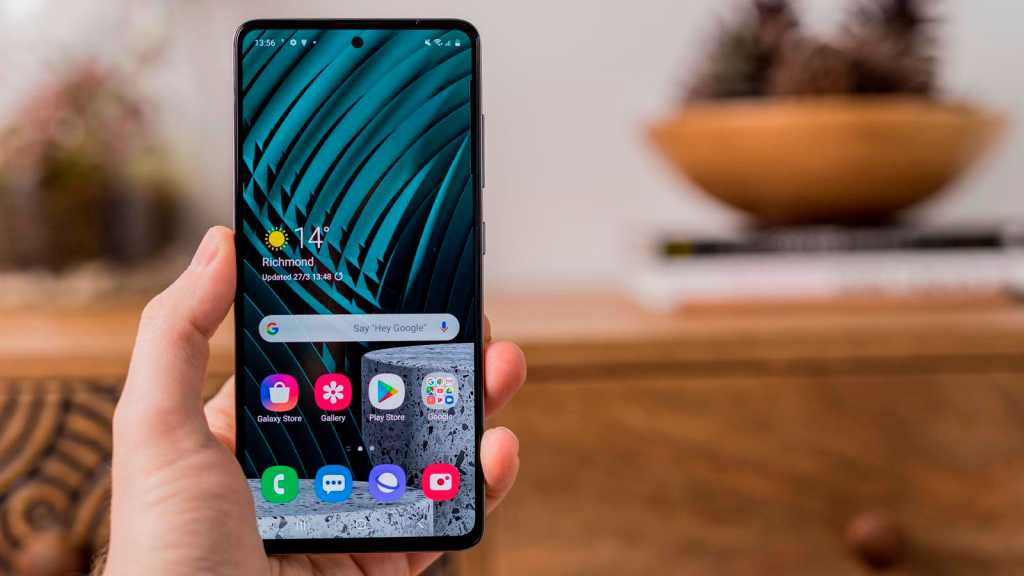 The A51 proves Samsung can make solid mid-range phones. Its flagship-esque design and solid cameras provide the foundations for an excellent handset, while One UI provides an excellent user experience. However, performance is less than impressive, while the poor in-display fingerprint scanner is a big letdown. Samsung fans can look beyond these shortcomings, but at this price point the A51 is hard to recommend.

When you think about Samsung phones, it’s highly likely that the flagship S and Note lines will come to mind. While that and a new generation of foldable phones take most of the headlines, it’s easy to forget the whole array of more affordable devices it releases each year.

2019 was no different, with a staggering 37 phones released in just 12 months. One of the last to arrive was the Galaxy A51, aiming to make an affordable device which doesn’t lose the essence of what has made Samsung so successful.

However, brand reputation will count for little in the fiercely competitive mid-range market, so how does the phone stack up to the competition?

I’m a huge fan of the design of the A51. It looks slick and modern, and could easily pass for a phone more than twice the price on first impressions.

That’s only accentuated in the stunning ‘prism crush white’ unit I reviewed, but you can also get the phone in similarly eye-catching shades of blue and black. 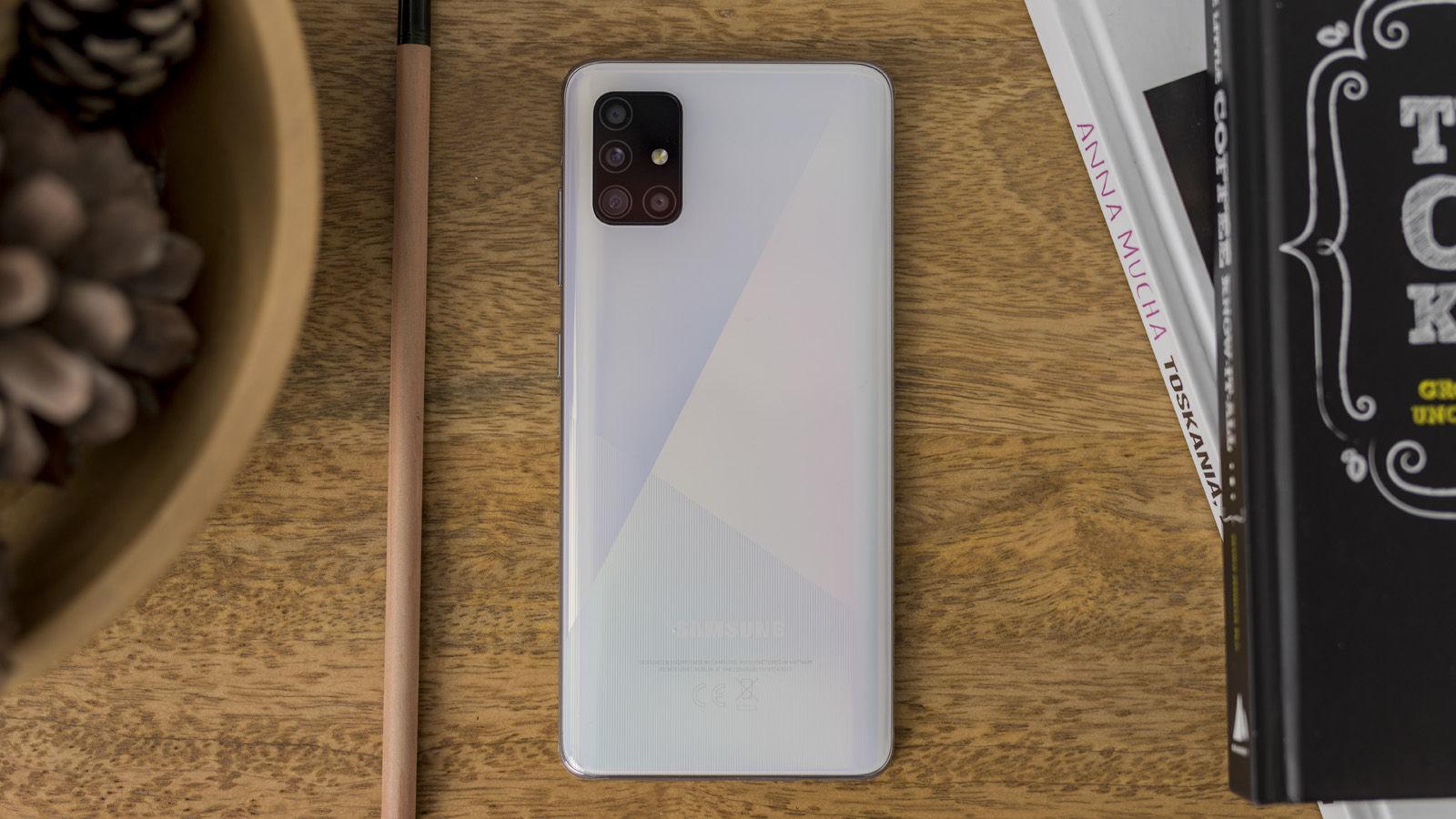 While glass-backed phones regularly make their way down to this price point, Samsung has opted for a plastic design. However, it remains an incredibly slippery phone, which had a frustrating tendency to slip out of my pocket or off the arm of a soft chair. I’d highly recommend throwing on a case.

Elsewhere, there’s a quadruple rear camera setup here. The main 48Mp sensor is joined by a 12Mp ultrawide, 5Mp macro and 5Mp depth lenses. Even the usually prominent Samsung logo blends into the back of the phone, although the way it refracts the light might not be for everyone.

These are arranged in a module which is very much reminiscent of the regular S20, which suggests Samsung uses cheaper phones to trial certain design elements where the stakes are lower.

Flipping the phone over reveals a 6.5in OLED panel at a resolution of 1080×2400. The Quad HD+ screen on the flagships was inevitably going to take a hit, but it’s great to see it stick with OLED technology. Slim bezels are only punctured by a punch-hole front-facing camera, which digitally expands when used for face unlock. Its placement in the top centre of the phone makes it feel more symmetrical, which I like.

The phone feels a lot more compact than the 6.5 inches suggests, which could be due to the 20:9 aspect ratio and impressive 87.4% screen-to-body ratio. However, it might just be me getting more used to big phones.

There’s nothing much to report when it comes to the aluminium sides of the device, which sport some nicely tactile physical buttons and a mono downward-firing speaker. This is perfectly serviceable for the odd social media or YouTube video, but I’d recommend connecting headphones if watching TV shows or films. 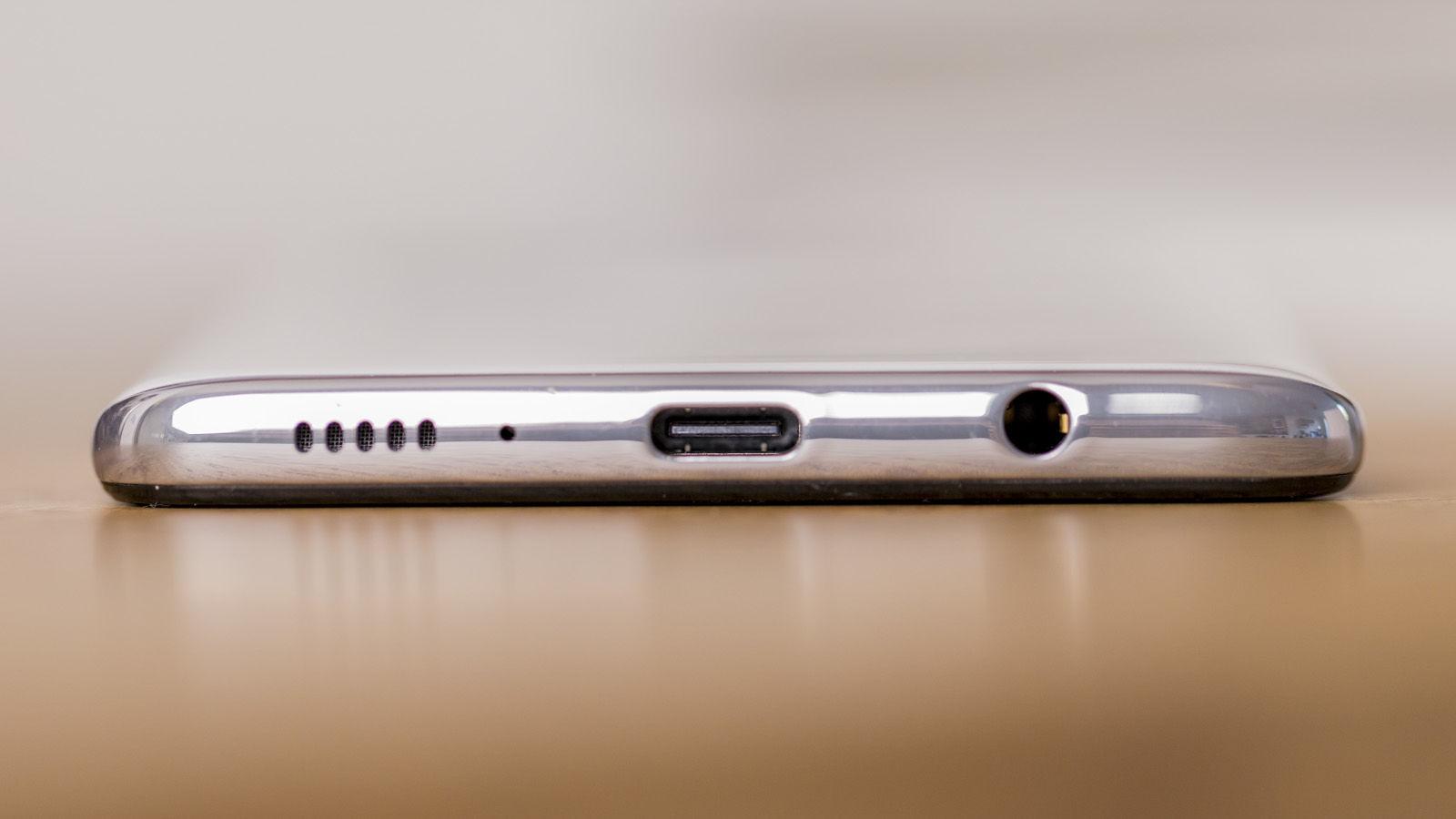 Talking of headphones, these can be connected wirelessly (with Bluetooth 5.0) or wired via the 3.5mm jack. It’s great to see the port retained here, where it’s tucked away nicely next to the USB-C charging port.

If it was hard to tell the A51 apart from flagships on its design alone, the internals tell a different story. The phone comes with Samsung’s own Exynos 9611 processor, considered comparable to Qualcomm’s Snapdragon 730 chipset. It’s decidedly mid-range, especially when combined with a Mali-G72 GPU.

Unfortunately, this phone feels like it needs more processing power. While there’s no lag, moving throughout the UI feels a bit sluggish. The experience might seem more extreme if you’re coming from higher refresh rate displays, but the input delay can make it a frustrating phone to use. This is definitely not helped by just 4GB of RAM, which is the only option if buying in the UK.

If you think this might be a flagship killer, its performance will make you think again. It’s perfectly serviceable for everyday tasks, but falls some way short of high-end handsets.

This becomes apparent when gaming. The A51 is simply unable to handle graphic-intensive titles like Call of Duty and Asphalt, which cause the phone to quickly lag and overheat. While it’s not explicitly designed for games, it’s worth noting that it doesn’t quite offer that complete smartphone experience.

The laggy days of TouchWiz are a million miles away from the latest version of Samsung’s slick UI. It’s much closer to Google’s stock operating system these days, and there are a number of clever software tweaks.

One of the most significant is a dedicated silent mode, which is curiously omitted in favour of Do Not Disturb on Pixel phones.

The information cards to the left of the home screen is now known as Samsung Daily. I didn’t find it as useful as Google’s equivalent, although it does come without much of the Bixby influence we saw on earlier versions.

In fact, Bixby’s appearances throughout the A51 are relatively fleeting, although it will be triggered by default when you long press the power button. Unlike some previous Samsung phones, this can easily be remapped to actually turn the phone off instead!

One area where the phone disappoints is the in-display fingerprint sensor. It’s incredibly impressive to see this feature already on mid-range handsets, even if it is optical as opposed to the ultrasonic on Samsung flagships.

However, I found it very frustrating to use. It was very hit and miss in terms of recognising me, even when I registered the same thumb twice. It was also incredibly sensitive to moisture, and I found myself re-enrolling my fingerprint to ensure it worked at all. 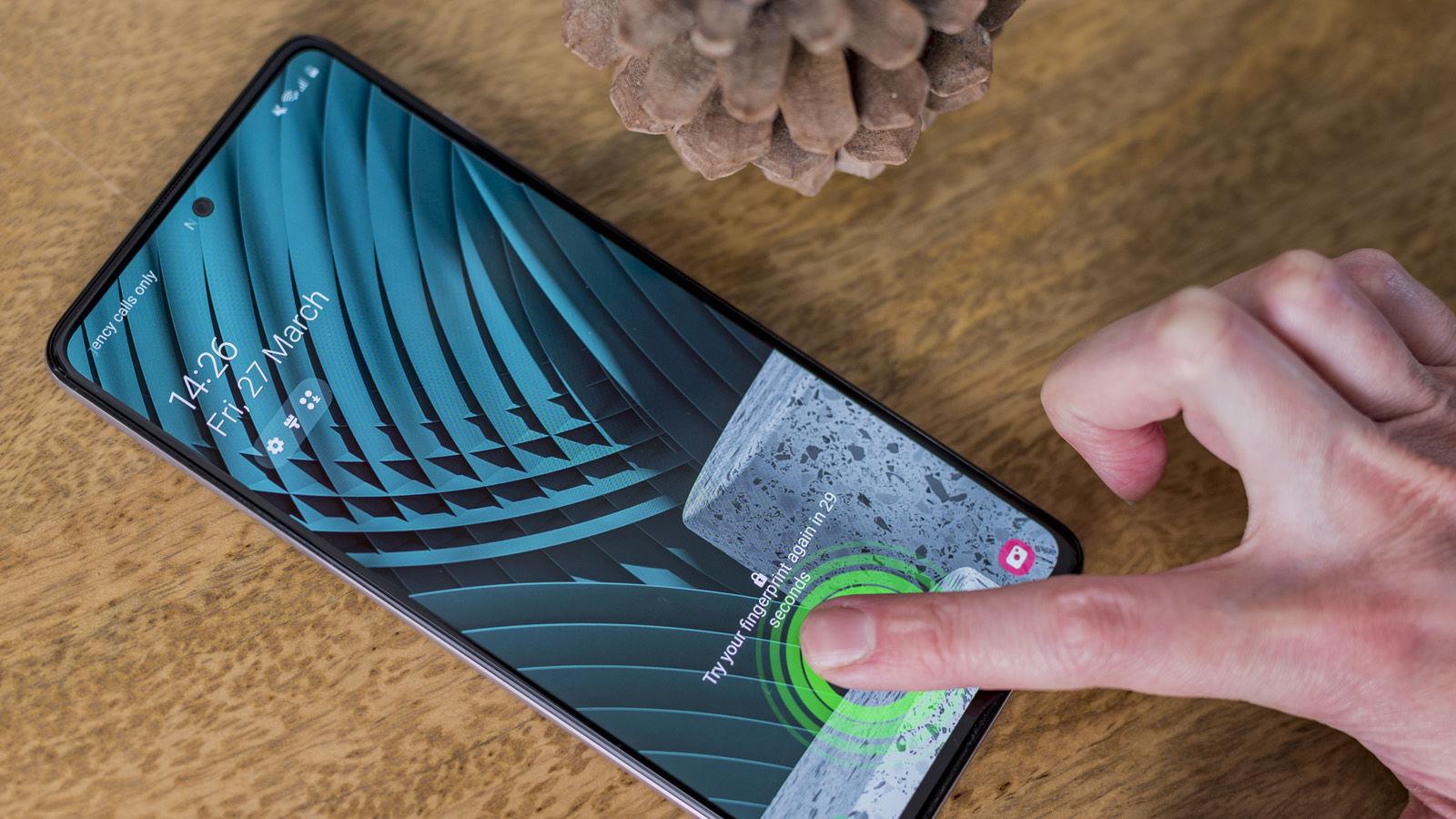 I’d recommend using the face unlock instead, which has proven to be much more reliable.

Nonetheless, One UI 2.0 is a slick and intuitive interpretation of Android that most people will enjoy using. It puts many navigation buttons in the lower half of the screen to be more easily reachable, which was definitely welcomed when using the A51. 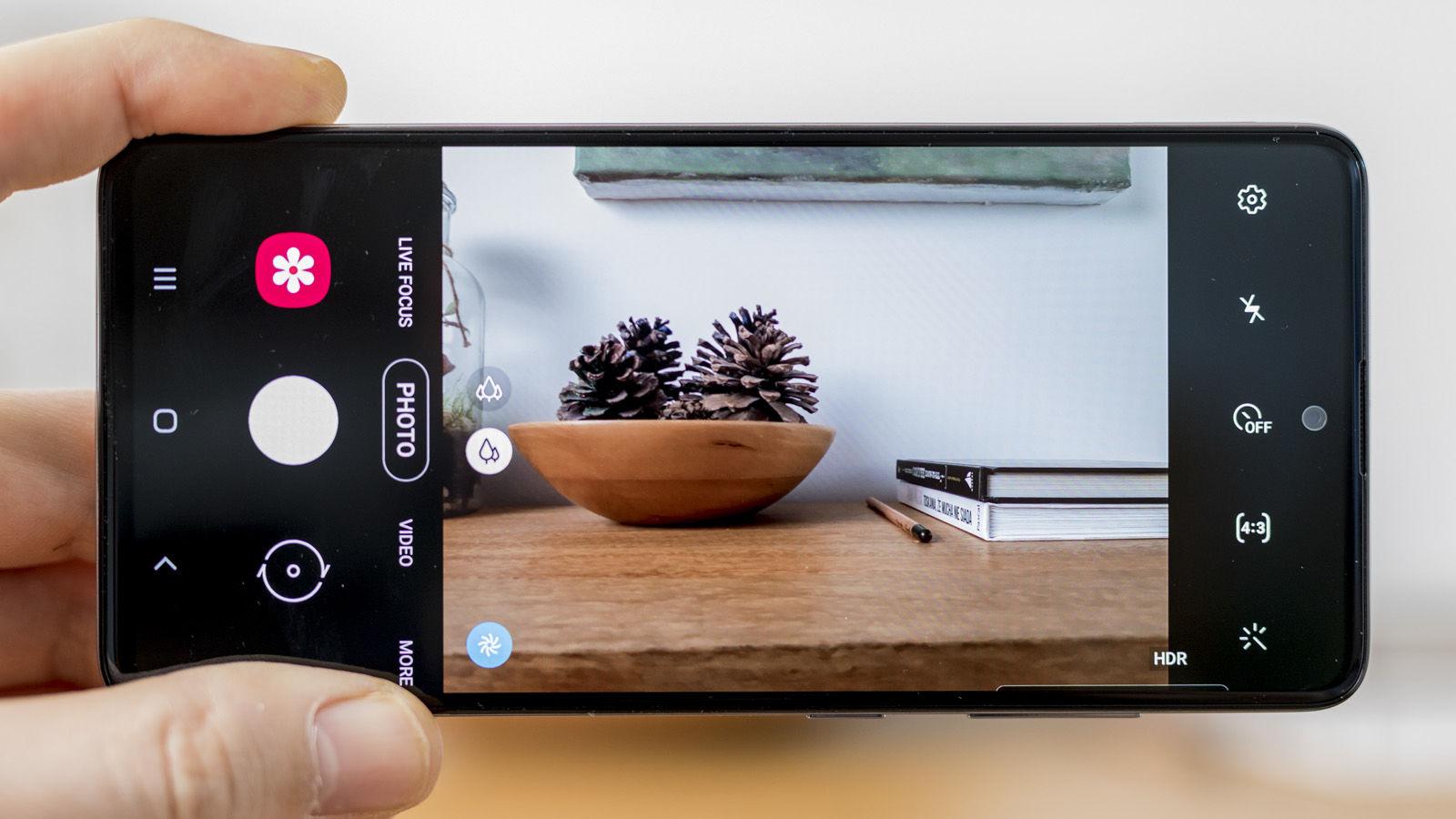 Image quality has been a priority for Samsung flagships for many years now, and the same can be said for its more affordable devices.

The A51 comes with four rear lenses, a frankly ridiculous array for a camera at this price point. The big omission is a telephoto lens, but I’d much rather have the wide angle if I had to choose between the two.

I’d consider myself an amateur photographer at best, which made the excellent shots I managed to get all the more surprising. While it’s true to say most of my testing was done in well-lit environments, the level of detail and dynamic range is brilliant.

Having the flexibility to cycle between standard, wide and macro lenses was superb, while I was pleasantly surprised by the dedicated food mode. The Live Focus portrait shots struggle a lot with edge detection, even if Samsung does allow you to adjust background blur after you take the shot.

The 32Mp selfie camera sounds impressive, but results are a significant step down. Like so many front-facing sensors, the level of detail in the subject is good but the background is often overexposed.

These flaws prove it can’t rival high-end handsets, but I think casual photographers will be very happy with the shots from the A51. I’d go as far to say that aside from the design, it’s my favourite aspect of this phone. 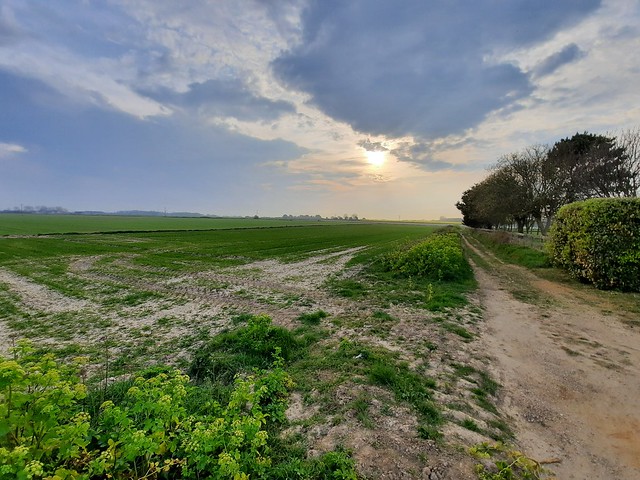 The A51 comes with a 4000mAh battery. Combined with the 1080p display, it gives solid but unspectacular battery life, lasting a full day of moderate usage but not much more.

However, it struggles on standby time, as has been the case with Samsung phones in the past. This is reflected in the below-average recording of 6 hours and 36 minutes in Geekbench 4’s battery test, which is considered a rough indicator of screen on time.

Given you’ll be reaching for the charger relatively often, it’s good to know that the 15W fast charger is included in the box. It’s also capable of Qi wireless charging, although that’s at a far slower 5W.

You can buy the Samsung Galaxy A51 direct from Samsung for £329. That’s the only version available in the UK, and will get you 4GB RAM and 128GB of storage. If you prefer, you can get the same configuration from Amazon for the cheaper price of £299.38.

Samsung has now released a 5G version of what proved to be the world’s bestselling Android phone in the first quarter of 2020. In addition to faster connectivity, the new A51 also offers a faster Exynos 980 processor, larger battery and slightly redesigned back. UK pricing is yet to be confirmed, but expect it to be noticeably more expensive than the regular model.

That puts it towards the lower end of the mid-range market. Rivals here include the Oppo Reno 2 and Google Pixel 3a, while it will have to do more to be considered among the best Samsung phones.

I believe this phone is priced pretty fairly, but there are too many drawbacks for it to be considered great value for money.

The A51 is a tricky phone to judge. On first impressions, the stunning design and great cameras make it a really exciting device. In good lighting, the latter produces regular and wide-angle shots that can rival handsets twice the price.

I also feel Samsung should have prioritised performance over emerging technologies such as the in-display fingerprint scanner, the latter proving to be a big letdown here.

Samsung fans probably won’t be disappointed if they buy this phone, but I was hoping for a more well-rounded handset from the world’s leading smartphone manufacturer.