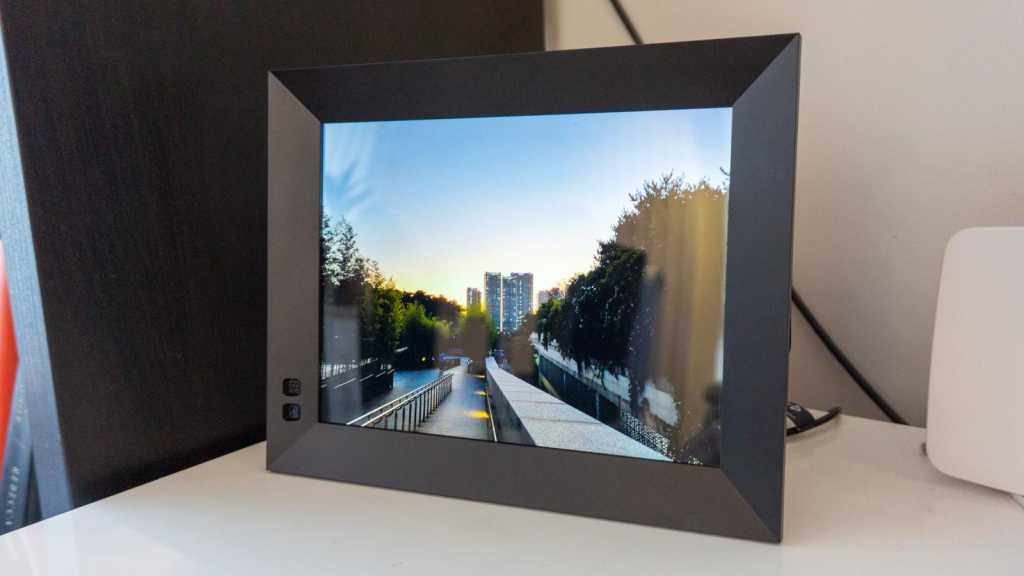 The 9.7in Smart Photo Frame is Nixplay’s best digital photo frame yet, finally pairing excellent display quality with software smarts. It’s simpler to use than a proper smart display once you’ve got past initial setup, and on the 9.7in model the display quality is unmatched for showing off your holiday snaps.

Dedicated digital photo frames have come into question a little in the wake of smart displays like the Google Home Hub or Echo Show. Why buy a screen that only shows photos, when you could buy one that does that and a whole lot more?

The Nixplay Smart Photo Frame can be read as a sort of answer to that question. Sure, it doesn’t have a built-in voice assistant, and you can’t use it to adjust your smart thermostat. But it’ll connect to the cloud to display your latest photos, it’ll make those photos look great, and it’ll do it all while remaining fundamentally easy to use.

The Smart Photo Frame series is designed to look like as much like a photo frame, and as little like a piece of tech, as possible.

The display is surrounded by boxy bezels, angled slightly to match the style of traditional frames. The matte black model I tested looks the most tech-y of the lot, but the glossy metal option looks much closer to a standard frame. The only thing to give it away are the two small squares that make up the motion detector, used if you want to set the screen to sleep when there’s no-one in the room.

There are four sizes available, with 9.7in, 10.1in, 13.3in, and 15.6in displays respectively, though the larger sizes only come in black.

Any size can be easily wall-mounted, or if you prefer can sit on a shelf with the power cable cleverly doubling as a flexible stand that lets you adjust the angle and orientation of the frame pretty easily.

The textured back is surprisingly attractive given that you’ll likely never see it, and also sports one of the frame’s best features: a magnetic spot for the included remote to attach to, so that you can safely tuck it out of sight without worrying you’ll forget where you’ve hidden it.

Display quality has long been my biggest issue with most digital frames, which typically include dim, low-resolution panels that never do photos justice.

That’s changed here. The 9.7in model I reviewed boasts a 2K IPS screen that’s bright enough to withstand direct sunlight and high resolution enough that you won’t lose detail from most of your shots.

Best of all is the matt finish, combined with impressive viewing angles, which means that at a glance your shots look like prints, adding to the illusion that this is a traditional frame. That’s something that current smart displays can’t match, with most offering decent resolution but never letting you forget that you’re just looking at a photo on screen.

Confusingly, aspect ratio varies between the sizes too. The smallest is in a relatively boxy 4:3, while the 10.1 uses a 16:10 panel and the 13.3 and 15.6 opt for an even thinner 16:9 ratio. If most of your photos are in one size or the other then this might affect your preferences, but there are various options for how to fit images to the frame in any case.

Software is another area where Nixplay has really stepped its game up. The Smart Photo Frame balances functionality and simplicity by combining simple, pared back on-device controls with powerful browser and app options to sync and manage your photos.

Unlike older models, there’s no option to access photos from a USB stick or SD card, so it’s cloud-only. When you set up the frame you’ll be asked to pair it with a Nixplay account, which you can manage through a web browser or the accompanying Android and iOS app.

You can upload photos through either, or connect your account to Google Photos, Facebook, Instagram, Flickr, Dropbox, or Verizon Cloud to sync photos and use them to populate playlists which you can send to your frame.

You can save multiple playlists on the frame, and as many photos as the 8GB of storage allows (bearing in mind that a bit of that space is already lost to the frame’s operating system).

If you use the Nixplay app it will also double as a remote, letting you queue up specific photos or playlists direct from your phone.

The frame itself lets you pick which photos or playlists to display, customise how images fill the screen and the transitions between them, and handle the Wi-Fi connection – and that’s about it. This smartly avoids any complex, confusing options on the frame and so makes it a great option for the technically challenged, as any friend or relative could handle the trickier bits of photo management remotely.

That side of things is mostly simple and user-friendly, beyond a confusing insistence on having both photo albums and photo playlists with little clear instruction on what the differences are (one is where you upload photos to, one is what you play them from, but it doesn’t even matter when you’re using the app rather than the browser, for… reasons?).

By contrast the 10in Google Nest Hub Max is £219/$229 and packs in lots of extra smart functionality, but at the price of lower display quality and the risk of confusing controls for those not used to high-tech assistants.

You can buy any of them direct from Nixplay, where there are some discounts for buying a few at once, or you’ll find them on Amazon too.

No, it doesn’t do as much as a Google or Amazon smart display – and yes, it costs more than those despite that fact. But it’s simpler to use than either once you’ve got past initial setup, and on the 9.7in model the display quality is unmatched for showing off your holiday snaps.

Just remember that the larger models use lower resolution screens, so there will be a drop in quality as you move up the sizes. The FHD 13.3in and 15.6in models should still make your photos look pretty good, but I’d steer clear of the lower resolution 10.1in variant – it’s cheaper, but you likely lose too much quality for that price.