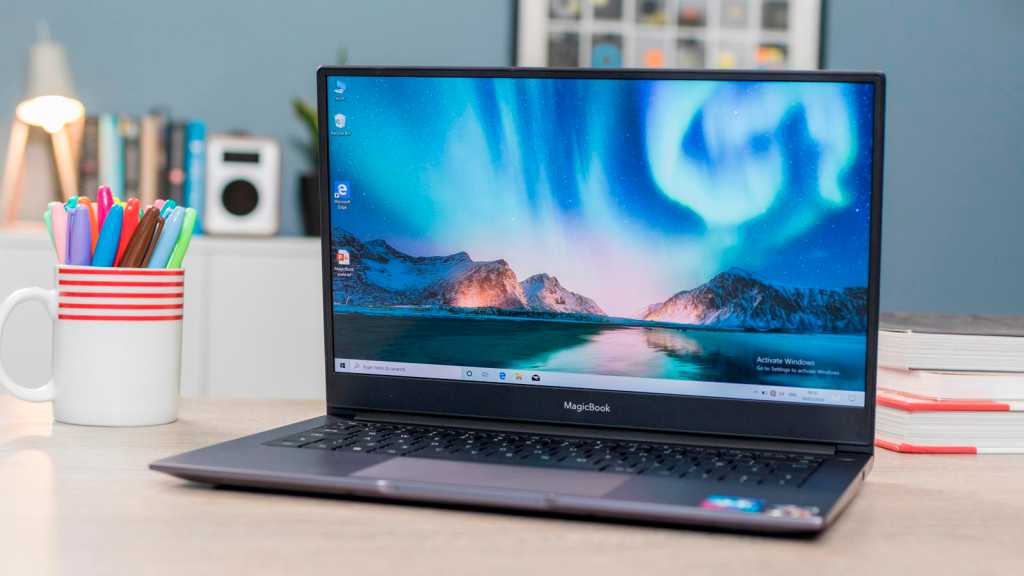 The Honor Magicbook 14 comes with an impressive sleek design, a large screen with slim bezels as well as robust performance – it’s hard to believe that this laptop is under £600.

Honor’s first UK laptop is finally here, and it’s a corker. With an expensive-looking design, an impressive battery life and interior specs suitable for everyday needs, this is one of the best options out there for a laptop under £600.

We spent some time with the Honor MagicBook 14 to see how it performs day-to-day.

Read on for our full review, or alternatively check out our roundup of the best laptops.

The 14-inch, 1080p IPS LCD display wastes no space, with slim bezels around the top and sides and an 84% screen-to-body ratio. The bottom is a bit more chunky, but not completely intrusive – you’ll barely notice it when watching videos. It’s not the brightest laptop out there, but unless you plan on working in bright sunlight all the time, it shouldn’t be a problem. If you’d rather a larger display, Honor also sells a 15in model with otherwise similar specs.

The exterior is made from alloy, and is finished in Mystic Silver or Space Grey, which is a touch purple-ish to me. It’s a much nicer finish than bog-standard matte black, and I’m a fan of it.

The edge of the laptop also comes with a blue chamfer, giving it a nice funky finish. That – and the logo – are basically the only distinguishable features between this laptop and Huawei’s MateBook D 14.

This is a light laptop, with a weight of around 1.38kg and a thickness of 15.9mm. It can easily slip in your bag with minimal fuss, so would be perfect for those who work in remote locations, or students who are looking for a device to take to lectures.

The key press is quite soft and spongy, not giving a huge amount of resistance. It’s also softly backlit, so you can see what you’re typing if you’re in a dark room. In addition, if you’re worried about your webcam turning on unexpectedly through hacking, then this isn’t a problem. The camera is hidden within the keyboard, centred between the F6 and F7 keys.

Though the privacy side is a bonus, this camera isn’t at all flattering as the angle sits directly looking up at your chin. In addition, whenever you type, your fingers take up most of the screen. It’s also only 1Mp, so don’t expect astounding quality for your zoom calls.

The laptop comes with a fingerprint sensor that you can use to unlock the device. However, I did find this to be a little temperamental. You still have the option to set a PIN or password otherwise, so this wasn’t a huge issue, but just something to keep in mind.

The audio quality isn’t anything groundbreaking, seeing as the speakers are on the bottom of the laptop. This is especially noticeable if you’re watching videos while sitting on your bed.

There’s an odd design option where the laptop screen can fold back 180 degrees – which isn’t something that is particularly useful for me.

In terms of the processor, the original MagicBook comes AMD’s Ryzen 5 3500U – though Honor has since added a more powerful Ryzen 5 4500U model with double the storage, which we’ve reviewed separately.

The MagicBook comes equipped with 8GB RAM, and 256GB of storage split across Windows and data drives – plenty for a selection of high-demand programmes or a couple of games.

Honor hasn’t skimped on ports either, with one USB-C, two USB-A, a headphone jack and one HDMI. The latter is often left off mid-range laptops, so it’s nice to have that option.

The MagicBook 14 comes with a 56Wh battery, which I found to last more or less a full day running numerous programmes and watching videos in one sitting. This is also backed up by our battery test, with the MagicBook managing 10 hours and 43 minutes. Charging via USB-C, you’ll only need around 90 minutes to go from flat to full.

This obviously isn’t a dedicated gaming laptop, but thanks to the integrated Radeon Vega 8 graphics, I still managed to run games such as Planet Zoo on this device with minimal lag. Granted it wasn’t on the highest graphics settings, but it was still of reasonably good quality. The fan system also did a good job of stopping the laptop from overheating, and didn’t sound like a plane taking off like on other laptops.

You can take a look at how the MagicBook compares to other rivals within a similar price bracket in our benchmark tests below:

You can get the Honor MagicBook 14 for £549 directly from Honor, with the faster processor variant costing £669. In the UK, it’s also available from Amazon UK, John Lewis and Laptops Direct. You unfortunately can’t get it in the US.

When it comes to benchmark scores and battery tests, this laptop can actually stand against rivals that are over £200 more, such as the HP Envy 13 (2019). This goes to prove just how much you’re getting for your money with the MagicBook 14.

Another thing worth noting is that the Matebook D from Huawei is practically identical in terms of specs – the only differences are the small design choices on the exterior.

However, the Matebook D has an RRP of £649.99 – though you can get it for around £600 at the time of writing. Either way, the MagicBook gets you the same kit, but for a much cheaper price. So if you’re not bothered about having a brand that’s a little less well-known, the Honor MagicBook is clearly the better choice for saving some cash.

When it comes to value for money, you can’t beat the Honor MagicBook 14. You’re getting a high-end looking laptop with great storage options without having to pay a premium price.

The display is great for watching videos on, the processor can run some powerful programmes and games, and the lightweight size means it’s perfect for porting around wherever you need. All in all, if you’re looking for a versatile laptop for work or study, then this is a great option.