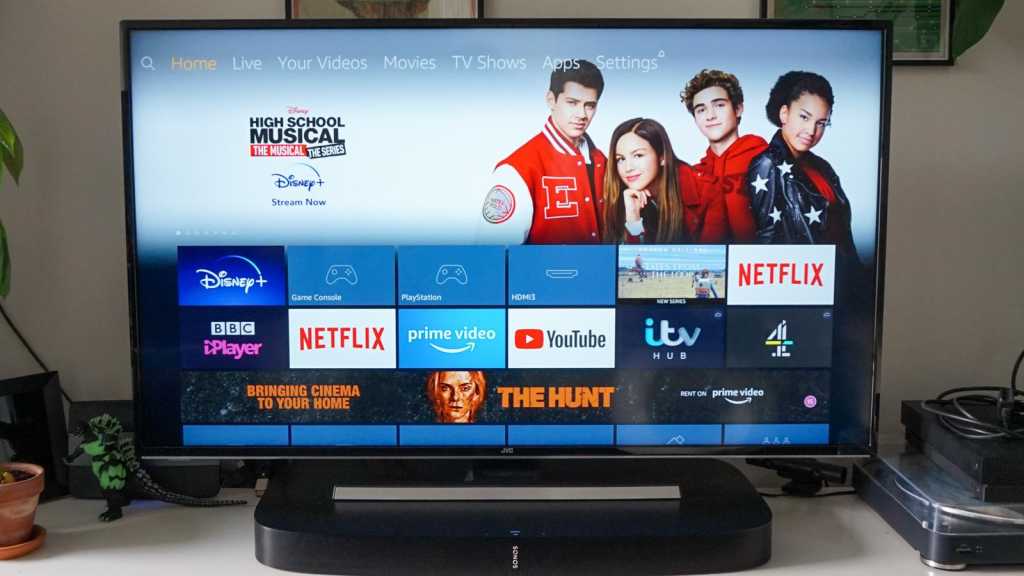 Strong specs for the price mean that the JVC Fire Edition TV offers tremendous value for money, especially on the 49in model – the sweet spot for specs, size, and price. The only real disappointment is that the software side has its limitations – it’s better than most TV software by miles, but the cluttered interface and laggy performance hold it back from perfection. Still, what other TV comes with built-in Alexa?

After a few generations of Fire TV streaming sticks and media boxes Amazon is finally packing its Fire TV operating system into, well, TVs. The first for the UK have been made in partnership with JVC, and offer a seriously compelling option for a budget smart 4K TV.

Simple hardware design is paired with a simple, easy-to-use operating system and some surprisingly strong specs for a range of TVs that starts from just £299, leaving little reason for most people to spend much more.

There’s not a huge amount to say about the design of the three JVC Fire TV Editions, though that’s no bad thing. Each of the three sizes – 40in, 49in, and 55in – has a fairly slim black bezel around the display, with a small JVC logo at the bottom.

The stand is central – meaning you don’t have to worry about fitting the TV into spaces limited by width – and on the 49in model I reviewed it doesn’t add too much to the depth of the whole TV. It’s sturdy and solid though, so feels like it should be pretty reliable, and only took a few minutes to assemble.

On the back you’ll find most of the ports clustered together. It’s a decent array, with four HDMI ports (one with ARC support), composite, two USB-A ports, and both optical audio and a 3.5mm jack for headphones or speakers. Most of those ports sit together on one panel, but the USBs, 3.5mm jack, and one of the HDMIs are side-mounted for a little extra flexibility in wiring things together.

You’re probably unlikely to move the TV too often, but if you do need to – or want to wall-mount it – it’s fairly lightweight. The smallest model weighs just 7.2kg including the stand, while the largest is double that at 14.4kg, and all three are compatible with VESA mounts.

As for the remote, this is essentially an extended version of the familiar Amazon Fire TV remote. It remains compact and slim, but fits in dedicated buttons for Amazon Prime Video, Netflix, Live TV, and the OS’s main app page. More excitingly, a built-in microphone means you can hold a button to begin using voice search or issue commands to the Amazon voice assistant Alexa – more on that later.

When you’re spending £300 on a TV you probably shouldn’t expect the world in terms of picture quality, but the Fire TV Edition delivers more oomph than you might expect.

First a disclaimer: the smaller 40in model has a slightly downgraded display compared to the 49in and 55in versions. Since I’ve reviewed the 49in model, my thoughts on quality are based on using that slightly upgraded version.

All three TVs are 4K and support HDR to the Dolby Vision, HDR10, and HLG standards, and they’re also all backlit LED.

The larger models are brighter (350 nits peak brightness vs 270 nits) and deliver better contrast (6000:1 contrast ratio vs 4000:1), so they’ll deliver deeper blacks and offer a better viewing experience in bright conditions – so if your TV room gets a lot of sunlight that would be an extra reason to jump up from the 40in model if you have the space and budget.

Picture quality is great on 4K and HDR sources, even when streaming at the lower bitrates we’re all having to get used to during lockdown. Images look sharp without feeling over-processed, and the colour range delivered by the HDR is consistently impressive. The upscaling is solid too, giving HD and non-HDR content enough extra sheen to work on the high-res display.

Of course, this won’t match the quality of more expensive TVs. It’s not OLED, for one, so there’s a limit to how deep the blacks are capable of getting, and even the brighter 49in model struggles in direct sunlight, and doesn’t hit the sort of peak brightness you need to really get the most out of the HDR features, which is usually 600 nits+.

But you’d have to spend a lot more to see material quality improvements, and what you’re getting for the money here is honestly pretty astounding.

I’ll be honest: one of the best benefits of buying a TV at this price should be that you’ll hopefully then be able to afford to pair it with a soundbar or some other speaker set-up, because TV speakers almost universally suck.

The same is really true here, though if a soundbar isn’t an option this will get you by. With either 16W or 20W drivers, depending on size again, there’s a respectable amount of sheer audio power here, along with some basic EQ settings and welcome support for Dolby Audio, along with options to enhance dialogue volume or compress audio into a tighter volume range – ideal for when you need to watch with the volume turned down late at night.

Other than the display itself, this is the real meat of the Fire TV Edition: the fact that it runs Fire TV.

If you’ve owned any of Amazon’s other Fire TV streamers then the software will instantly feel familiar, with a simple interface made up of rows of different apps, shows, films, and input options.

There’s a mix of genuinely useful recommendations and more irritating ad-driven stuff – the row of ‘Sponsored’ apps given prominent placement on the homescreen is a bit much – but it is at least easy to navigate, though probably a little over-cluttered on the home screen.

There’s support for a huge range of apps – including Amazon’s two biggest rivals in Netflix and YouTube – and even new providers like Disney+ are represented. The biggest omission is really Now TV, but otherwise you should be able to access just about every video streaming service you’d like to.

A separate tab handles live TV options, along with extra tabs specifically for movies and TV shows – though these are less useful than you might expect, limited as they are to content pulled from Amazon Prime and any Prime Channels you’re subscribed to – you won’t see anything from Netflix or iPlayer in here.

Other options include some basic games – including a surprisingly strong retro Sega collection – and basic radio and music offerings. TV-specific extras include the option to name your various input sources, though frustratingly this is from a set list rather than an open text field – so for example my Nintendo Switch has to go in as the generic ‘Game Console’ even while my PS4 is labelled ‘PlayStation’.

Then there’s Alexa. The microphone integrated into the remote gives you direct access to Alexa, so that you can essentially use the TV as an extra smart home hub or smart speaker, so long as you don’t mind grabbing the remote to use it each time – a real benefit if you’re already in the Amazon ecosystem.

There’s also the option to use voice search, which is a handy way to quickly get to specific shows. It won’t cover every app, sadly, so it’ll quickly take you to an Amazon or Netflix show, but won’t open up iPlayer to find Killing Eve for example. Still, it’s a handy bit of functionality that should save you some awkward TV keyboard typing at least some of the time.

If there’s a major problem with the software it’s just that it’s a bit sluggish. There’s noticeable lag when navigating the operating system, especially right after you turn the TV on, which feels out of step with the focus on smart features.

I also experienced a couple of odd errors, like stuttering that crept into everything I watched, fixed by rebooting the system – likely the result of the RAM filling up. It’s not the end of the world, but it’s not the sort of problem you expect to have to deal with from your TV.

Still, for all those flaws, it’s hard not to appreciate the Fire TV Edition when you remind yourself of the price tag.

The obvious rival at this price is the Hisense Roku range, which costs a little less (starting from £249) though drops a few of the display and audio specs to hit that lower price – and you won’t get support for Alexa or voice controls. Otherwise, to hit a comparable blend of 4K HDR video and sophisticated smart features you’d usually have to pay a fair whack more than this, so the value for money is impossible to dispute. Check out the rest of our reviews of the best TVs if you’re not convinced.

Strong specs for the price mean that the JVC Fire Edition TV offers tremendous value for money, especially on the 49in model – the sweet spot for specs, size, and price, and well worth the £50 upgrade from the 40in base size thanks to a spec boost beyond the screen size.

The only real disappointment is that the software side has its limitations – it’s better than most TV software by miles, but the cluttered interface and laggy performance hold it back from perfection. Still, what other TV comes with built-in Alexa?