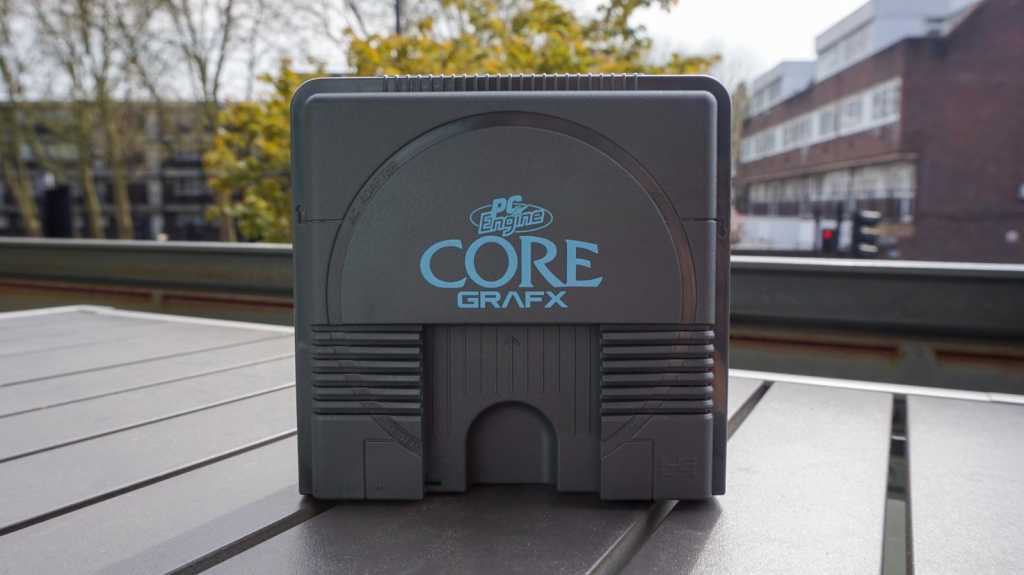 At almost £100/$100 the PC Engine Mini – or TurboGrafx-16 Mini for the Americans among us – is a tough sell for anyone that didn’t own the original, but if you’ve got enough nostalgia then it will be rewarded.

I never owned a PC Engine, and in all honesty I’m not sure I’d ever even heard of it before Konami announced it was working on a mini, USB-powered retro version to rival the likes of the NES Classic and Mega Drive Mini.

That means I’ve approached playing this modern take – releasing in Europe in its CoreGrafx variant – without a hint of nostalgia, beyond what I’ve got for the few big-name, multi-platform games included in the collection here.

It also means I had to educate myself on the chequered history of the console itself. There’s the fact that it was the PC Engine in Japan and the TurboGrafx-16 in the US, while Europe got a half-arsed release that mostly left PC Engine editions kicking around through unofficial channels.

Konami had nothing to do with the original console, but years ago the publisher acquired original hardware developer Hudson Soft, giving it the rights to put this set together. Since Konami hasn’t touched hardware in a while, it partnered with renowned accessory company Hori for the physical bits. 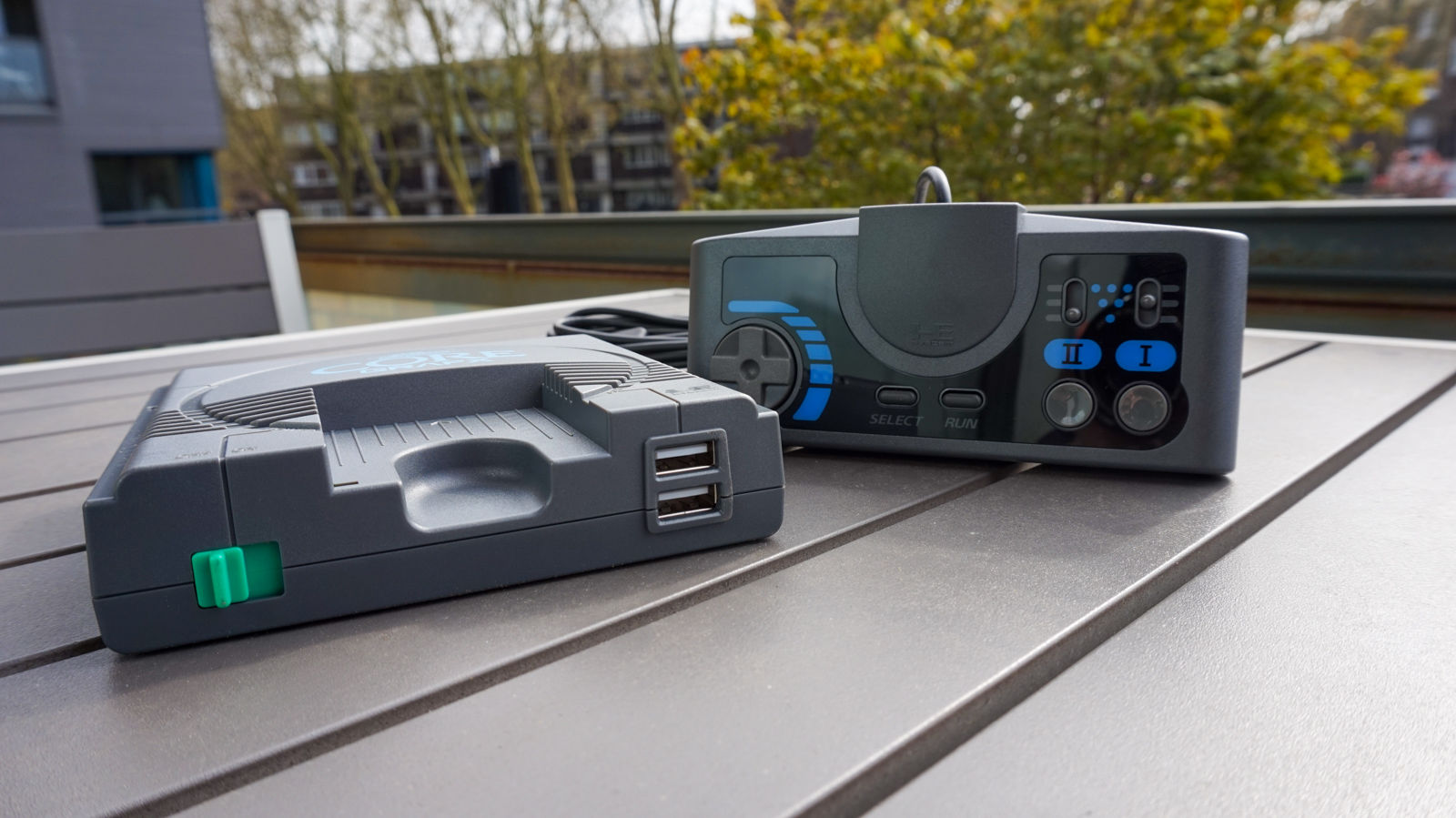 If you’ve seen any of Nintendo, Sony, or Sega’s recent efforts with retro consoles then you should have an idea of what to expect from the PC Engine Mini.

It’s a lightweight hunk of plastic that basically looks the spitting image of the original, but smaller. Surprisingly it’s only 10 percent smaller, but that’s more a reflection of the scale of the original hardware than anything about this iteration – it’s still a dinky little piece of hardware, and light enough to give away that there’s not much more than an Arduino inside.

There’s a simple chunky green power button on the front, along with two USB-A ports for controllers, while the back hides the Micro-USB port used for power and an HDMI socket (cable included). There’s no fake cartridge socket, as on Sega’s Mega Drive/Genesis rehash, but otherwise Konami and Hori have done their best to recreate the original intact.

That comes down to colour schemes and design variants too. Europe’s CoreGrafx version is a dark grey reskin of the Japanese white-and-red PC Engine, while the US gets the all-black TurboGrafx-16 in a bigger, wider, American-size chassis. 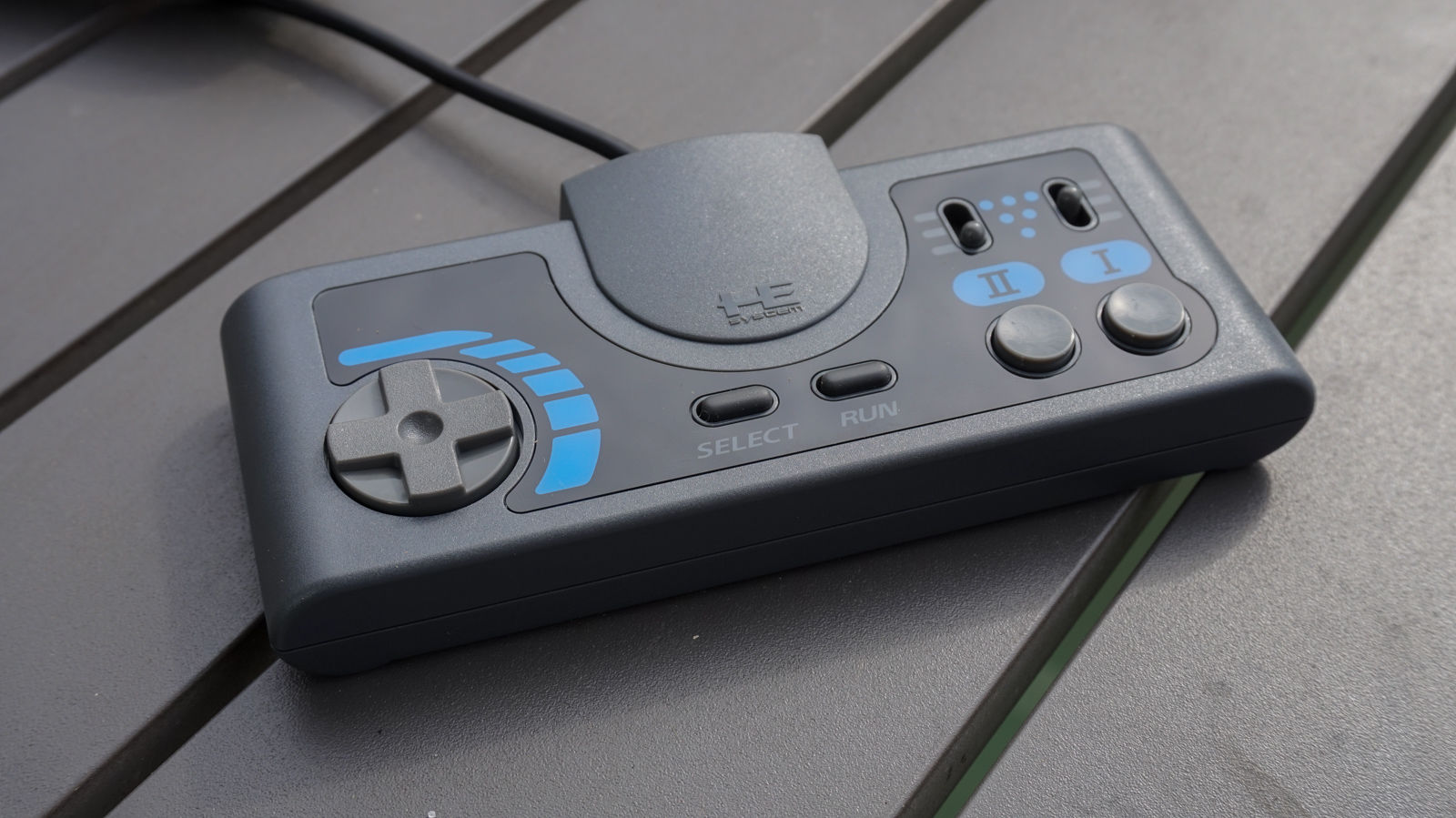 Then there’s the controller. You get one in the box (with a reassuringly lengthy cord), and new pads cost £22/$25. The base console supports up to two pads, but grab the extra Turbo Tap accessory and you can have up to five players in compatible games. Since controllers connect over USB you can plug any old USB gamepad in, though of course compatibility may vary – and you might miss out on the gamepad’s best feature: the turbo speed sliders.

You can independently set each of the two face buttons to one of three settings, which changes how inputs are registered and actually opens up different attack and input actions in certain games, in effect giving you extra buttons. Otherwise it’s just a D-pad and Select and Run buttons on the simple pad – which is full-size, unlike the console itself, and feels pretty well put together.

The polite way to describe the PC Engine Mini’s game library is that it’s a great way to educate yourself on some retro titles you might not have played – or even heard of – before. 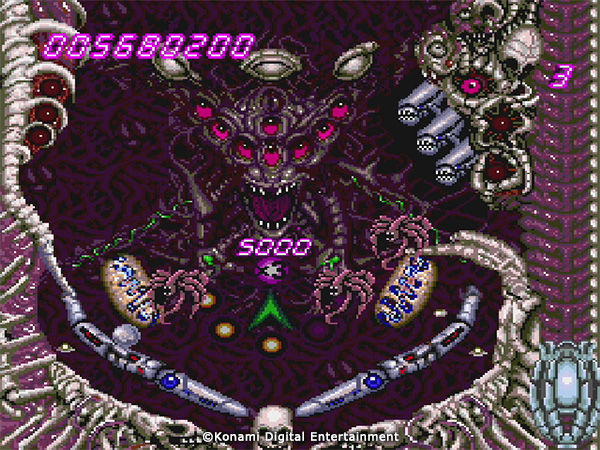 Games are split between into two sections, accessed separately. The default are the TurboGrafx-16 games: 25 games that saw American releases, including the likes of Splatterhouse, Blazing Lazers, and Neutopia I and II.

Then there are 32 PC Engine games presented in their Japanese versions (including a few duplicates, available in both languages). The highlights here are probably Castlevania: Rondo of Blood and Hideo Kojima’s Snatcher, but unless you can read Japanese the latter is likely to be a mystifying experience. 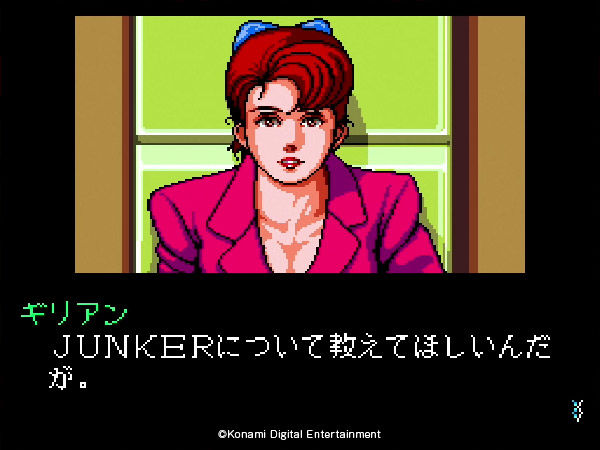 For the most part Konami has prioritised games that can be played despite the language barrier, but the localisation process has produced other quirks – for example the inclusion of an English-language Bomberman ‘93 and a Japanese-only Bomberman ‘94.

Taken as a whole the lineup is ‘shmup-heavy – R-Type is joined Gradius, Super Star Soldier, Galaga, Space Harrier, and more – though early JRPG and platformer fans are also pretty well-served. You’d be hard-pressed to call this a set of stone-cold classics, but the upside is that there’s a lot to discover here, including plenty that never officially made its way to western shores – meaning at least it’s a more interesting lineup than the mid-’90s dregs of the PlayStation Classic.

It’s also been assembled with an array of careful touches that will reward the nostalgic. The UI tells you whether each game first launched on cartridge, CD, or any other niche format, and you can play it display formats from one-to-one pixel reproduction up to embedding the screen inside a frame of the portable PC Engine GT (yet another variant!). There’s even a CRT filter that throws in some extra scan lines for good measure. 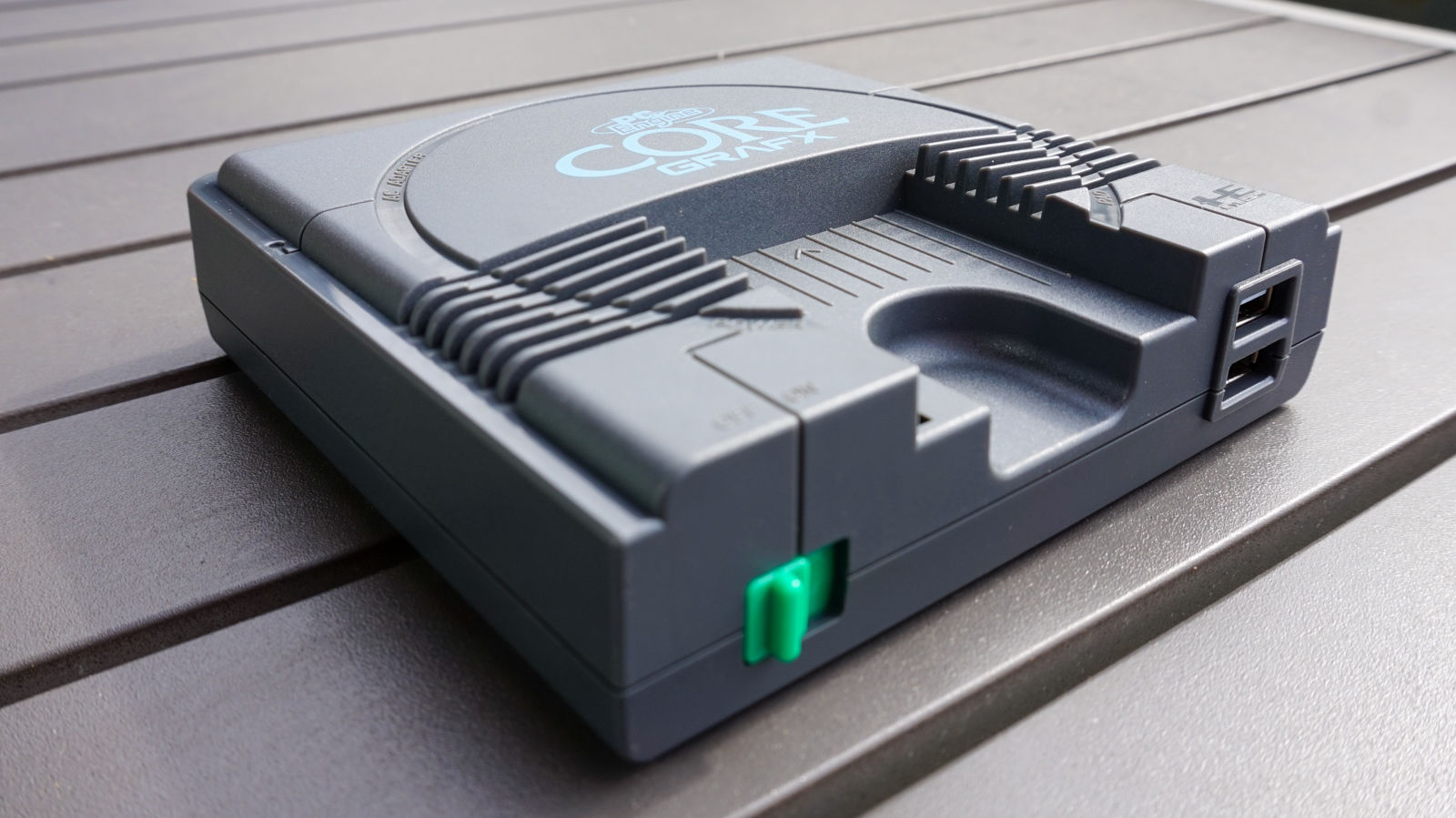 Price – For the fans

If there’s a real problem with the PC Engine CoreGrafx Mini, it’s not the wobbly game lineup – it’s how much you’ll have to pay to get at it.

At £99/ $99 this costs even more than Sony tried to get away with for the PlayStation Classic, and costs half again what you could get a SNES Classic or Mega Drive Mini for. If it boasted a game lineup that blew either away – or just threw in a second controller – this might be understandable, but for what you’re getting it’s hard to justify the steep price tag.

It’s also available exclusively through Amazon worldwide, so there won’t be much market competition to drive prices down – so anyone holding out for a discount will just have to hope Amazon knocks a few quid off on its own.

At almost £100/$100 the PC Engine Mini – or TurboGrafx-16 Mini for the Americans among us – is a tough sell for anyone that didn’t own the original.

If you’ve got enough nostalgia then it will be rewarded, as this is undeniably a labour of love, packed with enough clever touches and little details to make fans smile. For the rest of us this is just too much money for a console where fewer than half the games are in English, and you’re only likely to have heard of a handful of them anyway.