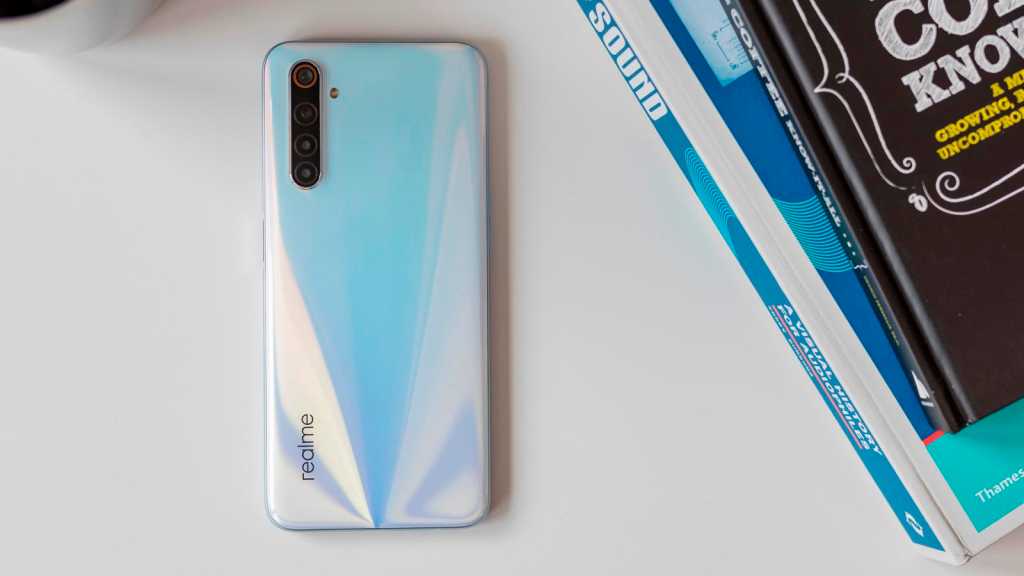 With only minor niggles, the Realme 6 is easily one of the best budget phones you can buy in 2020 offering attractive design, quad rear cameras and smooth performance. Not to mention this is the cheapest phone you can buy with a 90Hz display.

Realme is starting to make a name for itself across Europe and its latest smartphone could be one of the best budget handsets of 2020. Here we review the Realme 6, which has a somewhat ridiculous set of specs and features for the asking price.

We actually received our review samples for the Realme 6 range before the UK price was announced. When it was, I was somewhat blown away having expected it to be a fair bit more expensive due to the kind of specs you get.

Namely, this affordable smartphone is the cheapest you can buy with a 90Hz screen (at the time of writing) and it also has no less than five cameras. There’s also a Realme 6i that’s even cheaper and the 6 Pro is for those wanting things like better photography options. Here we compare the Realme 6i vs 6 vs 6 Pro.

The likes of Motorola have dominated the budget space for years but that might be about to change thanks to Realme. This is like the Oppo A9 2020, but better.

We didn’t think we would see a 90Hz screen on a phone this cheap so soon. The tech has been almost exclusively at the flagship end of the market but Realme has trickled it down to budget handsets extremely quickly.

If this is new to you, it’s the refresh rate of the display and is 50% higher than the typical offering of 60Hz. The result is a more responsive and fluid experience when using the phone, especially when scrolling.

In the settings you can choose between 60-, 90Hz and Auto Select which will choose which is best depending on what app you’re using.

That refresh rate is the main headline here but the screen is decent in other ways too. It’s a large 6.5in in size and has a Full HD+ resolution and uses IPS LCD tech.

Ok, it’s not OLED but this display doesn’t look bad by any stretch of the imagination. Quite the opposite with pleasant balance of colour, brightness and sharpness. The 90Hz refresh rate is the wow factor here though.

It’s common for budget smartphones to have dual or sometimes even triple rear cameras, but Realme offers a quad rear camera array on the 6. That’s more than many flagship phones that are three or even four times the price.

Here’s a quick rundown of what you get:

Starting with the main camera, since you’ll use this most of the time, it actually shoots in 16Mp by combining four pixels into one. However, you can select ‘64M’ from the camera app to shoot in full resolution if you like.

You can try it, but overall there’s little to gain and you’ll have to store images over 20MB a piece if you do – so only use it in order to zoom/crop in. In the regular 16Mp mode, images have plenty of detail, nicely accurate colour and there’s not much noise to be seen either.

Give the Chroma Boost mode a try for more pop but I personally prefer the results from regular shooting. The weakness here is low light, but the night mode improves images in a number of ways so they are usable. They are some of the best night shots I’ve seen from a budget phone.

I’m also impressed with the portrait mode which uses the main sensor in conjunction with the 2Mp Portrait lens. Realme says this also enhances the contrast on top of depth sensing.

Onto the ultrawide angle option and this too is pretty decent with lively colour and excellent contrast. It’s not the best results I’ve ever seen but the setup has been causing me to forget this is a budget phone.

The macro option is the weakest here and although it means you can get really close into subjects, the sensor is only 2Mp and there’s not much detail. It’s also just quite tricky, as I’ve found with other macro lenses, to hold the phone at the right distance. Most of the time, you’ll be better off just using the main camera from slightly further back.

For selfies you’ve got a 16Mp embedded in the screen and it includes HDR, a night mode and beauty enhancements if you want them. Selgfies are pretty good and although it has a portrait mode, results here are mixed.

To touch on video, the Realme 6 can shoot in up to 4K at 30fps or you can get 60fps at 1080p. Results vary and although colours are good, I expected more detail. There’s also no optical image stabilisation and you only get electronic stabilisation when shooting at 1080p and 30fps.

Photography is an area where you might want to opt for the Realme 6 Pro. It’s got a telephoto lens at the back and a second ultrawide camera at the front.

You might think the Realme 6 is going to suffer in this area compared to its Pro big brother, but the Mediatek Helio G90T processor here is perfectly good. In fact, in our benchmarks there’s effectively no difference between it and the Qualcomm Snapdragon 720G found in the Pro. In fact, the MediaTek scored better in Geekbench 4.

The only slight odd thing here is that the Realme 6 starts at 4GB of RAM and 64GB of storage. That’s half the amount of storage compared to the 6i which is £30 cheaper.

Still you can opt for a 128GB with 4- or even 8GB of RAM. I tested the latter and performance is very smooth, aided by that 90Hz refresh rate.

You can see our scores below and how the Realme 6 outpaces the Moto G8 Power, Honor 9X Pro and Pixel 3a and keeps up with the likes of the Huawei P40 Lite (with the latter scores via GSMArena).

The Realme 6 might be a little chunky (see below) but at least this is partly down to a decent sized battery. It’s well above average at 4300mAh capacity.

It lasted a middling seven hour and 15 minutes in our Geekbench 4 test but real world usage proved to be good. How long it will last you, as usual, will depend on your personal usage and whether you use 90Hz all the time.

I was using the 6 on 90Hz and with fairly light usage (I’m on a laptop most of the day with little need to rinse a phone) it can get through a day with no problem and often a second. Overall, I’d describe battery life as solid.

It’s also impressive that Realme offers speedy 30W ‘Flash Charge’ charging here and the matching charger comes in the box. No wireless charging, of course, but when you can get the phone from dead to a whopping 68% in 30 mins over USB-C it doesn’t really matter too much.

Smartphone design has hit something of a ceiling these days and if it’s not a folding phone, the whole market pretty much looks the same. Maybe I have something of a skewed opinion on that dealing with so many phones on a regular basis.

Regardless, the Realme 6 is a pretty stylish smartphone with the look and feel of a device typically double the price.

It certainly looks the part at the front with its front camera embedded into a punch-hole notch, curved corners on the display and a decent screen-to-body ratio – although I’m not convinced by the touted 90.5% when you look at the chin below the screen.

At the back the Realme 6 has a striking look with a pattern that comes to life as you move the phone around. It’s a ‘V’ shape which I think looks better than the stripes of the 6i and lightning bolt of the 6 Pro.

This model is available in Comet White and Comet Blue.

I really can’t complain much at this price, but the device is a little on the chunky side of things so weighs a hefty 191g and isn’t particularly thin either (even without the camera bump).

Still it does include a headphone jack, construction feels solid and I love having the fingerprint scanner embedded in the power button on the side. It’s a particularly speedy scanner, too.

Note that it’s only splash resistant so don’t go dunking it in the bath or similar.

A common theme when reviewing phones from brands like Realme is that software is a huge let down and a big reason to get a rival.

While I’m not a huge fan of the Realme UI here (based on Android 10) it’s nowhere near as bad as some of the interfaces I’ve seen in my time. It’s actually quite close to stock and keeps things pretty clean and simple.

Sure, some of the icons look a bit overly colourful and therefore childish, there are some pre-installed apps like Opera I don’t want and I didn’t find myself using the Smart Assistant to the left of the homescreen but these are minor points.

Out of the box, the likes of Motorola and Nokia have better software but at the end of the day, you can easily install a different launcher if you like.

You might have done a double take when spotting the price of the Realme 6 at the top of this page. I did a *shocked emoji* face while watching the launch live stream.

Getting this phone for £219 seems like a mistake. Perhaps Realme is shrinking its profit margin to hit headlines and make a name for itself in a similar way to OnePlus when it first made waves.

Whatever the case, you’re getting a lot of phone for not much money. There are three models to choose from but even at the top-end, you’re still getting a decent amount of change from £300. Phones don’t really get better value than this.

You can buy the Realme 6 direct from the official store or from Amazon.

When you’ve been reviewing smartphones for almost 10 years, being gobsmacked is pretty rare. However, Realme has pulled it off with the 6.

This is an insane amount of phone for the money and it’s frankly quite ridiculous that you can get a 90Hz screen, quad rear cameras, 30W fast charging and more for just over £200.

Sure, there’s the odd niggle here and there but these are largely balanced out such as the large battery being the reason behind the hefty weight.

I also found myself comparing it to various flagship phones while testing simply due to the specs on offer, forgetting about the price.

The bottom line is that this is an outstandingly good value phone and easily one of the best in the budget market right now.