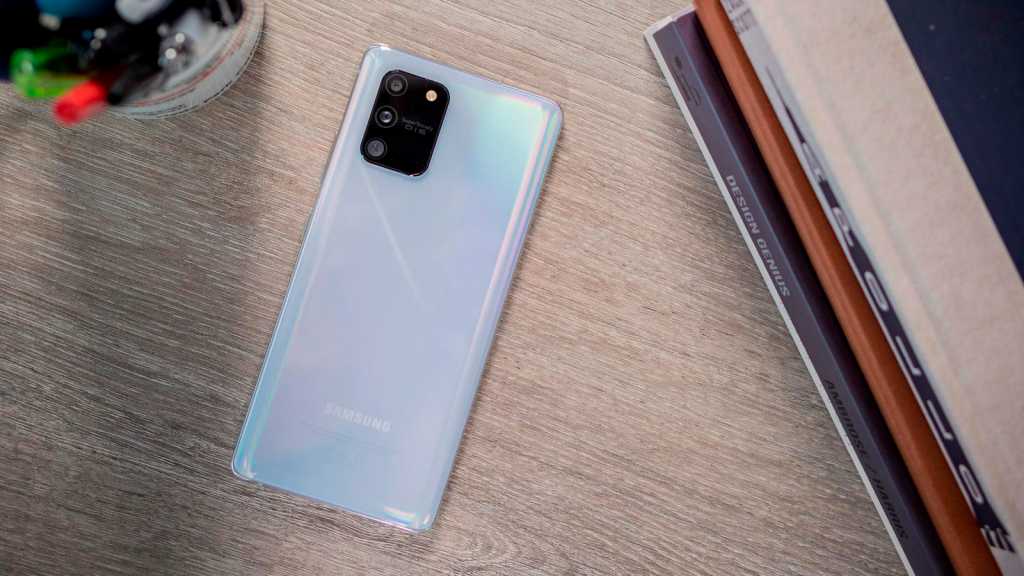 The Galaxy S10 Lite is an odd phone, but mostly in its name. It fits more closely with the S20 range and there’s actually not much ‘Lite’ about it at all. Overall, it ticks most of the boxes for those looking for an affordable Samsung flagship.

Mini or compact phones are long gone, so now your best way of getting a more affordable version of a flagship smartphone is to get the Lite model. Here we have the Galaxy S10 Lite, although in many ways it’s more like an S20 Lite.

Samsung says “The most iconic Galaxy experiences, now made more accessible to you” and, for a change, this marketing slogan sums the S10 Lite up pretty well.

It’s quite confusing considering Samsung launched a Galaxy S10e, but this is sort of an upgraded version of that handset, improving in key areas such as cameras and battery life.

Overall, there’s not much that’s here to warrant the ‘Lite’ name apart from the lack of wireless charging, a headphone jack and waterproofing. Otherwise, it has an excellent set of specs, features and pretty solid design.

Although the S10 Lite is part of the S10 family, it was launched far far closer to the Galaxy S20 range thanks to its somewhat surprise announcement at CES 2020. So we’re reviewing it around a year after the first S10 range.

The timing might have something to do with the way it looks more like a Galaxy S20. For a second, I thought the wrong phone had made its way into the box.

It perhaps feels like Samsung should have saved it as an S20 model, but that’s a moot point now.

It’s the oblong camera module on the back that particularly gives it an S20 style. It sticks out a little bit but I didn’t find it too much of a bother but you might if you hold phones in landscape with two hands a lot.

You get the kind of Samsung style and build-quality we’ve come to expect over the years. It might be cheaper than many of the firm’s other high-end phones but it doesn’t feel a whole lot less premium.

This is despite having a plastic rear cover instead of glass. You might not even notice since it looks pretty similar and is still very slippery.

One of my main quibbles about the phone is that it’s somewhat on the chunky side of things – 8.1mm thick which isn’t too bad, but 186g is heavy. It’s more the overall size of the phone, but this is a market trend.

It’s a shame that there’s room for a headphone jack but there’s not one to be seen. Samsung does provide USB-C headphones, though.

Bezels are more pronounced than Samsung’s flagship phones but this is acceptable here and they are by no means too chunky. You don’t, however, get any waterproofing here.

Our sample comes in the Prism White colour with its pearlescent finish, but you can also get the S10 Lite in Prism Blue and Prism Black.

The S10 Lite isn’t so light in a physical sense partly due to its huge 6.7in display. That’s quite a bit bigger than the 5.8in available on the S10e so if, like me, you’re not so keen on these giants then this might not be the right phone for you.

If you are ok with the size, this is a stunning screen and easily one of the best you’ll find around this price.

This is a Super AMOLED Plus display with popping colours and the screen-to-body ratio is almost the same as the regular S10. Note that it doesn’t have curved sides but you can still use Edge Panels.

A Full HD+ resolution is a reasonable thing to drop to but the display is still suitably crisp (394ppi) and supports HDR10+ as well as always-on features.

I’m not the biggest fan of punch-hole cameras (or whatever name you prefer for them) but at least the S10 Lite has the camera in the center like the Galaxy Note 10 rather than the corner.

The last thing to mention about the display is that it has an embedded fingerprint scanner. It’s optical rather than ultrasonic but I’ve found it works perfectly well the vast majority of the time, as long as you can guess where it is correctly when the screen is off.

Samsung says the S10 Lite has ‘pro-grade’ cameras and has a triple set on the back with a single selfie camera in that aforementioned punch-hole notch.

Here’s a quick run down of the four cameras:

That’s a pretty sweet line-up for a Lite phone and doesn’t really show much sign of Samsung cutting costs. Ok you don’t get the adjustable aperture of the S10 but I don’t think that’s a huge deal really.

The main thing missing when compared to so many new phones being launched is some sort of telephoto lens. I’m not fussed by this trend and find a macro option far more appealing but if you want to get zooming then look elsewhere.

As is pretty typical for a premium Samsung phone, camera performance is strong across the board. An afternoon wandering around Nottingham resulted in some nice shots with the camera app doing the vast majority of the work.

It’s easy to use and you can quickly switch between the main and ultrawide cameras when needed. Macro, however, is a little hidden away under ‘more’ which seems odd considering it’s one of the three main features.

I found the autofocus of the main camera quick and effective and across this sensor and the ultrawide option there’s plenty of details, good exposure and colours aren’t quite as mad as Samsung often does. Note that the 48Mp main camera processes down to a 12Mp resulting image.

It’s also capable of taking usable shots in low light. Just bear in mind that you can get some distortion when using the ultrawide lens.

The macro lens can take some decent shots but it’s a little hard to use – as you can see from my multiple efforts to capture a dinosaur coat hook at Neon Raptor’s taproom (and not due to too many beers!). The fixed focus means you’ll need to hold the phone around 3-5cm from the subject.

At the front, the 32Mp can take crisp selfies and features Live Focus for a blurred background. Despite the camera being placed centrally I found that holding the phone straight on results in a slightly off centre angle so had to tilt it off to my left to get the framing correct.

I’ve not seen other reviews make the same complaint so it could simply a defect in the way the selfie camera has been fitted inside my sample. This camera also has a wide option but it’s not a second lens, the phone is merely cropping for the regular view.

On the video front, the S10 Lite is very capable with the ability to shoot Ultra HD 4K video at 60fps as well as 240fps slow motion at 1080p. These combined with the Super Steady OIS means you can capture some impressive footage.

You might think an easy way for Samsung to keep the price of the S10 Lite down is to get a mid-range processor and other more affordable components.

However, this phone has a powerful Qualcomm Snapdragon 855 chip and although Samsung lists either 6- or 8GB of RAM, all the UK listings we can see have the latter. That’s not the latest flagship chip from Qualcomm but that doesn’t mean it’s not fast.

It then comes with 128GB of storage as standard, plus the usual microSD card slot for adding more if you need to – up to 1TB.

This is an excellent combination of specs at this price point and I found the S10 Lite runs extremely smoothly regardless of task. Driving a Full HD+ resolution instead of something more demanding helps here and it also benefits battery life – see below.

Samsung’s One UI 2 (version 2 here) looks and runs well on the S10 Lite. As you can see from the scores above, it beats the S10 models and almost the S20, too. There’s not a huge amount to say about the software and you can read more in-depth about it in our Galaxy S20 Ultra review.

We found the battery life on the S10 range nothing to write home about, or genuinely poor in the case of the S10e.

Luckily, that’s not the case here and the S10 Lite has a lot to offer in this department. Samsung touts two-day battery life and for the lighter users out there like me, this may well be possible.

With a 4500mAh battery, at least there’s a fairly good reason for this phone being heavy and it should last heavier users a day with some juice to spare.

There’s no wireless charging here which is a shame but also an acceptable feature to miss out on to achieve the price. Fortunately, wired charging over USB-C is extremely quick and can handle 45W – way above the average.

In our usual 30 minute charge with the phone starting from dead, the S10 Lite reached an impressive 57%. Not quite the 63% Samsung shows on it’s website when talking about fast charging but excellent all the same.

The Galaxy S10 Lite is a £579 phone, which means it sits somewhere between mid-range and flagship in the market. Considering what you get for your hard earned money, we’d say it’s an affordable flagship. It’s reminiscent of the kind of value for money OnePlus used to offer with its handsets.

Our review sample was supplied by Vodafone.

At the time of writing, you can buy the S10 Lite for just £499 directly from Samsung. That price is also matched at retailers including Amazon, Argos and John Lewis.

As standard, this comes with 128GB of storage.

Even at full price, the S10 Lite is cheaper than the Galaxy S10e (£669) which was the affordable of the initial S10 line-up. The S10 was £799 and is still £100 more than the Lite model at the time of writing. You can likely find the S10e for a little less but it’s not worth the small saving.

Oddly, the S10 Lite didn’t get a release in the US but you can find it on Amazon if you really want it.

Overall, there’s little I can find to dislike about the Galaxy S10 Lite with most quibbles being personal preference.

This is an excellent value for money smartphone from Samsung offering a well-rounded set of specs, design and performance.

You get a high-quality screen, powerful internals, a good set of cameras and other features like the in-screen fingerprint scanner. Furthermore, battery life is solid

Things like no wireless charging and waterproofing are somewhat understandable to distance the phone from more expensive Galaxy devices. A headphone jack would be nice and some users will likely prefer to have a telephoto lens instead of macro.

Apart from those minor things, there’s not much that’s actually ‘Lite’ about this phone. Samsung should have called it the S20e.

It’s a great choice for those looking for an affordable Samsung flagship but that doesn’t mean it has no competition. If you’re open to other brands then check out the Xiaomi Mi 10, OnePlus 7T, Google Pixel 4 and iPhone XR.