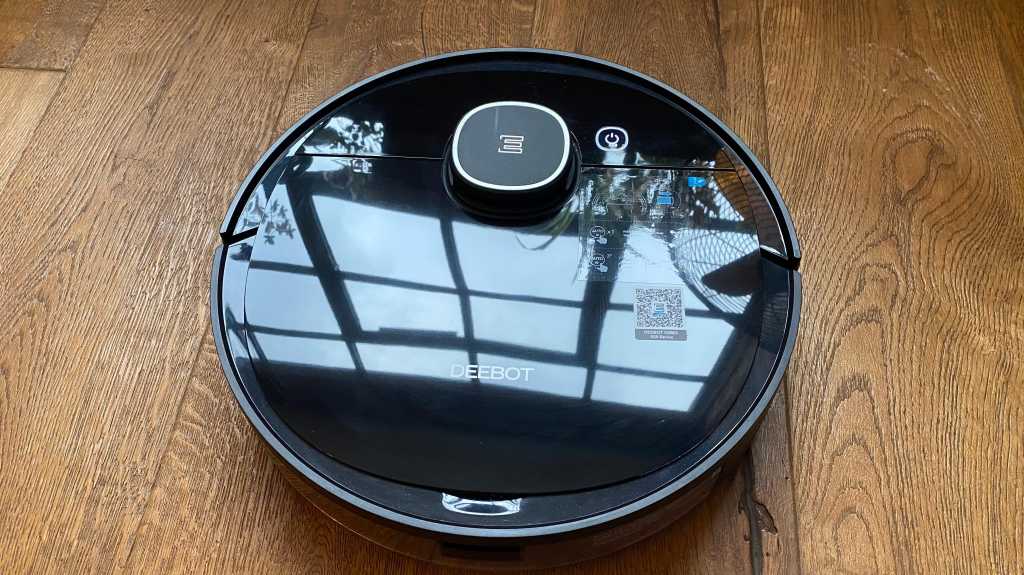 If you can afford to spend a bit more on your robot vac, we’d recommend the Deebot Ozmo 920. It cleans well, with a brush attachment for carpets and a mop function. It also has the extras that you’d expect from a more expensive cleaner, such as custom area cleaning and virtual boundary mapping. And in practical terms, its climbing ability means it won’t get caught on every raised surface in your home.

We liked the Ozmo 930, giving it  four out of five stars in our review. The 920 is even better. If you’re looking for a robot vac, read on to find out why this is a contender for your cash.

The Ozmo 920 is like a tank. First off, it has a raised platform on top, from which vantage point lasers survey and map your home to seek out and eliminate under-sofa dust bunnies. (It uses Lidar, a method of detecting distance by illuminating a target with a laser and measuring reflected light with a sensor.)

Second, the thing has determination. The raised thresholds that stump other robot vacs are no problem. It pushes doors open. It trundles over wires. It climbs onto cushions. I watched in surprise as it knocked over a picture that was propped against a wall, clambered onto it and then vacuumed it remorselessly.

If you have pets, move their bowls. If you don’t, the 920 will shunt them along until they are empty, leaving a stream of water behind. Will this slow it down? No, it will not. The 920 also has a mopping function, so water is no obstacle. It would probably ford a river if it got the sense that there was some fluff on the other side.

The 920 has a blandly sinister voice (which you can switch off). “I am starting the clean”, it says weirdly. It sounds like a lady HAL 9000 and I realise that every dystopian nightmare I have had is coming to pass. However, my floor looks great and I haven’t moved from the sofa, so I don’t care.

The 920 has three power settings: quiet, standard and max. None of them are off-puttingly loud and quiet is quiet enough that you can forget about it, until it sneaks up and rams into your ankle. (Ecovacs states that its decibel level is 66dB.) I found that this setting was fine for most cleaning.

The Deebot 920 is straightforward to set up, via a free app. The app itself is simple and well-designed, with plenty of information on all aspects of the cleaning, including how long until brushes should be replaced. The vac is also Alexa-compatible, so you can use voice commands to control it if you prefer.

The only set-up issue I encountered was in trying to add a second user. At first they couldn’t join because they didn’t have an account. They then made an account, which only elicited the response that the user couldn’t be added because the account already existed. My guess is that this occurred because we were trying to control the device through an iOS and Android app.

The 920 has two cleaning modes: normal and advanced. Because it maps your home, it cleans in a very logical way, unlike many robot vacuum cleaners, which can be maddening to watch. In advanced mode, it retains the map it makes, allowing you to name areas, set up custom cleaning and easily create virtual boundaries to prevent it vacuuming or mopping in one or more areas. People with larger homes can create two different maps for different floors.

In spite of the laser platform on top (which only increases its height by a couple of centimetres – the cleaner is 10cm high in total and about 34cm in diameter), the 920 was still low enough to get under all of the furniture in my home. If you’re thinking of investing in one, however, it’s worth measuring the height of your sofa and other key pieces of furniture.

The mop function is as good as anything I’ve seen on a robot cleaner. It can vac and mop at once and it’s easy to set up the function – but I’m still not sold on the concept. In the end, it’s just not as effective as mopping it yourself, although it may give you a bit more time between proper cleans.

And while its voice is undoubtedly creepy, the communication is great and it’s always abundantly clear what’s happening with the machine. There is no inexplicable beeping to decode when something goes wrong.

My only complaints, which are minor, are about the small dustbin (0.43L) and the way that hair and debris seemed to get tangled up around the brush and in the centre of the machine. That didn’t impede its functioning (as I said: the thing is determined and will still vacuum a room with a sock and half a a dog chew mangled inside), but I did have to spend a fair amount of time rooting around in its innards, removing rubbish. Still, the main brush is removable, and Ecovacs suggests that for daily use on hard floors, its suction function alone is sufficient. The brush is intended for deeper-pile carpet.

The battery life will allow it to clean for 110 minutes, which was more than enough for my flat. People with two floors will probably need to recharge between them.

At just shy of £500, it’s not the cheapest robot vacuum cleaner on the market but it strikes a good balance between price and performance.

The 920 is an upgrade to the Deebot 930, which we liked a lot in spite of some reservations. The 920 has manually adjustable suction settings, improved battery life, more suction power (up from 1,000 Pa to 1,200 Pa) and a greater climbing ability. The 920 is also priced lower now than the 930 was when we reviewed it.

We think that it’s a good quality cleaner that hits all the key points: it’s low enough to get under furniture; its climbing ability means it won’t run aground on every raised surface in your home; its route is logical enough that it won’t drive you mad if you happen to see it at work; and it has all of the extras you’d hope for in terms of custom cleaning.