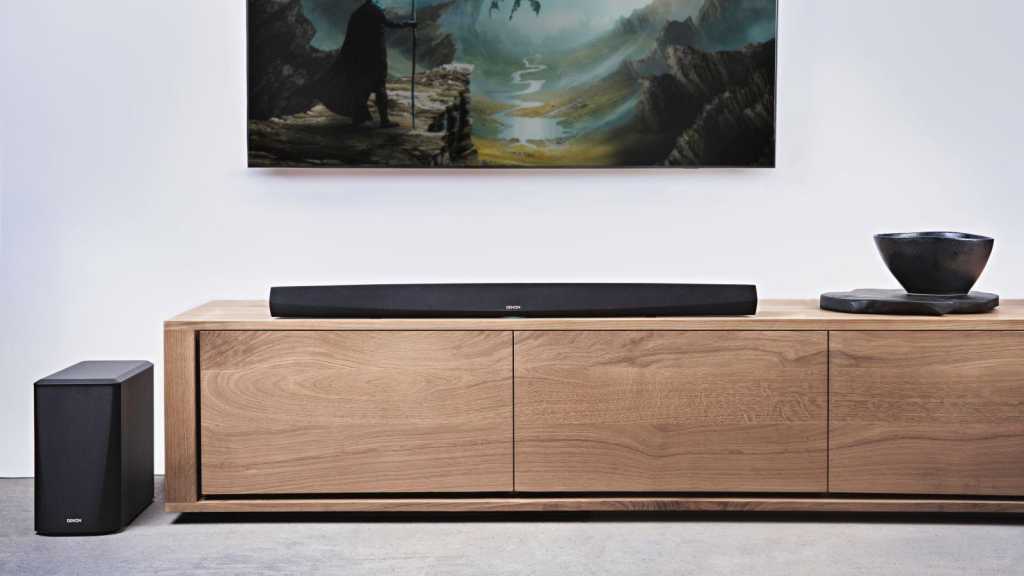 The Denon DHT-S516H soundbar system ticks a lot of boxes: it sounds incredible, with crisp highs and booming bass that you can feel in your chest, the wide soundscape is immersive and boasts a variety of connectivity options from AirPlay 2 to Spotify Connect. It is expensive at nearly £700, but the functionality on offer justifies the price.

The Denon DHT-S516H soundbar system may not have the catchiest name, but what it lacks in branding it more than makes up for in the audio department. With an RRP of nearly £700/$800, the Denon system isn’t cheap, but it does offer great value for money for those that want to invest in a high-end system to enhance their movie-watching experience.

I’ve been using the Denon DHT-S516H system to watch movies and listen to music over the past few weeks, and here’s what I’ve learnt.

The Denon DHT-S516H is a fairly standard system, comprised of a soundbar and accompanying wireless subwoofer, with relatively small dimensions for a bit of kit that packs such a wallop. It’s smaller than the likes of the Anker Nebula soundbar despite packing way more built-in tech and much better quality audio playback – so small, in fact, that Denon encourages you to mount the soundbar directly onto the wall, including brackets and instructions in the box.

The soundbar system is largely black, with black fabric covering the forward-facing speaker array on a black plastic body and minimal controls on the right side of the speaker. These are very hard to spot – so hard, in fact, that I used the soundbar for about a week before noticing they were there, although I imagine that’s an intentional move to keep with the clean, minimalistic design of the soundbar. The controls are basic, only offering volume and mute controls, but it’s better than nothing.

Unlike most other soundbars, the Denon DHT-S516H soundbar doesn’t feature a built-in display, making it a little difficult to adjust volume – you’ll have to do it by ear rather than numbers, and that’s not something many people will be used to. Why spend time adjusting the volume when you know that volume 12, for example, is a comfortable level for the environment you’re in?

There is a dim blue LED beneath the soundbar that acts like an input indicator, flickering when registering input, but that’s all you’ll get.

The lack of a display would make the system hard to use with a remote, right? That’s probably why the soundbar system doesn’t come with a remote control of its own; instead, you’ll have to either use HDMI ARC, ‘teach’ the soundbar to respond to your TV remote using the IR sensor or, as Denon hopes, use the Heos app for iOS and Android.

It’s clear that the app is the preferred method of input, providing a wealth of extra functionality not accessible via most standard TV remotes. As well as being able to adjust overall volume (with numbers!!), you’re able to change inputs, tweak the EQ, access a Night Mode that reduces loud noises and plenty more – but we’ll go into more detail about that later.

The issue is that using an app on a smartphone seems like a good idea until you actually have to use it. Using a remote provides a near-instant response, while most smartphone users will have to grab their phone, unlock it, find the app, tap the relevant tab and adjust the volume.

I can’t help but think Denon is trying to push consumers too far too quickly, and that a dedicated remote control – with access to the advanced functionality available in the app – would be a far more efficient way of controlling the home cinema system. I’m all in favour of new tech, but like the old adage, “if it ain’t broke, don’t fix it”.

As you’d expect from a £700/$800 soundbar system, there are plenty of connectivity options to choose from: Optical, HDMI (with ARC support), Coaxial, Aux and even a USB port that you can use to play locally stored music, making the Denon DHT-S516H system compatible with a range of existing TV setups. There’s also Bluetooth support, allowing you to connect your smartphone or tablet wirelessly, but there’s much more to the system than that.

Arguably one of the headline features of the Denon DHT-S516H system is built-in AirPlay 2 support, perfect for iPhone, iPad, Mac and Apple TV owners, allowing you to wirelessly stream any audio via the soundbar system without the need to connect via Bluetooth and compromise on sound quality. The upgraded AirPlay tech also allows you to sync the system up with any other AirPlay 2-enabled speakers on the same Wi-Fi network, providing perfectly in-time multi-room audio.

Denon didn’t stop with AirPlay 2 support either: the system also offers Spotify Connect, Amazon Music, TuneIn, Deezer, Napster, Soundcloud and Tidal integration, covering most bases when it comes to music streaming services. There’s no Apple Music support unlike the Sonos systems, but we’ll let that one slide with AirPlay 2 support.

The catch, like with most aspects of the system, is that you have to use the Heos app for iOS and Android to initiate music playback on most of the aforementioned services. Once you’ve started playing music via the Soundbar, you can then use Google Assistant or Amazon Alexa to control playback.

It’s a handy trick, but frustratingly, this doesn’t extend to general soundbar use – you can only use the virtual assistants to adjust volume, skip tracks and more when music is playing via a built-in streaming service. That could’ve helped alleviate the issues with the lack of a remote, and I’ve got my hopes up that it’s a feature that’ll be pushed out via OTA update in the future.

Though it should come as no surprise as a product from a company held in such high regard in the audio community, the Denon DHT-S516H soundbar system sounds incredible. Thanks to the standalone wireless sub, prominent, present bass packs a thud even at relatively low volumes, and there’s not a hint of distort at high volume either.

It really is impressive and comes into its own when watching Hollywood blockbusters – you can feel the thud of gunfire and explosions in your chest, adding a special something to the viewing experience. But don’t think that the prominent bass overpowers the rest of the range – the sound separation is impressive, with heavy bass tones having little to no effect on the crisp, clear mids and highs.

The wide soundscape produced really immerses you in what you’re watching, and the directional sound reproduction is impressive –  if you see a door creek to the left of the screen, you’ll hear that with pinpoint accuracy. In fact, it’s so accurate that I can confidently close my eyes and point to where an on-screen sound has originated.

The audio performance can be further improved by the use of the appropriate EQ: the Movie mode focuses on punchy bass and clear dialogue while Music mode produces a wider soundstage and a more balanced output.

Of course, the quality depends on the connectivity and surround sound format you opt for. You’ll find support for Hi-Res audio (DSD and FLAC files streamed locally or via USB) alongside DTS, Dolby Digital and Digital Plus surround sound decoding, and although you’ll find Dolby Vision support for connected HDMI devices, you won’t find Dolby Atmos support here – and that’s a little surprising considering the audio capabilities of the system.

I’m not sure how much of an effect Dolby Atmos support would have when the performance is already this impressive, but it’s certainly a box that isn’t ticked here.

With an RRP of £699/$799, the Denon DHT-S516H surround sound system isn’t the cheapest around, but you do get a lot for your money: the audio quality is incredible, even without Atmos support, and the variety of connectivity options matches that of the similarly-priced Sonos Playbar – and you don’t get a wireless sub thrown in with Sonos’ most popular offering.

That’s made more attractive by the fact that you can currently pick up the system for a discounted £599 at retailers like The Electric Shop, and although out of stock at the time of writing, Currys PC World sells the system for as little as £549. The same can’t be said in the US, with retailers like Amazon and Denon itself sticking to the $799 RRP, but it’s still great value.

If you want a better idea of how the DHT-S516H compares to the competition, take a look at our selection of the best soundbars.

The lack of a remote is a relatively small complaint about a soundbar system that’s largely impressive. The Denon DHT-S516H soundbar system ticks a lot of boxes: it sounds incredible, with crisp highs and booming bass that you can feel in your chest, the wide soundscape is immersive and the variety of connectivity options from AirPlay 2 to Spotify Connect means you’ll probably be using the system as your main speaker rather than something you only use when watching TV.

Considering you get a similar offering without a subwoofer from the competing Sonos Playbase, we think the Denon DHT-S516H system offers great value for money – even at such a high price point.