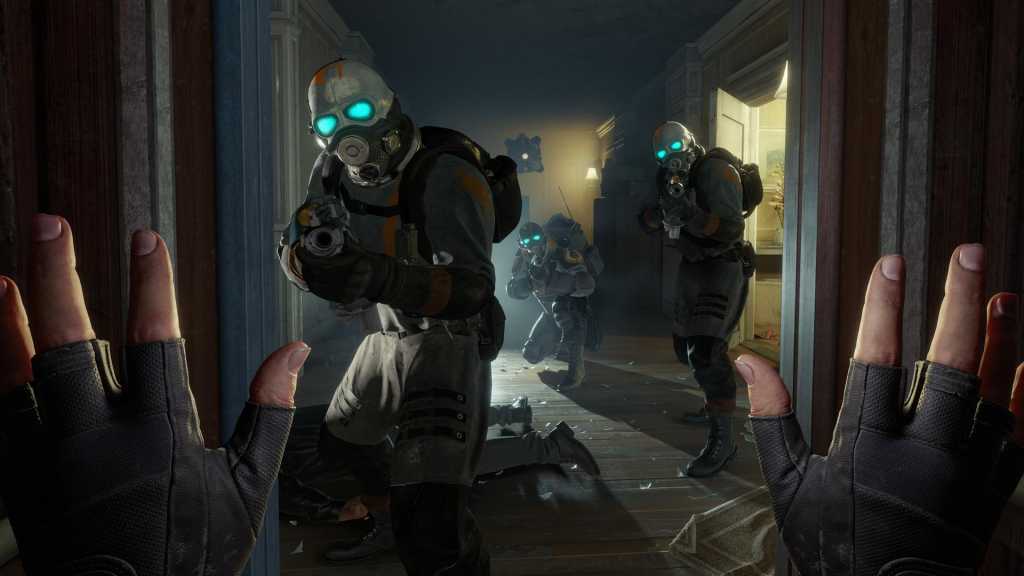 Tight gunplay and a solid, ambitious crack at AAA VR mean that Half-Life: Alyx is one of the big hits of virtual reality. While the combat could be a little too mellow for some, the ambulatory opening is dripping with atmosphere and provides a nice way for players new to VR to get familiar.

Virtual reality is in a weird place. No matter how impressive games like Boneworks, Defector or Blade and Sorcery actually are, the weight of expectation is always crushing: “Sure it’s good,” the gaming public says whenever a title like Half-Life: Alyx comes along. “But is it £1000 good?”

This nonsensical measurement has dogged every half-decent VR game since the platform came into being.

Valve is no stranger to unrealistic expectations. The developers have been hounded by consumers for their seeming inability to release a game with the number three in the title, and fans hold up their three biggest franchises — Left 4 Dead, Portal and Half-Life — as the gold standard by which other games should be judged.

These days, it’s harder to think of Valve as a development company. Currently, they’re actively developing Dota 2, Counter-Strike Global Offensive and Dota Underlords, but their card battler Artifact is in the weeds after a poorly received launch and, at least for me, it’s harder to be excited about their newest titles.

By announcing a new Half-Life game, Valve put themselves front and centre again: you only get to mess up a classic series once, and ruining the series’ legacy would have been painful for all the fans waiting to see what the deal is after Half-Life 2: Episode 2’s harrowing ending.

Is Half-Life: Alyx worthy of the name?

Luckily for everyone involved, Half-Life: Alyx is both a solid VR game and a good entry into the Half-Life series, adding worthy parts to the canon and providing a worthwhile experience whether you’re a diehard fan or new to the series, it offers a mix of fan favourite details and cracking blockbuster set pieces that you don’t see a lot of in virtual reality.

Ever want to know exactly how those health stations Gordon Freeman uses actually work? Alyx has the answer, and it’s a gross one. Existing in Half Life’s world is satisfying, whether this involves reading newspaper articles, finding fan-favourite objects and even just getting to see how this world works, up close.

The headcrab in the ointment

There are a few ragged edges. Half-Life: Alyx’s combat is a bit serene, and your only interaction with enemies seems to be shooting them. Considering titles like Blade and Sorcery or Boneworks give every object a physical weight that you can use to damage, disable, or hobble your enemies, the fact that nothing physics-related seems to have an impact on your enemies is a bit disappointing here.

Sure, you can belt a head crab into a hole with a chair, but the fact you can’t squish said headcrab with that same chair feels like a missed opportunity.

Similarly, weapons being locked to the weapon hand you choose before the game starts is a bit jarring, as most VR players are now used to tossing weapons from hand to hand as the situation dictates it, and having the training wheels on here so you can’t let go of the gun is a little frustrating, especially when you have to juggle with the UI to use your left hand to grip things, activate machines or just pull something out of your convenient wrist pockets.

There’s a real lack of pace to the early encounters, and you spend the early fights throwing down with lumbering zombies. It’s a good way to learn the ropes for combat but it’s a few hours before you get any action to really sink your teeth into.

Later fights are much more satisfying, and an encounter with “Jeff” is a particular highlight. We don’t want to spoil it here, but it oozes Valve quality, and it is — again — something that VR just doesn’t get enough of, and is a moment you’ll want to talk to your friends about.

You don’t get a ton of interesting weaponry, but you get the FPS essentials: a shotgun, an SMG, and a pistol. While the range of weapons is disappointing, the weapon upgrades are really impressive: adding a holographic sight that highlights enemies is neat, while a tiny robotic arm to reload your guns is another clever touch.

The currency you use to buy upgrades, Resin, is stuffed in every hidden area you find, so you’re often rewarded with new weaponry.

More than the sum of its parts

The longer you spend with Alyx, the more the game opens up, culminating in some truly special set pieces, and the appearance of a couple fan favourite characters. While the game starts out as a slightly unusual entry into the Half-Life franchise, by the time the credits roll it’s hard not to find yourself a little sad that it’s over – it took me ten hours to finish across a few sittings though, so I can’t complain about the length.

But we come back to that same, disingenuous question. Is it worth £1000? When you include the gear you need to play, that is – the game itself is £46/$60 from Steam.

That’s a choice you’ll have to make for yourself. But when you consider most gaming PCs have a VR-capable card at this stage, and VR headsets like the Oculus Rift S (which I reviewed Alyx on) are available for just £400, it could be cheaper to jack into the virtual world than you think, and games like this are a must-play for the VR curious.