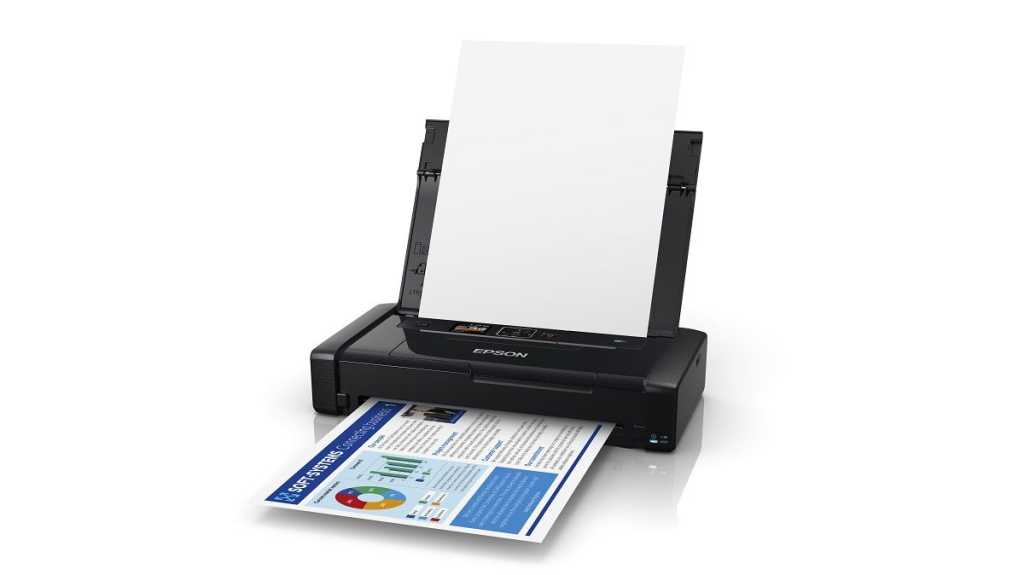 It’s not particularly fast, and the high cost of replacement black ink is disappointing, but the lightweight, compact design of the WF-110W will be ideal for mobile workers who need a printer that they can carry around the home or away from the office.

This is probably not the best time to be launching a portable printer, while we’re all being encouraged to work at home whenever possible. But, of course, there are many important jobs that still need to be done, and which often involve travelling from location to location.

There may also be some people who are a bit tight for space when working from home, and who might prefer a compact printer that doesn’t need a whole desk to itself. If you do need a compact and portable printer that you can carry around with you then Epson’s new WF-110W is certainly a good choice – albeit a rather expensive one.

The emphasis, of course, is on portability and the WF-110W measures just 309mm wide, 154mm deep and 61mm thick. It’s very light too, weighing only 1.6kg, so it’s about as light and portable as many laptops.

There’s a small power supply unit included with the printer, but it also has an internal battery that should last long enough to print around 50 pages.

Epson says that it takes about 2.5 hours to charge the battery using mains power, but right next to the power sockets you’ll find a micro-USB port, which can be used both for printing and for charging the battery. 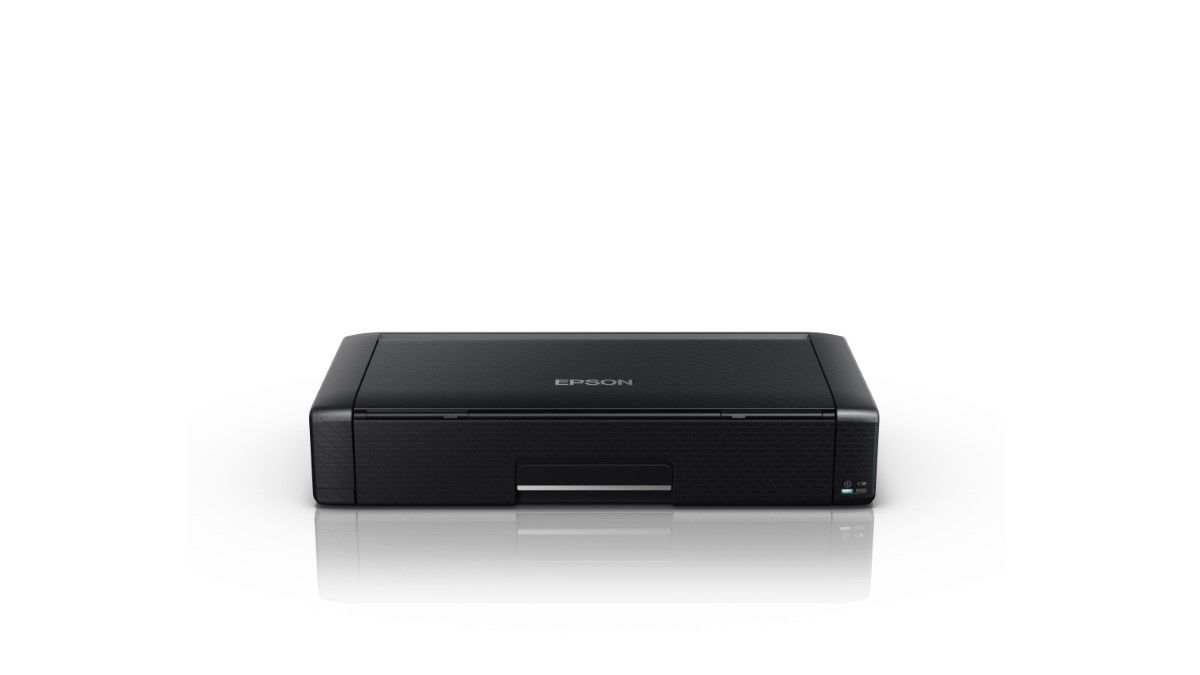 It takes longer to fully charge the battery via USB – almost 10 hours – but if you only need to print a few pages when visiting a client then you’ll probably be able to connect the WF-110W to your laptop for a quick top-up without draining the laptop’s battery too much.

Some cars and vans now have USB ports on the dashboard, which may be able to charge the printer too.

The printer itself is fairly conventional, using a four-colour inkjet mechanism with 5760x1440dpi resolution. It’s not a multifunction printer, though, so it doesn’t include a scanner or copier as well.

There’s a single paper tray that can hold 20 sheets of A4 paper, as well as smaller paper sizes and envelopes. As mentioned, you can connect it to your PC or Mac using a USB cable, but the WF-110W can also connect to a W-Fi network, or use a feature called WiFi Direct to make a direct connection to a specific computer or mobile device when you’re away from your normal office network.

The printer software for Windows is provided on CD – with the Mac driver available to download from Epson’s web site – but the printer also has a basic printer driver for Windows built into it, so you can actually install the Windows software straight from the printer itself if you need to.

Mobile devices can use Epson’s own iPrint app, which is available for Android and iOS, and the WF-110W also supports Google’s Cloud Print service too.

Epson quotes speeds of 7 pages per minute for mono printing, and 4ppm for colour, and the WF-110W does hit those speeds – but only when running off mains power.

If you’re running the printer on battery power then Epson quotes lower speeds of 4ppm for mono and 2ppm for text – and, again, the WF-110W, was right on the nose with those speeds when we tested it with our standard set of Word and PDF documents.

But, to be fair, those speeds are perfectly fine if you’re only printing simple documents, such as letters and invoices. 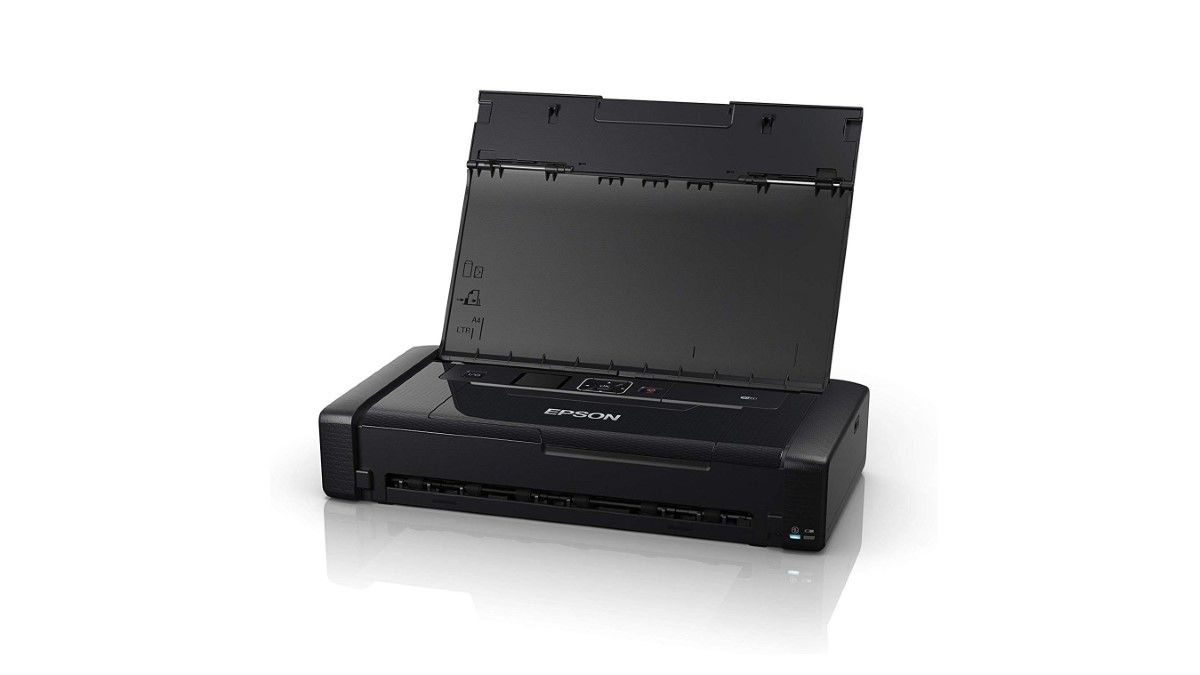 Print quality is very good, though, thanks to Epson’s use of pigmented inks for both colour and mono printing. These produce crisp, black text and bold colours. The text output is a little heavy – it doesn’t rival the smoothness of laser printer output, as some of Epson’s best inkjets can do – but it’s perfectly clear and legible. The pigmented inks are also very durable and dry quickly, which will be important if you’re printing on the move.

The portable design of the WF-110W inevitably means that it’s more expensive than a conventional inkjet printer – see below.

It’s not too bad, but you do need to keep an eye on the day-to-day running costs as well. Most inkjet printers now offer both standard size cartridges, and larger ‘high-yield’ cartridges that can help to reduce printing costs.

That works out at about 8p per page for colour printing – which really isn’t too bad. However, printing simple documents with plain black text is almost as expensive, at 7.5p per page.

That’s far more expensive than a conventional inkjet printer, so you are paying a hefty premium for your portable printing requirements.

The WF-110W does allow you to sign up for Epson’s ReadyInk service, but this simply means that the printer is smart enough to recognise when it’s running low on ink and can order replacement inks automatically over the Internet. It doesn’t offer any discounts or savings on the cost of the inks themselves.

The WF-110W is the latest addition to Epson’s range of portable printers and, somewhat confusingly, Epson’s US web site and quite a few online retailers refer to it as the ‘WF-110′.

We asked Epson for clarification, and they simply said that the printer goes by both names. There’s also an older model called the WF-100, which is still available, so make sure that you buy the correct model. It’s $299.99 in the US.

Epson charges £219.99 when buying direct from its own web site, but you can probably pick it up for just under £200 if you shop around online, including Amazon.

You are paying a premium for the portable design of the Workforce WF-110W, but it will still be a good option for travelling users who just need to print a few pages every now and them. Or if you want to move it around your home.

The USB charging option will also come in handy for people who spend a lot of time away from their office.

Print speeds are adequate for light use when you’re on the move, and the print quality is as good as a conventional desktop printer, so you can be sure that your on-the-go documents make a good impression.

Check our chart of the best printers to see what else is available.