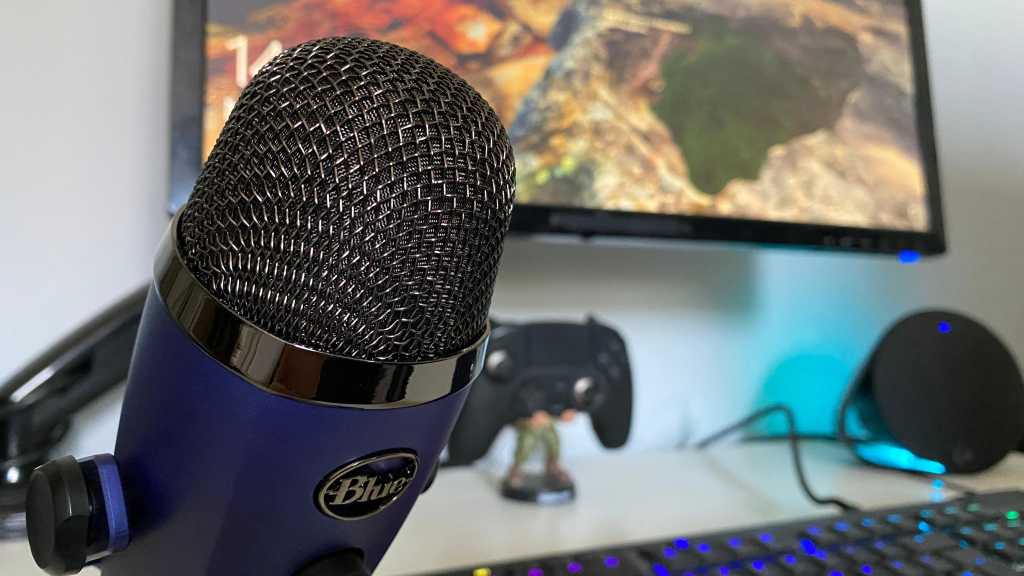 The Blue Yeti Nano is a great bit of kit for those just getting started with content creation, offering a massive step forward from the likes of built-in microphones found in phones and cameras, but it’s not quite what most would class as studio-quality. There’s also a lack of physical controls on the mic itself, due to the small dimensions, which could be frustrating for some.

The Blue Yeti X is a great bit of kit but, let’s be honest here, it’s a bit of a chunk. It’s the first thing you notice when you watch streamers and YouTubers, and even with a gorgeous premium look, it can be a bit much for smaller setups. The stand is huge and it takes up a significant area on your desk if you don’t buy a movable arm, and it seems Blue took this information on-board when developing the Yeti Nano.

The small-but-mighty Nano is designed for beginners, offering a budget-friendly step-up from headset microphones for budding YouTubers and streamers, although the small dimensions meant a sacrifice had to be made in the feature department.

As the name suggests, the Yeti Nano is much smaller than the standard Yeti in just about every area, from the size of the microphone itself to the adjustable stand. This means it’s much more at home sitting on your desk, and if you do use a microphone arm for videos or livestreams, it should take up much less space on-screen.

Don’t misunderstand me: it’s not microscopic at 211 x 109 x 96mm, but it’s certainly a massive improvement compared to most other semi-pro USB microphones on the market. 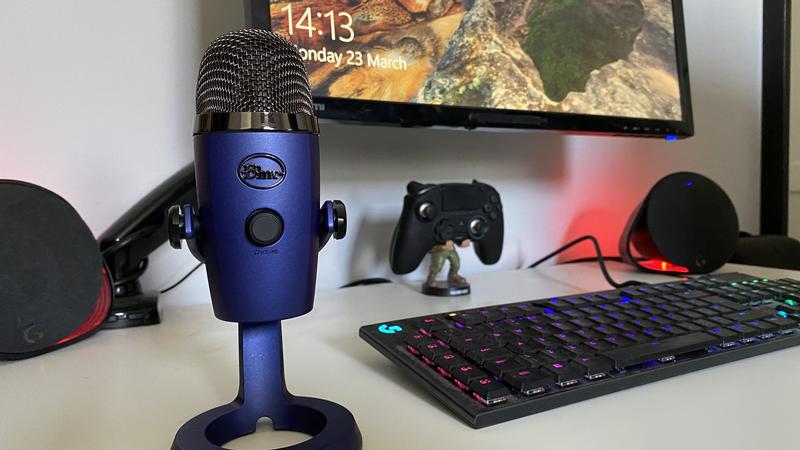 It’s also a good-looking microphone that you don’t mind seeing used in videos, sporting a matte-blue metal body with grey metallic accents and a microphone mesh that, while standard, boasts great build quality.

The Yeti Nano, then, seems like the perfect option for blossoming YouTubers and streamers that want to improve the audio quality of the content they produce without forking out for an overly expensive, chunky microphone. But while the small dimensions of the Nano are a welcome change, a sacrifice or two had to be made.

The biggest sacrifice is in the physical controls department; the Yeti Nano only features a single on-mic dial that adjusts headphone volume, and a single button to switch between recording modes.

The default gain is decent enough – for my vocals, anyway – but if you’re recording a louder speaker, you’ll have to adjust the gain via the Sherpa companion app for PC. Admittedly, the app is easy to use, but it’s not as simple as being able to adjust microphone gain on-the-fly via an on-mic dial like with many competing USB microphones. 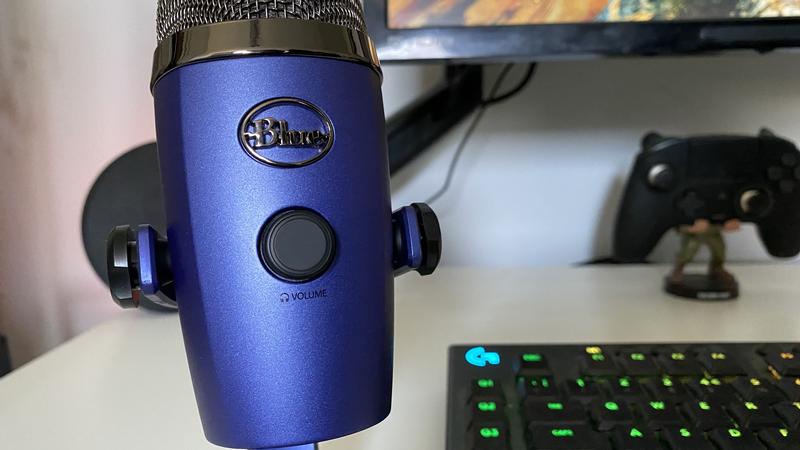 There’s also a 3.5mm headphone jack and a microUSB port to connect the mic to your PC, and although the quarter-inch threaded mount isn’t compatible with most microphone arms, you do get a 0.75in screw-in adaptor in the box.

Crucially, the Blue Yeti Nano boasts great-quality recording capabilities perfectly suited to creating content on YouTube, Twitch or any other online platform, offering a huge jump forward from built-in microphones that you find on laptops, webcams and DSLRs.

The side-address style of the microphone means you stand the mic in front of you and talk directly into it, opposed to some microphones where you talk into the tip, allowing you to talk past the Nano to avoid airy sounds and potential pops. That’s crucial because the Yeti Nano doesn’t come with any kind of pop protection by default, although it is fairly inexpensive to pick up a pop shield online if you find you do need one.

There are two recording modes available – cardioid and omnidirectional – with the former working very well, helping to eliminate any unwanted background noise, although don’t expect any miracles here. Switching to omnidirectional mode allows you to capture the ambience of the environment without any real sacrifice to overall quality. Unfortunately you won’t find bidirectional or stereo recording modes, which are found on the Yeti, making it less-than-ideal for interviews and podcasts if you were planning to share a single mic. 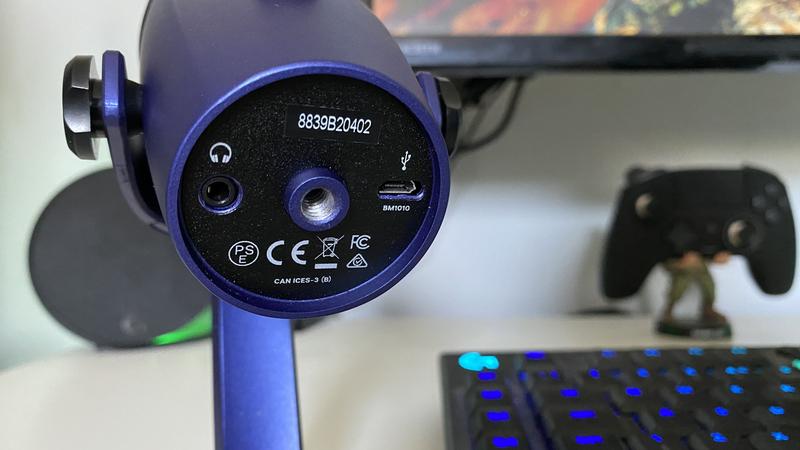 The USB nature is focused at beginners, offering a far easier way to use a high-quality mic than playing around with mixers and XLR microphone setups, and the quality reflects that; it’s more than enough for the likes of YouTube, but this isn’t quite what I’d call a studio-quality microphone.

It’s certainly crisp and clear, but it feels like it’s focused more on clarity in the mids and highs, losing some of the rich timber of deeper voices. That’s not to say bass tones are ignored completely, and the issue can be combated by moving closer to the microphone, but it’s still not perfect. There is also the issue of processing that comes with the use of a USB mic, and although I’d argue that it’s not noticeable to the everyday consumer, audiophiles and audio engineers may pick up on it.

While there is arguably a sacrifice in the features department, I think the £99/ $99 price tag of the Blue Yeti Nano makes it an easier pill to swallow. It’s not designed to be a one-size-fits-all option that costs hundreds – instead, it’s a budget-friendly option aimed at those just getting started in content creation and features functionality most relevant to that audience.

Of course, there is the argument of paying £20/$30 more and investing in the standard Blue Yeti, with more features available, but you’ll lose the small form factor that makes the Yeti Nano so special.

If your budget is restricted to around £100 though, there’s also the rugged-looking Trust Gaming GTX Fyru mic that offers four recording modes and five-colour backlighting, along with of course super crisp audio – just not any additional software like the Nano.

For more, take a look at our selection of the best mics for streaming and podcasting.

The Blue Yeti Nano is an impressive USB microphone with great clarity and small dimensions that make it perfect for budding YouTubers and streamers short on desk space. It’s easy to use and generally provides great results, although the lack of physical controls on the microphone means you have to use PC software to adjust microphone gain levels, and that can be a bit of a pain to do on-the-fly.

Still, though, it’s a great budget-friendly USB microphone that’ll be more than enough to improve the quality of audio in your videos. If you’d like something with more versatility and better quality, then take a look at the Samson G-Track Pro or Blue Yeti X.

If you’re looking to improve your streaming setup, take a look at the best webcams available right now.