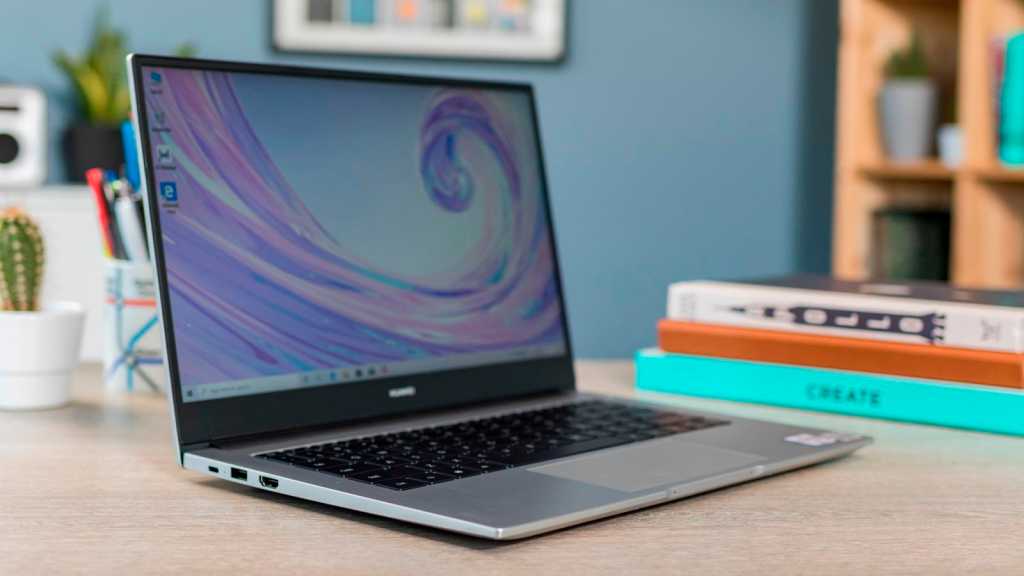 The MateBook D 14 offers serious value for money with impressive AMD-flavoured mid-range specs that can outperform similarly-priced laptops, and let’s be honest, it’s a well-designed, premium-looking laptop too.

Huawei’s MateBook D 14 shares many design similarities with the high-end MateBook X Pro without compromising on the affordable nature of the laptop. Couple that with powerful mid-range internals and all-day battery life, and you’ve got an impressive mid-range laptop.

Edging towards a high-end design

At a glance, the MateBook D 14 looks like a high-end laptop that wouldn’t look too out of place next to a MacBook Pro. It’s lightweight and portable at 1.38kg and 15.9mm thick, made from a durable aluminium alloy and sports a Space Grey finish that shimmers with a purple-ish tint depending on the light. It’s also available in mystic silver, as pictured, but this variant isn’t available in the UK.

The bezels that surround the 14in 1080p FullView display have been shrunk to 4.8mm, an improvement on the 2018 variant, although there is still a thick bezel at the bottom of the display so it’s not exactly the same as the high-end variants produced by Huawei. The 16:9 display is bright and crisp with a maximum brightness of 244nits – slightly less than the claimed 250nits – and the narrow bezels provide a clean look that doesn’t look out of place in 2020.

The thin bezels surrounding the display meant the 1Mp (yes, that’s one megapixel) webcam had to be rehoused, and like other Huawei laptops, it now lives within the keyboard itself. It’s certainly a bonus in the privacy department – the webcam is hidden in the chassis of the laptop when not in use – but the fact that it sticks out of the keyboard means it’s not the most flattering angle, and if you’re typing, it’s likely that your fingers will take up the majority of what’s captured by the camera.

It’s not the ideal placement for a webcam if you’re constantly video calling, but if it’s something you only do every now and again, I think it’ll suffice. 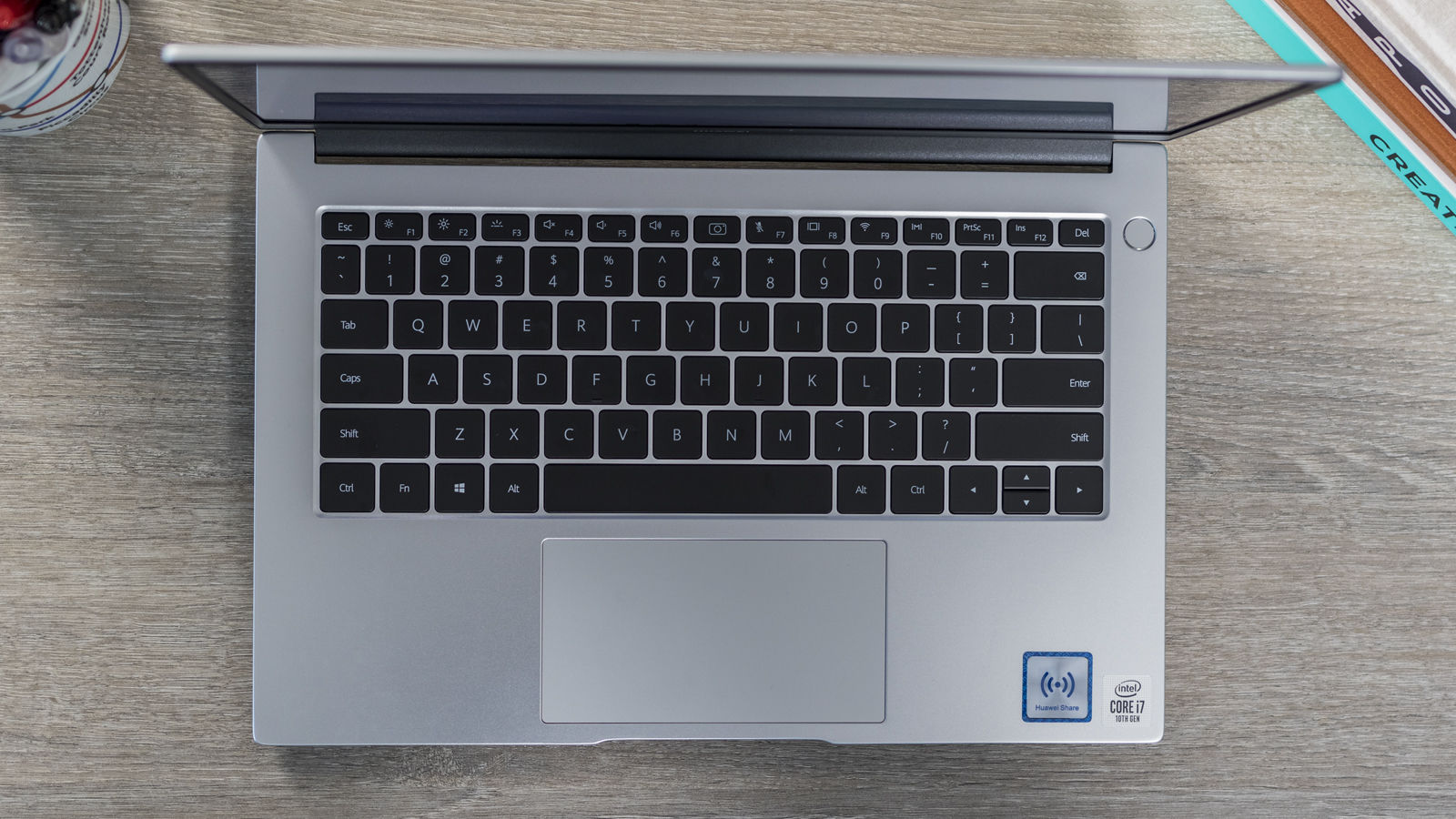 There’s also a slightly wider keyboard available this time around, making the keyboard more comfortable to type on, and the backlit keys should make it easier to type in the dark, but it’s not the perfect replacement. You see, the front-facing speakers of previous D Series laptops had to be ditched to make way for the larger keyboard, and with the new speakers hidden within the chassis, the audio quality isn’t that impressive.

But, let’s be honest here, it’s basically impossible to find great-sounding speakers on a laptop – it’s like the Unicorn of the tech world. The good news is that it does have a 3.5mm headphone jack despite the thin design, so if audio is a dealbreaker for you, you could always plug in a pair of headphones or desktop speakers to enhance the audio experience.

Like the previous D 14, Huawei has designed the 14in variant of the D Series to offer a 178-degree viewing angle that allows you to essentially flatten the laptop during use. I’m yet to find a single reason why anyone would do this, especially with a lack of touchscreen connectivity, but it’s a novel feature that makes the D 14 stand out from a sea of mid-range laptops in 2020. 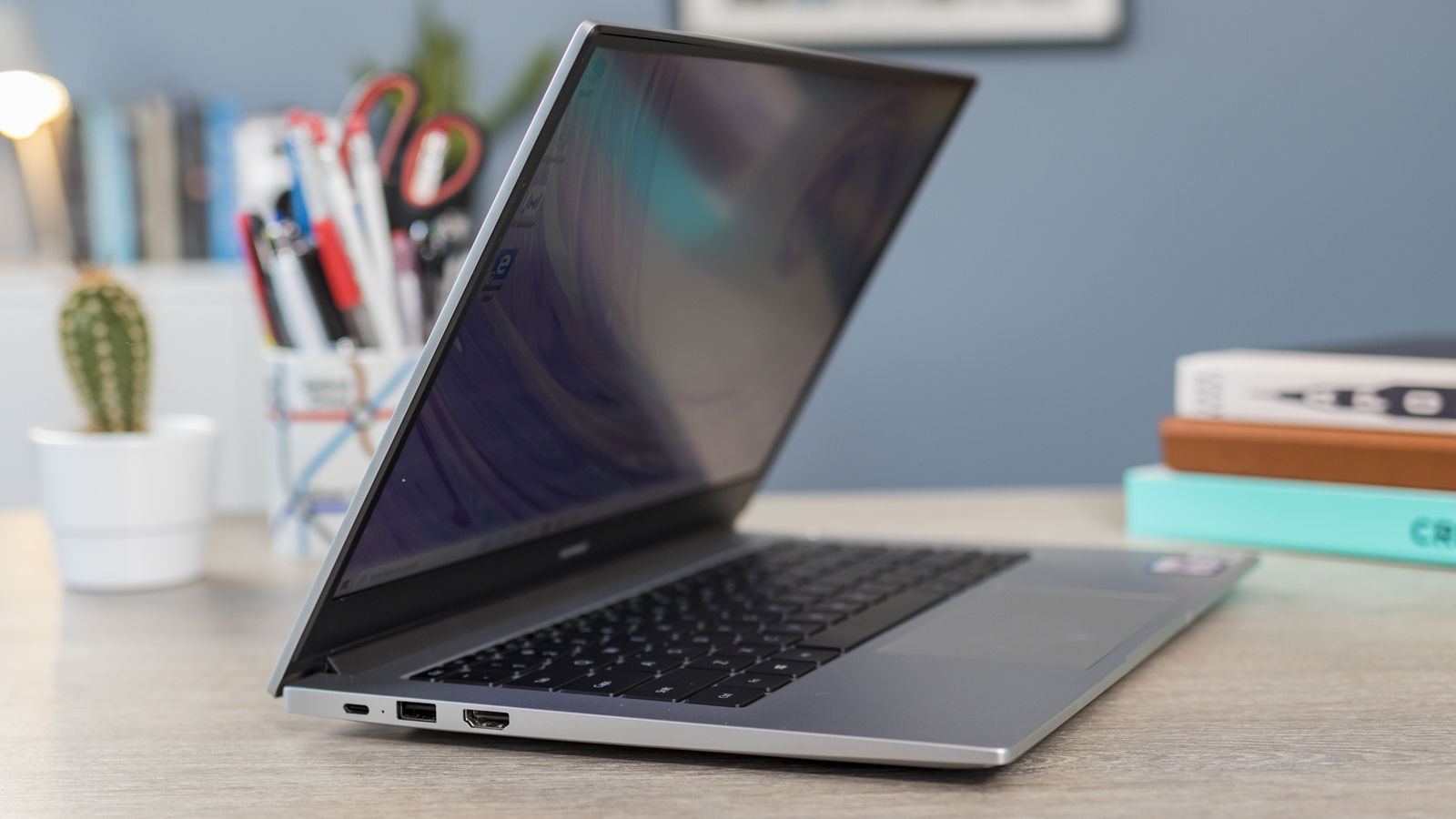 Great performance for the price

Let’s delve into the specs of the Huawei MateBook D 14. You’ll find an AMD Ryzen 5 3500U CPU with a Radeon Vega 8 GPU, 8GB of RAM and 512GB of storage split across separate Windows and Data drives – there are other options available with varying specs, but only in select markets. It comes with Windows 10 Home as standard too.

Those specs are pretty impressive for a mid-range laptop, especially when you consider the £650 price tag in the UK. It can even compete with the likes of the more expensive Lenovo Yoga C740 and Acer Swift 5 in certain areas, as seen in our benchmark test results below.

In terms of real-world use, the MateBook D 14 can easily handle standard work and play tasks, making light work of word processing, social media, basic photo editing and even light gaming. It’s not a gaming laptop in any way, shape or form so don’t expect to run photorealistic open-world games like Red Dead Redemption 2, but I played less demanding games including Fortnite and Rocket League without any real performance issues. It’s certainly an impressive feat when you consider the slimline nature of the mid-range laptop.

Another amazing thing about the MateBook D 14 is that it boots up near-instantly and, thanks to a Windows Hello-supported fingerprint scanner built into the power button, you won’t need to input your password either. It’s also near-silent thanks to the inclusion of Huawei’s Shark Fin 2.0 fan system. In fact, I only really heard the fans kick in when I attempted to play games – something the laptop wasn’t designed to do in the first place.

Despite offering a smaller form factor compared to the larger MateBook D15, the MateBook D 14 has the larger battery of the two at 56Wh, offering great battery life that should take you through a day of work without needing a top-up. Huawei claims it can last 9.5hrs on a single charge, but our benchmark tests found that it’d last a bit longer, totalling 10 hours and 2 minutes.

When it comes to charging, the Huawei MateBook D 14 is pretty fast. That’s down to the charger, offering 65W of power via USB-C that, in our tests, provided 43 percent of charge in half an hour. When combined with the impressive battery life of the laptop, it really is something that you can use all-day without concern and quickly plug it in when a top-up is required. 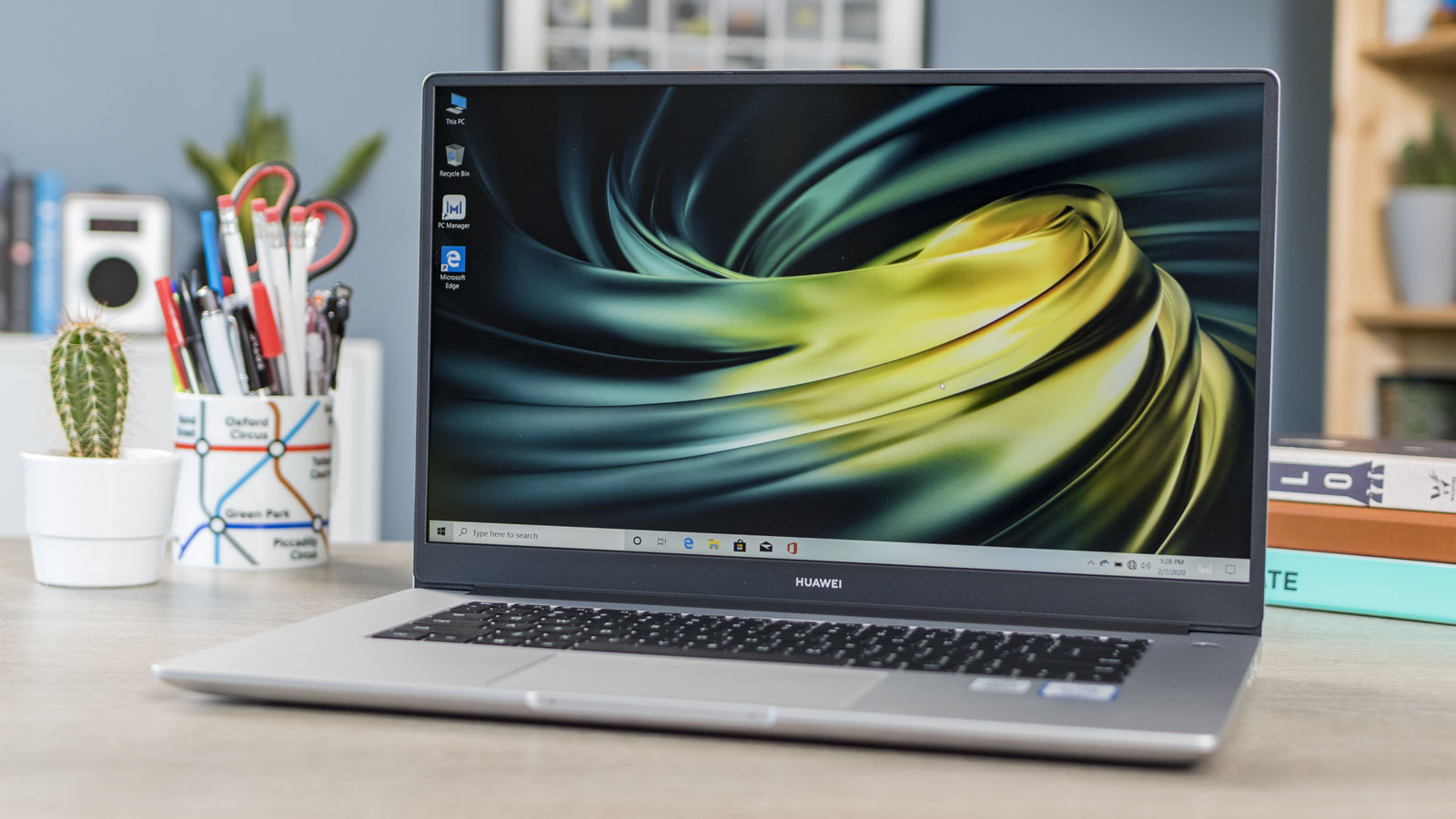 In terms of connectivity, the MateBook D 14 features Wi-fi 5 (802.11 ac), Bluetooth 5.0 and, like previous entries in the series, it offers support for Huawei Share too. It’s a great touch if you own a Huawei smartphone, allowing you to not only mirror and interact with your phone via the laptop, but wirelessly transfer photos, videos and files between the two.

With impressive mid-range specs, the Huawei MateBook D 14 is a tempting buy at only £649.99 in the UK – and that’s not including the fact that you’ll get a free Watch GT 2 when you buy it via Amazon. The performance on offer is like that of laptops £100-150 more expensive and it looks a lot better than similarly-priced laptops too. Frankly, at this price tag, the Huawei MateBook D 14 is hard to beat.

These are UK-focused prices as, unsurprisingly, you can’t currently buy the Huawei MateBook D 14 in the US. If you’re in the US and on the lookout for a new laptop, we recommend taking a look at our selection of the best laptops.

If you’re looking for something a little larger but want to stick with the MateBook aesthetic, you should consider the 15in MateBook D 15 at £599.99, although it’s worth pointing out that while you gain an extra inch in the display department, you get a smaller battery and a narrower viewing angle – hence the lower price.

The Huawei MateBook D 14 is the star of the company’s mid-range offering, boasting powerful mid-range internals that can compete with more expensive laptops and offer basic gaming capabilities, impressive 10-hour battery life and fast 65W charging that provides around 43 percent of charge in only half an hour. The display is bright and crisp, with thinner bezels improving the overall premium look that Huawei has crafted for the D Series.

When you throw in the attractive £649.99 price tag and the Watch GT 2 freebie (from select retailers) we think the Huawei MateBook D 14 is the perfect option for your everyday needs.