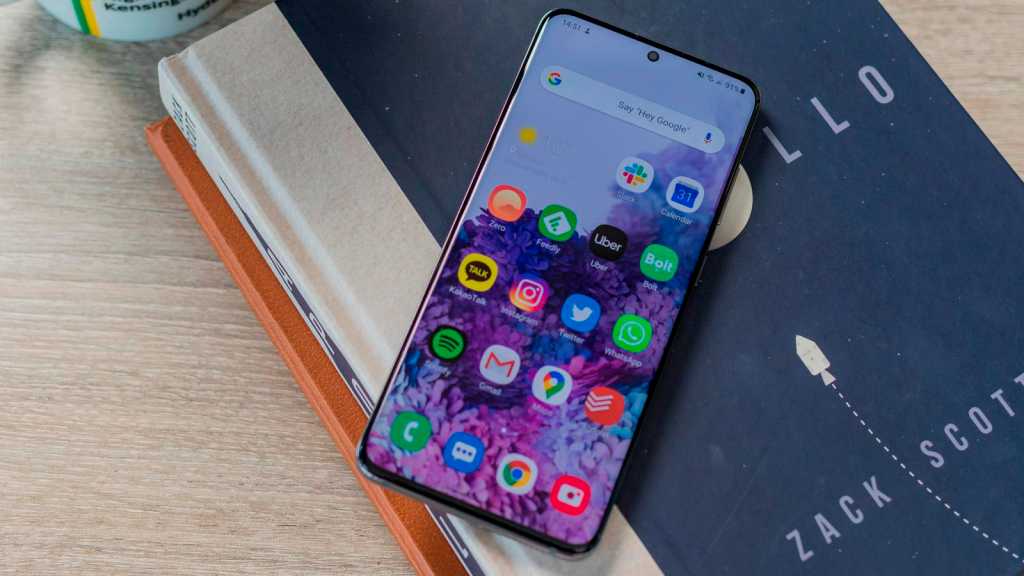 The Galaxy S20 is the best phone in Samsung’s S20 series, and simply the best phone the company makes right now. It’s compact, powerful, and packs a versatile camera system that may not match the Ultra on zoom or detail, but it meets – and sometimes beats – it across the rest of the board.

Going by Goldilocks, the Galaxy S20+ should be the best phone in Samsung’s new range of three, but I’m afraid it’s not so. Instead it’s the humble S20 that bests both its bigger brothers by virtue of being cheaper, more compact, and just as good everywhere it counts.

With an astonishingly slim, lightweight build, one of the best displays in a phone right now, and a camera that’s more versatile than the OTT S20 Ultra, this is simply one of the best phones you can buy right now. If you can afford it, as at £799/ $999 even the cheapest S20 is far from cheap.

The first thing everyone notices about the S20 is just how slim it is. That feels especially obvious to me, coming straight from the fairly chunky S20 Ultra, but I’ve had the same sort of comments from plenty of people who’ve never even seen that phone.

At just 7.9mm thick this is a thin piece of hardware, and 163g makes it one of the lightest flagships in a while too. With virtually no bezels the 6.2in display feels compact and easy to use one-handed, just about justifying Samsung’s decision to not offer any smaller handset.

Sticking with the front of the phone, the punch hole selfie camera has moved into the centre of the screen, but shrunk down a little too. It doesn’t feel obtrusive, and until under-display cameras are affordable enough to be mainstream this remains the best solution.

The blocky camera module doesn’t feel so obtrusive here, and it only juts out a little from the body. It’s not my favourite camera design, but it looks better than Ultra – not to mention the iPhone 11.

The headphone jack’s gone, but at this point that’s hardly a surprise. In return you get IP68 waterproofing, an in-display ultrasonic fingerprint sensor, and enough space for a big battery despite the slim build.

The Gorilla Glass body is a serious fingerprint draw – the worst I’ve seen in a while – and I’m not a fan of the full grey finish of my review unit. You can also get it in white, pink, blue, or red depending on the market and SKU though, so more exciting colours are available.

Camera: To zoom or not to zoom

For the S20 the camera isn’t quite as make or break as it is for its Ultra-sized sibling, but for better or worse it’ll still be the main thing that many judge the phone by. So here’s the long and short of it: the S20’s camera is powerful, versatile, and suffers from all the weakpoints you’d normally associate with a Samsung camera setup without introducing any new ones.

At the heart of the triple lens rear setup is a 12Mp f/1.8 wide-angle that’s ultimately pretty similar to the core of the S10’s camera. Ignore what may seem like a low megapixel count, as this is a potent camera that’s capable of solid detail and great dynamic range, and only really let down by Samsung’s algorithmic flourishes.

That is to say that, like most Samsung cameras, this well tend to skew warm, and if it catches a face in shot it will do its best to soften it by default unless you dig into the settings to turn skin smoothing off.

Compare the shots to those taken by the Ultra and it’s clear that the 12Mp sensor can’t match the detail discovered by that phones massive 108Mp shooter, or quite hit the same colour range, but there’s honestly little to complain about. You also won’t miss the depth sensor (found in the S20+, but not here) as this still does a great job on edge detection for portrait mode, even if the blur effect can look a touch artificial.

Night mode is also fine, but still not up to scratch with key rivals – it tends to over-brighten images, especially if there are any light sources in view at all. One strength is macro though – this will take beautiful close-ups (and foot photos) which is one area where the Ultra is seriously lacking. The foodies of Instagram should stick to the smaller S20 handsets.

Alongside the main lens there’s a 12Mp ultra-wide, but the real draw is the 64Mp ‘telephoto’. I put that in inverted commas because, well, it isn’t really a telephoto at all. It’s a 64Mp wide-angle lens (at 1.06x zoom if you want to get precise) that uses digital zoom to get results up to 30x.

Beyond 5x the quality begins to break down pretty sharply, but at low zoom levels you honestly probably won’t be able to spot the difference between this and a ‘true’ optical zoom. You can also use this lens to take 64Mp photos, from 1x zoom right down to 6x zoom, but at some loss of dynamic range (and with extra noise as you zoom in, as the camera is essentially cropping and then upscaling back to 64Mp).

Why this odd set up? 8K. Samsung offers 8K video recording across all three S20 phones, but that requires a sensor of at least 33Mp. You can record 8K at up to 24fps, but for anything other than landscapes and static subjects it really isn’t worth it, as the processing demands leave the stabilisation and autofocus pretty non-functional. And as with any 8K, there’s not really anything to do with it once you’ve filmed it anyway, unless you’re one of the few to own an 8K telly.

Finally, on the front of the phone there’s a single 10Mp selfie camera. Sadly this can’t match the 40Mp selfie shooter on the Ultra (my favourite front-facing camera in years), but it’s not bad. There’s decent detail, which is arguably what you want for capturing yourself at your best, but the dynamic range is lacking, leaving things looking washed out and dreary.

Display: Better than the best

When talking about the S20 camera it’s hard to avoid comparison to the Ultra, because the specs are so different, even as they’re marketing in much the same way. It’s a relief then to turn to the phone’s display, where things are simpler.

The S20’s screen is exactly the same as that in the S20+ or S20 Ultra. Just smaller. At 6.2in it’s about as compact as flagships get these days, but packs in a 3200×1440 resolution and 120Hz refresh rate, just like both the bigger phones in the range.

Much has been made of the quality of the S20 Ultra’s display, but for my money the regular S20’s is better. Yes, it’s smaller, but that’s a matter of taste, not quality. And the smaller size means those pixels are packed in closer together, for a pixel density of 563ppi. This thing is crisp.

That’s even more important once you remember that at launch you can’t run both the max resolution and the higher refresh rate. If you choose to use the 120Hz refresh – which I recommend for its smoother, more fluid feel – you have to drop to Full HD+ resolution. That looks much better on the S20’s tight display than it does on the sprawl of the Ultra.

I’ll keep things brief on 5G: it’s not good enough yet, but it might be within the next few years, so unless you upgrade annually I’d recommend at least considering the upgrade.

Availability depends on markets, of course. In the US the S20 is only available with 5G support (where it supports Sub-6 frequencies, but not mmWave), while in the UK you can choose between 4G and 5G models, with a £100 surcharge for the latter.

If you’re in a big town or city and think you’ll keep the phone for a while, it might be worth an extra £100 for the speeds down the line. If you’re in the countryside or change phones frequently, don’t bother.

What powers the phone also depends on market. In the US the S20 comes on Qualcomm’s flagship Snapdragon 865 chipset, while the UK and most other markets get a phone powered by Samsung’s own Exynos 990.

For most people the differences in performance won’t matter – Exynos delivers better single-core performance while Snapdragon uses multiple cores to greater effect – but anecdotally it looks like once again, Exynos models suffer when it comes to battery life, so bear that in mind.

The phone comes with 128GB of storage, and either 8GB of RAM for the 4G variant or 12GB for the 5G – another reason to plump up the extra cash if you get the choice.

As you’d expect, it’s fast, it’s responsive, and it matches most other similar phones both day-to-day and in benchmarks. There’s not a whole lot more to say than that.

I mentioned that the Exynos chips affect battery life. I’ve been testing an Exynos variant of the phone, and have averaged around 5 hours of screen-on time every day. That varies a bit depending on usage and the refresh rate & resolution settings – cranking either to max seems to take up an extra 5-10% battery life each day.

That’s acceptably battery life, but it’s definitely at the lower bounds of what I’d put up with for a phone this price, and I worry what it will drop to over a couple of years’ use. Snapdragon variants will probably last a little longer, but I haven’t tested one myself.

When it comes to charging, the included 25W charger will bring the 4000mAh battery from empty to 56% in 30 minutes, and to full in a little over an hour. There’s also fast (but not quite as fast) wireless charging if you prefer, and a reverse wireless charging option so that you can top up other wireless kit using the phone.

Software: Still the One

The S20 ships with Android 10 – as you’d expect – and running Samsung’s One UI 2.1. There’s not a whole lot that’s new here, but there are a few welcome touches – an AirDrop-esque file-sharing tool you can use with other Samsung owners, and an option for friends to connect directly to Bluetooth speakers through your phone.

There’s plenty of customisability, and an attractive design, though feature creep is beginning to set in, so you may find the OS a little unwieldy at first, unless you’re coming from a previous Samsung device. Read my S20 tips & tricks guide to make the most out of it if you’re not sure.

Yes, this is expensive. Yes, you could get similar performance for less elsewhere. But this is Samsung, and at this point you’ve got to pay the premium for the brand, just as you do with Apple.

And for the best, most balanced flagship Samsung’s made in years? It almost feels like a bargain.

The Galaxy S20 is the best phone in Samsung’s S20 series, and simply the best phone the company makes right now. It’s compact, powerful, and packs a versatile camera system that may not match the Ultra on zoom or detail, but it meets – and sometimes beats – it across the rest of the board.

5G isn’t quite there yet, but will be within the lifetime of this phone. And while battery life remains a slight concern, that’s really the only major fault here. The Android ecosystem offers more for less elsewhere, but usually without Samsung’s level of prestige or polish, and in this case I think that’s worth paying for.