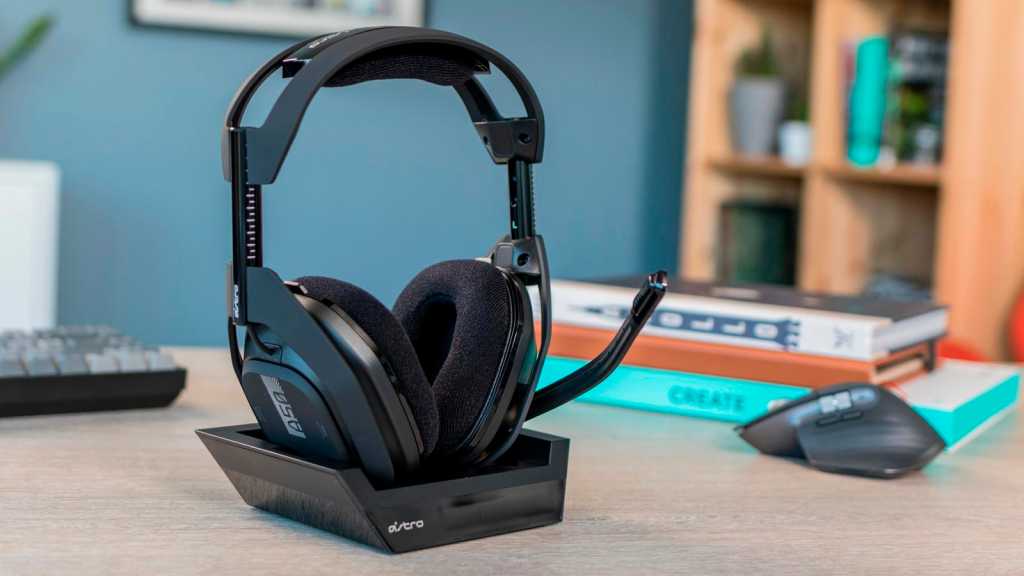 The Astro A50 Wireless is one of the most expensive gaming headsets on offer, but the features, build quality and Dolby-powered audio quality largely reflect the high price point.

With such an expensive price tag, is the Astro A50 Wireless worth it? I’ve spent a lot of time using the headset, and here’s what I think.

Astro A50 Wireless: Design and features

The Astro A50 Wireless is amongst the most expensive gaming headsets on the market at £299/$299, and that’s reflected not only in the design and build, but the variety of features available too.

The A50 Wireless consists of two components; a wireless headset and a USB base station, with the latter connecting to your PC or console and providing low-latency wireless connectivity. It’s a simple setup, but one that provides a truly high-end experience compared to most headsets available in 2020.

As well as acting as a transmitter and receiver, the base station also has the ability to wirelessly charge the headset; simply drop the headset into the dock when not in use and it’ll snap into place thanks to built-in magnets. Just make sure you’ve got it the right way around or it won’t charge at all! You’ll see a charging icon displayed on the dock – as well as current input source and the status of features like Dolby Audio – giving you a rough idea of current charge at a glance.

It’s worth noting that there are two versions – for PS4 and Xbox One respectively – and while PC users can connect to either, differing connection methods mean console owners will need to pick up the correct version for full functionality. While it was once pretty easy to tell the two apart, with the Xbox One variant sporting a bright green design while the PS4 variant opts for a more understated blue-and-black combination, the new-gen A50 Wireless comes in a single colour option: black and silver.

Whatever variant you go for, one thing is clear; the A50 Wireless has been designed to last. The headset is constructed from durable matte plastic and is held together with two metallic side pieces that add to the premium look of the headset. The headband itself is fairly flexible, allowing for wider head fits, and the earcups can be raised and lowered to find the perfect fit for your head shape.

It’s the headband and earcup cushioning that really completes the experience, offering a combination of breathability, support and a soft-touch finish perfect for longer gaming sessions. My only complaint is that the headset clamps around my head with more force than I’d like, and while it never becomes uncomfortable enough to take the headset off, it’s certainly noticeable over longer periods of use.

Without a wire for in-line controls, you’ll find a bunch of controls on the earcups of the A50 Wireless. You’ll find buttons to enable Dolby Audio, switch audio presets, adjust volume and even on-cup touch controls to adjust the game/chat balance on-the-fly, providing a lot of functionality without needing to boot up Astro Command Centre on PC.

Although not required for use, we’d still recommend downloading Command Centre on PC – the software allows you to make a plethora of adjustments not only to the audio output, but your microphone too.

The built-in microphone flips away when not in use, muting itself at the same time, and offers decent flexibility thanks to a malleable plastic stem. The problem is that it doesn’t protect from pops due to a lack of foam protection, and although it’s still decent enough for in-game communication, we’d expect something more from a headset with such a premium price tag.

In terms of audio, the Astro A50 Wireless features 40mm drivers that do a phenomenal job of creating an immersive Dolby Surround-powered soundscape. While audiophiles might scoff at the idea of virtual surround sound, the A50 Wireless does it incredibly well, providing close to an authentic surround sound experience with only two speakers.

How Astro has managed that, we’re unsure, but we do know that the audio engulfs you in the action, hearing shots whizz by your head as you return fire and the boom of artillery fire in the distance in fast-paced shooters. It gives you an advantage in competitive gameplay, allowing you to hear the footsteps of an approaching player with pinpoint precision.

It’s not just booming bass that makes the A50 Wireless great, although it really does pack a wallop. It’s the ability to recreate delicate tones and rich vocals that provide a real connection to the characters in more emotional, story-driven games – as long as the voiceover acting is up to scratch, anyway!

But while it really is the perfect audio experience when gaming, the same can’t be said about using the headset to listen to music. After all, at such a high price-point, you’ll want to use the headset for just about anything you do on console and PC, not just when gaming.

The quality isn’t bad by any means – it provides a solid music-listening experience and handles a variety of genres of music well – but it lacks the detail and clarity that you’d get from other headphones at a similar price, and the soundscape is dramatically reduced if you decide to disable Dolby Surround.

Astro A50 Wireless: Value for money

The Astro A50 Wireless is a great bit of kit, but there’s no denying that it’s expensive at £299/$299, especially when you consider the wired variant – the Astro A40 TR – is £50/$50 cheaper and offers the same core functionality. In fact, it’s one of the most expensive options in our selection of the best gaming headsets, with most high-end options capping out around the £200/$200 mark.

That’s not to say it’s not worth the money, but you should evaluate what you really want from the headset because, for the same price, you could easily buy a great pair of headphones and a streaming-level microphone. If it is the option for you, the A50 Wireless can be bought via the likes of Amazon and Astro in the UK along with Amazon and Best Buy in the US.

The Astro A50 Wireless is premium in just about every respect, from design and build to the features and audio quality on offer, and the price-tag reflects that.

The USB base station doubles up as a wireless charger, making sure your headset is always fully charged and ready to go when required, and the inclusion of Dolby Audio technology means audio is not only of great quality, but directional too. It immerses you into the game, improving your overall game experience and providing an edge in online shooters like Call of Duty.

The issue is that it costs a lot more than the majority of high-end gaming headsets on the market, and while the A50 Wireless is phenomenal, there are cheaper options that perform at a similar level.