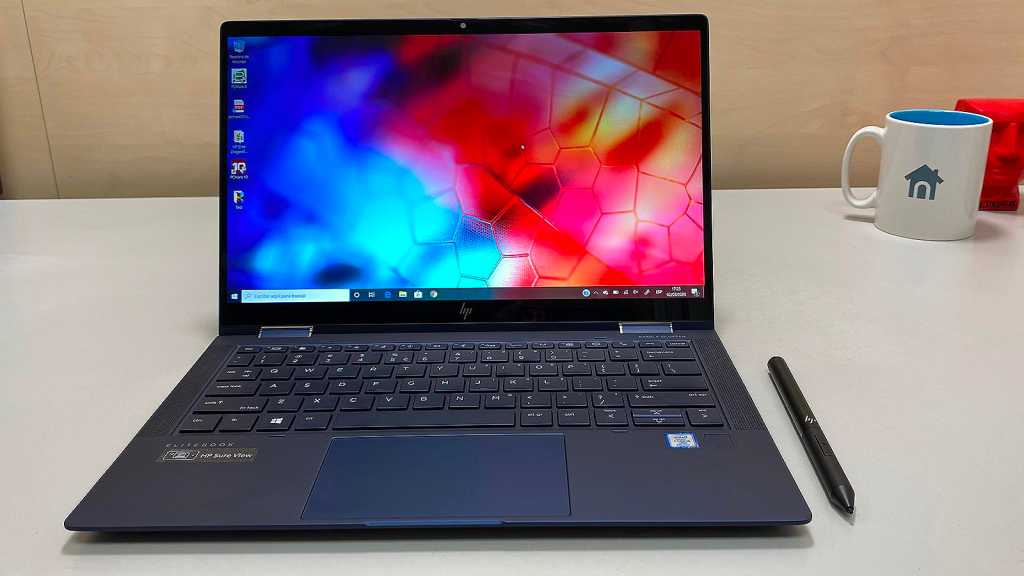 HP has achieved an impressive amount with the Elite Dragonfly combining stylish and versatile design with some impressive specs and useful business features. While there’s a lot going for it, it comes at a high price for an 8th-gen Intel processor and faces some tough rivals that are cheaper. Also watch out for the 2020 Dragonfly with 5G and Qualcomm chips.

It comes at a price, but the HP Elite Dragonfly aims to be the perfect convertible laptop by combining flexible design, a lightweight chassis, long battery life and useful business features. We find out if it can achieve all these things in our full review.

Like others, this convertible laptop is designed so that its hinges turn a 360-degree so you can use it in tablet mode, along with others, taking advantage of the digital pen when you like.

For the finish, HP uses CNC magnesium alloy materials instead of aluminum, in order to lighten the equipment, in addition to meeting the durability standards MIL-STD-810G. It’s impressively under 1kg in weight and our sample comes in a striking blue colour.

Although it is not the most premium material you can find in a laptop, it does have an oleophobic coating designed to eliminate fingerprints and dirt, and we found it works very well.

Once opened, the wide and comfortable keys are a joy to us, offering a short stroke of approximately 1.4mm, to which rubber material is added to silence each press. Basically, it is the system we saw for the first time in the EliteBook 1040 G4 and Elite x360 G5 that has given good results.

The 13.3in screen has reduced bezels of 4.75mm, while the upper one is 10.25mm in order to house the hybrid front webcam with IR functions which iscompatible with Windows Hello. The physical shutter of the camera is almost used for manual locking and ensuring privacy.

For design purposes, the speakers located on both sides of the keyboard making the size of the keys smaller than usual, which is joined by the large space left between them.

We would like to say that it compensates for this sacrifice, but unfortunately the maximum level of sound is not very high. Its system based on Bang & Olufsen speakers sounds good but at low volume levels, not especially noteworthy when watching video content among several people.

The IPS touch screen on the most basic model is Full HD (1920 x 1080 pixels). It is a very efficient panel of just 1W of power consumption to aid battery life.

A really interesting feature is the Sure View filter implemented by HP in its business range, whereby, with the press of a function key, it is possible to reduce viewing angles to ensure visual privacy when working in public places. In the image below, we see the laptop with a certain angle and the filter without applying.

Once the function key ‘F2’ is pressed, the laptop applies the HP Sure View privacy filter and this is the result.

We can confirm that it’s very functional, without the need to add additional external elements to the laptop, as many professionals do with filters. However, with Sure View you will have to work with maximum brightness, as darker areas are become hard to view.

The company points out that this is the generation 3 of this HP Sure View technology, and although the shaded areas are much less visible compared to previous generation laptops, the brightness level of the screen is still affected when it is not active.

HP tells us that there is the possibility of choosing the laptop model with a higher brightness that reaches 1000 nits (compared to 400) to help with this problem.

You can also choose a model with a 4K resolution if you like but the price rises considerably and will be overkill for most users anyway.

As you can see in the specifications of the Elite Dragonfly, the variety of processors is very wide, all of them from the 8th-generation Intel Corechips. Specifically, they belong to the U Series.

SSD storage options are a great combination between SATA and PCIe SSD memory, ranging from 128GB to 2TB, some of which have Intel Optane memory with FIPS encryption.

As far as RAM is concerned, it is possible to choose between 8- and 16GB of dual channel memory. It seems clear that with these amounts it is possible to deal with most situations in the consumer or business environment.

This memory is fixed on the motherboard, with an additional free socket that can be used by IT departments to expand if needed. It is one of the few updates that can be carried out.

To obtain conclusions on its performance, we must start from the fact that the current EliteBook Dragonfly range consists of different Intel Core processors, all of them belonging to the 8th-generation, when there are already computers with the ninth and tenth.

HP has plans to incorporate this new generation throughout the year. Meanwhile, the performance presented by the Dragonfly is even above the average of models with similar configuration, but isn’t the fastest on the market.

At the graphics level, we see that of the models available in the HP Store that you can buy are sold only with the graphics power of the Intel UHD 620 integrated chip, with no alternative to get a dedicated GPU. It’s likely that this choice is to ensure the longest possible battery life.

As it is possible to appreciate in the graph, in PCMark 10 we reached a score of 3,476, result that improves even to that granted by Microsoft Surface Pro 7 with similar Core i5-1035G4 processor and 8GB of RAM, whose value was 3,025.

With 3DMark we have taken the opportunity to measure the graphic capabilities of the Dragonfly Elite. It is not surprising that it does not stand out, but neither does it pick up the average performance of laptops that use UHD or HD graphics with which to face basic or elementary games.

Before moving on to the next section, we would like to point out that at all times the system is quite silent, even in situations where the CPU load forces the fans to rotate faster to be efficient with cooling.

Normally a laptop this thin and light it very limited on ports, often with simply USB-C and headphone. However, HP has managed to fit more than many rivals.

The Elite Dragonfly has two Thunderbolt 3 ports, perfect for connecting monitors and storage devices, along with a USB-A 3.1 Gen 1 port. There’s also a full size HDMI video connector and an audio jack combined with microphone and headphones complement the offer.

As usual within the HP EliteBook laptop family, the Elite Dragonfly comes with the latest in wireless connectivity, which now focuses on Wi-Fi 6 (11ax), just in time now that this new standard begins to take off along with compatible routers.

The highlight here, though, is the 4G LTE connectivity offered as standard with 4×4 MIMO antennas. According to the new vision of Windows 10 computers with always-on connectivity, data connection is essential for many users.

Some will miss in this professional range the presence of an Ethernet port, however, it does not seem so worrying since the speeds of the wireless connections have a good rate. It is also possible to use additional hubs if needed.

Speaking of security, the HP Elite Dragonfly has a fingerprint reader located in the lower right corner of the keyboard. This is the 3rd-generation of HP’s Multi-Factor Authentication.

It offers a great response, and you can use it in conjunction with the webcam and the Windows Hello feature to identify yourself and unlock the laptop. There are many security features implemented by HP, such as Sure Sense focused on detecting possible zero-day malware threats.

There are also options such as HP Sure Start, which helps the BIOS protect itself and recover from possible attacks or Sure Recover to recover disk partitions. Remote management and administration by an IT department is guaranteed thanks to Intel vPro technology, an extra that comes across the entire range, regardless of the model you choose.

Finally, note that the Elite Dragonfly is the first HP business notebook that is marketed with pre-installed WorkWell software, an environment for which the company deploys aspects of personal well-being, remembering to take breaks during use.

It is without a doubt one of the most interesting tests in this type of ultralight convertible notebook is battery life. To test it, we have played a 4K video in constant mode until the battery runs out with an average screen brightness of 120 nits.

The 1W power panel and its large battery prove to do a great job, as the Elite Dragonfly comes to offer a usage estimate of 8 hours and 43 minutes in streaming video playback mode. That’s some way off HP’s huge claim of 24.5 hours in Mobile Mark.

Exposing the CPU to more critical situations and taking it to higher stress limits, we observe that the autonomy times remain within the margins that can be expected, with acceptable values ​​and always exceeding the 5 and a half hours of use of the equipment.

Another advantage of these professional teams associated with a great brand is the possibility of acquiring guarantees with extended coverage. This is the case of HP Care Pack, with which support is guaranteed for 5 years with assistance on the next business day.

The most affordable model of the Elite Dragonfly on HP’s UK store is £1,618 and eBuyer has prices from a whopping £2,417 for almost the same model.

For a 2-in-1 convertible laptop aimed at professionals, the Elite Dragonfly meets the expectations of use, performance and battery life expected for the day to day of any worker.

Its built-in security measures, all aimed at safeguarding the business environment and worker privacy, are very consistent with the policies currently deployed by the vast majority of corporations.

HP highlights aspects such as Sure View. No other professional laptop on the market offers a similar screen privacy filter, but the technology suffers a little with the brightness of the screen we tested.

Note that this has older 8th-gen Intel processors when there are 9th or even 10th-gen consumer laptops available for less money and with better performance, if the business features of the Dragonfly aren’t worth splashing out on.

For the most part of battery life, design and versatility, we can not ask much more of this laptop. It does come at a fairly high price, though. The Acer Travelmate X5 is cheaper and Lenovo’s ThinkPad X1 Carbon has a lot going for it.

Check out the best laptops we’ve reviewed and the best business laptops too.