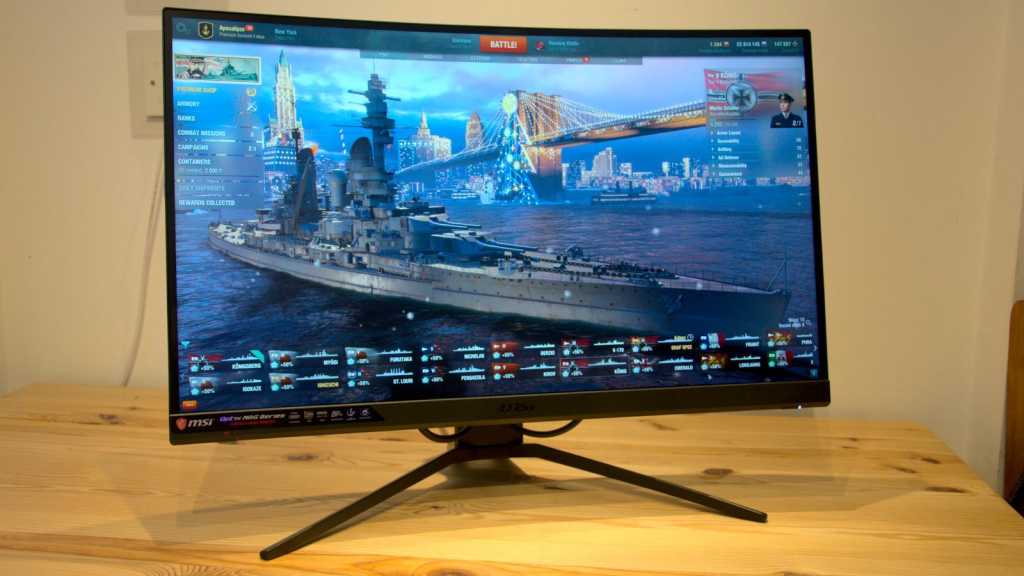 A sturdy construction, colourful panel and a reasonable cost should make the Optix MAG272CQR a popular choice for those looking for a curved gaming monitor. It isn’t proper HDR, but the variable sync mode works on both AMD and Nvidia and the LED lighting is a fun feature for those with illuminated systems.

The new Optix MAG272CQR model builds on that previous design with a higher 165Hz refresh, promises HDR and has a lower cost. With those lures set, is this the right gaming display to invest?

The MSRP for the MSI Optix MAG272CQR is £399 (or the same in US dollars), and that’s exactly cost that we found it on Amazon.com and Amazon UK. You can also buy it from Very in the UK.

This pricing compares well with many of the branded alternatives, although the Asus TUF 27in VG279WQ has a similar spec and can be found for less than £350 if you are willing to forego a USB hub and only have one input each of HDMI and DisplayPort. But that model is not generally available in the USA, even if it can be found in Europe.

In general, cheaper screens tend not to have the 165Hz capability or the 1440p resolution, or they’re not curved. Samsung has the 27in CRG5 design that sports 240Hz operation for a very similar price, but that’s only a 1080p panel, not 1440p.

In this respect, MSI has relatively few competitors for this exact spec but check our best gaming monitors chart for rivals.

When we unpacked the MAG272CQR, we discovered that it is cocooned inside two large polystyrene trays, and it comes with plenty of documentation about the best approach to removing and assembling the monitor. Having seen first-hand how easily some curved panels can be irreparably damaged, we’d follow these instructions, and mount the v-shaped foot to the panel before lifting the whole assembly out of the protective foam.

It requires just two screws to mount the vertical support arm to the panel, and a single thumbscrew attaches the base to that. While the screen only weighs 5.9kg, once the support is attached, the whole assembly is 13.1kg, enough to make positioning it across a desk something of a challenge for those who haven’t regularly exercised with weights.

A slight disappointment of the support is that it only moves vertically by 13cm and tilts between -5 and 20 degrees in the vertical plane. It doesn’t rotate for portrait mode, and more surprisingly, it doesn’t twist at all.

Where the support arm attaches to the panel there are four VESA 75 mounting points recessed into the back. Included with the screen are four hex-shaped standoffs to allow the screen to be wall-mounted or used with a custom support arm.

The only nod to cable management is a hole in the bottom of the support arm that can be used to bring all the cables to a common route and given the number of inputs that might easily be eight wires. All the cable destinations are in a cut-out on the lower rear left of the panel that has no cover or cable clips associated with it. The only input on the right is power.

One oddity is the welcome inclusion of a USB 3.0 hub, but the placement of both downlink and uplink ports on the very far left when facing the screen. As most gamers would use the two hub ports for their mouse and keyboard, putting them on the left does seem a curious choice given the statistics for those that are right-handed over left.

The designers surely knew this, because the joystick that controls the OSD menu is on the right.

The other noticeable aspect of the outside is the lighting scheme that MSI gave the MAG272CQR, which is part of a non-symmetrical arc across the back of the screen. We’ll talk more of this later, but it is very distinctive.

We also need to mention that instead of using some tiny speakers that would never be used by any respectable gamer, MSI chose not to include any audio other than a headphone jack.

But let’s talk about the panel. Surely the bit of any monitors that’s the most important.

As the resolution of a monitor increases, a panel of greater scale is required to experience those additional details when not uncomfortably close. 27in is not large enough for 4K viewing, and arguably too large for 1080p.

Where it slightly deviates from its MAG27CQ predecessor, is that where that unit had a 1800R curve, the MAG272CQR has a tighter arc of 1500R.

To understand ‘R’ curve, this is a radius of a circle that the monitor could create if you had lots of them organised around a single point. Therefore, in this instance, the centre of that circle would be 1500mm from the monitor. And, that’s the recommended viewing distance. As at this exact point, the sides of the monitor are the same distance as the centre.

For those curious, you’d need at least fourteen of these screens to form a complete circle given the degree of curvature.

One other interesting change is that where the previous design had HDMI, DisplayPort and DVI, this has just HDMI and DisplayPort with double the amount of HDMI inputs – so there are now two.

This choice reflects the number of customers using these panels with game consoles, and that to drive 1440p from a PC you are likely to use a video card that has DP and HDMI, not DVI.

The move to HDMI 2.0b is a welcome enhancement. As the standard 2.0 only supported 120Hz at 1440p, where 2.0b can offer 144Hz at that resolution. However, if you want to utilise the full 165Hz option, DisplayPort is the required connection technology.

In addition to the dual HDMI and DisplayPort, you can also connect this panel using DisplayPort over USB-C, and this USB-C port also doubles as a charging port for Type-C phones and tablets.

Input selection is via the on-screen menu that immediately shows you resolution, the refresh rate in Hz, the input, and if HDR or FreeSync is active.

What we liked about the joystick input that MSI uses is that while clicking the button brings up the whole menu mode, pushing the stick in different directions brings up fast sub-menus for selecting an input, game mode, screen assistance or even allows an alarm clock to be set.

A more complicated menu than the MAG27CQ offers, there are both gaming-specific modes plus ones that are clearly for more serious use. However, having a mode for ‘designer’ doesn’t equate to having Kelvin defined colour temperatures.

If you find even the joystick too fiddly, MSI has a Windows application that uses the USB connection to control all the options from the Windows desktop and allows special user-defined modes to be created and stored on the computer.

There are good things about this screen, and others that we wish were different.

Out of the box, colours are bold and punchy without any necessity to excessively tweak the settings. For those that only want to buy and screen and plug it in, this is ideal.

Where we started to have more issues was with the inclusion of ‘HDR Ready’ sticker and the ability to activate HDR modes. HDR Ready appears to be another marketing expression from the same creative mind that brought us HD Ready branding that inferred 1080p resolution TVs that in fact only offered 720p.

And, in this case, HDR Ready doesn’t mean this screen is an HDR certified display, it merely will accept HDR display data and make its best attempt to represent it.

But then as it only offers 300cd/m2 of brightness, no localised dimming and a static contrast of 1:3000, then true HDR was well beyond its remit. In the same vein as one swallow doesn’t make a summer, being able to select ‘HDR’ from the Windows 10 display settings does not convert the MAG272CQR into an HDR monitor.

The quoted colour gamut of this panel is 90% of DCI-P3 and 100% of sRGB, which won’t attract professionals working with colour, but is more than acceptable for gaming.

Our testing, using the new DataColor Spyder Elite 5.5 software revealed scores of 93% of DCI-P3 and 100% of sRGB, a slight improvement on the quoted numbers. It undercut the predicted brightness by about 30cd/m2, and the static contrast seemed closer to 1:1000. But none of this impacted on the overall quality score for the panel.

If this design has a technical weakness, it’s that the backlight is excessively skewed to the bottom left of the screen, although this is only apparent above 70% brightness. As that’s the default brightness, and works best for colours, the bright corner only becomes apparent if you boost the brightness to the maximum.

Overall, the Samsung VA panel isn’t the best we’ve tested or as fast as a TN technology panel for gaming, but it’s more than adequate for most PC gamers and their expectations.

The unwritten rule of gaming displays is that they must have an element of showmanship, possibly in notional deference to amusement arcades of the past. This hardware is no exception, and MSI has given it a dramatic sweep of RGB LED lights that go across the back of the screen – a little like Ambilight you find on Philips TVs.

It will provide some ambient lighting and when the monitor first powers up, it automatically cycles through a series of colour palettes, if the lighting mode is active on the OSD controls.

A Windows application is available from MSI called Mystic Light (above) that enables the lights to be controlled to a degree and even linked to in-game audio. For this utility to function, the USB hub must be connected to the PC.

Overall, the MSI Optix MAG272CQR is a decent upgrade over the previous MSI gaming solution, that increases the frequency range, offers greater display control, and now a USB hub. And, it’s cheaper than the MAG27CQ was at launch which is unusual for new tech.

Where we’d apply some caution is taking ‘HDR Ready’ to be something it isn’t and expecting the full 165Hz refresh without DisplayPort connection. You will be disappointed in both respects but hey, that’s what we’re here for.

It’s also worth accepting that with this curvature the users viewing distance is critical for the best results, but that’s generally true of all curved panels to some degree.

Ironically, one of the best features of this screen isn’t even an MSI initiative. It’s that Nvidia finally gave up on its G-Sync quest, allowing this screen to work through FreeSync with both Nvidia and AMD video cards that support variable sync.

Most gamers will have a card that can do this and being able to use variable sync at this resolution makes for a much more fluid playing experience.

Having the USB-C connection could be very useful for those with a gaming laptop and would reduce the cable clutter considerably for desktop machines that have a Type-C port on their discrete video card.

This monitor doesn’t set out to be the ultimate in high refresh pro-gamer equipment or a true HDR platform. But, if you want a curved gaming panel of this size without breaking the bank, it’s certainly a very valid choice and excellent value for money.