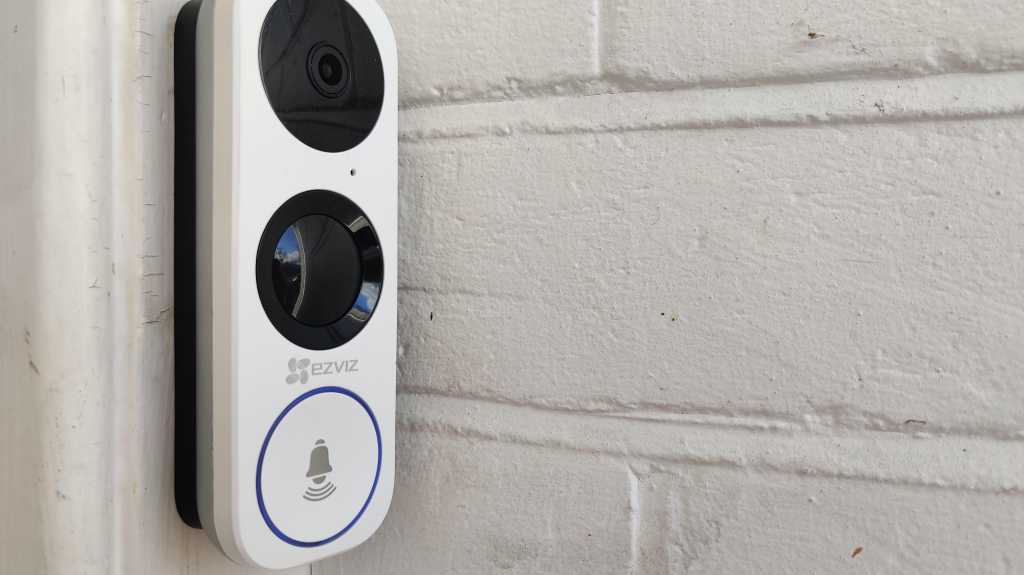 With an excellent feature set and great ease of use the EZVIZ Video Doorbell Cam comes in at a very competitive price. It’s a very good smart doorbell for your home and we recommend it. The only issue is the high cost of cloud storage for video footage, but that can be mitigated for with an SD card.

The EZVIZ Video Doorbell Cam is a smart doorbell. It is simple to fit and easy to use with the Ezviz app. The DB1 requires mains power and so needs a plug socket near your front door, and video can be recorded to a 128GB memory card or backed up to the Ezviz cloud service.

The EZVIZ Video Doorbell Cam is a 3MP Wi-Fi smart doorbell with an 180-degree vertical field of view, meaning you can see whomever is at your door via your smartphone. With two-way talk, and motion detection, you can speak with delivery drivers and callers wherever you are in the world.

It connects via Wi-Fi and is IP65 certified for protection against dust and water, and comes with both an SD-card slot and a variety of different coloured fascias. And with up to 5m of night vision, you really never need be surprised by a caller at any time of day.

Where to buy EZVIZ Video Doorbell Cam, and value

You can pick up the EZVIZ Video Doorbell Cam from major retailers including Argos, B&Q and Robert Dyas for £134.99.

This makes it considerably cheaper than either of Ring’s flagship products ( Doorbell 2 or Doorbell Pro), as well as the Nest Hello. But it’s somewhere in the middle of those flagship HD products and the budget devices such as the Ring Smart doorbell and the 360 D819 Smart Video Doorbell.

What does that mean in terms of value? Well Ezviz lacks the HD capabilities of the top-of-the-range models, which is not something that bothers me. And unlike the budget devices it runs off the mains and so doesn’t need recharging. It offers high end features such as the ability to notify multiple devices, and it looks the part. We’d say the Ezviz is well worth the money unless you demand high def video from your doorbell.

When we come to consider total cost of ownership things get a little less clear, however. There is a cloud recording option, but unlike the Ring products you can use an SD card and not pay for cloud storage. If you want to utilize the cloud, however, you will pay more.

Ring charges £24.99 a year to back up a single camera, Ezviz £49.99. That’s fifty quid per camera, every year. Or you could pay Ezviz £4.99 per camera for a seven-day plan which is expensive when you consider Ring costs £2.50 per month for 30 days for one camera or £8 per month for unlimited.

Finally we would also have to consider fitting. Ezviz offers an installation service, which for the DB1 starts at £68.50. It is literally a case of attaching to the wall and plugging in to a socket, but this may be something you need to factor in.

I did test the set up service, which is handled by TSG (the artists formally known as Maplins). For that reasonable price a very cheery and polite man called Scottie turned up at my house and fitted the DB1 in next to no time.

Given that it required only the transformer to be plugged in to an existing socket and a hole being punched through the door frame before the device could be affixed to it, and that I didn’t have an existing mechanical chime, I would easily have handled it myself. But the service was great: Scottie changed the cable for a white one that matches the skirting board, which I definitely wouldn’t have done. And knowing that the operative won’t leave until everything is set up and working well will be a service worth paying for in many cases.

Once plugged in set up was a cinch. Once powered up we opened the app and scanned the barcode sticker helpfully appended to the doorbell. The rest is simply a case of following a simple wizard: basically, hooking up the EZVIZ Video Doorbell Cam with the Wi-Fi. And away we go. As with all Ezviz products we have tested, the user experience is good.

The only minor trickiness was in enabling the doorbell for all users in the house. Because prior to this install I had used the Ezviz app for multiple cameras around the house, but also have other cameras, my wife had just logged in to the Ezviz app with my details or used Alexa to control them. This is fine on an ad hoc basis, but not when using a doorbell which is critical and frequently in use.

It wouldn’t have been a problem if this was our first Ezviz device. And the solution is simple and intuitive, but worth reiterating here as it wasn’t clear from the instructions.

With some phones, including my wife’s Samsung Galaxy S10, we had to change the app settings to ensure that the Ezviz app was able to send alerts all the time rather than being asleep in the background. This is obviously rather important – you still want to hear the doorbell even when your phone is in Do Not Disturb mode. The Ezviz DB1 does have its own ambient chime which is plenty loud enough, but that isn’t the point.

EZVIZ Video Doorbell Cam in use

I’m very happy with the EZVIZ Video Doorbell Cam. When someone rings the doorbell my phone rings and I get live video footage of what is occurring on my doorstep. Two-way conversations work well and are a great way of avoiding unnecessary trips to the post office.

You can set the sensitivity of alerts so that – in my case – I am alerted when someone steps on the porch, but not whenever anyone passes the house. And at any time you can get a clear picture of what is happening out front.

Video footage of visitors to the front door is available almost immediately and the pictures and video are clear. Night mode works well, although we have lights out the front of the house and clearly the picture is better when floodlit.

And in our experience the system is reliable. It’s been up for a few weeks now, during two major storms and lashings of wind and rain. Service has been seamless throughout.

A full feature set in an easy to use and set up device, the EZVIZ Video Doorbell Cam is a very good smart doorbell – particularly for those with existing EZVIZ devices and Amazon Alexa in the home.

With an SRP of £134.99 it is considerably cheaper than the Ring Doorbell 2, even accounting for its QXGA resolution failing to match up to the 1080p Ring.

The sting in the tail is in the price of cloud storage: £49.99 per year per camera is not cheap, although you could add a 128GB SD card for a fraction of that cost.

Check out our chart of the  Best Smart Doorbells.