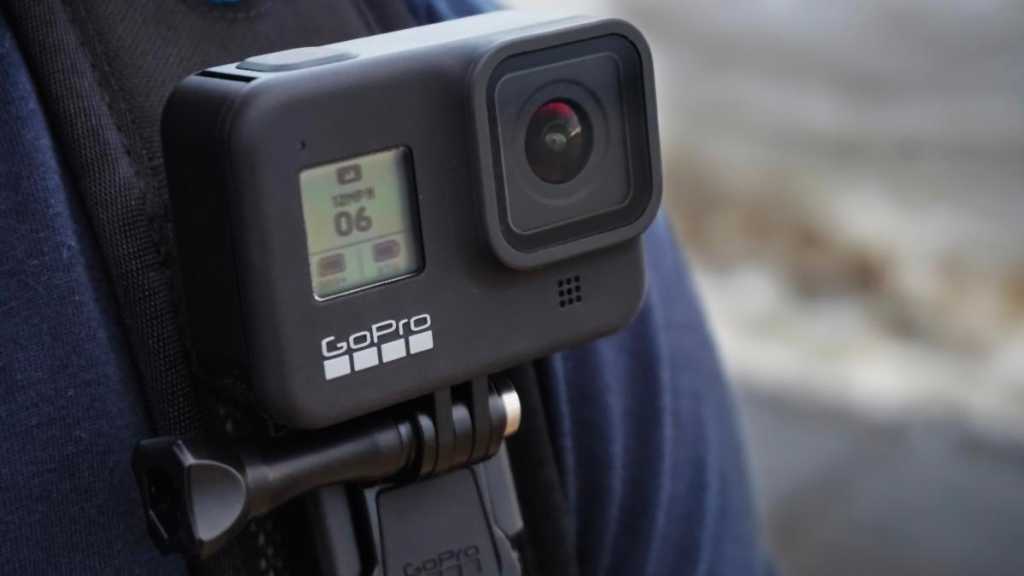 An excellent refinement on its predecessor that expands on some of the Hero line’s most powerful and unique features, with the likes of TimeWarp 2.0 and Hypersmooth 2.0 being particular highlights. There’s room for improvement with regards to low light performance and other aspects of image quality but the sheer versatility of the Hero 8 Black, plus the addition of the powerful new Mods ecosystem, makes it hard to consider other action cams around this price point.

The latest entry in GoPro’s ongoing line of class-leading action cameras takes the form of the Hero 8 Black.

This generation’s Hero looks and feels like a general refinement over its predecessor but also incorporates compatibility with a new line of dedicated modular accessories that pull focus in a new direction.

In the UK, the Hero 8 Black is available from GoPro’s website directly (where they’ll throw in a free 32GB SanDisk Extreme microSD card), as well as the likes of Amazon, Currys PC World and John Lewis. In the States, Amazon US and BestBuy offer the 8 up too.

As usual, the arrival of a new top-tier GoPro pushes the price of the rest of the range down, so even if the Hero 8 Black is too rich for your blood, there should be an action camera within GoPro’s current portfolio that better complements your budget. The base Hero 7 Silver, which tops out with 4K video at 30fps, costs £199.99/US$199.99, while last generation’s Hero 7 Black now drops to £319.99/US$329.99.

Why not check out our ‘ Best GoPros 2020 (and alternatives)‘ feature for more on the latest action cams.

Ever since the Hero 5 Black dropped the need for an external enclosure, every GoPro (aside from the Max) has sported a decidedly similar appearance. For the most part, this is a good thing, with cross-compatibility across multiple generations of GoPro, when it comes to mounts and accessories.

The Hero 8 Black doesn’t stray far for the path either, but there are at least a couple of notable changes. Firstly, the removable battery door is hewn from a piece of black anodised metal that spans the height of the camera’s body. The new latch mechanism at play is easier to operate than previous models, while the new clasp mechanism feels as sturdy as ever, if not more so.

A trait shared with its launch partner, the Max, the Hero 8 also showcases fold-out ‘fingers’ – an integrated means of attaching the camera to GoPro’s mounts, without the need for an additional enclosure or surround.

Both the foldable prongs and the battery door are replaceable, should they break off somehow during use, however, the latter has to be removed if you plan on using the camera’s new Media Mod. By doing so you sacrifice the Hero 8’s waterproofing (up to 33ft/10m) but gain a protective cage that integrates two hot shoes, a 3.5mm external microphone connector, an external USB-C connection and a microHDMI port. The mod also adds front and rear-facing shotgun microphones, which you can control the bias of at capture.

Paired with the Display Mod, which adds a front-facing full-colour LCD and the Light Mod, which features a bank of controllable LEDs, it’s clear that GoPro sees the Hero 8 Black as more than just another action camera, offering a potential sidestep into vlogging, presenting and broadcasting.

Back to the Hero 8 itself and the only other design tweak of note is a new, more pronounced microphone grille on the front, which covers one of the camera’s three microphones. They’re collectively used to leverage a new wind-noise reduction algorithm and in most cases, beyond extreme speed or headwinds, will allow for voice capture with minimal distortion.

The main hook of the Hero 7 Black was the introduction of the company’s ‘gimbal-like’ HyperSmooth stabilisation. With the Hero 8, HyperSmooth 2.0 is now in the mix. The first-generation tech was already impressive, here, it’s near enough unbelievable.

The real kicker is that the feature is now supported across the camera’s full gamut of resolutions and frame rates (despite the 8 being powered by the same GP1 chip as the 7) and if you want even more stabilisation, there’s also a ‘Boost’ button that’ll work at up to 4K/30fps, at the cost of a more heavily-cropped frame.

To round out the stabilisation game, pairing footage with GoPro’s mobile app also unlocks Horizon Levelling, which is so good, you can throw the Hero 8 in the air and the footage will still look as though it’s been shot sat on a flat surface.

The new LiveBurst feature lets you pull the perfect 8Mp or 12Mp still from three seconds of action, or you can export the full 4K clip in an instant. It’s a small addition that I struggled to find a use for but might appeal in certain situations.

Navigating to video mode and the Hero 8 Black comes with a gamut of presets covering various resolutions and frame rates, suited to different use cases, such as Activity (2.7K at 60fps with the ‘SuperView’ digital lens), Slo-Mo (1080p at 240fps with the Wide digital lens) and Cinematic (4K at 30fps with the ‘Linear’ digital lens). You have customisation over these and can then set up your own if you wish, granting users more on-camera personalisation than ever before.

Beyond the excellent stabilisation, footage quality is fantastic, for the most part, especially at higher frame rates where motion blur is reduced and detail increases. At 2.7K and 4K you have the option of obtaining the highest quality video output ever on a GoPro, with a 100Mbps bitrate (under the Protune menu – it’s not enabled by default).

Low light performance is still a challenge for the Hero, with dark areas of frame in high-contrast settings and general footage quality when shooting in dark environments turfing up artefacts, noise and grain. Footage is still more usable than ever before but it’s a clear area for improvement that GoPro should focus on with future generations.

This trait is far less of an issue where the camera’s time-lapse modes are concerned. Dynamic range is far wider when shooting time-lapses compared to video, granting you a better-exposed, wider dynamic range end result with better colour representation too.

You can choose between Time Lapse, Night Lapse and TimeWarp, with the first two serving as variations on a theme. Night Lapse is better suited to low-light environments because it raises the minimum capture intervals to four seconds (rather than a baseline of 0.5 seconds). It also features an ‘Auto’ mode, which decides on the appropriate interval capture based on the total capture time.

Then there’s the more dynamic TimeWarp mode, arguably my favourite mode on the Hero 8 Black, period. It produces beautifully stabilised time-lapse footage at up to 4K resolution, with the added benefit of being able to toggle the effect on and off in real-time. This simplifies what would be a tricky speed-ramping editing technique during post-production, into a simple one-button operation during capture.

With the Hero 8 Black, GoPro introduced a new 1220mAh battery (AJBAT-001). At first glance, a new proprietary cell like this seems annoying, considering the company already sells a unit (AABAT-001) that’s the same dimensions and capacity, however, this newer model (denoted by the blue accent around its contacts) is what’s needed to unlock some of the Hero 8 Black’s more advanced features, like Hypersmooth 2.0. 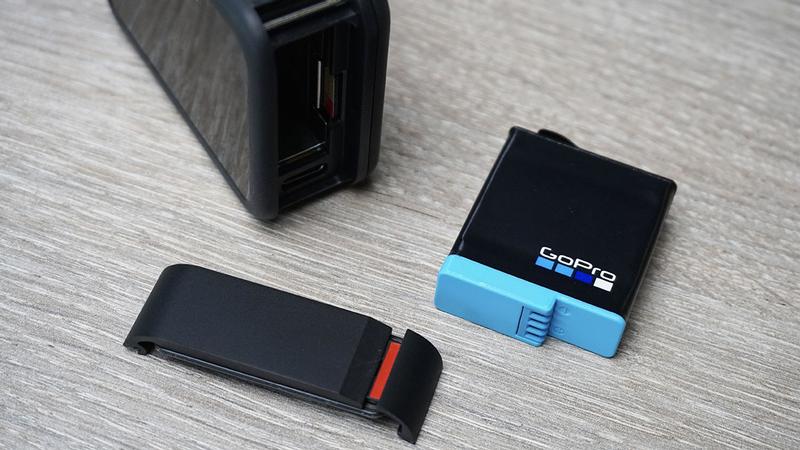 Confusingly, while GoPro states that the older 1220mAh battery isn’t compatible with the 8, customer service confirms that such units will still power this latest camera, however, some features (including Hypersmooth 2.0) may not work properly or at all. This also might explain why, of all the features in the Hero 8 Black, Hypersmooth seems to have one of the biggest impacts on battery life.

With an unchanged capacity, usage produces similar results to the Hero 7 Black, with longevity clocking in at around 50 minutes when shooting 2.7K resolution video and up, continuously (it lasts longer at lower resolutions). Meanwhile, a recharge takes upwards of three hours (unless you have GoPro’s dedicated battery charger), so it makes sense to invest in at least one spare if you’re planning on a heavy day of shooting.

As mentioned up top, the Hero 8 Black builds on the features introduced with the last model and ups the ante by way of abilities like Hypersmooth 2.0 and Horizon Levelling to cement itself as the action camera of choice.

There’s still obvious room for improvement with regards to low light performance and image clarity, but the skillset that this little camera offers is unparalleled right now and that’s before you consider the addition of those Mods.

Hopefully, GoPro will add even more Mods into the mix during its life cycle but even in its current guise, if you can get past the asking price, there’s little else out there that comes close to the Hero 8 Black.