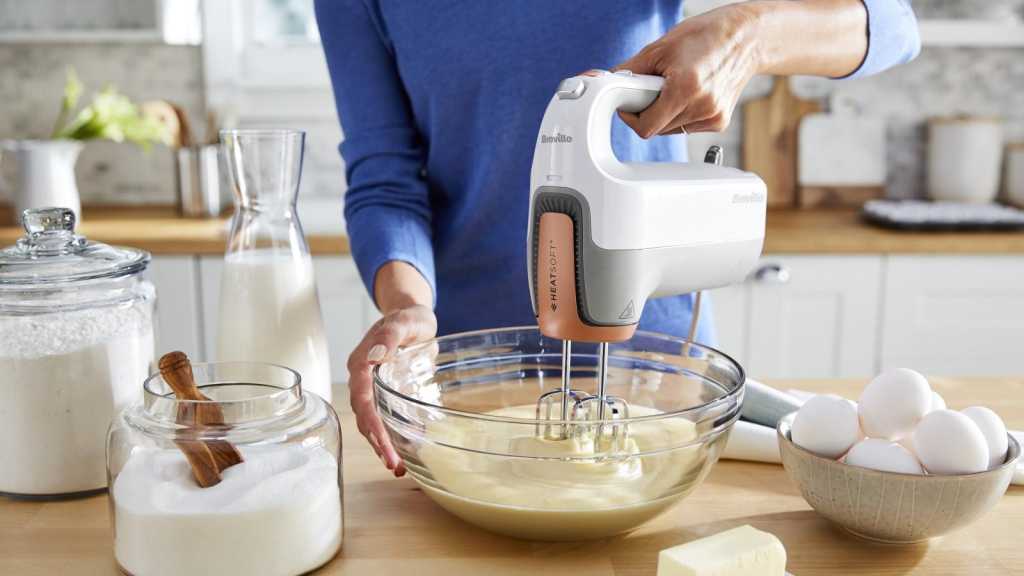 This is a nicely-designed hand mixer with some useful features but it’s the heat technology that really makes it. It would be a great purchase for people who bake often and want to be able to do so spontaneously.

The Great British Bake Off is back and if you’re in the mood to recreate some of its ‘in-tents’ magic at home, you may be looking for a new hand mixer. If you’ve seen previous winner and Breville ambassador Candice Brown using the HeatSoft, you may be wondering if it actually works. Read on to find out what we thought.

The HeatSoft’s USP is obviously the technology that allows you to use butter or other chilled ingredients straight from the fridge in your baking. But it’s got some other nice design elements that make it worthy of a place in your baking arsenal. 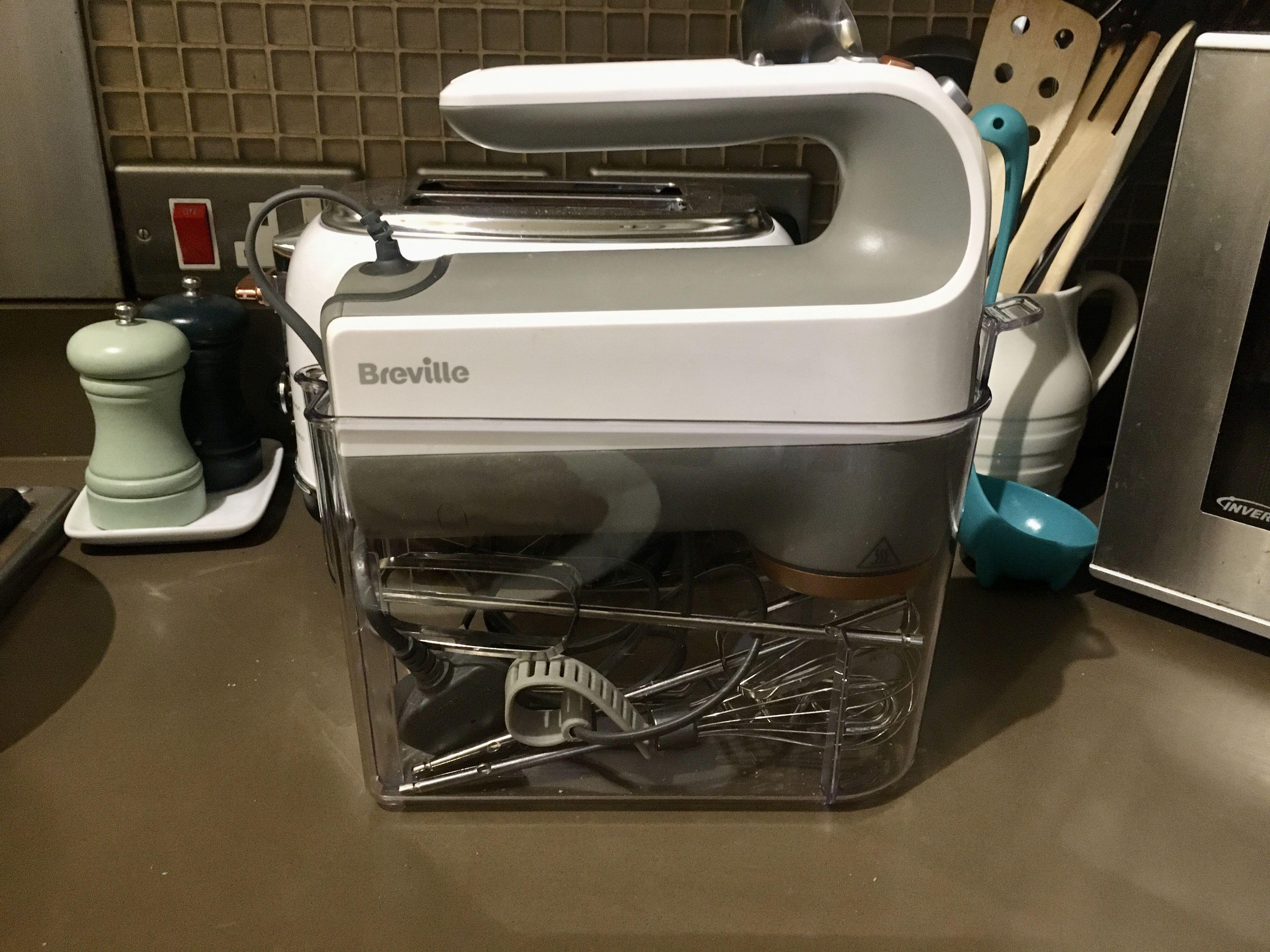 The HeatSoft is a hand blender that comes with beaters, dough hooks and a whisk. One of its very useful features is the accompanying clear storage case. All of the attachments fit inside and the blender slots into the top. Now that we’ve seen this, we’re wondering why other manufacturers of blenders, mixers and other items with multiple small, annoying parts that get lost in the cupboard haven’t come up with a similar solution.

The blender itself is slightly heavier than others of its kind, perhaps because of the HeatSoft technology. For us, it wasn’t enough to make a difference but if you use a hand blender regularly and think a bit of extra weight would bother you, it’s something to take into account.

There’s a magnetic nozzle on the front of the blender that you can remove and stick in the dishwasher for easy cleaning. This is great in theory but the HeatSoft technology requires vents in the same spot. This negates some of the usefulness of the removable section and means that the front of the blender could still require careful hand cleaning as it can’t just be wiped down.

This could be an issue if you were using it to blend liquids – with droplets getting caught in the vents. However, after using it several times for baking cakes and making bread, we’ve had no problems.

There’s another nice feature, which is the HeatSoft’s flat base. This allow you to pause while you’re mixing and stand it on its end instead of laying it down on the counter. 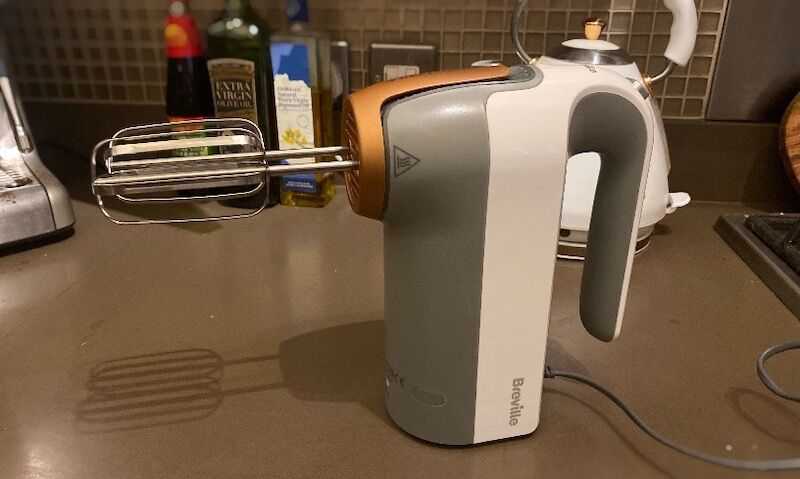 The HeatSoft has a choice of seven speeds and a power boost button. At 270W, it’s not the most powerful mixer but we tested out all of its features and it coped easily with tougher tasks like dough-making.

Of course, the major selling point of the HeatSoft is its heating technology. It produces warm air from vents at the front of the mixer, between the beater attachments. It’s not as powerful as a hairdryer – it won’t blow flour all over the place. What it will do is quickly bring your refrigerated butter up to room temperature, softening it without melting it completely.

We used the feature more than once while baking cakes and it worked perfectly. The HeatSoft blurb claims that it softens butter 12 times faster than leaving it out to reach room temperature.

This seems a bit meaningless – as though we’d say, “Oh what a shame. I could have done with something that heats up butter 13 times as fast”. We’re not sure why the manufacturer felt the need to put a figure on something like that.

What we can say is that you can use butter straight from the fridge. The heat will soften it more or less straight away – certainly quickly enough that your mixing process won’t be affected. Nor will the quality of your baking products. Cakes and biscuits made using the heating function had a great consistency.

There’s another handy hack – if you get mixture caught up in the beaters, you can use the heating technology in conjunction with power boost button to free it almost instantly.

The handle design takes a while to get used to as there are a number of buttons in close proximity. As well as the speed control, there’s the power boost, the heat control and the button to instantly eject the beaters. Did we sometimes boost the power when trying to heat the butter, or drop the whisk into the baking mixture instead of turning up the speed? Yes. Yes, we did. Quite often.

The HeatSoft is widely available. Its RRP was £69.99 but most retailers are now selling it for approximately £49. You can buy it from online shops including Currys PC World.

This hand mixer gets a thumbs up from us. Not only does the heat technology work, but the variable speeds, boost button and storage case all add up to a well-designed appliance that would be useful in any kitchen.