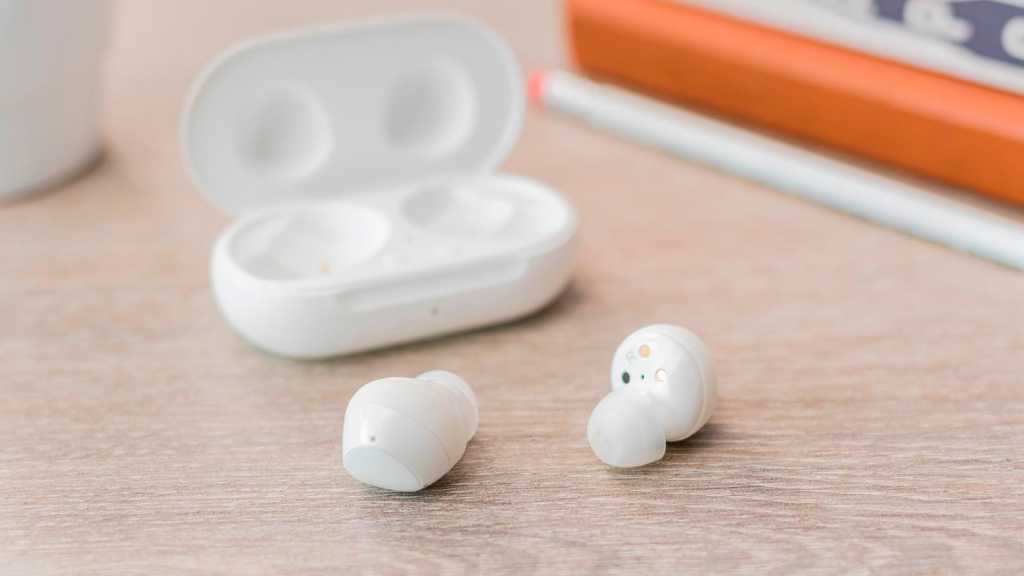 In a sense, the Galaxy Buds+ don’t add much. The same design, similar sound, and a couple of software tweaks. But the original Buds were already a great true wireless option, and those minor adjustments make them even better. The real sell here is the battery life on the buds though. 11 hours’ playtime is basically the best around, and fast charging for the buds and wireless charging for the case make them easy to top up too. I’ve never worried less about battery on any wireless headphones.

Outside of techie circles, the Samsung Galaxy Buds never picked up anywhere near the same cultural cachet of the AirPods, or even true wireless rivals from Bose or Sony, but with the new Galaxy Buds+ perhaps that’s set to change.

With best-in-class battery, wireless charging, and a compact case – not to mention solid sound – these are among the best true wireless buds you could ask for – even if your phone isn’t a Samsung.

Samsung’s next wireless earbuds will be the Galaxy Buds Pro.

The Galaxy Buds+ clock in at a fairly competitive £159/US $149 – a little more than the originals’ £139/$129 price, but still better than most comparable rivals. If you get in early enough, you can get a free pair as a pre-order bonus with a Galaxy S20+ or S20 Ultra, and you can’t get a much better price than that.

For reference, Apple’s second-gen AirPods cost £159/$159 – and jump to £199/$199 if you want wireless charging to match the Buds+ – making Samsung’s offering feel affordable. The AirPods Pro cost even more at £249/$249, but they offer active noise-cancelling, which Samsung still doesn’t.

The main challenge for the Buds+ in terms of price is that if you dive away from the phone manufacturers and look at smaller audio brands, you can get fantastic true wireless headphones we’ve reviewed like the Cambridge Audio Melomania 1 or RHA TrueConnect for less without compromising on quality. 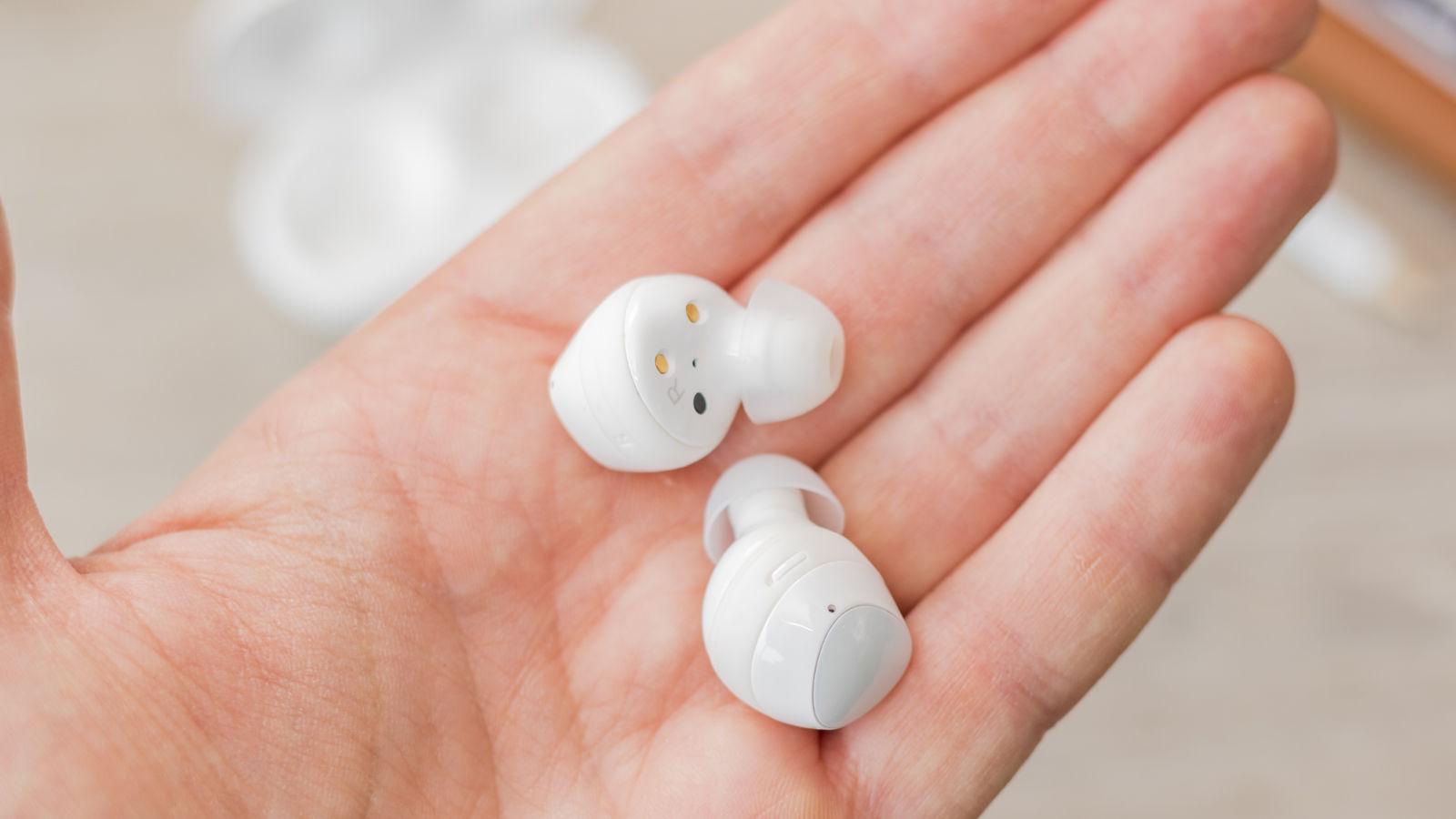 In fact, the headphones themselves are identical year-on-year: compact almost-circular buds with a pearlescent, rounded triangle touchpad on the exterior. They’re 6.3g per bud now – up from 5.6g last year – but that reflects updated internals, rather than any changes to the design.

That does mean one minor downside has carried over: because the touchpad covers most of the outer side, it’s quite hard to move them in and out of your ears without accidentally tapping it, and I have still not figured out the knack of putting them in without repeatedly pausing and playing my music along the way.

As before you get three options of silicon tip, along with three sizes of wing, which makes it easy enough to get a good fit if you’re happy to spend a few minutes trying different combinations out. It is worth noting that these run a little small though – I had to use the largest set of tips, which I never do on other earphones, so if you know your ears run big it might be worth trying these out before committing.

The original’s black and white finishes are back again, but instead of yellow there’s a slightly more restrained ‘cloud blue’ option. They all come with IPX2 splash resistance – so they’ll handle rain or a bit of sweat if you’re running, but they’re not build for serious exercise and you probably shouldn’t wear them in the shower. 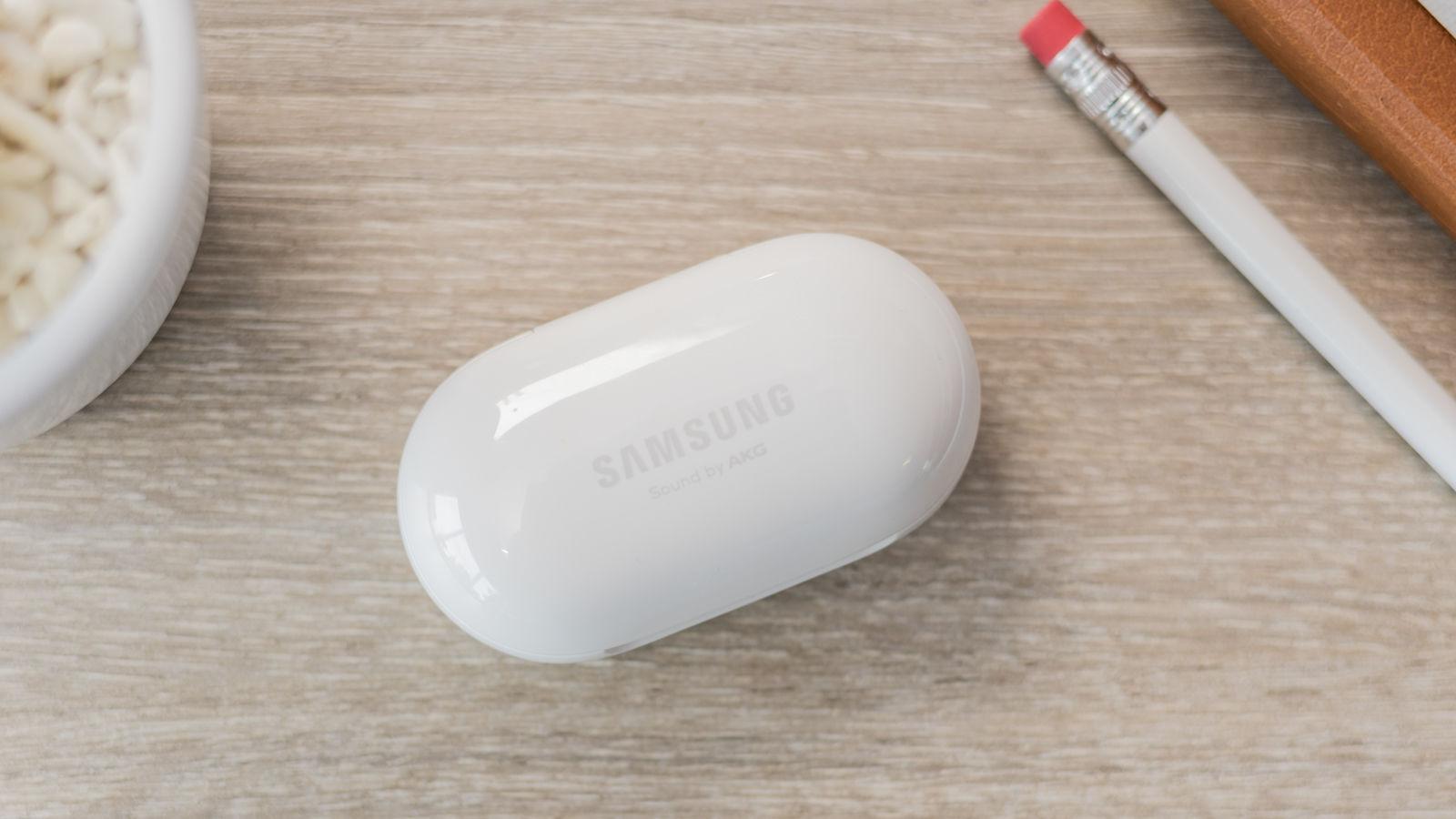 As for the case, it’s also exactly the same size and design as last year (and so one of the most compact around) though for some reason Samsung has swapped the matt finish on the original case for a glossier look that I’ll admit I’m not a fan of – though this is really nitpicking now.

So on the outside, the Buds+ are literally just a shinier version of last year’s model. But what does that extra 0.7g weight per bud get you in return?

Samsung has nearly doubled the earbuds’ battery life, from six hours up to a whopping 11 – not counting the case, which holds another full charge. Add them together and you get 22 hours of battery in total.

That total number is impressive, but it’s the 11 hours on the buds themselves that really count. That is a full-day battery whichever way you look at it: in my testing I turned them on at 9am, tried to use them as much as I could all day without putting them in the case, and still found myself going to bed at midnight with 20% battery left in each headphone – even as my Galaxy S10 had dropped to 2% over the same time frame (I’m going to take the mature approach and not use this as an excuse to rag on the S10 battery life). 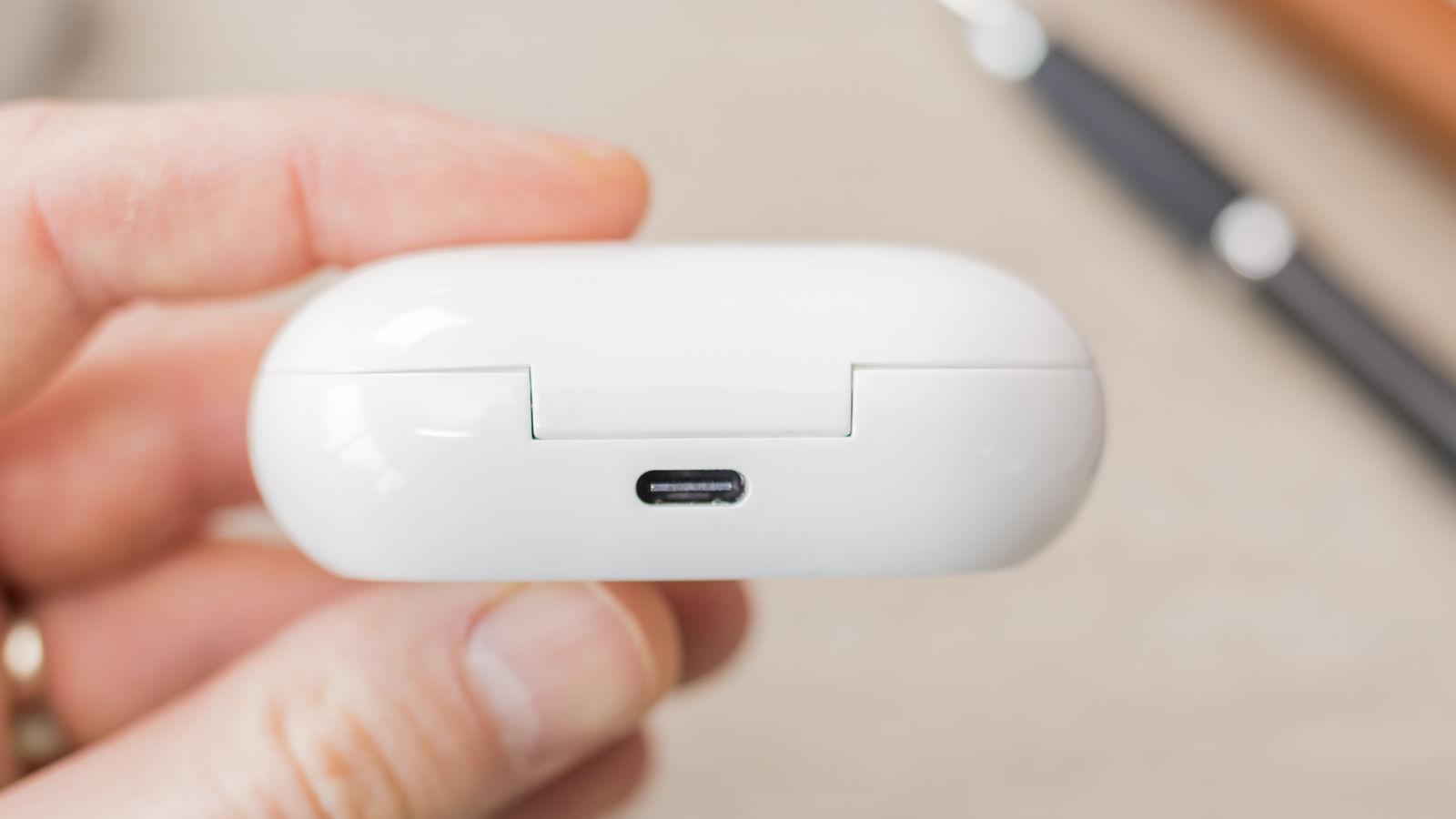 Quick charging makes those numbers even better, as just three minutes in the case should get you an hour of playback time. And the case itself can charge by USB-C or wireless charging, making it super convenient to keep topped up.

Two separate colour-changing LEDs on the case let you know rough battery levels for the buds and the box respectively, but you’re probably better off using the accompanying Galaxy Wearable app for that.

This gives you battery info for each bud, an equaliser, ambient sound controls, and the option to customise what a long press on each bud does – with options to trigger a voice assistant, change the volume, turn ambient sound on/off, or open Spotify and automatically begin playing the last playlist you used.

One massive change from last year is that the new Galaxy Buds+ iOS app supports almost all of the above – the only things lacking are the Spotify integration, reading notifications out loud, and a low-latency gaming mode. Last year there was essentially no iOS app support for Buds, locking Apple users out of control customisation, battery info, and the EQ. That made them a pretty useless option for the few people who might have considered them together with an iPhone, and it’s good to see Samsung improve matters somewhat. 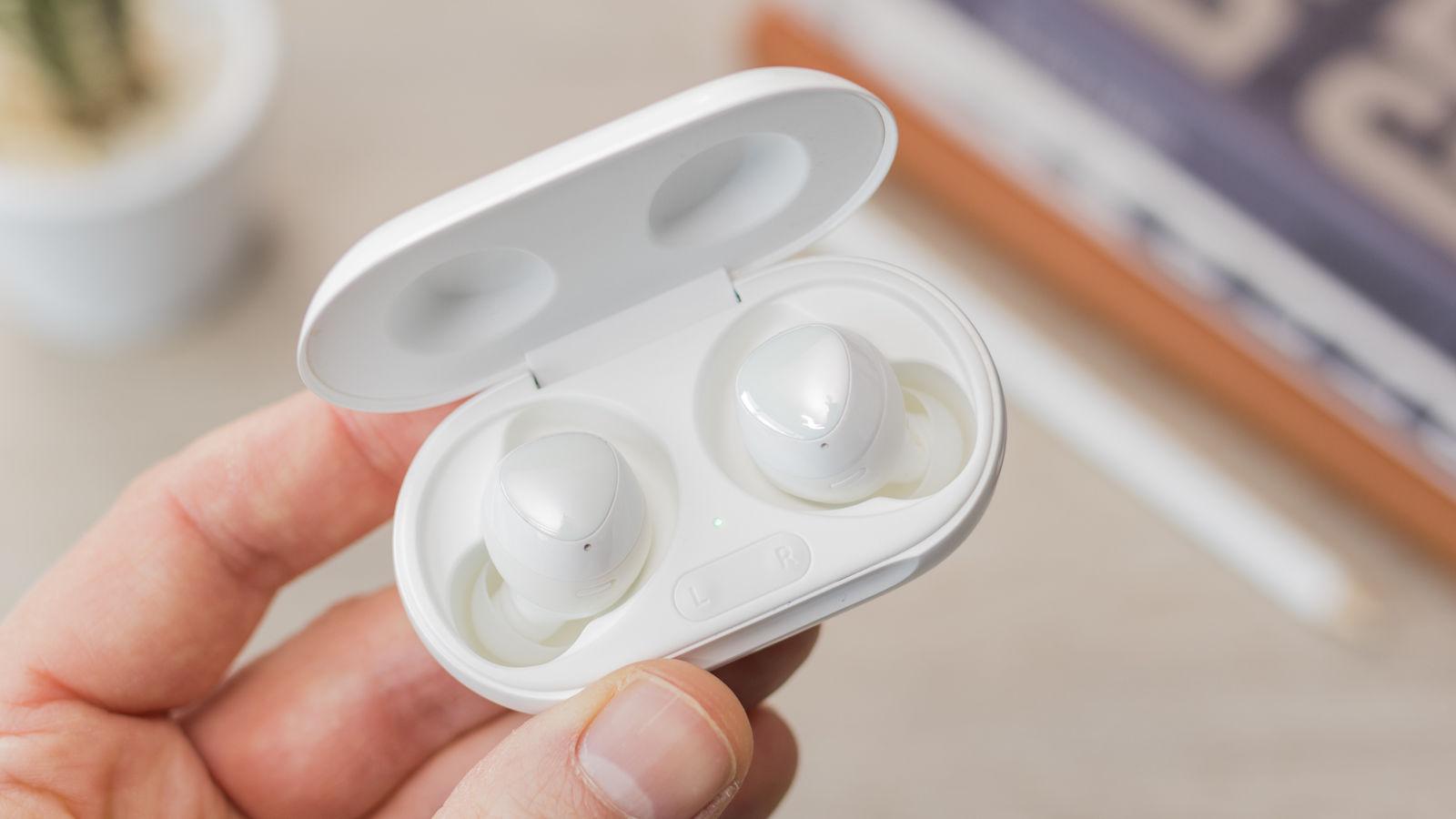 The app is especially important for that equaliser. I was pretty disappointed with the Buds+ sound out of the box, but it turns out it’s just a fairly flat default sound profile. The app gives you five others to choose from, from bass and treble boosts to clear, soft, and dynamic – my personal favourite.

Even across these profiles the Buds+ sound profile doesn’t change too dramatically, and it’s clear that Samsung designed these buds to suit a variety of tastes and genres thanks to a fairly balanced soundscape. Even with bass boost on these probably won’t satisfy anyone obsessed with the low end, but otherwise they should suit most purposes.

There’s no active noise cancellation, but at this price I don’t mind. And to honest, the tips have a good enough seal that I didn’t really miss it – they block most outside noise out anyway. The ambient mode works well too, using built-in mics to boost outside sound and let you hear what’s going on around you – it’s a testament to the passive noise isolation on these that I did find myself relying on ambient mode every time I wanted to order a coffee without taking the buds out.

In a sense, the Galaxy Buds+ don’t add much to the originals. The same design, similar sound, and a couple of software tweaks. But the original Buds were already a great true wireless option, and those minor adjustments make them even better.

That’s burying the lede though, because the real sell here is the battery life on the buds. 11 hours’ playtime is basically the best around, and enough that you’ll struggle to run the Buds+ down before wanting to pop them back in the case anyway. Fast charging for the buds and wireless charging for the case make them easy to top up too, and the result is that I’ve never worried less about battery on any wireless headphones.

I could find small things to complain about – the glossy case, the fiddly touch controls, the lack of AptX audio codec support – but ultimately the Galaxy Buds+ are great. And this time around, they’re great no matter what phone you use them with.