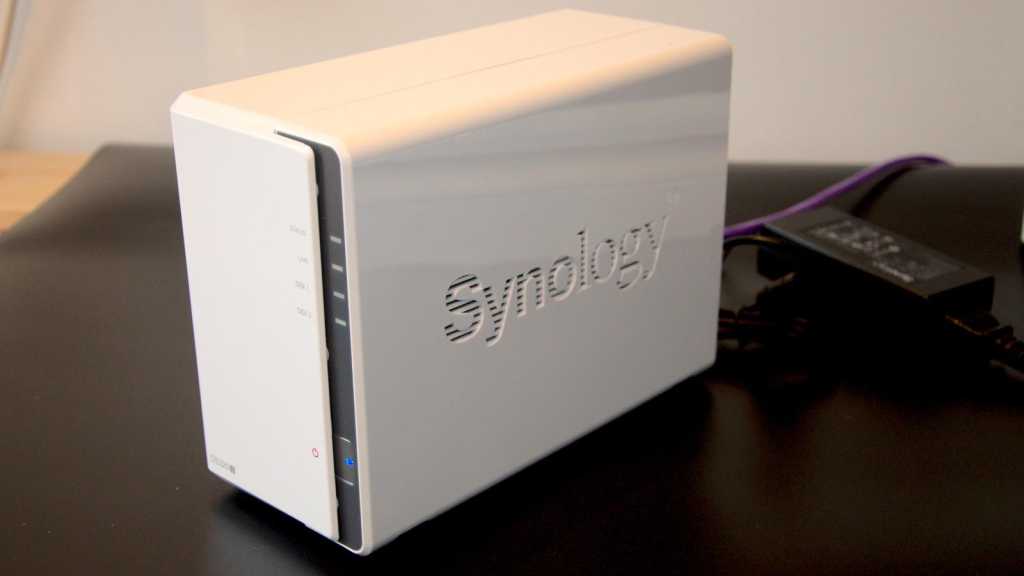 The perfect device to sync files from multiple computers and distribute media around the home. The extra processing power and DDR4 memory elevate network write performance, but the amount of RAM isn’t enough to fully exploit the excellent range of applications.

We believe that a dual-drive NAS system is the starting point for anyone that wants a home or small business server. Because single drive solutions don’t offer a drive redundancy option, like mirroring, to give the system some resilience against drive failure.

And, for those in the market for a low-cost NAS solution, the Synology DS218j has been an obvious choice for the last two years. It delivers a simple to deploy, yet powerful NAS platform in a neat and discrete package.

With the new DS220j, Synology is looking to maintain market share by providing an uprated machine at roughly the same price as the hardware it replaces.

Is there any good reason why you wouldn’t buy the Synology DS220j DiskStation?

That makes it only £10 more expensive than the previous DS218j on Amazon, and in the USA it is cheaper than the older model, amazingly.

While Synology customers have become familiar with playing a little extra, it is worth mentioning that the DS220j is a little more expensive than the TerraMaster F2-210 and the WD My Cloud EX2 Ultra, that both come with 1GB of RAM. And, Buffalo offers the LinkStation 220D in Europe for less than £80 with only 256GB of memory.

But in defence of this product, the cost of the DS220j reflects well the hardware on offer and the impressive DSM platform that comes with it.

Even those that can tell the difference between cars made in successive production years would be challenged to differentiate the DS220j from the NAS box it replaces. Except for the model number printed on the front face, externally the DS220j is practically identical to the DS218j that came before it, and even the DS216j before that.

The Synology logic is that there isn’t anything significantly wrong with this design, and tooling costs are high, so why change it? The bigger changes are on the inside, and we’ll cover those later.

To mount drives, you must slide one half of the plastic case away from the metal cradle that holds the motherboard and drives. Once the case side has been removed, the owner has easy access to the drive cradle to mount either 2.5in or 3.5-in drives of their choice.

With 15TB drives available now, and larger capacities coming, it is possible to have massive amounts of data stored on a DS220j, even if you use drive mirroring.

It’s very simple to install drives, and most users will only do this once anyway. Screws are included to hold the drives firmly in place, and only a few are needed. Four screws are in the box, which is plenty to avoid them shifting if the DS220j is handled.

For testing Synology kindly included a single Toshiba N300 4TB hard drive, that’s designed specifically for NAS use and comes with a three-year warranty. The retail DS220j comes without any drives unless you buy a model that has pre-installed storage at an additional cost.

Once the drive or drives are installed, power can be attached with a small laptop-style PSU and a LAN cable, and the installation of the DSM (DiskStatioin Manager) operating system can begin. The whole process takes only a few minutes, and all the settings and choices are driven via a web-based configuration wizard.

By default, with two drives the system will default to mirror those drives, but you can reconfigure to use each drive independently, or merge them into a single volume of full combined capacity if you like.

These structural changes need to be made before loading the system with data, as changing the drive layout will often require the existing structures to be removed.

But for those unfamiliar with Synology hardware, the revelation of Synology DSM is the sheer number of applications that you can load and launch once you are up and running.

These include a very wide range of services, tools for backing up, development platforms, security solutions and a dozen other useful functions. For those unsure of an investment in a Synology NAS, it might be worth looking at the apps available for the machine they intend to purchase and see if they include the ones that will be most beneficial.

Other NAS makers have made great strides in improving their application infrastructure, notably QNAP, but Synology is still the leader in providing the best supported and most flexible NAS platform.

The headline story is that where the DS218j used the Marvell Armada 385 dual-core 1.3 GHz procesor and 512MB of DDR3, the DS220j gets the dramatically better Realtek RTD1296 quad-core 1.4GHz, and DDR4 RAM of the same capacity.

These upgrades makes the system board in the DS220j practically identical to that in the DS420j, but with only half the RAM. Logically, this machine will only be supporting two hard drives internally, so does it need extra memory?

It doesn’t if you only use it for file serving, but if you use a wider selection of applications, the extra memory is necessary to exploit the four-core CPU fully. Without it, those additional cores can’t effectively be utilised by simultaneously running apps without running short on memory.

But, if it did, then the DS220j might well tread on the toes of other, more expensive models in the Synology DiskStation range.

From a technical perspective, the Realtek RTD1296 is capable of 4K video transcoding. Or, it could be with 1GB of RAM. With 512MB it isn’t, purely because of the workspace needed for those calculations to happen fast enough for fluid playback.

That’s mildly frustrating for those that want that feature and don’t fancy paying for a ‘Play’ model or waiting for the DS220+ model to address the RAM deficit.

With more CPU cores at a higher clock speed and a memory type with inherently greater bandwidth, both read and write performance is enhanced. But write performance that showed the greatest improvement in our testing.

However, the difference is small because the real limit of network performance of this machine is Gigabit Ethernet bandwidth. Where the DS218j could achieve 110MB/s read speeds, the DS220j only betters that by about 5MB/s more, before it runs into the practical limit for LAN speed. Writing improves from around 90MB/s to about 110MB/s, a bigger proportional improvement.

How much data you write to the system will determine how much help this extra boost is worth, but the CPU upgrade is a bigger change than we’ve seen on some new Synology models.

These numbers hint at a significant challenge for Synology when they arrive at the DS222j in a couple of years, as network performance won’t improve whatever CPU they switch into this familiar case.

We experienced a degree of déjà vu while reviewing the DS220j. Many of our concerns about the upgrades parallel those we had in respect of the DS420j and its DS418j predecessor.

That said, the upgrade the to the processor and memory is much more significant here and delivers a positive impact on write speeds when file serving. What’s less wonderful is that they increased the CPU power without increasing the amount of RAM needed to balance those enhancements accordingly.

We understand why Synology did this, but neither the DS220j nor DS420j is well balanced in respect of CPU power and memory capacity.

Overall, the DS220j is a significant improvement over the system it replaces and competitively priced for a product from this maker. It might not justify dumping an existing DS418j over, but for anyone sourcing their first dual-drive NAS, the functionality packed into this one is very hard to ignore for the price.