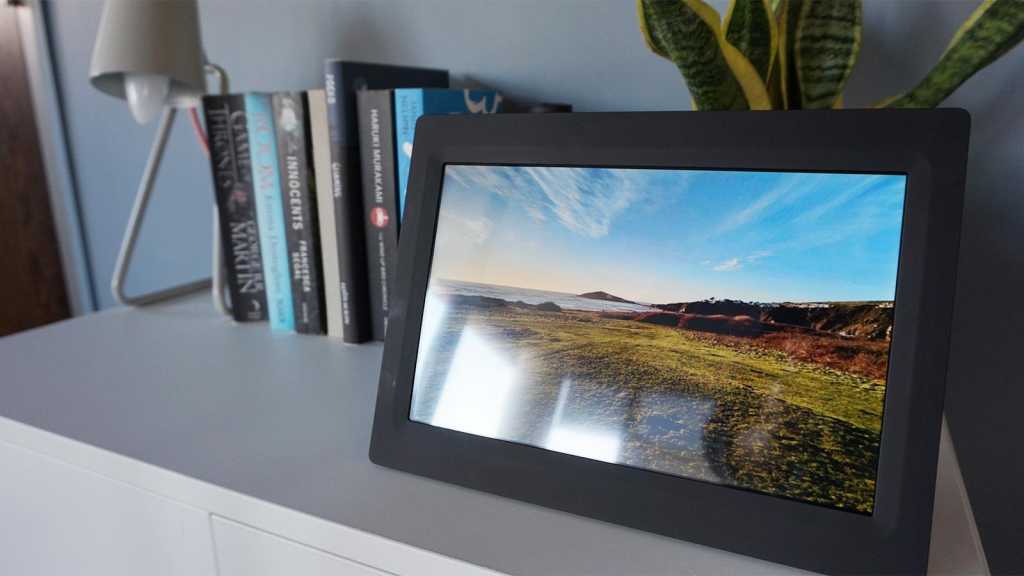 The 10in touchscreen Sungale Cloud frame boasts attractive features like a 4000mAh battery and social media connectivity. Yet it also feels very much like a budget tablet. Poor picture quality and slow performance – along with a dated user interface on both on the tablet and app – make the Sungale difficult to recommend, especially when you can find better products in a similar price range.

We review the Sungale CPF1051+ Cloud Frame which comes with a 4000mAh battery, 20GB cloud storage and 16GB internal storage. It’s ambitious, with social media connectivity, but struggles in a few areas. Here’s what it does well and what it could do better.

The Sungale CPF1051+ costs $139.99 with availability mostly in the US. You can pick it up from Amazon where it’s available in black, white and wood finishes. UK shoppers can ship it from Amazon US.

We’ve reviewed other digital photo frames too – see the best ones in our chart.

The best qualities of the Sungale Cloud frame is it’s light and thin, much like a traditional photo frame – so you could pass it around to visiting guests if you wanted to show off holiday snaps. The black matte border looks neat, though a little bland – but you can pay slightly more and opt for a wooden finish instead.

Inside the frame you get a 4000mAh battery, which means you can display it anywhere in your house. The frame comes with a removable stand which screws into the back. You’ll also find a volume rocker, audio out port and power button on the side along with speakers.

The Sungale Cloud charges via MicroUSB which is included, along with a power block that plugs straight into the wall. UK users would need a US to UK power adapter though.

The frame also supports MicroSD cards, so you can top up the 20GB cloud storage and 16GB internal storage with more memory if you needed it.

The frame isn’t far from a tablet. In fact, that’s essentially what the Sungale is: a budget Android tablet.

In a nutshell: the Sungale Cloud frame attempts to do too much. With just 1GB RAM the device acted slowly and unpredictably, failed to install Instagram on multiple attempts, and stuttered on an image in slideshow mode (though this only happened once). The frame also hesitated when switching from one operation to another.

The free Sungale Cloud app (for  iOS and Android), which is what allows users to add images and adjust frame settings, was similarly slow – and the UI simply looked outdated. The app logged out whenever we switched to a different app on our phone.

Let’s be clear: we would have forgiven these shortcomings if the picture quality compensated. It didn’t.

For $139.99 the display underwhelms. The IPS panel supports a 1280×800 resolution, which is the lower end of the HD spectrum – and it’s apparent (especially when most tech users are spoilt with super high-res phone and tablet screens). Colours on the Sungale Cloud frame look patchy and striated and images lacked detail and vibrancy – even when the frame was turned up to full brightness.

We wanted to like the Sungale Cloud. It’s portable, battery-operated and offers social media connectivity – but these other pre-occupations with connectivity distract from the main intention: delivering the best possible picture quality.

At $140 (around £108) it won’t break the bank, but the poor picture quality and software performance make it difficult to recommend when you could pay a little more and get a better frame.