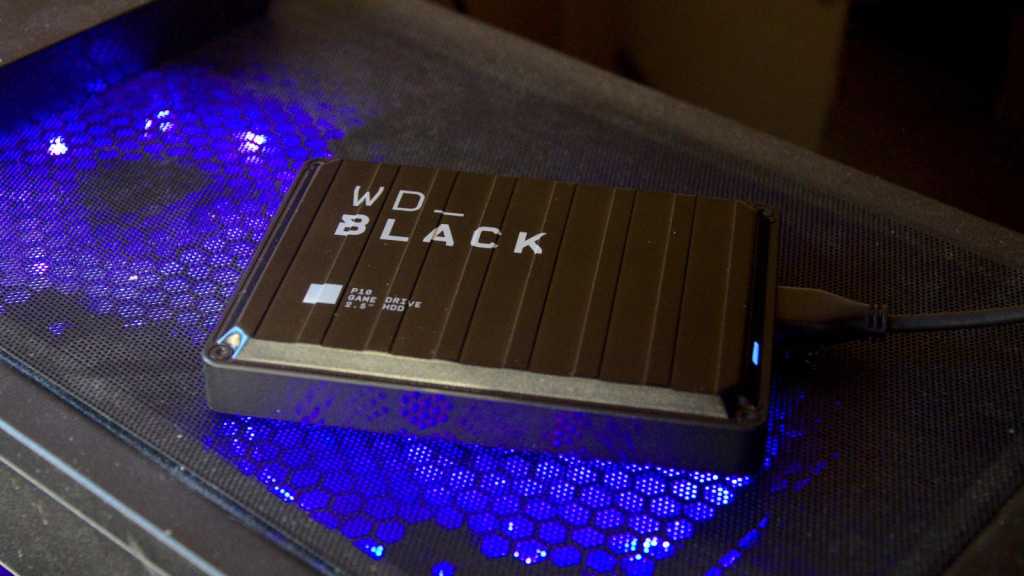 An attractive and practical external drive that should provide console and computer owners with overflow capacity for games and data. But for the most part, this is a conventional hard drive that placed in a moderately interesting enclosure at an acceptable price.

Western Digital has been making external drives under the My Passport name seemingly forever, but a few years ago made its first gamer focused devices for console owners. Its new WD Black P10 Game Drive is an agnostic solution aimed equally at Xbox, Playstation and PC gamers, that aims to provide them with plenty of extra capacity to supplement what’s already in their systems.

With up to 5TB of capacity, has the P10 got enough space to warrant a tactical investment?

American customers experience more aggressive pricing with the 2TB drive being only $79.99, and the bigger drives being $119.99 for the 4TB and $129.99 for the 5TB option. You can buy one direct as well as Amazon.

Whatever region you are, those prices easily makes the 5TB model the best value per TB, and the 2TB the worst.

If you specifically are looking for external storage for the Microsoft Xbox One, you should be aware that Western Digital also makes a WD Black P10 Game Drive for Xbox One that comes in 1TB, 3TB and 5TB capacities.

The pricing of the 5TB version is the same as the general P10, but each of this series comes with a 2-month Xbox Game Pass Ultimate membership included.

Check out our chart of the best portable hard drives and SSDs.

The inspiration for the WD Black P10 are those robust boxes that the military uses to ship equipment, or it might be shipping containers.

The exterior of the enclosure has ridges on it, a feature designed to make metal structures stronger, but it’s mostly plastic and the only external metal part is the top. Some external drives, like the Samsung T7 Touch, use an entirely metal skin, but the construction budget didn’t stretch to that sort of extravagance here.

At each corner is a T8 security bolt that appears to hold the top on, although we removed these and it didn’t come free. Eventually, after some delicate prising, we concluded that further investigation of the internals would involve damage, and so we restrained our curiosity. 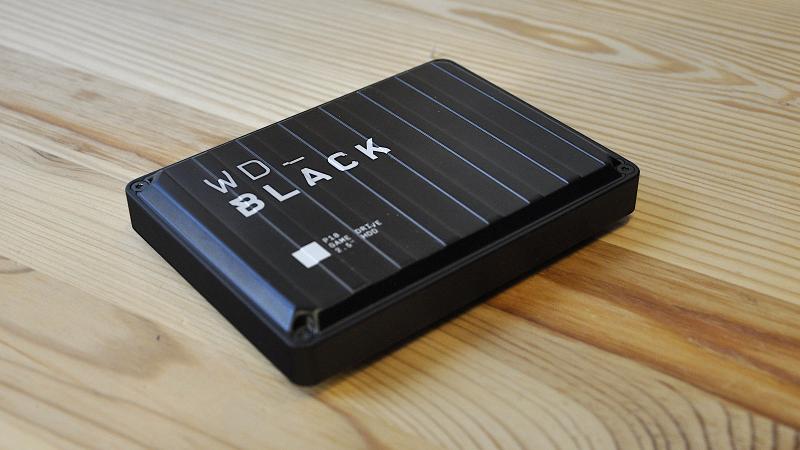 The rest of the design might be best described as an external hard drive by the numbers. Included with the P10 is a 40cm long cable with USB-A connector on one end and a USB 3.0 Micro B blade on the other. Western Digital didn’t use USB-C, but as this isn’t an external SSD how it connects is largely irrelevant because it doesn’t use all the bandwidth of USB 3.0.

The only other notable feature is a small white LED that illuminates to show the drive is powered and active.

One odd aspect of this design is that nowhere obvous on the drive does it mention the capacity of the unit. Therefore, should you have two of these of differing capacity, you’ll need to mark them yourself. Or, memorise the different part numbers, and read the microscopically small label text on the underside.

There isn’t much more to say about the outside of the Black P10. It’s a USB drive that will work with a console, PC or Mac, as most people would expect so lets take a look at the performance.

The review hardware we asked to see was the 4TB model, but the differences in performance between this and its counterparts are mostly the capacity. The 2TB version is marginally thinner, but the two larger drives are physically identical.

Each drive comes preformatted in the exFAT structure, allowing it to be plugged into an Xbox One, PS4, PC or Apple Mac and used without delay. It’s possible to format it to whatever layout is convenient on a computer, such as NTFS. And, although WD don’t explicitly say as much, we’re confident it could be used with a Linux format if needed.

Because it isn’t meant for a specific function, the drive doesn’t come with any software. 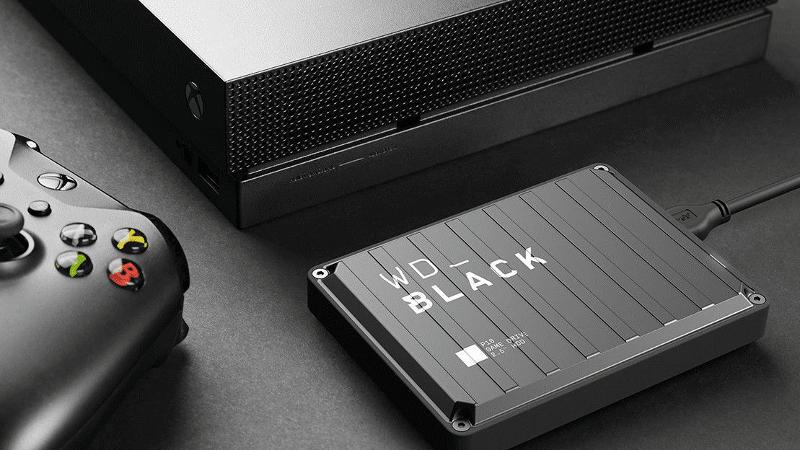 Western Digital promotional material mentions the ability to store up to 125 games on console and PC for the 5TB model and based on that prediction the 4TB should hold 100.

But those numbers don’t reflect the very wide range of size that games can be, and therefore shouldn’t be assumed to be guaranteed for any combination of titles. In our opinion, the 4TB or 5TB drive should hold more games than most people play on a regular basis, even if someone exists who might contest that assertion.

In testing the Black P10 delivered a better than expected 130MB/s read and 127MB/s write speeds, which compares favourably with a typical read and write performance of a WD My Passport at around 110MB/s.

These results aren’t as fast as a bare WD Black 2.5in 4TB drive connected by SATA, but the reduction with USB introduced to the data pathway is not unexpected. An external SDD could be at least three times quicker, but it would also cost at least four times as much. 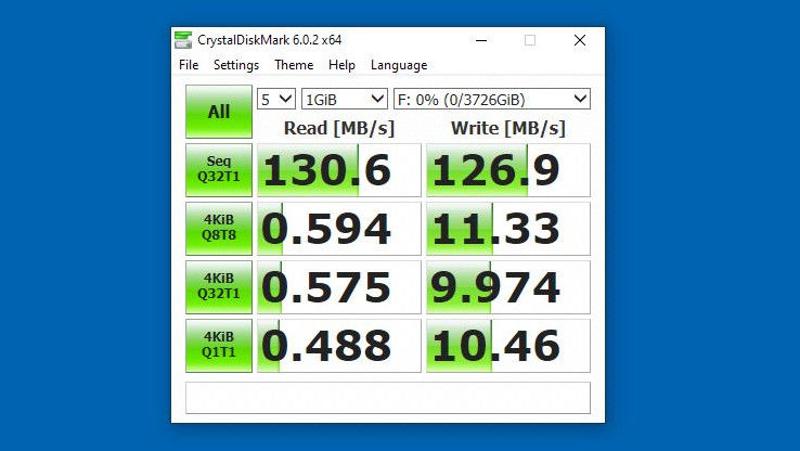 The major competitor for this device is the Seagate 4TB Game Drive that if you choose the Xbox model comes with a 2-month Xbox Game Pass (a single month on the 2TB drive). There is also a PS4 model, both are slightly cheaper than the P10 4TB, and they are slightly quicker with 140MB/s read speed.

However, they only come with a two-year warranty, not the three that the P10 offers.

The styling of the WD Black P10 is interesting, but it doesn’t impact much on the critical functionality inside.

And, if you strip away that shipping container appearance this is a quick 2.5in hard drive in a USB 3.0 enclosure, or USB 3.2 Gen 1, as this interface is now rebranded.

The drive inside is a more rapid model than the ones used in other WD My Passport products, but we are only talking a little faster and not anything approaching SSD level speeds. The cost of a 4TB external SSD would be much greater, making the P10 a good compromise between price and performance.

More of an issue for the P10 is the other Western Digital external drives and the Seagate gaming drives. The current My Passport series that are offering the same capacity for much less money, as is Seagate – under £100/US$100.

Where this unit stands out is that it offers a 5TB option, bigger than the regular My Passport capacities – and this is where the P10 offers the best value.

Overall, the WD Black P10 is an external drive that looks like it was built for gaming, rather than general-usage storage. And, if capacity and appearance are important, then the WD Black P10 Game Drive is certainly fit for purpose.