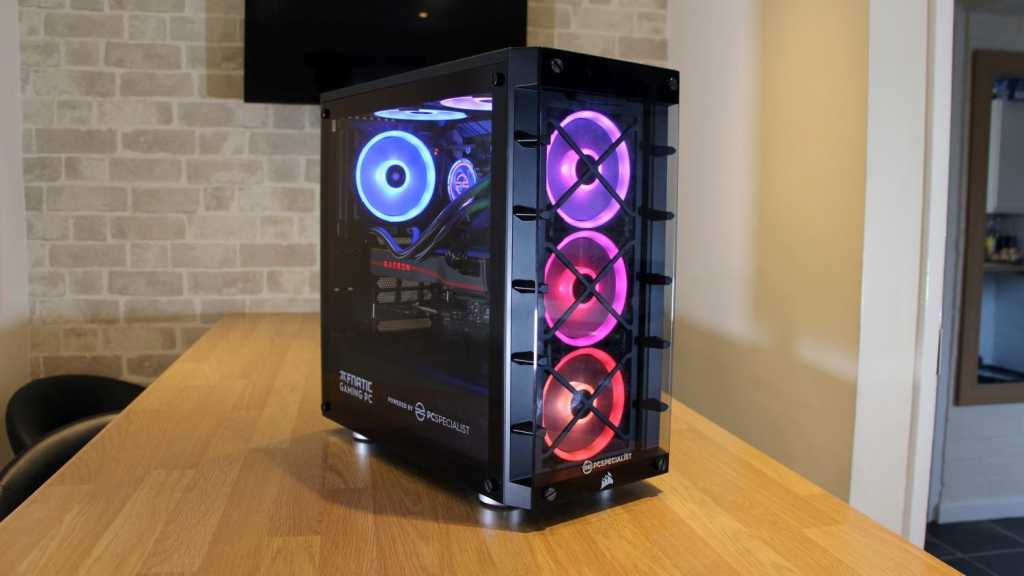 This Fnatic-branded system is fast in games, very quick in applications and has a great specification alongside smart, consistent design. It’s a little expensive and Nvidia-powered rigs are a tad quicker, but there’s still plenty to like here.

This PC is one of the most exciting additions to the market in some time – because it’s the official desktop of Fnatic, one of the world’s biggest esports teams.

The PCs have Fnatic’s famous branding, and they’re built by PC Specialist, which has won plenty of awards in the past for its systems. Conversely, branded products are often too expensive when compared to rivals – and that might be the case here.

The model reviewed here is the flagship of this new range, and it uses an AMD Radeon RX 5700 XT, a Ryzen 7 3700X processor and 16GB of memory. It’s the system that Fnatic will be sending to its own pro players. It costs £1,599, and is available from both PC Specialist and Currys PC World.

Check out our chart of the best gaming PCs to see what else is available.

Fnatic and PC Specialist have picked a Corsair chassis for this build. The iCUE 465X is a sturdy, attractive mid-tower case with tempered glass panels, and it looks the part thanks to a trio of RGB LED intake fans alongside smart PC Specialist and Fnatic logos.

The cabling is very neat, and PC Specialist’s own FrostFlow CPU cooler sits on the exhaust mount and tops off the CPU with a smart ring of chrome. The motherboard’s spare M.2 connector and memory slots are all easy to reach. There are more upgrade paths at the rear, with four 2.5in mounts and a single free 3.5in bay.

The Corsair case is robust, good-looking and has solid upgrade options, but PC Specialist’s build isn’t flawless. We’re a little concerned that the exhaust fans in the roof will deprive the CPU cooler of cool air. Those extra fans also mean there are no free connectors on the RGB control board at the rear.

At the front, the AMD graphics card blocks the SATA ports – you’ll have to remove the GPU to add storage there. The Corsair’s modest dimensions also mean that the bottom of the motherboard is cramped and installed right alongside the PSU shroud – and that the top of the board is blocked by fans.

The case is 455mm tall, which makes it larger than its closest rivals. The £999 AlphaBeta i5 RTX uses its own chassis that’s just 380mm tall, and it has a handle and a USB Type-C connection at the front – but has fewer upgrade paths on the inside.

The Fnatic’s gaming grunt comes from the AMD Radeon RX 5700 XT. This Asus-made GPU has 2,560 stream processors and 8GB of memory, and it runs at its reference speeds – which means a Boost clock of 1,905MHz.

The Ryzen 7 3700X runs at its stock speeds, too, but that’s no bad thing: it runs at solid base and boost speeds of 3.6GHz and 4.4GHz. It has eight multi-threaded cores, which means ample scope for work and play.

The Asus ROG Strix B450-F Gaming motherboard has two spare memory slots and one free M.2 connector, and it also has beefed-up ROG Ethernet and a good audio chipset. At the rear, it’s got a USB 3.1 Type-C port and seven full-sized USB ports of varying speeds.

The motherboard isn’t a top-tier AMD part, though, which means it doesn’t support dual-graphics or faster PCI-E 4.0 SSDs. Specs are rounded out by 16GB of 3,200MHz memory, a 500GB Samsung 970 EVO Plus SSD and a 2TB hard disk.

PC Specialist has fitted the rig with dual-band 802.11ac wireless, but no WiFi 6 (11ax). The Corsair TX650M power supply is good – semi-modular and with an 80Plus Gold certification.

The Fnatic’s big rivals include Nvidia hardware that can handle Ray-Tracing and DLSS. The AlphaBeta machine uses an RTX 2070 Super alongside a six-core i5-9600KF CPU and 16GB of memory, but ihas a weaker Crucial MX500 SSD, a poorer motherboard and no hard disk.

The MSI machine uses an RTX 2060, a six-core i5-9400F processor, 16GB of memory and a 256GB SSD alongside a 1TB hard disk, but its mini-ITX construction means few upgrade paths and a weak motherboard.

The Fnatic has a good specification, and it delivers good gaming speed – but it doesn’t always outpace the competition.

We ran Warhammer 2, Ghost Recon: Wildlands and Deus Ex: Mankind Divided at Ultra settings and at 1080p, and this machine returned averages of 90fps, 65fps and 88fps. Those are great scores, but the AlphaBeta machine with its RTX 2070 Super scored 95fps, 70fps and 94fps in the same tests.

When we upped the resolution to 1440p the Fnatic returned averages between 55fps and 65fps. That, again, is good pace that can’t quite compete – the AlphaBeta machine hit 60fps in all of those games.

The Fnatic may not be able to keep up with that machine, but it’s hardly slow. It flew past 100fps in these tough games at 1080p and at lesser graphical settings, which means you’ll be able to play triple-A titles at a smooth 60fps and esports games at the framerates required for 144Hz and 240Hz displays.

This PC will also play 1440p titles well, with ample pace for single-player games and esports at this tougher resolution. You’re only going to have to dial graphics settings back here if you want to run some games at triple-figure framerates.
The Fnatic will only play smoothly at 4K or on VR headsets if you dial back the graphics settings in the vast majority of modern games.

Happily, the Fnatic easily outpaced its other rival – the MSI Trident A, with the RTX 2060 GPU. The Fnatic rig’s result of 90fps in Warhammer 2 is 25fps beyond the small MSI.

The Fnatic is also marginally quicker than the PC Specialist Vulcan S2 in gaming tests. That machine is our current PC gaming favourite, and it included an older RTX 2070 graphics card.

The Fnatic’s CPU is the star of the show. The eight-core Ryzen chip delivered a Geekbench result of 29,378, which is at least 7,500 points beyond the Intel Core i5 silicon in both rivals.

There’s easily enough power here for video-editing and photography work alongside gaming, and boot and game loading times are always rapid thanks to the SSD’s read and write speeds of 3,062MB/s and 2,919MB/s.

The Fnatic is good thermally. The CPU and GPU peak temperatures of 68°C and 71°C are fine – which makes this rig a better bet than the AlphaBeta, which had a CPU that peaked at a dangerous 99°C.

It’s a reasonably quiet machine, too. Speakers or a headset will easily mask the noise. It could have been quieter, though – those temperature results prove the two extra roof fans are not necessary.

This Fnatic-branded PC is impressive in several key departments. It has the pace for 1080p and 1440p gaming and high refresh-rate esports, and way more CPU power than its rivals.

The motherboard, memory, storage and power supply all outstrip the competition, too, thanks to better speed and more features throughout.

It’s not perfect: the AMD GPU is a little slower than the RTX 2070 Super, which also has Ray-Tracing. The Fnatic PC is also a little expensive – you could get similar gaming power for less, albeit without some of the finesse elsewhere and without the Fnatic branding.

If you’re a Fnatic fan and you’re after a new gaming PC, it’s a no-brainer. Even if you don’t follow the team, though, there’s no denying the quality of this machine – it’s fast, well-built and well-balanced, and it’s a worthy award-winner.