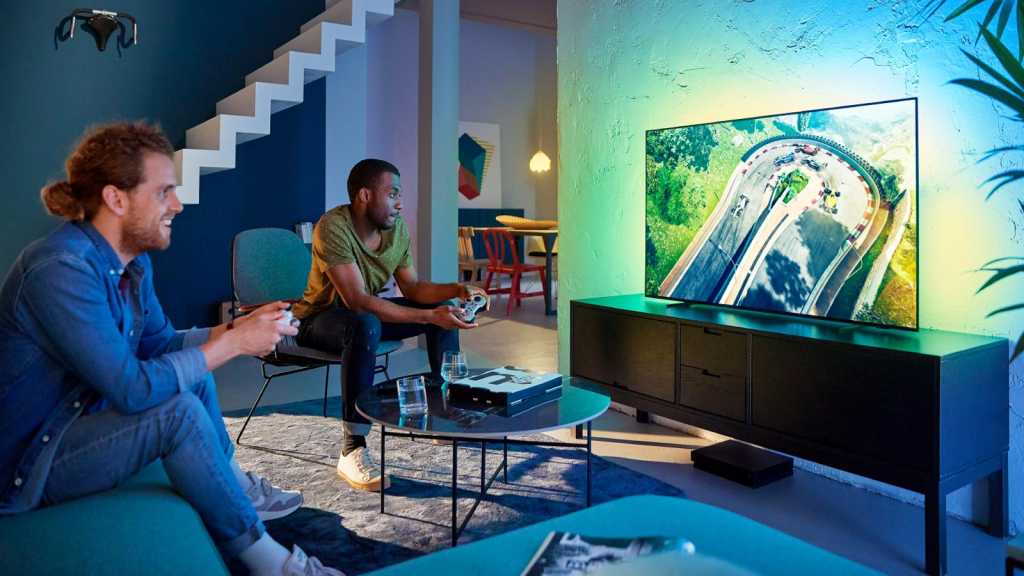 The Philips OLED754 offers a near premium 4K TV experience for a good deal less than flagship rivals. Slick design, super video quality for the price, and crowd-pleasing Ambilight, will have you wondering why you need to spend more.

Providing a (relatively) in-expensive entry point for 4K HDR OLED, the Philips OLED754 could be the model to finally persuade 1080p holdouts to improve their image.

The catch is that the set uses the brand’s second gen P5 processor, rather than the third gen found on its top-flight 2020 screens, as well as a stripped back smart OS, namely the Linux-based Saphi platform, rather than the latest Android Pie OS.

We’re told the smaller model will be available for £990 though, which undercuts LG’s OLED55B9 entry-level model, at £1299, which lacks Ambilight, and the breadth of Philips HDR support. It a lot cheaper than the Sony Bravia AG9.

If you see it at that price, it’s currently as cheap as a 55in OLED goes. Check out the  best TVs we’ve reviewed and ranked.

As we’ve come to expect from Philips, design is distinctly minimal. The panel, with its ultra-slim bezel, sits on a pair of edge-placed feet. There’s virtually no gap between the panel and these boots, so you’ll not be able to park a soundbar in front.

The finish is classy though, with a brushed metal look to the back of the panel. Rear connections comprise four HDMI inputs, all of which support 4K HDR at up to 60Hz.

The remote is a little more rudimentary. A standard black plastic zapper, it ships with dedicated buttons for Netflix and Rakuten TV.

It may be basic, but we suspect most users will be quite happy with the Saphi smart system. It’s uncluttered and all the main streaming apps are present, including Netflix, Amazon Prime Video, Rakuten TV and YouTube. A Freeview Play tuner means it comes with well integrated catch-Up TV players too.

Ambilight is a winner. Able to integrate with a Hue smart lighting system, it looks superb with sports and while gaming. For movies we’d recommend using a solid colour wash, otherwise it’s too distracting.

On-board HDR support is excellent (rivalled only by Panasonic). Not only is the 754 compatible with Dolby Vision, but also HDR10+, the dynamic metadata upgrade for regular HDR, favoured by Prime Video. It’s also ready for HLG, the broadcast HDR standard.

HDR performance is pretty good. We measured HDR peak brightness at over 600cd/m2 (aka nits) using a 10% measurement window. This rises to in excess of 700nits with a 5% window, which is more reflective of real world HDR grading.

Contrast and dynamics are good.

Sonically, there’s no provision for anything other than standard stereophonic down-firing drivers, with a woofer and passive radiator on the rear to flesh out the lower mid-range. It’s serviceable but nothing more.

If there’s a better value OLED performer around at the moment, we haven’t seen it. Offering bona fide dynamics, rich colours and nuanced textures, it ticks all the right boxes with both native 4K content and upscaled HD.

LG’s B9 is slightly more expensive, and has a superior smart OS, but lacks HDR10+ support, and most obviously, Ambilight.

We think you’ll have to spend considerably more to get appreciably better AV performance. Consequently, we rate this Philips a great buy for those looking to upgrade to 4K from 1080p, or seeking a versatile display as part of a larger home cinema system.

The caveat is generally sluggish navigation and that stripped back smart OS.